Post-apocalyptic ‘Fallout 4’ is a deep and satisfying adventure 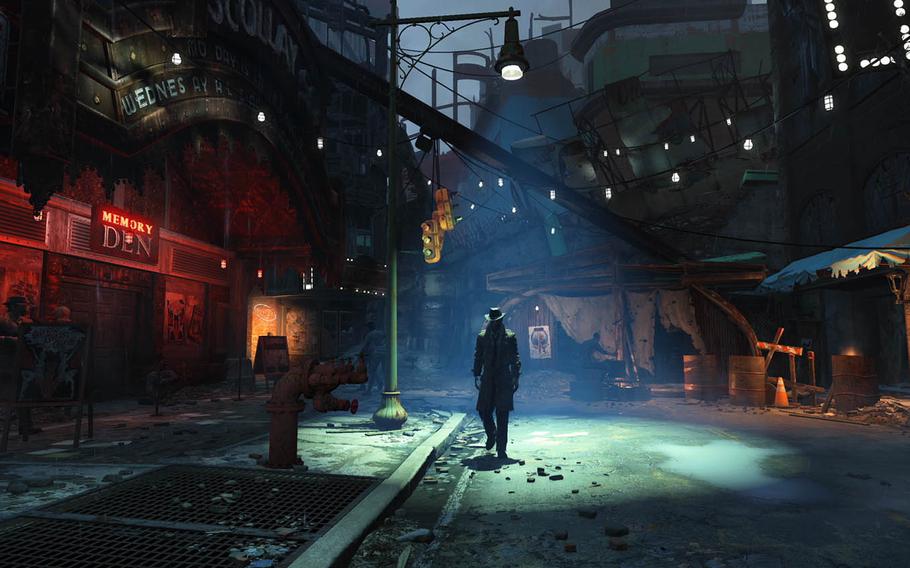 “Fallout 4” is set in a post-apocalyptic Boston, 200 years after a nuclear war. In this latest entry, Bethesda takes customization to another level with the addition of a voice for your character. (Bethesda)

“Fallout 4” is set in a post-apocalyptic Boston, 200 years after a nuclear war. In this latest entry, Bethesda takes customization to another level with the addition of a voice for your character. (Bethesda) So says the narrator of each “Fallout” game. Fortunately, Bethesda’s post-apocalyptic series always changes and keeps getting better.

“Fallout 4” starts in the pre-Armageddon home of a young couple living in the Boston area. Here, you create a character by choosing a gender, molding a face and selecting a name. The creation tools are very thorough and permit a good degree of artistic freedom. However, what longtime players will appreciate most is the addition of a voice for your character. Previously, wasteland wanderers were silent. Adding vocals makes the game more realistic, immersive and enjoyable.

Almost as soon as you’re finished creating your hero, nuclear bombs start to fall on Boston and you rush to the local Vault-Tech fallout shelter with your spouse and infant son, Sean. Upon arrival, you and the other vault-dwellers are herded into cryogenic pods for a long, cold nap.

At some point, the pods are briefly defrosted and you awaken long enough to see someone open an adjacent chamber, kidnap your son and shoot your spouse. Eventually, the entire system malfunctions and you awaken to discover you’re the vault’s only survivor and two centuries have passed since you entered.

You then head out to explore the irradiated landscape and find out what happened to your missing son. You quickly learn that the quest to find Sean is only a small sliver of the adventure awaiting in the wasteland known as the Commonwealth.

The game is immense — with miles of map and countless people seeking assistance or justice. You will spend hours creeping through blasted buildings, abandoned vaults and forlorn settlements looking for loot. You’ll encounter — and usually kill — mutant animals, mindless ghouls, vicious raiders and a wide variety of other nefarious characters. Overall, it bears a strong family resemblance to previous “Fallout” games, as well as Bethesda’s other open-world franchise, the medieval fantasy “Elder Scrolls.”

The action unfolds within a set of interwoven stories that are compelling — especially by the standards of open-world adventure games. As you follow the threads, they will twist, turn and even branch as you’re given choices about the course to take. You’ll discover strands of greed, conspiracy and madness. But you’ll also discover hope.

Some of the biggest sources of hope are the settlements you can establish and maintain. In the past, you helped society by ridding the wasteland of bad guys or completing noble quests. This time around, you can literally rebuild society by erecting small villages and encouraging agriculture and trade.

The building process is somewhat complex. Although most settlement areas include some form of shelter when you find them, you need to provide resources — food, water and power — as well as defenses against raiders. You also need to furnish each building and to build additional dwellings from scratch as your settlements expand. Unfortunately, instructions can be inadequate and I have wasted time and resources learning the process through trial and a lot of error. However, it’s very rewarding to see your villages grow in population and happiness.

Bethesda has tweaked a few of the game’s mechanics to make combat more fluid, exploration less tedious and crafting more efficient. These moves allow players to focus on what’s most fun.

For example, an efficient use of the controller’s D-pad allows you to quickly swap weapons in the middle of a firefight. As a result, battles are more energetic and exciting. And you no longer have to click on every box, cabinet and drawer to see what’s inside when you’re looking for loot. You simply move the aiming retinal over the item and it lists the contents. It might not seem very realistic, but it dramatically cuts the time you spend on this dull-but-essential task.

“Fallout 4” also makes some welcome changes to the way gear is treated. In the past, weapons and armor degraded with use and you needed to repair them frequently using parts from similar items. This time around, gear is stable no matter how much you use it. And you can use crafting sites to upgrade weapons to make them more lethal and armor to give it special properties.

The graphics are very realistic, with plenty of detail and texture. However, they aren’t exactly leaps and bounds beyond what was available in “The Elder Scrolls V: Skyrim,” which was on the previous generation of consoles. In addition, animations can be a bit stiff.

The game earns a mature rating for violence, exploding bodies and some vulgar language.

Bottom line: A “Fallout 4” is one of the deepest and most satisfying open-world games available.

Bethesda provided a review copy of the game.