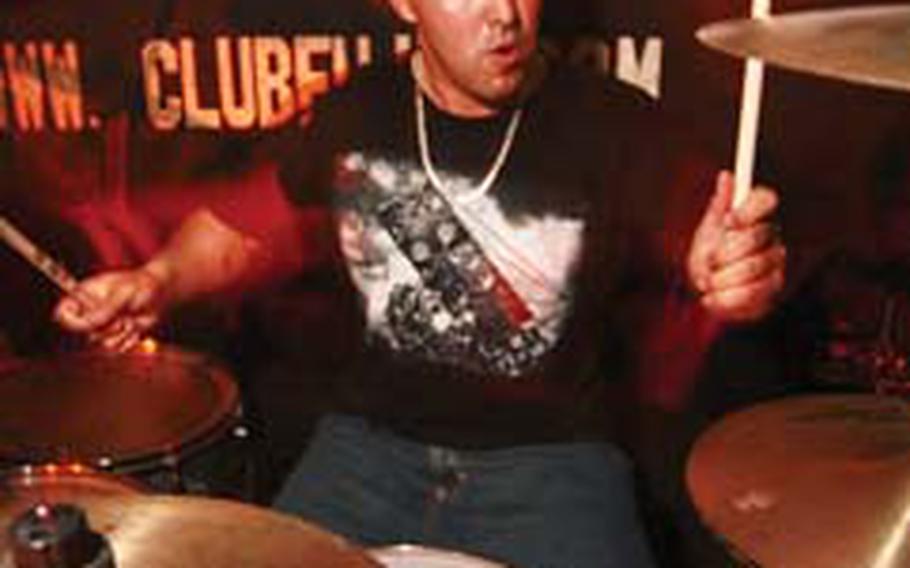 Beyond the Ruins drummer Tony Diaz provides the beat during a gig at the Okinawa City&#39;s Club Fujiyama. Diaz, a Marine corporal, is now serving in Afghanistan. (Photo courtesy of Andy Stetson)

Beyond the Ruins drummer Tony Diaz provides the beat during a gig at the Okinawa City&#39;s Club Fujiyama. Diaz, a Marine corporal, is now serving in Afghanistan. (Photo courtesy of Andy Stetson) 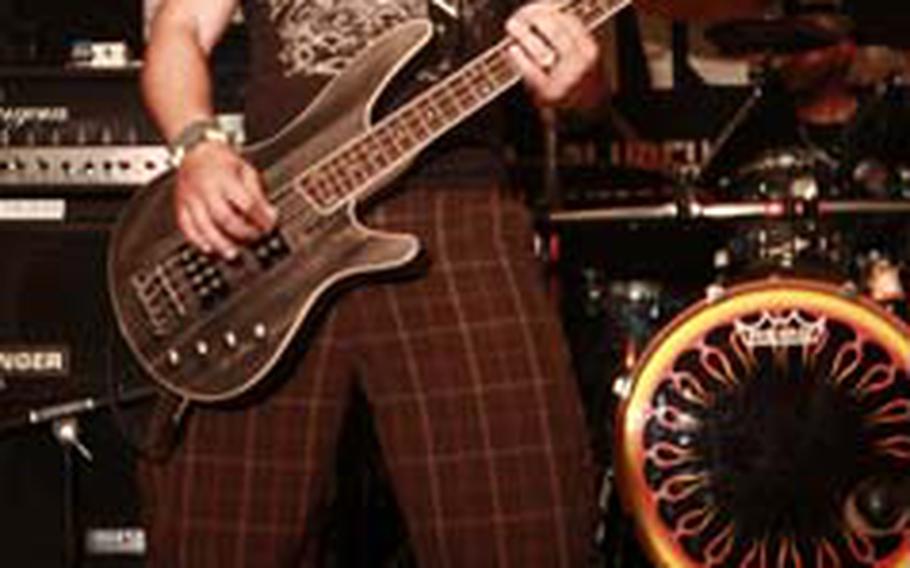 Jason O&#39;Hearn lays down the bass vibes at a "Beyond the Ruins" show at Club Fujiyama on Okinawa. (Photo courtesy of Andy Stetson) 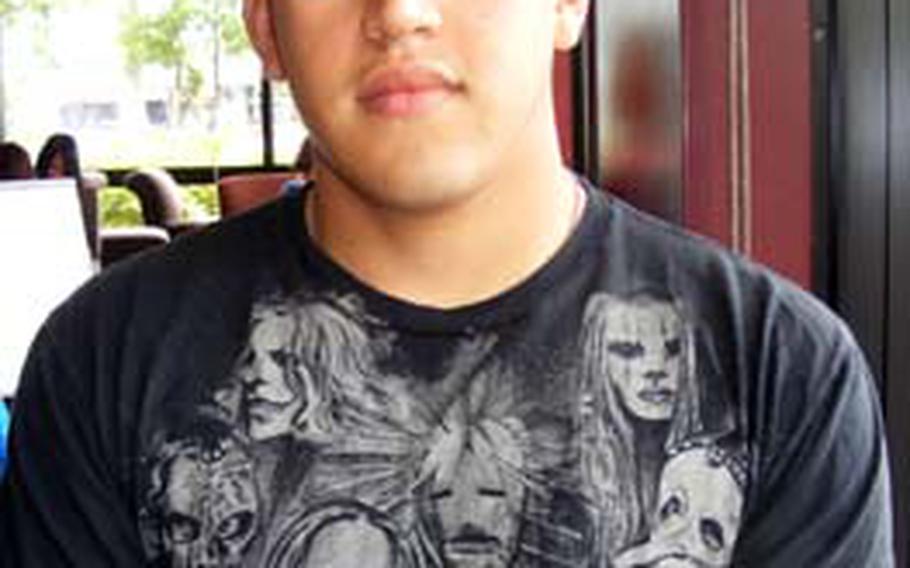 Mencho Cantu is the lead singer for Beyond the Ruins, a metal thrash band that recenty made Playboy&#39;s Top 10 list of military rock bands. Canto, 20, is a corporal assigned to Camp Foster. The band, consisting of five Marines, was the only group on the list that was not an official service "show band." (David Allen/ S&S) 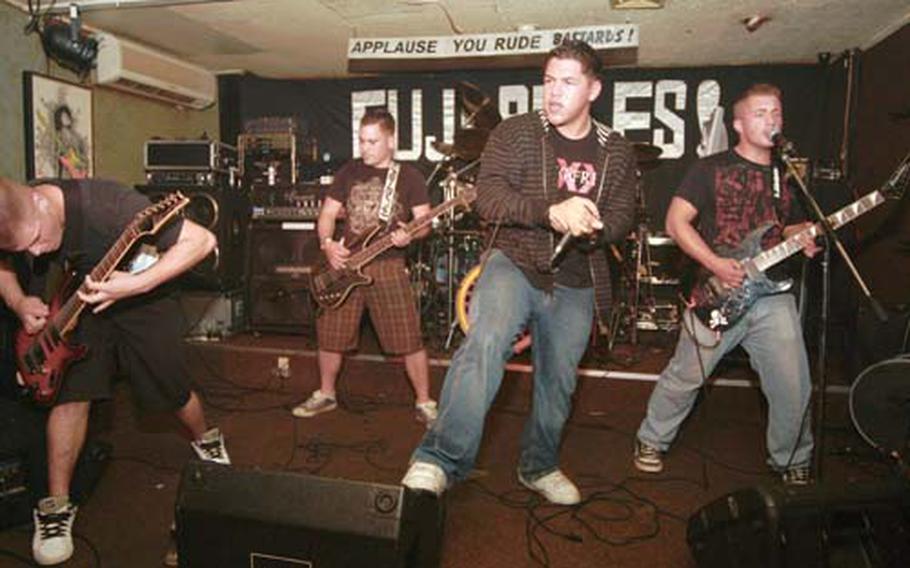 Beyond the Ruins rocks the house at Club Fujiyama in Okinawa City. The band was recently named one of the top 10 military rocks bands by Playboy. However, recent deployments have broken the band up. (Photo courtesy of Andy Stetson) 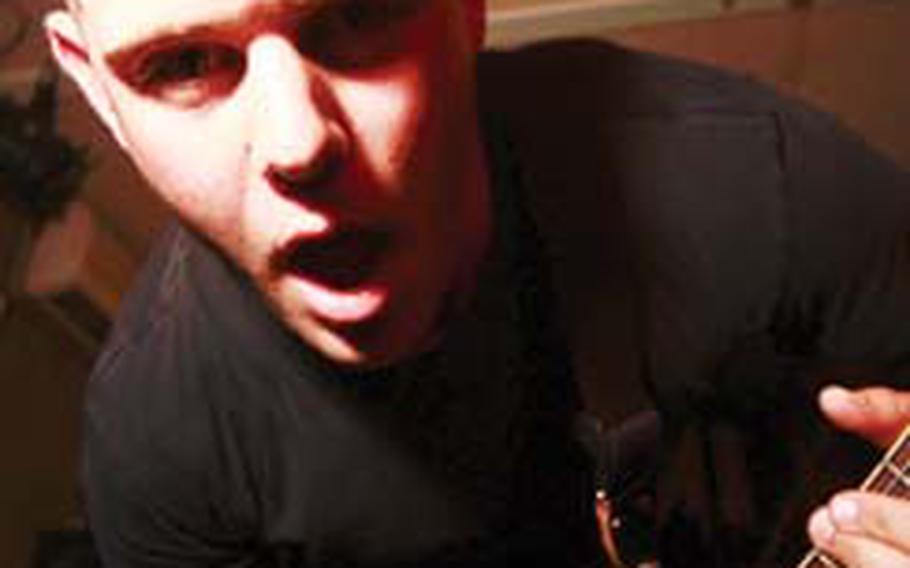 John Sisisch is the rhythm guitarist for "Beyond the Ruins." (Photo courtesy of Andy Stetson)

For almost two years, Beyond the Ruins were the metalcore masters of the Okinawa mosh pits.

By day, they were ordinary Marines. But on Friday nights, they&#8217;d morph, partying like rock stars and playing some of the island&#8217;s biggest clubs.

"Go out, get hammered, and play shows," is how lead guitarist John Brooks described a typical weekend in an e-mail. "[We] made it a point to have at minimum 6 beverages before (and during) a show. Great times!"

It wasn&#8217;t infighting, drug use or inflated egos that tore Beyond the Ruins apart, though. It was the military. Brooks and guitarist John Sisich are now stateside. Drummer Efrain "Tony D" Diaz and bassist Jason O&#8217;Hearn are deployed to Afghanistan. The only band member still on Okinawa is lead singer Mencho Cantu, and his tour ends in four months.

If you&#8217;ve seen "Behind the Music," you know what happens next. Some twist of fate rescues the band from obscurity, makes them relevant again.

That twist came just weeks after their last Okinawa gig, when Playboy named Beyond the Ruins to its Top 10 "Battle of the Battle Bands" list.

"I liked the fact that they are somewhat off the grid," said Jack Boulware, the freelance journalist who wrote the article, in an e-mail to Stars and Stripes. "No other band I featured had their own MySpace page, or pushed to record as many original songs. Also, they seemed to me to be writing and performing music for their peers, not as part of an obligation to soothe the eardrums of admirals&#8217; wives at an official luncheon. Although unleashing them into that scenario, at full volume, would be quite interesting."

The other nine bands on the list are "show bands" of professional military musicians. Beyond the Ruins, on the other hand, advertises itself as "metal hardcore thrash" on its MySpace page. They do covers of metalcore bands As I Lay Dying, Killswitch Engage, Atreyu and System of a Down, as well as about 10 songs Cantu and Brooks wrote.

"Personally, I think the Playboy Article was a really big punch in the face from reality!" Sisich said in an e-mail from San Diego, where he is now stationed. "I knew people loved our music and performance, but Playboy!!??"

Boulware found the band by searching the Web for information on rock bands connected to the military. He was knocked out by the Beyond the Ruins videos he found.

Noah Schachtman of Wired magazine&#8217;s "Danger Room" military blog called the band "five trashing, growling, screeching, shredding Marines" and said that of the 10 bands on Playboy&#8217;s list, "they&#8217;re the only ones liable to get a mosh pit going."

Sisich hopes to get most members of the band back together some day.

"Our future plans are to reunite in California and show Cali what Marine Corps Metal is all about," he said.

Okinawa fans of Beyond the Ruins are already mourning their loss.

"The main thing I like about them is that they are a metal band that you can understand &#8212; at least some of the time," said Andy Stetson, a Marine sergeant stationed on Camp Foster. "It&#8217;s something that I can listen to and enjoy every bit of it, and the energy of their music and shows always pumps me up."

Playboy&#8217;s Web site recently listed 10 rock bands as best in the military in its "Battle of the Battle Bands" feature. Here&#8217;s a rundown of the bands that made the cut: