'Plants vs. Zombies 2:' Find an iPad and plant your fingers here For those few in-between seconds your fingers aren't busy collecting sun or planting things, PvZ 2 has a few more tasks to manage. A few zombies even give off "plant food," a sort of steroids for plants that powers up plants in creative ways. The highlighted green plant in this photo has turned into a pea-shooting machine gunner. (Courtesy of PopCap)

For those few in-between seconds your fingers aren't busy collecting sun or planting things, PvZ 2 has a few more tasks to manage. A few zombies even give off "plant food," a sort of steroids for plants that powers up plants in creative ways. The highlighted green plant in this photo has turned into a pea-shooting machine gunner. (Courtesy of PopCap) 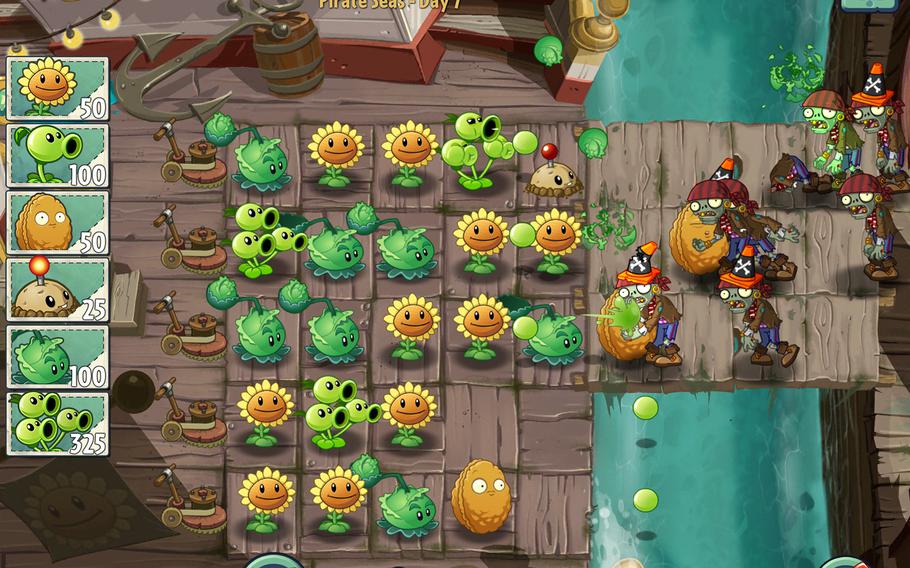 "Plants vs Zombies 2" takes players on a time-traveling journey across the ages, with stops in ancient Egypt, a pirate ship and the old West. (Courtesy of PopCap)

Several years ago, a developers over at PopCap distilled the “defense” genre of games to a simple, green-thumbed essence: There are zombies on my lawn, and this adorable pea plant is going to take them out.

Millions of copies and several platforms later, PopCap has decided it’s about time for a sequel.

“Plants vs. Zombies 2,” a cute defense game spawned from the original that found a home on nearly everything from the PS3 to Blackberry, is finally here. Aptly subtitled “It’s About Time,” this iOS exclusive takes us away from the lawn, backyard and roof. Instead, we’re off on a time-traveling journey across the ages, with stops in ancient Egypt, a pirate ship and the Old West for starters. The most surprising twist of all: This journey doesn’t have to cost you a thing.

That’s because this time around, the game is entirely free-to-play. Anyone with a suitable iPad, iPod touch or iPhone can download and starting planting right now. That doesn’t mean there isn’t money to be spent, however. Players can pay to skip ahead sections of the game, unlock new plants or load up on in-game currency.

Mirroring some of the best pay-to-play games like “League of Legends” or “World of Tanks,” no one has to buy anything to complete “PvZ 2.” The game is riddled with options to either pay for something or unlock that same power by “grinding” (gaming lingo for playing a lot to earn something).

It’s an important gameplay distinction, and it’s a dangerous one, because balancing what players can buy and how much players have to grind is almost as important as the core game experience. If players can buy too much, the game could be ruinously short-lived; made too expensive, and no one makes any money.

Just like it did with the sound of soft, squishy buttered corn plopping against the head of a zombie, though, PopCap nails this perfectly, and the rest of the game grows organically from there.

The gameplay starts as simple as ever, but ramps up tremendously in difficulty. Players buy and arrange plants on their turf to fend off an ever-creeping horde. Sunflowers provide the stuff you need to set down attacking plants in one of six rows, and levels proceed until all the zombie waves are cleared out.

Veterans of the last game will recognize a lot of familiar plants scattered as unlockables throughout the game. Quickly, though, “PvZ 2” starts introducing new ideas. Some of my favorites include boomerang plants (think Bob Marley mixed with deadly aerodynamic dreads), Bonk Choy (fighters that use lettuce fists to knock zombie heads), and flame-throwing Snapdragons. As you progress through the main levels and many side quests, new plants stay with you, even when you go back to fight an older challenge.

That’s really helpful, because while each time-traveling scenario provides a few levels to get accustomed to new zombie types, the game gets crazy quickly. Shambling Egyptian zombies try to steal your “sunshine,” and pirate zombies pop out of rum barrels and shoot out of cannons past your defenses. In the Old West, a piano-playing saloon zombie inspires everyone on the screen to dance a little jig, moving chaotically out of lanes as they do it. Another zombie releases an endless stream of hungry chickens. All of the insanity comes to life with adorable animation and satisfying comical sound effects — not to mention a catchy soundtrack.

For those few in-between seconds your fingers aren’t busy collecting sun or planting things, “PvZ 2” has a few more tasks to manage. A few zombies even give off “plant food,” a sort of steroid for plants that powers them up in creative ways.

Players can also use touch-based attacks for a few in-game coins. Zombies can be picked up and tossed off the screen with the flick of a finger, little zombie heads can be pinched off with a satisfying pop (more cute than morbid, I promise), or the living dead can simply be zapped with lightning. These moves are so powerful they’re more legal cheats than power-ups, but they’re also entirely optional, and give a great way to proceed through the more challenging parts of the game for players who may not be accustomed to fighting crazy chicken-releasing dancing zombie hordes.

“PvZ” was a classic by any standard, but the journey from your lawn, to your pool and eventually to the rooftop was over all too soon. “PvZ 2” fixes that, not only by taking us far beyond the backyard, but by adding challenge modes to nearly every level. Tied with the design choice to make the game entirely free, the touch-screen powers, creative character design and hectic pace build greatly on top of an already beautiful arrangement. “It’s About Time” is worth your time, and this time around you just might be able to save your brains and your wallet.