The “Probe IV” at the museum is powered by an air pump and lets riders experience free-falling. (Jennifer H. Svan / S&S)

The “Probe IV” at the museum is powered by an air pump and lets riders experience free-falling. (Jennifer H. Svan / S&S) A wooden flying contraption inside the entrance to the Misawa Aviation and Science Museum represents the dream of flight in a fairy-tale style, according to a museum guidebook in English. The museum has a gift shop, small restaurant, aviation library and indoor and outdoor park. (Jennifer H. Svan / S&S) 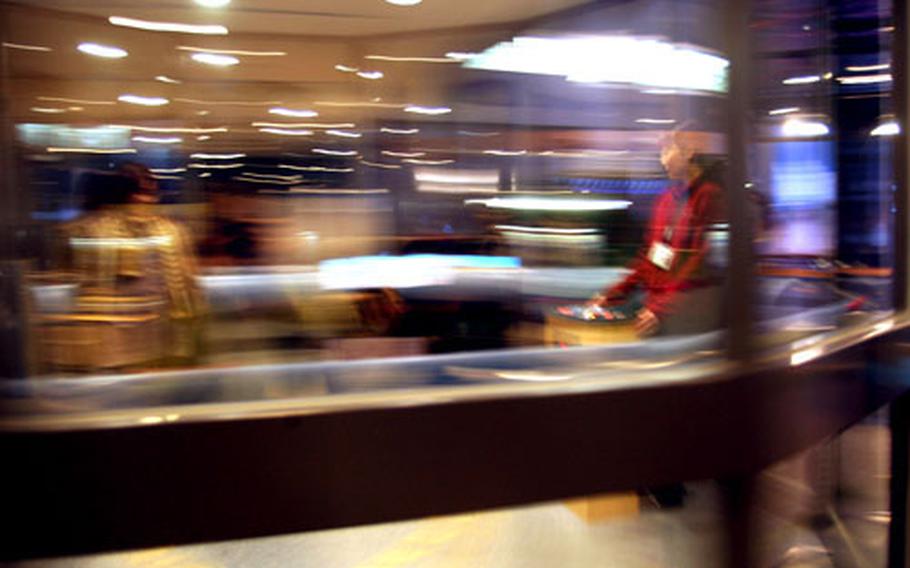 Visitors take a spin and throw a ball in the rotating room at the museum, allowing them to see first-hand the effects of inertia on moving objects. The sign, inset, explains the room. Many of the signs are in English, too. (Jennifer H. Svan / S&S) Adventurous visitors to the Misawa Aviation and Science Museum can strap into this tilting device to feel the force of gravity. (Jennifer H. Svan / S&S) 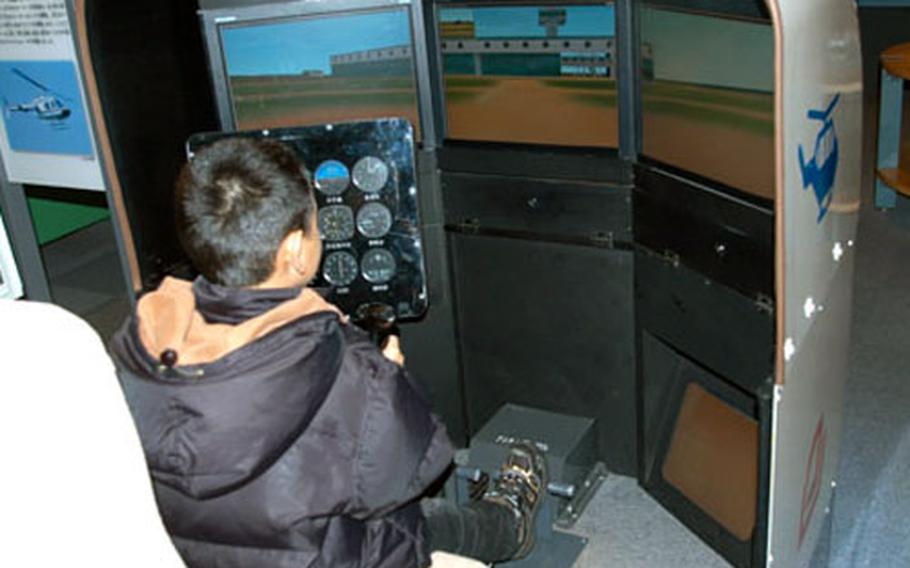 Visitors to the Misawa Aviation and Science Museum near Misawa Air Base, Japan, can take the controls of a simulated HS21 helicopter. The museum is open 9 a.m. to 5 p.m., Tuesday through Sunday. (Jennifer H. Svan / S&S)

One thing is certain. I would never cut it as a pilot.

Never mind that my vision is bordering on bifocal. I could barely stomach a spin in a Cessna flight simulator at the Misawa Aviation and Science Museum.

Just down the road and over the fence line from Misawa Air Base, the museum feels like a transplant from Washington, D.C., its sleek glass and steel-beam construction the snazziest for miles in this rice-farming community.

Inside, the tall, expansive rooms are chock-full of actual aircraft and dozens of interactive educational exhibits.

Much attention and space is given to a &#8220;Miss Veedol&#8221; replica, a fiery orange, single-engine Bellanca aircraft that made the first trans-Pacific flight from Misawa&#8217;s Sabishiro beach in 1931. It ended 41 hours later in Wenatchee, Wash.

As the museum&#8217;s Web site explains, the facility, which opened in 2003, aims to educate visitors on Aomori Prefecture&#8217;s place in aviation history, and to cultivate children&#8217;s interest in science and technology.

The biggest surprise and delight was the abundance of English &#8212; on display placards, in a museum pamphlet and spoken by some staffers.

After strapping into the Cessna simulator, I listened to my instructions: Pull the throttle for speed, maintain an altitude of 1,000 feet, and keep the plane level. My mission was to &#8220;hit&#8221; a series of hot air balloons appearing on large computer screens in the cockpit.

I think I was three-for-five. But I didn&#8217;t clench the steering wheel until lurching toward the tiny strip of digital runway.

I missed, skidding through the grass.

The ride was over. My heart was pounding. I felt queasy.

It was on to jumping while strapped in a chair to experience the moon&#8217;s gravity. Neil Armstrong must have felt like he had springs in his toes.

If that&#8217;s not enough thrills, visitors can also experience free-falling in a capsule seat floated skyward by an air pump or lift off in a tethered indoor hot-air balloon device.

And there&#8217;s lots to learn, from the elliptical path a satellite travels while in orbit to what causes lightning to strike.

Oh, and this: Don&#8217;t try to outrun an elephant, if the situation ever presents itself. Humans can run about 22 miles per hour, while an elephant is a bit speedier, at about 25 miles per hour, according to an interactive display that also clocks one&#8217;s speed.