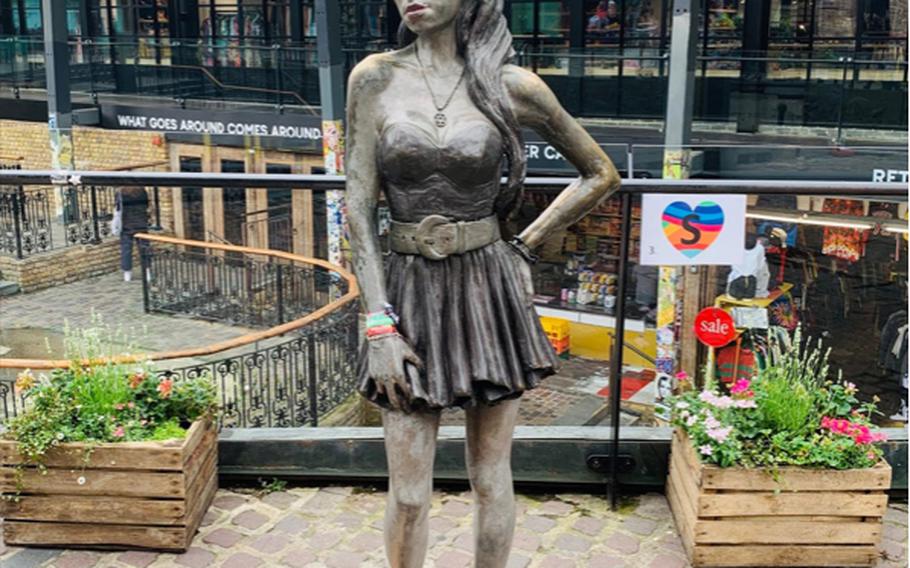 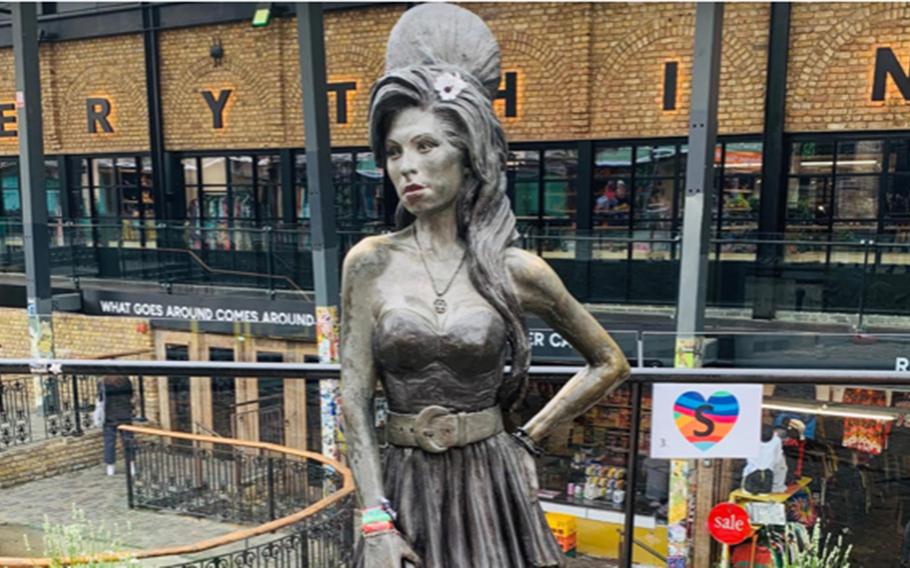 Countless small things are helping us to get through these pandemic-plagued days, amongst them great soundtracks reminding us of the carefree times of the past. Scattered throughout Europe, at times in the most unlikely of places, are found memorials to artists whose work particularly resonated with the public. Once travel returns to the playlist, strike out on a trip honoring your favorite musical legend.

Amy WinehouseThe district of Camden Town in London is known for its thriving market and fashion scene. Three years after the troubled artist’s untimely passing at the age of 27, a life-sized bronze statue of her was put up at the Stables Market. Amy’s beehive hairdo makes her instantly recognizable. Fans pay tribute to “The Queen of Camden” not only with flowers but by placing colorful bracelets on her wrists. Online: tinyurl.com/4byc7x2z

The BeatlesLiverpool’s waterfront has been one monument the richer since 2015, when a statue of the Fab Four was erected. The tribute stands at Pier Head, just outside the location of the Beatles Story exhibition. The statue’s date of inauguration reflects 50 years since The Beatles final public appearance in Liverpool, and the statues’ attire reflects a 1963 waterfront photo shoot that took place nearby. The larger than life-size figures of Paul, John, George and Ringo strolling down the street are cast in resin and clay. Online: tinyurl.com/s59ysfac

Bon ScottThe Scottish town of Kirriemuir, some 70 miles north of Edinburgh, was the boyhood home of Bon Scott, AC/DC’s lead vocalist from 1974-1980. Fans of the group raised the funds to erect the life-size bronze statue unveiled by former AC/DC bassist Mark Evans back in 2016. Scott now watches over the comings and goings of the town with a microphone in one hand and bagpipes in the other. Kirriemuir is also the site of the BonFest, an annual music festival attended by rock and AC/DC cover bands from around the world. Online: visitangus.com/bon-scott-statue

David BowieSince 2018, a bronze sculpture of David Bowie has overlooked the market square of Aylesbury in Buckinghamshire, the town in which Bowie first performed in the guise of his Ziggy Stardust persona. The statue, funded in part by a crowdfunding appeal and titled “Earthly Messenger,” features a panel of Bowie’s alter egos through time, and speakers play a Bowie song every hour. Online: tinyurl.com/yvytmjyx

Domenico ModugnoWhile the name of this singer might not immediately ring any bells, the title of his best-known song might resonate. The singer of “Volare” has been greeting visitors to southern Italy’s Polignano a Mare in the form of a bronze statue with outstretched arms since 2009. Online: tinyurl.com/4du9h66f

Elvis PresleyElvis Presley served as a soldier in the U.S. Army in Germany just a few miles north of Frankfurt from 1958-1960. At a traffic circle in Friedberg next to the former Ray Barracks at which Presley was stationed, a 3-D metal cutout of The King stands behind his guitar, and in town, three custom-designed traffic lights regulate pedestrian traffic. A red Elvis in front of his microphone tells people to stop, while the green Elvis swinging his hips sends them on their way. In nearby Bad Nauheim, where Presley lived with his entourage, a life-sized bronze of Presley will soon recline on a bridge between the Stadtbücherei and Rosengarten. The statue of Presley in his 3rd Armored Division uniform is based on a photo of him standing in that very spot. Online: tinyurl.com/erzjpv2t

Freddie MercuryMontreux, a city on the eastern shore of Lake Geneva in Switzerland, has played host to a world-famous jazz festival since 1967 and has always attracted more than its fair share of artists. In 1979, legendary rock band Queen purchased a recording studio in Montreux and went on to record six albums there. A bronze statue of frontman Freddie Mercury looks out to the lake, one fist raised and the other holding his microphone stand. Fans leave flowers, often yellow in memory of the singer’s favorite color, and other memorabilia. “Queen: The Studio Experience” is a permanent exhibition highlighting Mercury’s ties with the town. Online: tinyurl.com/3uahtkfk

John BonhamAbout 15 miles south of Birmingham, England, lies the town of Redditch, the birthplace of the late Led Zeppelin drummer. In 2018, on the date of what would have been Bonham’s 70th birthday, a statue of Bonham sitting behind his drum kit was installed in Mercian Square. The statue was paid for with donations from both sides of the Atlantic. Online: johnbonhammemorial.com

Ronnie James DioThis heavy metal singer-songwriter and composer associated with rock legends including Rainbow, Black Sabbath and Heaven & Hell was born in 1942 in Portsmouth, NH, the family’s place of residence while Dio’s father served in the U.S. Army during World War II. Although Dio passed away in 2010 at the age of 67 due to stomach cancer, he rocks on forever in Kavarna, Bulgaria in the form of a bronze statue. While a small resort town on the Black Sea seems an unlikely location for such a tribute, Dio performed in metal-loving Bulgaria on numerous occasions and actively campaigned for the liberation of Bulgarian nurses held prisoner in Libya. With the support of a mayor who was a rocker himself, Kavarna hosted an annual rock festival from 2006-2016. Online: tinyurl.com/54uc34c5

Rory GallagherThe legendary Irish blues and rock guitarist who died in 1995 at the age of 47 following complications from a liver transplant is immortalized in his birthplace of Ballyshannon, County Donegal, Ireland in the form of a life-sized bronze statue playing the guitar. Ballyshannon, which claims to be the oldest continually settled place in the country, honors its native son with a blues festival attracting musicians from around the world. Following two postponements, the Rory Gallagher International Tribute Festival is now slated to take place June 2-5, 2022. Online: tinyurl.com/uhtbn4ff

Frank ZappaA monument to one of the most innovative musicians of his era stands pops up in Lithuania’s capital city of Vilnius. Although Zappa had no immediate connection to the city and didn’t live to see it go up, the monument has an interesting backstory. Following his visit to the USA, an artist by the name of Saulius Paukštys told his friends that he had met and struck up a friendship with the great musician. While this was all a lie, Zappa caught the attention of other Lithuanian artists and became a symbol of freedom to residents of this former Soviet republic. The sculptor Konstantinas Bagdonas, better known for his busts of Lenin, created the statue as a signal of the new and more hopeful era back in 1995. Online: tinyurl.com/3p7s3kup