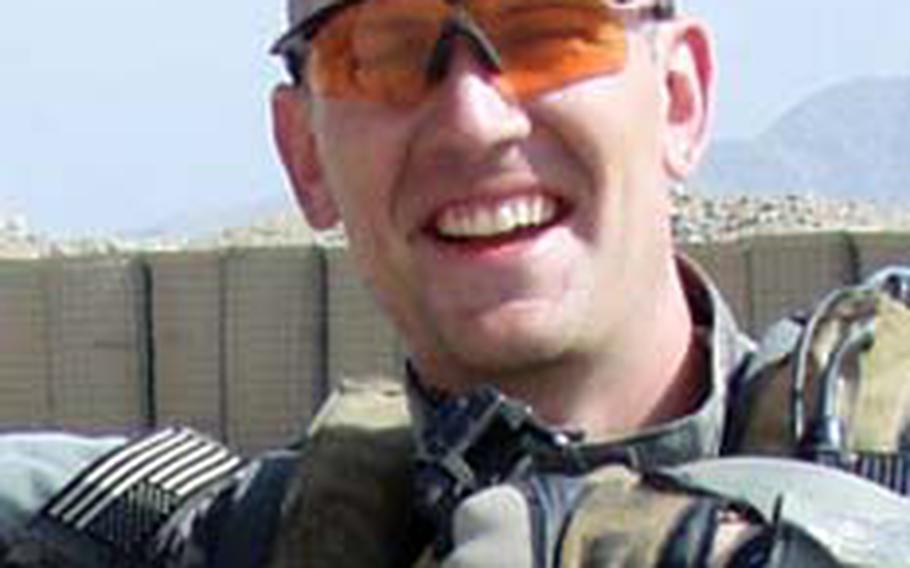 Fresh from escaping an ambush that left him with a bullet hole through his arm, Capt. Philip Buswell led his troops on a two-kilometer jaunt to link up with the rest of his team patrolling in another area.

When Buswell linked up with his other element &#8212; their power now consolidated &#8212; the team headed back to base, having completed the reconnaissance. "We&#8217;re all on edge because bullets have flown in recent memory," he said.

The team, a mix of Green Berets, Romanian special forces and Afghan army members, moved out deliberately. But when they approached a clearing, it was time to sprint.

The Afghans headed across first, running the roughly 40-yard open zone without a shot being fired in their direction.

Then Buswell moved his group forward.

"It isn&#8217;t my lucky day that day. We&#8217;re halfway across and machine guns and RPGs [rocket-propelled grenades] start hitting at us from about 200 meters away," he recalled. "But we make it across."

With fire still pouring down, the Romanian team members were not in a good position. Buswell ordered up suppressive fire, aimed in the direction of the plumes of smoke from the RPGs.

The incoming fire continued, but not as heavy as before. That&#8217;s when Buswell waved the Romanians across.

But counting as they ran, Buswell realized there was a problem. One, two, three &#8230;

Benny, apparently unaware his peers had decided to make their move across, was sitting back in a dangerous position alone.

But he did it.

Buswell grabbed a Romanian standing next to him and the two charged back for Benny, a Romanian special forces soldier.

After grabbing Benny, the three men turned to head back across the kill zone. Time for more trouble.

Once they made it across, the insurgents melted away.

For his courage, Buswell&#8217;s troops nominated him for the Bronze Star with "V" device.