A 1940 Japanese Zero fighter, the most advanced carrier plane in the world at the dawn of World War II, is on display at the Pacific Aviation Museum in Hawaii. (Wyatt Olson/Stars and Stripes)

A 1940 Japanese Zero fighter, the most advanced carrier plane in the world at the dawn of World War II, is on display at the Pacific Aviation Museum in Hawaii. (Wyatt Olson/Stars and Stripes) A B-25B, the version of medium-range bomber used in the famed Doolittle Raid over Tokyo in April 1942, is on display at the Pacific Aviation Museum in Hawaii. (Wyatt Olson/Stars and Stripes) 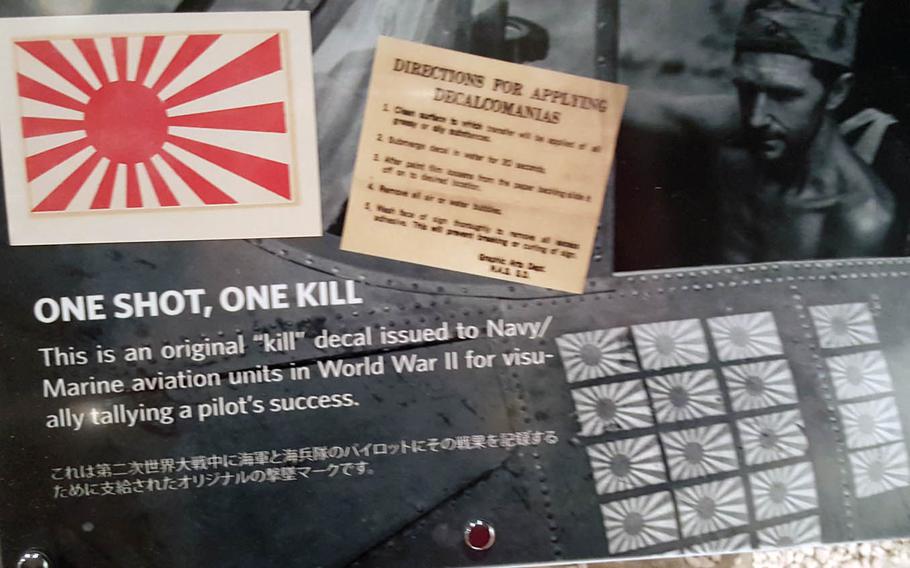 On display at the Pacific Aviation Museum in Hawaii is an original "kill" decal used by Navy and Marine Corps aviators to denote the number of enemy planes shot down. (Wyatt Olson/Stars and Stripes) 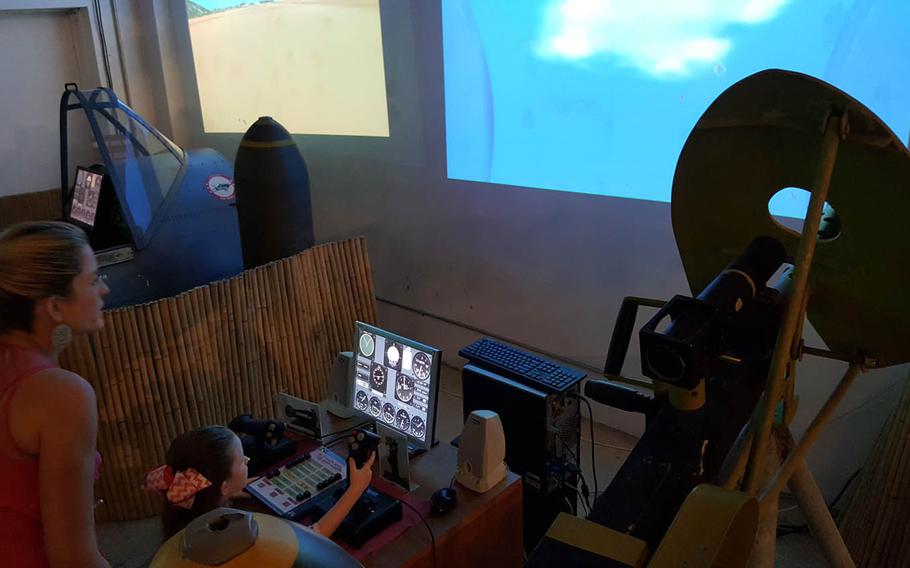 A visitor to the Pacific Aviation Museum in Hawaii tries her hand at one of the flight simulators that depict various battles and scenarios of World War II in the Pacific. (Wyatt Olson/Stars and Stripes) In 1942, this B-17E Flying Fortress crash landed in a swamp in New Guinea, where it rested in the muck for more than six decades. Dubbed the Swamp Ghost by Australian aviators, the plane was dissembled and helicoptered out of the remote area about 15 years ago, eventually finding a home at the Pacific Aviation Museum for restoration work about three years ago. (Wyatt Olson/Stars and Stripes) The P-40 Flying Tiger is perhaps the most recognizable fighter plane used by the United States in World War II. (Wyatt Olson/Stars and Stripes)

The Pacific Aviation Museum brochure suggests a tour of this expansive throng of aircraft will take an hour, maybe 90 minutes.

That’s a highly optimistic — unless, of course, you fly through it.

But then you’d miss all the little details that make this walk through aeronautic history so compelling.

The museum’s focus is primarily military aircraft used during and after World War II in the Pacific, and it would be hard to imagine a more apt location for the collection than on the 441-acre Ford Island in Pearl Harbor, Hawaii.

The largest ships of the U.S. Pacific Fleet were moored on Battleship Row off Ford Island when Japan mounted its surprise attack on Pearl Harbor on Dec. 7, 1941.

The Army had operated an airfield on Ford Island for several decades, but shortly before the attack it moved its aircraft to nearby Hickam Field. The Navy took over the Ford airfield, flying numerous patrol and scout planes from the hangars there.

Two of the hangars that survived the attack now house the museum collection.

The aircraft in the main Hangar 37 are displayed in dioramas that capture a bit of the WWII milieu.

A highlight is a fully restored 1940 Japanese Zero — or Mitsubishi A6M2, for flying buffs — which at the outset of the war was considered the best carrier-based fighter on Earth.

It was this plane that filled the morning skies over Honolulu 75 years ago during the surprise attack.

The Zero on display has been restored with paint and markings identical to those on one that crashed on the Hawaiian island of Niihau.

Actual relics from that downed Zero, which had been piloted by Japanese Naval Airman 1st Class Shigenori Nishikaichi, are also displayed in Hangar 37. Nishikaichi’s plane had been hit during the attack’s second wave on Bellows Field and Kaneohe Naval Air Station. He safely crash-landed on Niihau, about 140 miles west of Oahu.

Nishikaichi was overpowered and killed by two island residents. The plane was quickly torn apart by U.S. military investigators to learn the secrets of the Zero’s performance. A Niihau family gathered up the remaining parts, which were turned over to the museum in 2006.

The centerpiece of Hangar 37 is perhaps the B-25B, the version of medium-range bomber used in the Doolittle Raid over Tokyo in April 1942, a mission that lifted American morale, even if tactically it had little effect.

The B-25B had been deemed light enough to take off from a carrier but too heavy to land on one. Fifteen of the 16 bombers landed in China, with the final landing in the Soviet Union.

On one hand, the B-25B looks big standing in the hangar, but it must have seemed tiny to the crews who took off more than 700 miles away from Japan in an audacious plan that could have easily failed.

For a tiny glimpse of what it was like to do battle in the skies of the Pacific theater back then, there are flight simulators for interactive aerial dogfights and carrier landings. For $10, you can spend 30 minutes in the cockpit of a Grumman F4F-3 Wildcat, Japanese Zero, P-51 Mustang and others.

The museum’s other World War II standout, Swamp Ghost, is in the much larger Hangar 79, whose blue glass windows are peppered with bullets holes from the 1941 attack.

It’s a not-yet restored Boeing B-17E Flying Fortress, which was America’s primary bomber in the beginning the war in the Pacific. They operated from primitive airstrips carved out of jungle, with crews virtually cut off from supply lines and medical care.

The Flying Fortress at the museum first arrived in Honolulu little more than a week before the Pearl Harbor attack. In February 1942, it was assigned to the 22nd Bomb Squadron of the 7th Bombardment Group in northern Australia.

It was shot up by Zeroes during a bombing mission on Feb. 22, and the pilot crash-landed it into the Agaiambo Swamp in New Guinea. Australian Army pilots who subsequently saw the phantasmal wreckage below dubbed it the Swamp Ghost.

There it laid for more than six decades until an aviation enthusiast named Alfred Hagen had it disassembled and flown out by helicopter. It was returned to Hawaii three years ago.

There are more than two dozen more aircraft on display at the museum, from helicopters like the Bell UH-1 Iroquois and Sikorsky SH-3 Sea King to jet-era aircraft such as the F-4C Phantom II and Soviet-made MiG-15.

Just don’t be surprised that it takes more than an hour to see them all.

The Pacific Aviation Museum DIRECTIONS The museum is on Ford Island, an active military base, so you must have a U.S. military ID to drive directly to the museum. Most visitors use the shuttle buses that leave frequently from the nearby Pearl Harbor Visitor Center. Allow about 30 minutes for the shuttle bus ride each way. No bags are allowed on the shuttle bus; belongings can be stored near the bus stop for $3 per bag.

Driving from downtown Honolulu, take the H-1 freeway west and take the exit 15A, marked Arizona Memorial Stadium. Continue on Highway 99/Kamehameha Highway for about a mile, turning left at the fourth traffic light onto Arizona Memorial Place, where you’ll immediately see the Pearl Harbor Visitor Center. Free parking is in large lots surrounding the center.

INFORMATION Photographs are allowed in the museum. Phone: (808) 441-1000; web: www.pacificaviationmuseum.org.