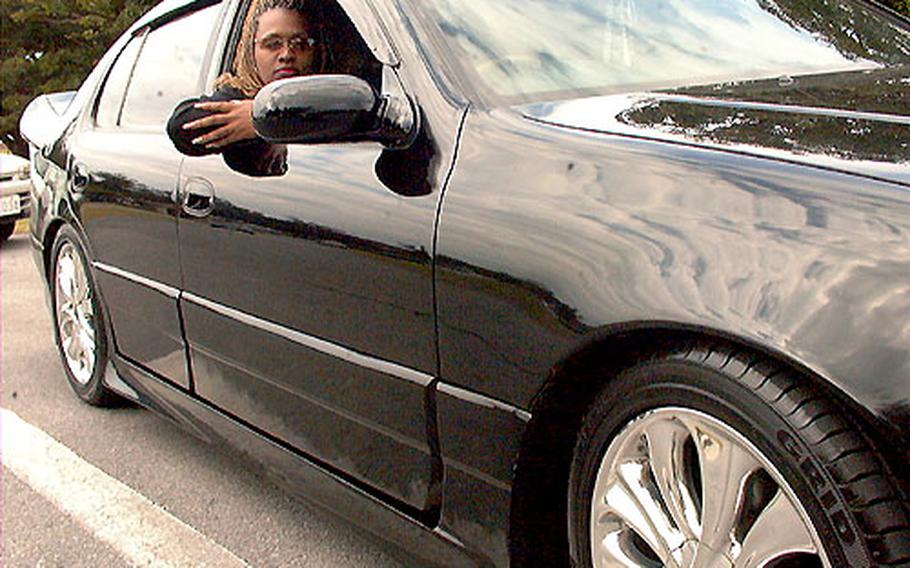 A love of cars drives Peaches Jordan at Kadena Air Base, Okinawa, to spend thousands of dollars on modifications to keep her 1991 Toyota Aristo looking sharp (Carlos Bongioanni / S&S)

A love of cars drives Peaches Jordan at Kadena Air Base, Okinawa, to spend thousands of dollars on modifications to keep her 1991 Toyota Aristo looking sharp (Carlos Bongioanni / S&S) 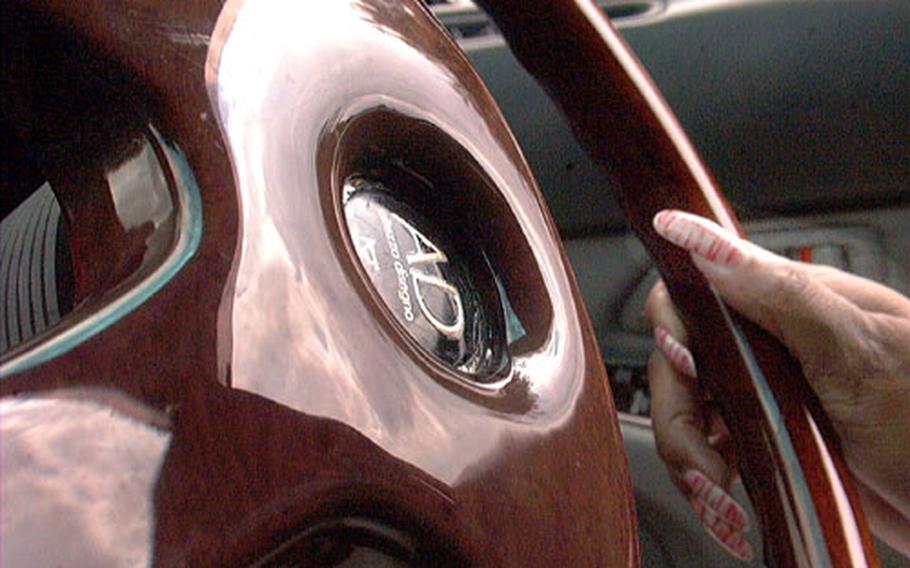 A $200 gleaming mahogany steering wheel is the first of many interior modifications Peaches Jordan has planned for her 1991 Toyota Aristo. (Carlos Bongioanni / S&S)

With its V-8 engine purring in idle, the sleek black vehicle sat low to the ground like a panther.

The gate guard turned and watched until the sporty coupe faded into the distance with its four chrome tailpipes imitating the sound of a turbosupercharger.

Peaches Jordan, the Aristo&#8217;s owner, has a fetish for stylish cars that compels her to spend thousands of dollars to make modifications that turn heads. But it&#8217;s not an ego thing, she said.

Since acquiring the Aristo in January, Jordan lowered it two inches by cutting the shock absorber springs. She attached a wing-shaped fiberglass spoiler to the trunk, added a CD/cassette stereo system and put in a solid mahogany steering wheel. She changed her headlights to blue and put a chain-designed chrome frame around her license plate. She also installed two additional chrome tail pipes to give her vehicle a turbo-charged sound.

Jordan said she doesn&#8217;t make the modifications to show off or to compete with others. When she sees somebody else with a nice car, she&#8217;ll roll down her window and give them a good word. &#8220;I have an appreciation for what others do to their cars. I don&#8217;t hate on somebody because they might have something I don&#8217;t have.&#8221;

Jordan said she lucked out and bought the Aristo for only $4,000 from a person who was transferring off the island and had to sell before the car&#8217;s Japanese compulsory insurance ran out. The car already had some major modifications done to it, including a $3,500 custom-made aerodynamic side-skirts kit.