PAX convention assures like-minded gamers that they're not alone Buy Photo
Few PAX attendees were ashamed of their dancing skills, and many volunteered to try out "Just Dance 3" at the Ubisoft booth Aug. 30. (Sam Laney/Stars and Stripes) 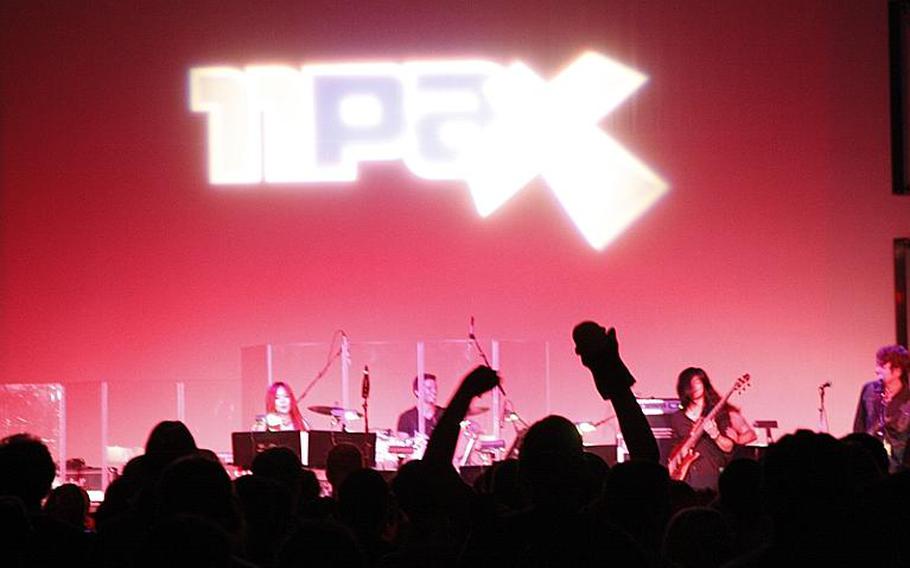 Buy Photo
Gamers rock out Aug. 30 during one of the late-night concerts at PAX Prime in Seattle. (Sam Laney/Stars and Stripes) Buy Photo
Bean bag lounges were a great place to crash and play some video games after 10 hours of running around playing video games at PAX. (Sam Laney/Stars and Stripes) 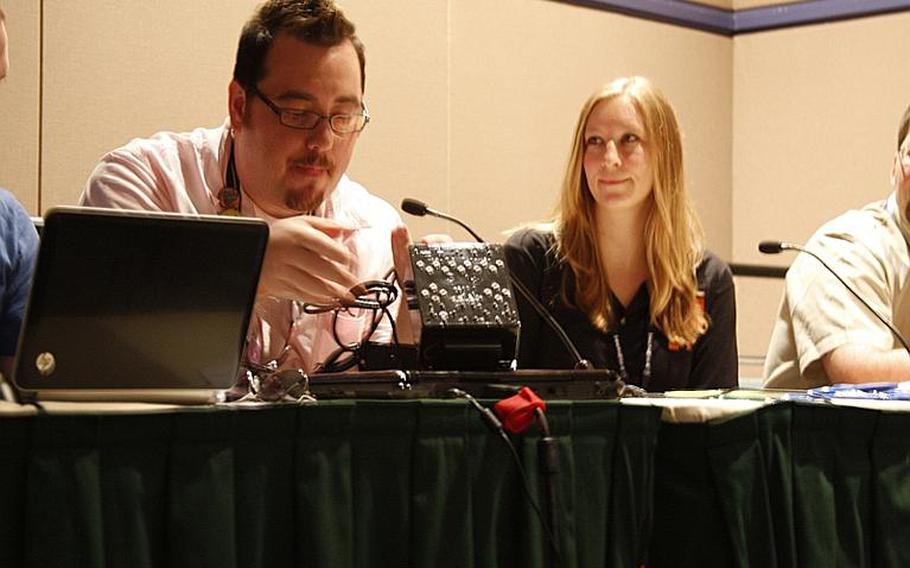 Buy Photo
Mark C. Barlet, left, of the AbleGamers Foundation, unveils what he dubbed a landmark controller for the disabled during panel talk Aug. 30 titled "Gamers Doing Good." On the right is Stefanie Shea, director of Fun For Our Troops, a nonprofit that sends games to troops overseas. (Sam Laney/Stars and Stripes) Buy Photo
Mark C. Barlet, left, of the AbleGamers Foundation, unveils what he dubbed a landmark controller for the disabled during a panel talk Aug. 30 titled "Gamers Doing Good." On the right is Stefanie Shea, director of Fun For Our Troops, a nonprofit that sends games to troops overseas. Barlet said the controller would cost around $500, considerably less than similar controllers for the disabled. (Sam Laney/Stars and Stripes) 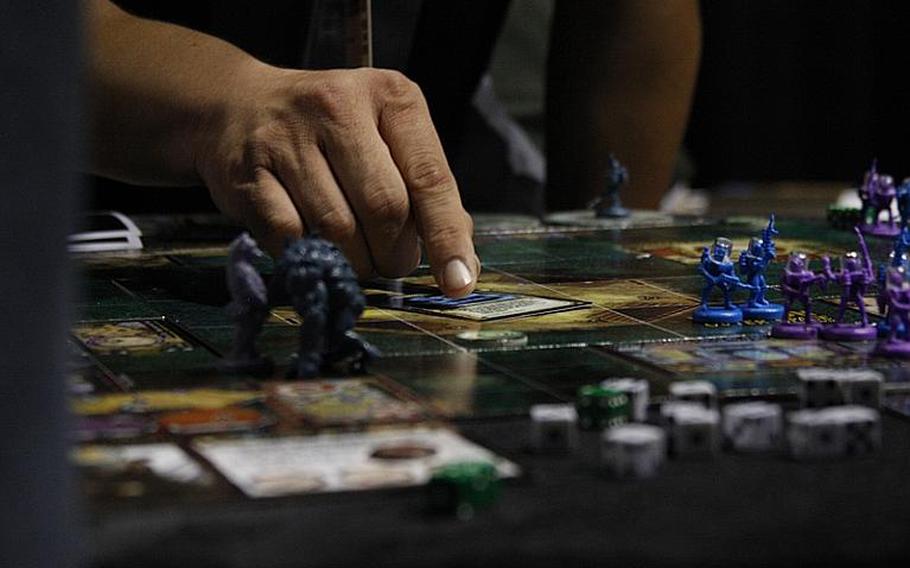 Buy Photo
A PAX exhibitor explains a card and figurine game he was showing at the exhibition hall Aug. 30. (Sam Laney/Stars and Stripes) 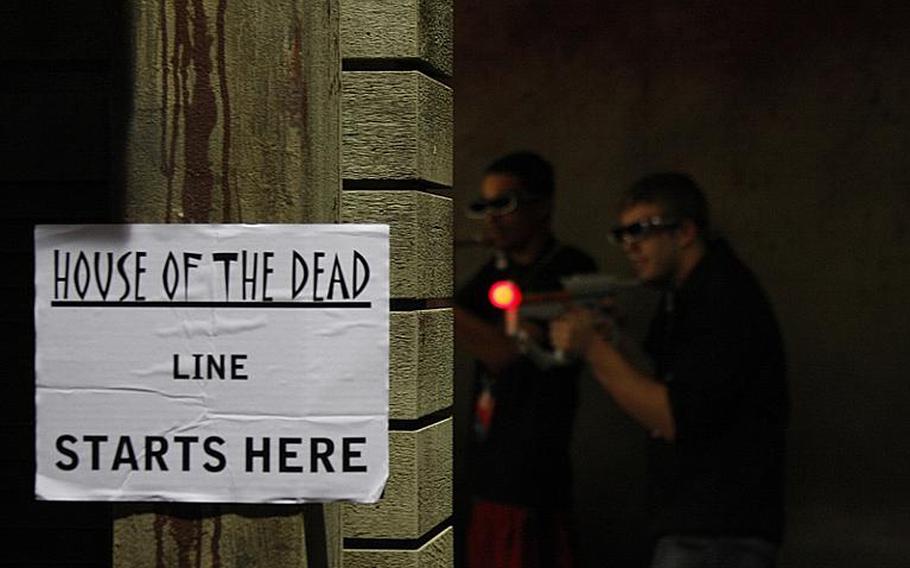 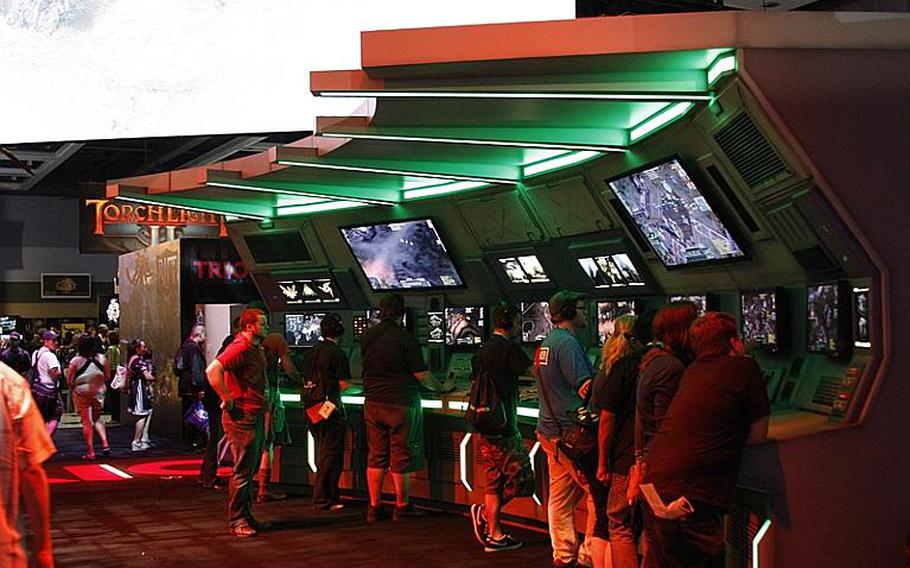 Buy Photo
The exhibition hall was decked out with E3-style game booths, some more creatively lit than others. (Sam Laney/Stars and Stripes)

I&rsquo;d plopped myself down on a pink bean bag chair on the third floor of the Washington State Convention Center in Seattle, writing about the biggest games I&rsquo;d played that afternoon. A steady stream of attendees occupied the bags littered across the floor, some sitting to play board games or talk, most leaving after a few minutes.

Slowly, as though it had been on low heat, loud bursts of laughter started bubbling up over the volume of my headphones. Then one man&rsquo;s stern voice.

The Penny Arcade Expo, held last weekend in Seattle, has always been a swirling mix of body odor, gaming and 20-sided dice. From Friday morning through Sunday evening, gamers converge &mdash; maybe even lay siege &mdash; to the city&rsquo;s center. This year was the same as every other year &mdash; it was huge, epic and geeky. More than 60,000 strong, PAX attendees dominated the downtown Seattle area with sheer numbers. Now in its 11th year, the convention has spilled over into a nearby hotel, annex and concert hall.

But what is PAX, exactly? There are concerts, sure. Big games and game publishers take up a huge portion of the real estate as well. Academics and gaming celebrities host lecture panels throughout the day and night; littered between are the board game tournaments, bean bag lounges, jam rooms, costume contests, private parties, booth babes and impromptu games of late-night &ldquo;werewolf.&rdquo; Open the 80-page event schedule and it&rsquo;s quickly apparent &mdash; PAX is many things all at once to many thousands of people.

To Mark C. Barlet, president of the nonprofit AbleGamers Foundation, it was a chance to gather a crowd of about 50 like-minded people and talk about the importance of promoting accessibility in gaming.

For him, PAX could be about &ldquo;how what we do as gamers every day help people&rsquo;s lives. I&rsquo;m really concerned with the accessibility of the game; playability of the game.&rdquo; Barlet was on hand to unveil a new game developed in partnership with Evil Controllers called the &ldquo;Adroit Switchblade.&rdquo;

The controller is essentially a large black box with many programmable switches, allowing someone to perform many functions at once with the press of a single button. His fellow panelists included Stefanie Shea, director of Fun For Our Troops, who talked with passion about making games accessible to servicemembers.

&ldquo;It&rsquo;s a good feeling to receive something from home and something they&rsquo;re so interested in [that reminds them of] back home. A lot of them get tons and tons of packages of toiletries and soap &mdash; and, yeah, they need those things, but I think they&rsquo;d really rather play some games.&rdquo;

Being at PAX, surrounded by thousands of like-minded folks, is a welcome change of pace. Shea says she often faces skepticism when she talks about the mission of her nonprofit.

&ldquo;People ask me, &lsquo;What do you do?&rsquo; I say, well, I send video games to troops in combat zones. I get these looks like, &lsquo;Why the hell would you do that?&rsquo;

&ldquo;I think that if you don&rsquo;t get it, you&rsquo;re not going to get it. You clearly don&rsquo;t use games the way these people do and don&rsquo;t have this connection. So I know that &hellip; they think it&rsquo;s just kind of something that&rsquo;s something silly and frivolous. But I don&rsquo;t care because I know it&rsquo;s not.&rdquo;

Military looking for good gamersBrushing off skepticism about games, and gamer culture, is a little easier to do when you&rsquo;re surrounded by thousands of people immersed in gaming culture.

Two floors below Shea and Barlet&rsquo;s panel, Chief Master Sgt. Scott H. Terpening, a senior Air Force Reserve recruiter based out of Joint-based Fort Lewis-McChord, was looking for the very things that might make any non-gamer skeptical of the stereotypical gaming lifestyle. Willingness to dress up in elaborate costumes? People with not necessarily the best physiques, but probably a better reaction time?

Terpening says those folks just have &ldquo;a dedication and creative imagination.&rdquo; And gamers, with their exposure to high-tech concepts and familiarity with things like virtual flying, are exactly the type of people he&rsquo;s seeking.

&ldquo;I think the talent that comes to these tech, niche places is absolutely the talent that the Air Force Reserve is looking for,&rdquo; Terpening said. &ldquo;Obviously, we&rsquo;ve got dancing zombies. We&rsquo;ve got Mario, Sonic the Hedgehogs running around here. That&rsquo;s awesome.&rdquo;

Terpening had brought out a UFC star to help spark conversation with any passerby.

&ldquo;[I&rsquo;ve met] a lot of interesting folks. &hellip; If you said, &lsquo;Chief, here&rsquo;s a school, you only have an hour; who do you go talk to?&rsquo; I&rsquo;ll look for the folks who are club-minded, activity-minded, sports-minded, which also turns into gaming-minded. Obviously, you&rsquo;re gonna have some that want to be shut-ins, that sit on the couch and drink Coke and eat donuts and play games all day long. It&rsquo;s a matter of shifting through and finding those shiny pennies.&rdquo;

Military service was a long way from Army Spc. Frank Yturralde&rsquo;s mind. Born in the year of the launch of the NES in 1985 (&ldquo;so I&rsquo;ve been a gamer since &rsquo;87&rdquo;), he was at PAX as a hard-core gamer only.

&ldquo;I came more than anything for the concerts. VGO (Video Game Orchestra), that&rsquo;s the highlight of the first day. I&rsquo;m usually here for [MC] Frontalot. The live D&D (Dungeons and Dragons) that they do, that&rsquo;s one of the highlights of the show. I&rsquo;m really looking forward to that.&rdquo;

Yturradle thinks gaming definitely has a place in the military &mdash; especially downrange.

&ldquo;There&rsquo;s a lot of random lulls [downrange]. When you&rsquo;re in the middle of the woods somewhere, it&rsquo;s either stare at trees or play games.&rdquo;

The origins of PAXHard-core or casual. Man or woman. Child of the Internet or child of the NES &mdash; gaming is taking hold of an ever-larger critical mass. PAX began as a small a tribute to gaming culture. At the center, the Penny Arcade creators: Mike &ldquo;Gabe&rdquo; Krahulik and Jerry &ldquo;Tycho&rdquo; Holkins, spin new events &mdash; both charitable and for the gamer community &mdash; from their massive online audience. It just so happens for a weekend that one of them is the size of a small city.

It&rsquo;s that ability of games to fill lulls and to provide shared experiences that excited Barlet to form his AbleGamers Foundation. We can&rsquo;t all be masters of &ldquo;Words with Friends,&rdquo; and we can&rsquo;t all be at the top of the &ldquo;Starcraft 2&rdquo; ladder. But we can celebrate these things together. Being one of thousands to dress up, play a board game in a crowded hallway, to take over downtown Seattle &mdash; it&rsquo;s multiplayer to the extreme, and the more that participate, the more are vindicated.

During the panel, Barlet told the story of a disabled gamer he knew who was playing the online game &ldquo;Second Life.&rdquo;

&ldquo;[He] has muscular dystrophy, and he can&rsquo;t really move too much. We were on this island that was designed to help people who were disabled get around in Second Life. There was a little jungle gym. He got on it, and because he was swinging and looking through the first-person eyes, he was swinging and all I heard was &lsquo;Oh God, this is making me sick!&rsquo;

&ldquo;I thought &mdash; I know that sounds kinda funny &mdash; but how amazing is that, for someone who has never been able to do that in real life &hellip; he was getting the exact same experience that that thing gave all of us when we were nine.

As I sat there on the convention floor Saturday night, eventually unable to write or think above the din and the absurdity of what was going on around the corner, I had to get up and take a look. There were about 20 young men and women, of various ages and ethnicities, grouped in a circle on pink and yellow beanbags, laughing. The moderator stood in the center, and now everyone was to debate who among them killed a fellow townsman during the night, and must therefore be a werewolf.

After five minutes of boisterous finger pointing and politics, the moderator announced the group had hanged the wrong man, and that it was time to close their eyes because it was now dark again.

Time for the game to devour someone else.