Going with the flow on an impulsive trip to Thailand 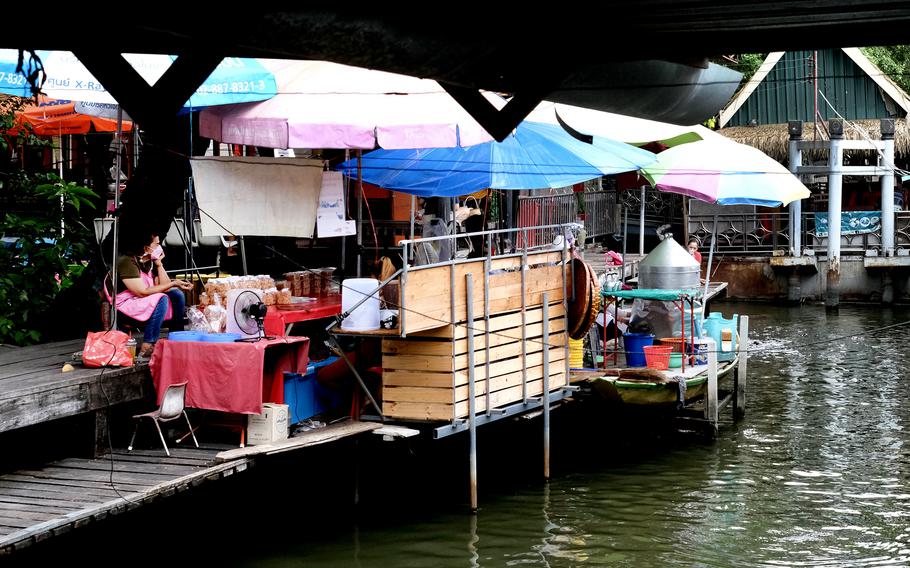 A floating market on one of Bangkok’s canals. ( Lily Radziemski/For The Washington Post)

On the southwestern coast of Thailand, limestone cliffs tower over seawater against the backdrop of swaying trees. Long-tail boats -- the only means of transportation to Railay Beach -- sit parked in the distance, neon-pink-and-green flags swaying at the bow. Sand bubbler crabs dip above and below the surface, leaving their intricate designs at the mercy of high tide and flip-flops. I'm sitting in a bar on the beach, watching water droplets fall down my ice-cold Singha beer, looking at the sunset glimmer on the water. Picturesque doesn't even begin to describe this. There's just one question on my mind: How did I end up here?

A few weeks earlier, I was fantasizing about going somewhere -- anywhere -- far away. I craved the feeling of being lost in an unfamiliar city, soaking in its sounds, smells, energy. This led to casually browsing plane tickets to Southeast Asia, when a reasonably priced ticket to Bangkok popped up. Later that month, I boarded the plane with a friend who booked her trip a few days after mine.

While jetting across the world on a whim admittedly made me feel pretty cocky, it turns out I'm part of a larger trend.

According to data from the online travel company Skyscanner, demand focused on the Asia-Pacific region -- and Thailand in particular -- has taken off since coronavirus restrictions began to ease in April. During May and June, for example, it was the third most popular long-haul destination from France, where I live. Beyond the uptick in trips to the region, Matt Bradford, who analyzes trends and insights for Skyscanner, has identified short booking horizons -- a window of 30 days or less between booking and takeoff -- as a new behavior. He explained by phone that, in France during May and June, 39 percent of bookings made on the site were for departures within one month. (In the United States, that figure was 35 percent.)

When the doors slide open at Bangkok's Suvarnabhumi Airport, it hits you: wet, sweltering heat. Within one minute, my skin was covered in a slick film of humidity and sweat, dripping down the back of my neck as we hopped into a cab. We drove past roadside dumpling joints, skyscrapers and a seemingly endless string of stalls selling sex toy souvenirs. The next afternoon, after a delicious lunch at Rung Reung Pork Noodle -- a bare-bones, plastic-stool, fan-blasting haven for pork meatballs, noodles and broth -- we set off toward Wat Arun, a temple built during the Ayutthaya era on the bank of the Chao Phraya River. Its "prang" towers more than 200 feet overhead, intricately decorated with porcelain pieces and walkways that snake up and around it. As we were strolling through the grounds, a lady approached us offering a boat ride around a nearby floating market.

Our boat driver soon led us through Thonburi's network of klongs, or canals, lined with worn wooden houses, many tilting on the stilts holding them above water. A woman wearing a straw hat with bows clipped onto the band slowly approached us on her long-tail boat, offering bracelets, key chains and flowery hair clips. After we politely declined, she reached into her cooler, emerging with a grin. "Beer?" While this normally wouldn't send me over the edge with excitement, Bangkok had banned alcohol sales for 24 hours during its election, and a cold Chang sounded pretty good in that heat. I bought one for myself and our driver, and we continued to drift through the canals. 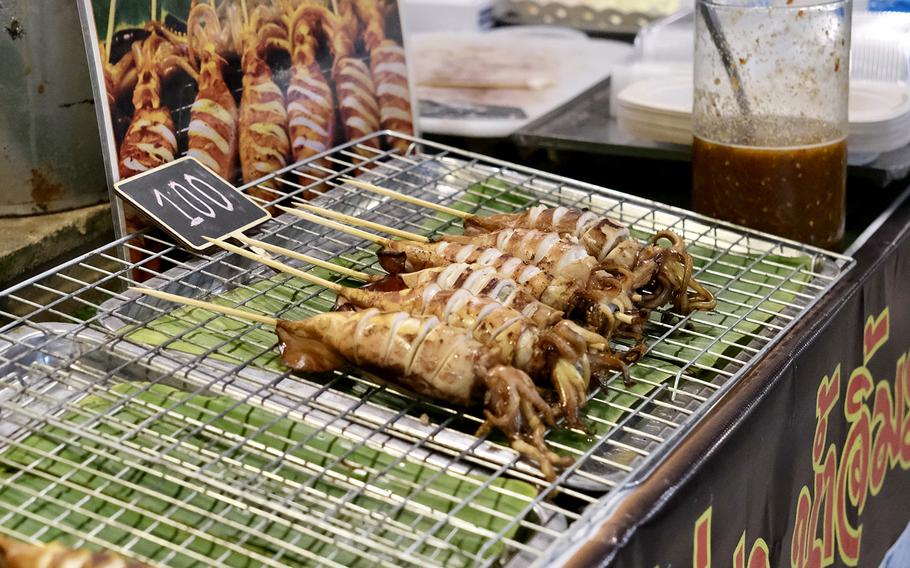 I'm no floating-market expert, but let's just say this one was slightly underwhelming; after a quick snack of fried quail eggs with soy sauce and sugar, we set off back toward Bangkok and spent the evening on a rooftop paying for drinks with crypto, the bar's only payment option.

The next two days would see endless heaps of sausages splattering into hot oil on street food carts, 3 a.m. massages on Khaosan Road and walks down the side streets of Sukhumvit. Then, after being seduced by travelers and locals raving about the south - they generally urged us to avoid Phuket, the notorious destination for tourists looking to get lost in the black hole of its nightlife - we hopped on a plane.

After the intense, electric urban energy of Bangkok, Krabi -- a southern province on Thailand's Andaman Sea -- was a literal breath of fresh air. We hopped into a shuttle that made various drop-offs in towns throughout the area. The driver played American country music as we drove past lush greenery on winding roads, passing a shooting range on the way into Ao Nang. A tourist, probably in her 20s, was talking to the woman next to her. "We don't really have a plan," she said.

They weren't the only ones.

In Krabi, we set off by long-tail boat to explore the Ko Poda, Ko Thap and Ko Khai (or "Chicken") islands off the coast, within the Phi Phi Islands national park. To say our first stop looked like a postcard would be a vast understatement. If you've ever imagined yourself on a deserted island, gazing out into crystal-clear waters under the shade of a mangrove tree on a white-sand beach, this was that.

There was no one else in sight as we dived into the calm water, splashing around gleefully with silly grins on our faces. I soon started to notice some stinging on my upper arm. Thinking I was being a hypochondriac, I ignored it. A couple of minutes later, back onshore, my friend mentioned that her arm was stinging but reasoned that it was probably because of the saltwater-and-sunburn combination.

When we finally connected the dots about our ailments, we strolled back to inspect the water. As it turns out, the deserted white-sand beach wasn't deserted at all, but was instead full of massive translucent jellyfish, in the water and washed ashore, a small detail we didn't register on our walk from the boat. Our driver didn't seem too concerned, though. When asked whether the stings were dangerous, he laughed, shook his head and said, "No dead, no dead," still chuckling as he returned to the stern. 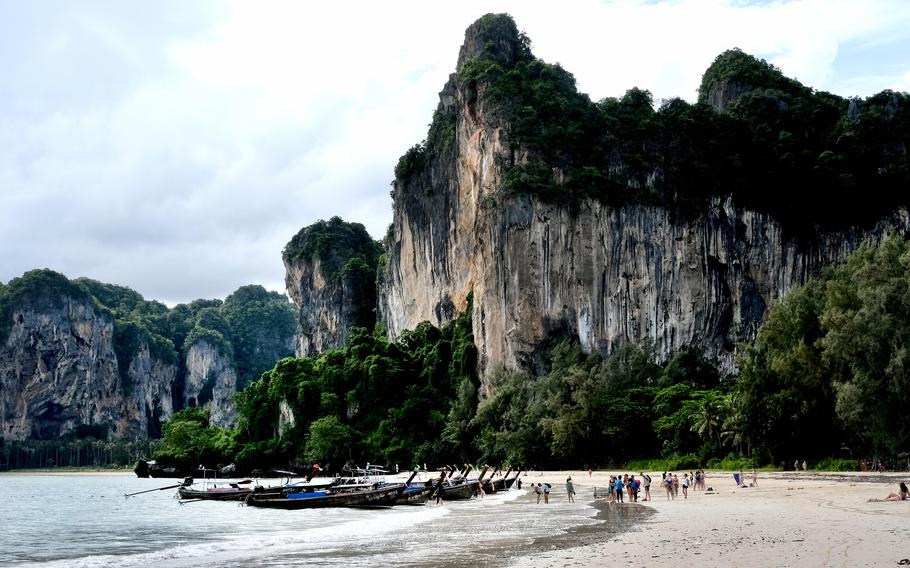 On our last night, we returned to Railay Beach via long-tail boat, tilting dramatically against the waves, water splashing into the boat through the open sides. After wading through the water to get to shore, we dropped off our stuff and hit the beach bar. "Hotel California" played in the background as the sun disappeared over the horizon, revealing stars and the vast surrounding cliffs shining in the moonlight.

Then, the power went out.

After a few minutes, the bartender created a makeshift glowing lantern by putting his phone flashlight under a bottle of Curaçao. Candles were lit. We asked for another round. "Why not?" he replied.

A wander through the pitch-black town revealed shadows of massage ladies, chatting quietly while huddled together, looking out onto the pathway. Bartenders hung out outside, just their silhouettes visible in the darkness. In one bar, candles cast a glowing light over a pool table beyond the open windowsills, an acoustic guitar player singing behind it. We spent a few hours in that bar as rains flooded the road outside.

Behind us, the bartender kept laughing to himself, repeating, "Why not?" - seemingly the town's unofficial catchphrase - every couple of minutes. We couldn't make out the faces of the people opposite us, just their shadows. Reality felt conflated with a sort of dream world - in a good way.

Suddenly, the lights came on. Almost immediately, the place that couldn't have felt farther away from home made me think of the bars on Rue de Lappe, the notoriously rowdy party street in my Paris neighborhood, characterized by neon lights and flaming shots. Acoustic music quickly faded behind the Top 40 songs blasting on the stereo, and fairy lights blinked aggressively on the walls. It was time to go. The next morning, I left Krabi, already feeling nostalgic as that night shifted from reality into memory on the journey back to Paris.

I'm not advocating for always traveling without a plan. We missed a lot. The one thing we really wanted to do -- travel by train from north to south -- wasn't possible without booking ahead. Our floating-market experience could have benefited from better research. We could have seen more sights. But if someone had asked me, "Would you like to take a rickety long-tail boat in high swells to this isolated beach town that will lose power, where you'll be essentially stranded until morning?"