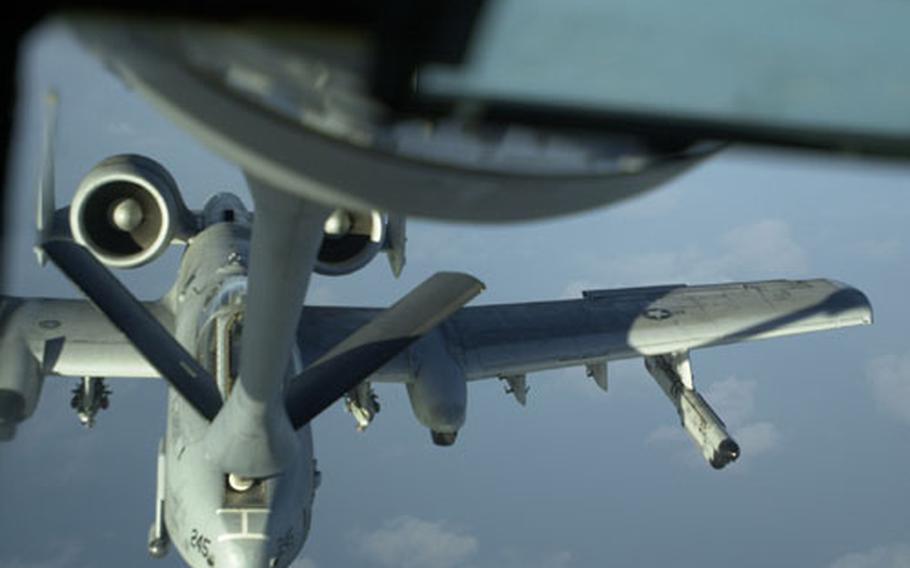 An A-10 Thunderbolt takes on fuel from a KC-135 Stratotanker while flying over the ocean off the west coast of South Korea Thursday. (Fred Zimmerman / S&S)

It&#8217;s a saying heard every day at service stations around the world.

It&#8217;s also something some Air Force servicemembers hear, but there&#8217;s nothing typical about their gas pumps. They run their stations at more than 20,000 feet while soaring through the air at several hundred miles per hour.

In the Pacific, that responsibility falls to the 909th Air Refueling Squadron, the only active-duty KC-135 refueler squadron in the region.

&#8220;We cover 54 million square miles,&#8221; said Lt. Col. Doug Gould, the squadron&#8217;s operations officer, just before embarking on a mission in mid-December. The squadron flies missions ranging from Alaska to Mauritius, a small island off the Eastern coast of Africa.

The planes also double as cargo and troop carriers and are able to carry up to 36,000 pounds of cargo.

For the pilots of the 909th, timing is one of their top concerns, said 1st Lt. William Jones, a co-pilot.

Jones said it&#8217;s also important for the pilots to maintain a certain speed for each individual aircraft. On Thursday, the Stratotanker flew at about 410 mph to refuel the F-16s and 300 mph for the A-10s.

Once they reach their destination, it&#8217;s up to the boom operator to ensure that all refuelings run smoothly. Jones said the boom operator is in charge of the plane&#8217;s overall safety since he is the one with eyes on the receiver at all times.

After he crawls into the small boom operator&#8217;s space in the rear of the aircraft and lies belly-down in his tight workspace, he runs tests before receiving the first plane to be refueled.

Once the checks are done, DellaLucca waits for the receiving plane to approach and makes contact with the pilot. He then directs the aircraft toward the boom by using a series of lights, which tell the pilot to either go up, down, forward or back. Once the plane is in position, DellaLucca extends the boom, makes contact and inserts the nozzle. The next step during the actual refueling is keeping the receiver stable.

DellaLucca said that one of the biggest challenges is refueling inexperienced pilots. Sometimes it can take a new pilot up to six tries to accomplish a hookup.

The pilots of the 909th fly an average of one or two missions each week. Because the unit is short-handed, the boom operators fly three or four missions a week.