This building at the Jeondeungsa Temple on Ganghwa Island in South Korea was built in 1621. The monks use it during the mornings and evenings for praying and chanting services. Guests are invited to perform 108 bows, a reminder of the 108 defilements of sentient beings. (Teri Weaver / S&S)

This building at the Jeondeungsa Temple on Ganghwa Island in South Korea was built in 1621. The monks use it during the mornings and evenings for praying and chanting services. Guests are invited to perform 108 bows, a reminder of the 108 defilements of sentient beings. (Teri Weaver / S&S) 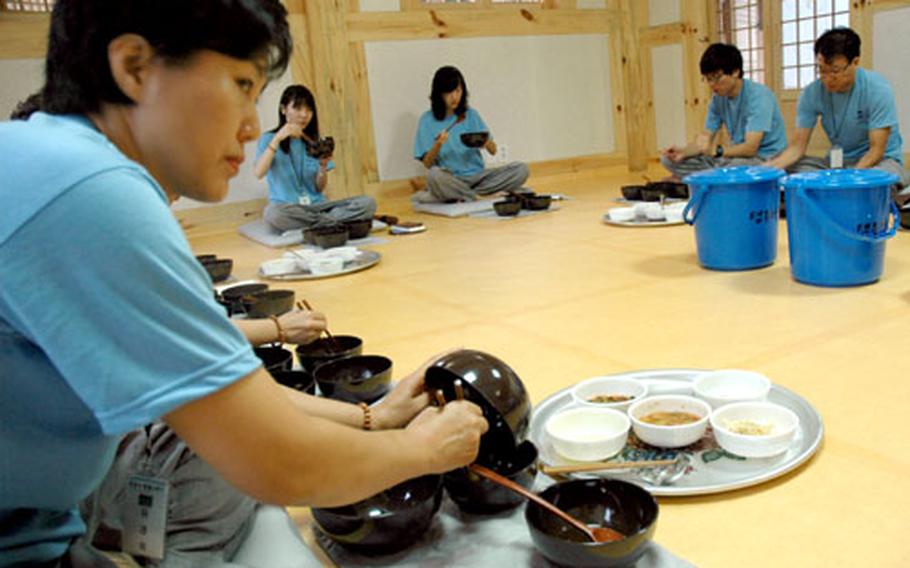 While a simple meal, the monk’s balwoo gongyang requires specific precedures for rinsing each bowl before and after eating. The blue bins collect the last of the bowls’ water; this slurry is inspected by the monks to see whether everyone has properly cleaned his or her bowls. (Teri Weaver / S&S) Our first stop was at a small temple in Incheon, where a monk served us 30-year-old Chinese tea. He carved the wooden table himself. His room was filled with books on Buddhism, a television, fax machine and computer. (Teri Weaver / S&S) 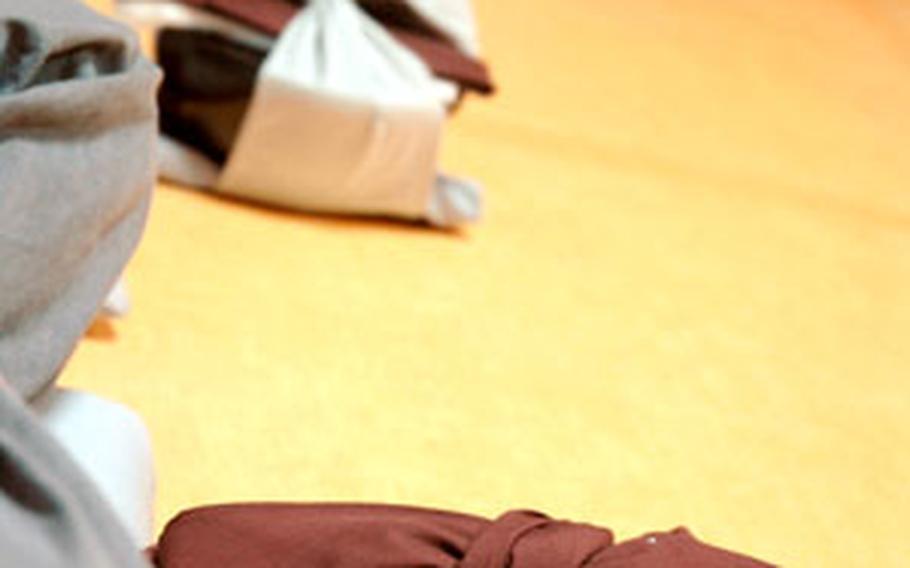 At about 6:30 a.m., we began preparations for breakfast. We dined balwoo gongyang style. The traditional monk meal requires silence and solemnity, with bowls, rice and soup dispensed with great care. The meal begins and ends with the dishes and napkins tied with a special bow. (Teri Weaver / S&S) A monk walks through the grounds at Jeondeungsa Temple. The temple grounds were established in the 13th century. It was the place where a canon of 81,340 woodblocks were carved, one of the most important texts in Buddhism. That collection now resides at Haeinsa Temple, near Taegu. (Teri Weaver / S&S)

GANGHWA ISLAND, South Korea &#8212; In the beginning we were on the subway, headed from Seoul to Incheon on a Saturday afternoon in August.

On the way, the guide for our weekend Buddhist temple stay generously offered to share his mosquito repellent. I watched dumbly as he put away the aerosol can and, with remarkable timing, began a dissertation on the cause-and-effect tenant of Buddhism.

The world and all its beings are interconnected. Every footprint leaves its mark.

I had wanted to stay at a temple to learn about Buddhism, to escape the city&#8217;s late summer heat and to spend a relaxing night in the woods. I had convinced two American friends to come for an overnight trip to Jeondeungsa, a temple built in the late 13th century on Ganghwa Island, west of Incheon. Our guide, a South Korean man who had led similar tours for Americans, offered to escort and translate for 60,000 won, about $65 each.

Things turned out to be less peaceful than I&#8217;d envisioned. Cell phones rang. Translation lagged. The floor in our sleeping rooms burned all night long.

Our first look at Jeondeungsa had proved promising. It lay toward the southwest end of Ganghwa Island on a foothill called Jeongjoksan, a collection of wooden buildings with familiar bowed roofs, curving like smiles. On the horizon, the tips of small mountains rose lush in a green haze. Along the walkways, hydrangea blooms puffed out like overgrown baby booties, pink and blue. It smelled like wood and earth and rain.

Upon arriving, we Americans, along with 13 Korean men and women, received a T-shirt, loose-fitting pants and instructions on how to behave ourselves at the temple. Walk slowly with folded arms. Bow to oncoming monks. Speak as little as possible.

Not 10 minutes later, a loudspeaker barked throughout the park, probably reminding everyone to be quiet, my friend quipped. Daytime visitors at the park shouted to their scampering kids. A construction crew screeched and sawed.

A monk walked by, talking on his cell phone. I neglected to bow.

I tried to regain some composure by asking questions.

I gave it a second go, this time after dinner and as our guide&#8217;s translation began to taper off. We had gone to a chanting ritual, and I enjoyed hearing the monks intone words that ran together with almost no pause for breath.

Then the monks canceled the night&#8217;s 108 bows because of the summer weather. Buddhists do a series of full-body bows to recount the 108 &#8220;defilements in sentient beings,&#8221; according to our English-language booklet that became my main source of all things Buddha.

I had looked forward to this physical meditation. But it was August, the night air stuffy and hot. I could hardly complain.

Hardly, that is, &#8217;til we went to bed and I discovered the monks had turned on the heat under our beds. When I say heat, I mean an honest-to-Buddha fire that burned under the building and radiated through the floor all night.

Needless to say, I was not enlightened.

We spread our sleeping pads and flopped around all night like bacon curling in a frying pan. When the call for prayers came at 4 a.m., none of us had slept for more than an hour.

Then I missed morning prayers, called yebool, because I was last in line for the bathroom.

I was done asking questions.

&#8220;It was awful,&#8221; I said to our guide in my non-temple-stay voice about our overnight accommodations.

I went off to bow as the sun rose. I fell to my knees, put my forehead on the ground, placed both arms before me, rotated palms upward. Then I reversed the steps, pushing off with hands and toes and rising with hands pressed together at my chin.

I did them all and emerged sweaty and calm.

Then I walked into the balwoo gongyang, a traditional monk meal, late. My tardiness rang through, and my exercise endorphins evaporated.

I felt like the crabby American, lacking language and patience to understand my surroundings. But it had been a billion degrees on that sleeping floor. I did all my bows. Why didn&#8217;t anyone take me seriously?

It was especially irritating because I like many aspects of Buddhism, I found out later when I read the pamphlet.

I like the idea that everything is connected, that each action ripples through time with good and bad possibilities. I like that Buddha is revered but not worshipped as in Christian or Judeo terms.

Anyone can become Buddha if he or she tries hard enough. This inner struggle is what it&#8217;s all about. Improve yourself, and don&#8217;t worry too much about your neighbor. Let each person try to be better, more thoughtful, and that should ripple out, too.

Instead I turned to the tasks at hand &#8212; tying bows and eating a radish that doubled as a scouring pad.

A monk&#8217;s meal starts with a bundle of four bowls, cloth, place mat, spoon and chopsticks all wrapped together with a piece of cloth. (Why didn&#8217;t they sell these at the gift store? Yes, there was a gift store. I suppose there&#8217;s one in the Vatican, too.)

Buddhists insist that no morsel of food should be left in the bowls &#8212; which our guide dutifully pronounced as bowels &#8212; lest the hungry ghosts of the world get a nugget of food stuck in their narrow throats.

No one ever explained why ghosts need food. The real lesson, I reasoned, was to avoid wasting food that had been thoughtfully grown, and prepared for me.

I could be wrong. I had slept on a bed of fire in August to keep off the morning chill, so my ability to deduce reason was a little off.

For dessert, we used a sliver of day-glo yellow radish to clean the bowls with a brownish liquid our guide called water, but I still hope was tea. Then we ate the radish (one of my friends pocketed hers) and drank the cleaning water.

Translation improved during a morning walk and an observation from one monk on my poor posture. It faded during a 90-minute tea ceremony.

Our rosary-making time was canceled with no replacement activity. I bought a soda and sat outside the tea shop, which wasn&#8217;t serving tea, and listened to the construction crew screech and hammer.

Some Koreans in the group spoke enough English to recognize my lack of Zen. This became clear when I launched my final argument with our guide.

He may have heard the sound of one hand clapping. I heard the other shoe drop.

I left what little Zen I had inside me at Jeongjoksan Temple. At the subway station, one monk gave us bracelets of Buddhist rosary beads, a sweet and generous gift that made me smile. Later, on the subway, our guide offered us a similar token before taking his leave.

Two bracelets on my wrist, I asked two of our temple-stay companions, a Korean couple from Busan, if they thought their trip worthwhile.

The young man, a former member of the Korean military honor guard, said he learned a lot and the food was good. The heated floors were bad, yes. But overall, he said, it was worth it.

I was glad for him. And I was jealous for me. His experience partly had to do with language and the comfort of being in his own country. Partly, I was coming to realize, it had to do with his temperament.

I had gone to this temple with a hired guide and expected to be treated like a tourist. Instead, I was treated to a watered-down version of life as a Korean Buddhist monk. The translation should have been better. It wasn&#8217;t. Nobody should heat a house during a Korean summer; they did.

Maybe my frustrations were fueled more by my temper and less from my surroundings. Inner struggle, I thought. Yes, I see.