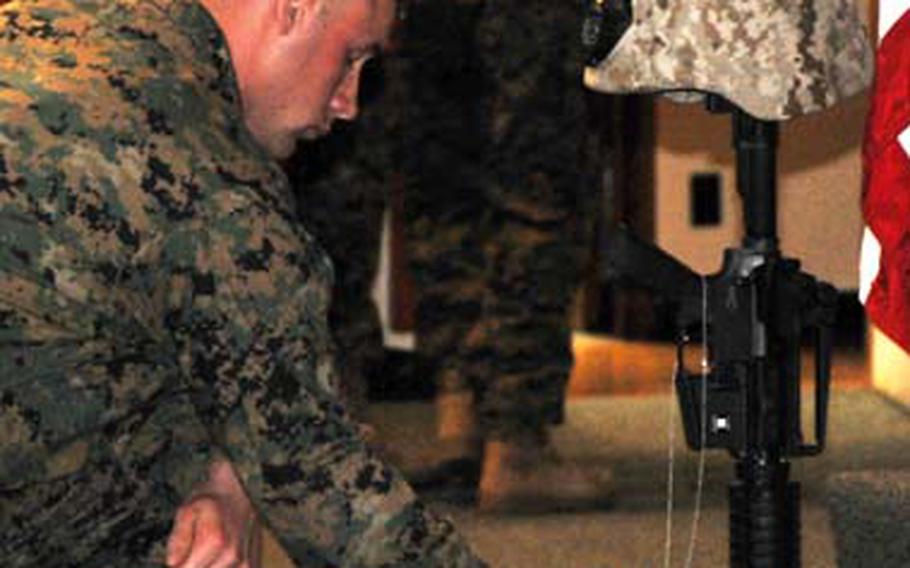 Medal recipientsThe following Marines and sailors earned medals for valor on Aug. 10, 2008, in the Al Jazeera Desert in Iraq.

The chaos for Gunnery Sgt. Robert J. Blanton continued long after the firefight.

"That night, I couldn&#8217;t sleep. I was trying to remember everything that happened," the 3rd Reconnaissance Battalion Marine said. He also tried to come to grips with losing Sgt. Michael H. Ferschke, 22. He was restless, reliving the battle with insurgents in the Al Jazeera Desert outside Baghdad.

"For a few of us, it&#8217;s like flipping through a photo album. OK, I remember that one, then I see another picture and try to place it and I remember now," Blanton said months after the Aug. 10, 2008, battle.

Some photos are out of focus and he struggles to put them in order. He recalls the battle lasting an hour and a half; others remember it as only 45 minutes.

But, Blanton knows this: Had Ferschke not been on point, going into the house first, drawing the fire of about 10 insurgents and allowing the rest of his team to enter the room and return fire, the day would have been a lot deadlier for the Marines.

The first days of August were hectic. First Platoon lived out of trucks while conducting counterinsurgency operations, said Capt. Luke Lazzo, 27, commander of Company A.

Aug. 10, a Friday, was another blistering day in "a desolate, what looks to be forgotten, part of Iraq," said Sgt. Chris Bova, 21. Temperatures hovered in the 120s.

By late afternoon, the team was looking for a place to bed down for the night, Sgt. Alexander Tice remembered.

The team came upon an abandoned adobe out in the middle of nowhere &#8212; or something that could easily pass for it. As team leader, Ferschke decided it would be the last house they cleared before calling it a day.

"We had been sweeping every house we passed," Bova said. "This was just as deserted as the rest of them."

He remembers people were fishing on the lake a mile beyond the L-shaped house. Nothing unusual; no sign of trouble.

Tice, as point man, was usually first to enter buildings.

"Every house before that, I was the first one in. But that day, [Ferschke] was just happy to be there and just went to the front," Tice said.

Ferschke was met with a hail of AK-47 fire, but plowed on to a corner of the room, drawing everything to him.

"It was all that Monster (energy drink) he drank," Bova said, looking at Tice and chuckling.

With the insurgents focused on Ferschke, the rest of the team made it to an opposing corner where they returned fire. The Marines were exposed while the enemy was firing AKs and throwing grenades from protected positions.

Through the smoke and dust, Tice saw Ferschke go down.

No time to be scared

"We were outnumbered and outgunned," Tice said.

He knew he had to get his guys out of there. Tice had the team fall back to their vehicles, returning fire on their way out.

Soon, the rest of the platoon converged from the surrounding area. The radios came alive.

They nailed down where Ferschke was "so they could direct their fire away from his position as no one knew if he was dead or not," Tice said.

Though Tice didn&#8217;t talk about it, he was wounded as he returned fire to the enemy.

"An enemy inside tossed a grenade out the door and he took fragments in his heel," Blanton remembered adding that Tice didn&#8217;t let that slow him down as he stayed in the fight till it was done.

It was the first firefight for all but four or five in the platoon. Everyone kept their cool, Tice recalled.

Sgt. George Callum dismounted, firing at insurgents and identifying targets for his Humvee&#8217;s main weapon. (Marines would not talk about the specific weapons they were using.)

Blanton recalled Callum darting from one end of his vehicle to the other shooting the whole time. After the battle, Marines counted about 20 hits on the Humvee but Callum never took a hit, Blanton recounted with admiration.

But the house, with its thick walls and small windows, proved to be an effective barricade for the insurgents.

Blanton was in a 7-ton truck carrying the platoon&#8217;s supplies. He told the driver to ram the building.

"That really opened it up," Bova recalled, leaning forward as he talked.

As the driver of the 7-ton backed the truck out of the building about 40 feet, a suicide bomber boiled out of the house, headed for the 7-ton.

Blanton thanked God for his truck&#8217;s design, which included door handles that were difficult to operate. The bomber couldn&#8217;t figure out how to open the door, he said.

"He had a vantage point when the individual came out to try and gain access to our (truck)," Blanton recalled.

Bunney took aim with his weapon and mowed the bomber down.

As the bomber slumped off the truck he detonated himself, an explosion that rocked the truck but did no damage to its interior.

"At that point, the adrenaline was up and we didn&#8217;t know what happened," Blanton said. The truck out of commission, it was time to slug it out at close range.

Then, Blanton&#8217;s driver saw an insurgent in the building who was surrendering.

"We took charge of that guy," Blanton recalled matter-of-factly. He helped secure the prisoner before getting back to the fight.

Callum moved from a covered position and a grenade went off several yards from him, knocking him down but leaving him unharmed.

Enemy fire let up a bit. Their thoughts turned to getting Ferschke out of there.

Lazzo and Blanton led separate teams back into the building.

"All my thoughts were on getting him out as fast as we could," Lazzo said.

Someone saw an insurgent priming a grenade amidst the rubble and yelled "Grenade." One Marine jumped from the building to avoid the blast, but Callum used his body to shield a fellow Marine.

When they got to Ferschke, he was gone.

After they got his body out of the building, Blanton called in close air support. Game over.

As one Marine put it, it was a "trial by fire."

"Everybody out there was exposed to enemy fire just trying to get the job done and defeat the enemy," Callum said with a shrug of his shoulders as he downplayed his actions. "We just focused on the job."

Several attributed their success &#8212; their survival &#8212; to training and muscle memory.

"In extreme stress, you just go off. Your body just reacts from what it knows. It&#8217;s muscle memory," Bova said.

If this had happened in 2006, it might not have attracted as much notice, Bova said.

But their battle happened in 2008, a relatively quiet year in Iraq. And in the first four months of their seven-month deployment they had little interaction with the enemy, the two said. Stumbling on to an enemy cell like they did &#8212; and losing Ferschke &#8212; are what make this battle stand out, Tice and Bova said.

But every servicemember knows that no matter how quiet it seems, it&#8217;s still a war zone, Bova said.

"At every building, the adrenaline still goes up. You go from yellow to red. If you&#8217;re ever at green, you&#8217;re wrong," he asserted, leaning forward to make his point.

Looking back, the memories are foggy, perhaps intentionally, Bova said shaking his head. It&#8217;s his way of coping.