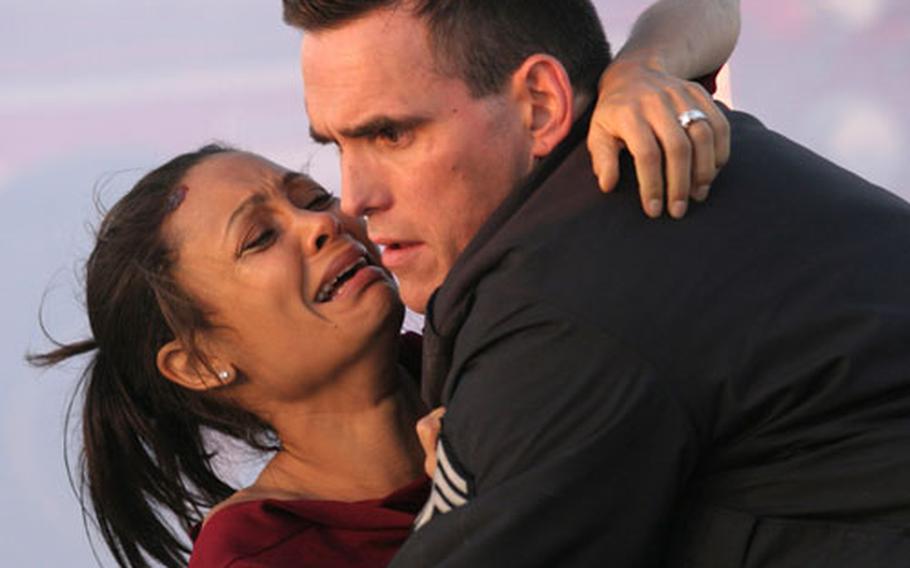 Actors Thandie Newton, left, and Matt Dillon in a scene from “Crash,” the movie Stripes’ couch critic would give the best picture Oscar to. (Lions Gate Films / AP)

Seen any of the 2005 Academy Awards nominees?

The group returns for its third year of watching, debating and selecting who they believe deserves to receive the award. Check out the show on March 5 to see if Oscar voters agreed.

The movie that generated the most conversation among the critics was &#8220;Brokeback Mountain,&#8221; a drama involving a gay relationship between two sheepherders that begins in the 1960s. Stateside, the movie has received a ton of hype and has been rewarded with a BAFTA and a Golden Globe and is the critical favorite going into this Oscars.

Several were frustrated with the movie, especially its ending.

Pat was bothered about the way the buildup defined the movie as a love story, but Kate said she didn&#8217;t think it was a love story at all.

The critics did appreciate the challenge Heath Ledger faced in his very understated role in &#8220;Brokeback Mountain,&#8221; and a vocal minority pushed for Terrence Howard, who played a pimp in &#8220;Hustle and Flow,&#8221; especially as it is an original, fresh role. Some of the critics were concerned about how some actors might be perceived as impersonating, rather than portraying, and might suffer in comparison to Jamie Foxx&#8217;s Oscar-winning turn as Ray Charles in 2004.

Paul Giamatti led the early discussion, a nominee in the best actor category last year for his turn in &#8220;Sideways.&#8221;

But it was Matt Dillon&#8217;s role as a racist cop that impressed the critics.

But not Huffman, who plays a man in the midst of sex-reassignment surgery who discovers he has a son. The pair then take a cross-country trip together. It&#8217;s a departure from her &#8220;Desperate Housewives&#8221; role (started after the completion of &#8220;Transamerica&#8221;).

First up: Amy Adams, who fully realized her role as the flighty, pregnant sister-in-law in the Southern family drama &#8220;Junebug,&#8221; and already has taken home a Screen Actors Guild honor.

But our kudos ultimately go to Rachel Weisz for her role in &#8220;The Constant Gardener.&#8221; Weisz has earned the BAFTA and Golden Globe nods for the role.

Chris wondered why she was in this category. &#8220;I was surprised she was up for supporting actress because she had as much screen time in that film as anybody, and &#8230; that was one of the best films I saw all year. Considering everything you see of her is in flashback mode. &#8230; It was really well done.&#8221;

Oscars for the rest of us

Stripes&#8217; Oscar critics didn&#8217;t limit their movie viewing to the best picture candidates. They also saw some other movies they declare winners:

Chris says that this movie was a surprise and credits it to Steve Carell. &#8220;It was priceless. Instead of just being all cheese jokes, there was actually some depth to it, and that was what surprised.&#8221; Karen points out that this flick is a cultural touchstone. &#8220;You can quote a line from that movie and almost everyone around you in any situation will know what you&#8217;re talking about.&#8221;

Kate says, &#8220;Watching &#8216;War of the Worlds&#8217; is a visceral experience. You&#8217;ll find yourself grieving for our overtaken planet while in the theater, feeling vulnerable and potentially under attack from aliens at any moment after you leave it, and grudgingly admitting that, for all his other issues, Tom Cruise is a darned fine actor. Dakota Fanning is, as always, terrific as his often-terrified daughter. The narrative technique and special effects add to the experience instead of being distractions, as they often are in other summer flicks.&#8221;

Danielle says, &#8220;Solidly put together and a wonderful re-imagining of &#8216;Batman.&#8217; The perfect balance of mood and writing, along with the talents of future Oscar winner Christian Bale, help to reimagine the dark hero as real rather than comic.&#8221;

Other movies to see: