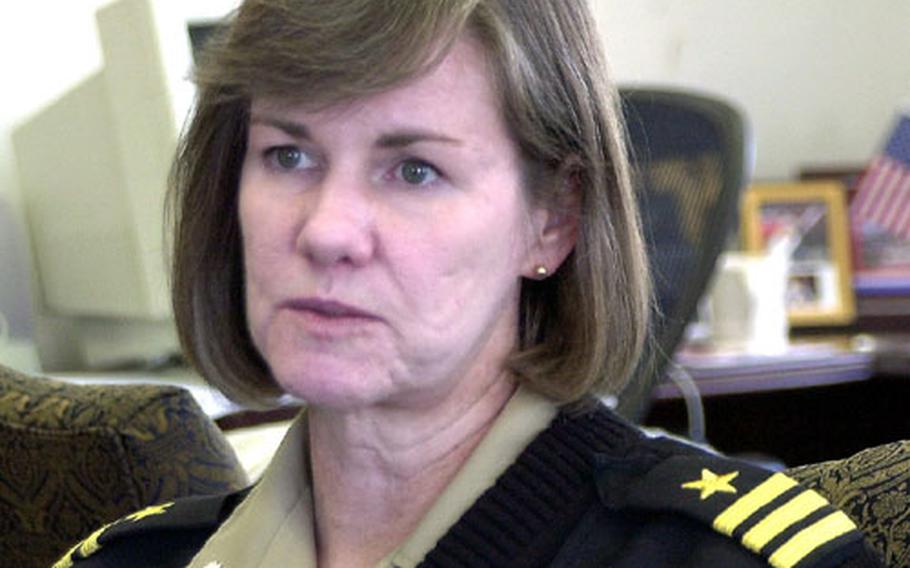 Cmdr. Carol Shivers, chief staff officer for Sasebo Naval Base, started her career in the Navy as an enlisted sailor. (Greg Tyler / S&S)

SASEBO NAVAL BASE, Japan &#8212; Looking back through a military career spanning two decades, Sasebo Naval Base&#8217;s chief staff officer says opportunities have expanded for women in the Navy, but there is still room for improvement.

Cmdr. Carol Shivers, 48, started her career in 1981 as an enlisted sailor, went to night school at Golden Gate University to complete her first college degree, and then earned her commission in 1986, accumulating valuable experiences to become a role model for young women making military career decisions.

For Women&#8217;s History Month &#8212; Shivers said she finds great value in annual observances focusing on various minority and ethnic groups &#8212; she recently reflected on her long career, the evolution of the military&#8217;s posture toward women &#8212; and what the future might hold for women in the Navy.

She started out working in the dental field. &#8220;There were a lot of women in the dental tech rating those days.&#8221; And working in dental also gave her the freedom to attend the night classes she desired.

After earning her commission as an officer, she graduated from the Naval Postgraduate School in Monterrey, Calif., and during her career held two positions in Washington, including a stint with the Bureau of Naval Personnel before the operation moved to Millington, Tenn. Immediately before Shivers&#8217; assignment to Sasebo, she was on the Pentagon&#8217;s Chief of Naval Operations staff.

She and her husband David &#8212; a Navy retiree &#8212; arrived in Sasebo about one year ago. As second-in-command to base skipper Capt. Michael James, she is in the midst of her second tour in Japan. Several years ago, while the couple was assigned to Yokosuka Naval Base, Shivers served as the officer in charge of the Personnel Services Department.

Even though she&#8217;s done well in her own career, Shivers thinks the Navy&#8217;s leadership needs to make more of a commitment to women sailors. &#8220;I think &#8230; the Navy still has constraints on the equal assignment of women, and that is the number of racks at sea for women,&#8221; she said.

&#8220;I would like to see the Navy make a decision: either constrain the recruiting of women so that we can accommodate women equally on future rotations, or make the investment to provide more sea duty opportunities for women, and provide the same types of career paths. We&#8217;ve always sort of done it a little bit of both ways.

&#8220;We have some sea duty opportunities for women, but I don&#8217;t think it is at the point to where women and men have the same sort of sea/shore rotation opportunities,&#8221; Shivers added.

In recent years, when recruiting was difficult, the Navy increased the number of women recruited. This was done, she said, while &#8220;not really paying enough attention to how women are going to be constrained&#8221; in their Navy careers.

If the Navy really wants to provide an equal opportunity career path to women, then &#8220;we have to make the conscious corporate decision that we&#8217;re going to make an investment in that area.

While growing up Shivers, who graduated from high school in Naples, Italy, admired several women of the day, especially women such as Eleanor Roosevelt who worked to make a difference in their country. These days, she says, one woman she admires is Sen. Hillary Clinton, D-N.Y.

&#8220;What an interesting woman. Especially when you look at her background, and how she has done marriage, career and mom,&#8221; she said. &#8220;I think she could be the proto-typical 21st century woman based on her attempts to merge all those things together.&#8221;

On Sept. 11, 2001, Shivers was at the Pentagon when terrorists attacked, but, luckily, she was away from her office at the time of the attack.

She is reluctant to discuss that tragic and horrid experience, but said she came away with an enriched perception of what it means to be a member of the military, and to serve one&#8217;s country.

So, with 22 years of experience to her credit, what advice would Shivers offer young women considering a career in the military?

&#8220;One of the things about the military that I would say is that it&#8217;s not for everybody. You have to like order and organization. But it offers tremendous opportunities for travel, for life experience and job (experience) working with other people,&#8221; she said.

&#8220;One piece of advice I give, and not just to women, is to use the military to your own advantage every step of the way. Always leave your options open. Use your benefits. Use your opportunities.