On Okinawa, families show respect for the dead with tradition 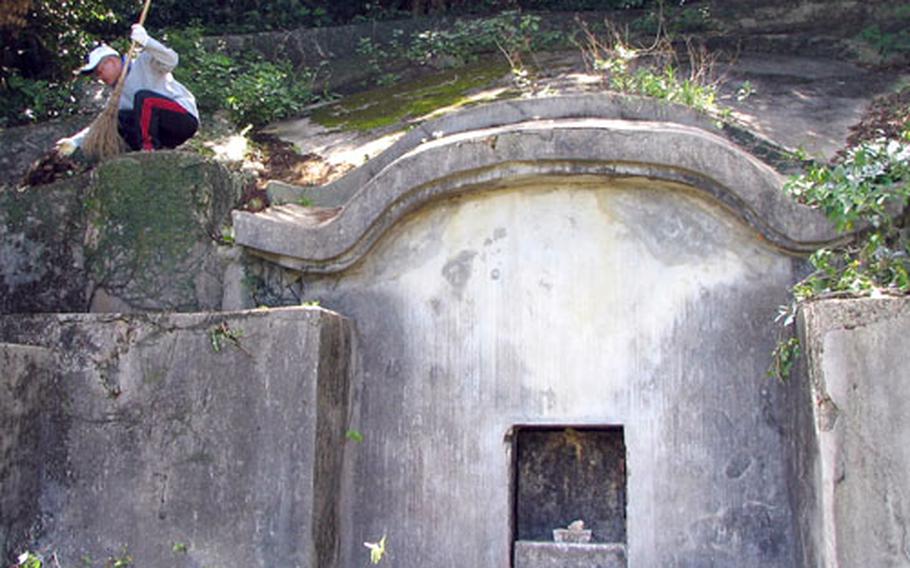 Isao Tsuha cleans brush from his family&#39;s centuries-old tomb on Okinawa in preparation for the annual shima festival, a time when families gather at the tombs of their ancestors for prayers, good food and a good time. (David Allen / S&S)

Isao Tsuha cleans brush from his family&#39;s centuries-old tomb on Okinawa in preparation for the annual shima festival, a time when families gather at the tombs of their ancestors for prayers, good food and a good time. (David Allen / S&S) 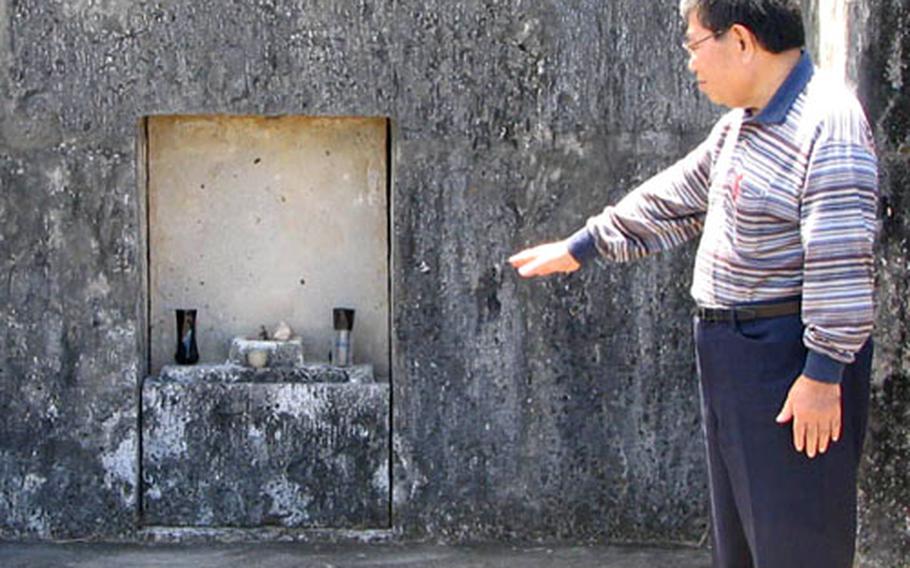 Gisho Nakama, the former curator of the Yomitan Folklore Museum, explains the importance of the annual shimi festivals, when Okinawans gather for picnics at their family tombs, leaving food, drink and burnt fake money for their ancestors&#39; use during the coming year. (David Allen / S&S) 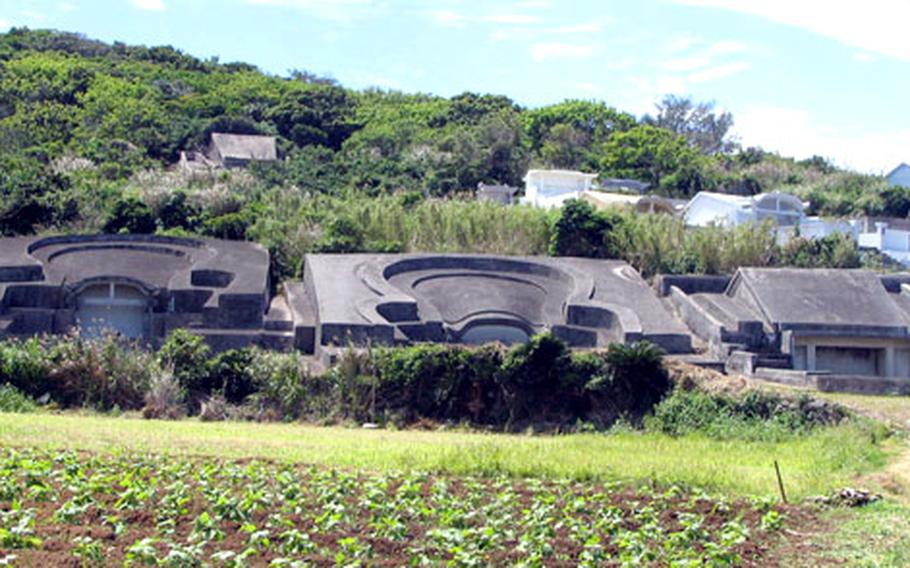 Okinawa turtle back tombs and the more modern "house" tombs dot a hillside in the Nagahama district of Yomitan. Adopted from China in the 16th century, Okinawans reinterpreted the meaning of the turtle shapes, believing the tombs represented a woman&#39;s womb. (David Allen / S&S)

Throughout April, Okinawa families gather at the distinctive tombs that contain the remains of their ancestors in a tradition that might seem strange to Americans.

The occasions are less solemn than one would suppose. After a brief ceremony that includes prayers and the burning of paper &#8220;money&#8221; for the deceased to use during the coming year, children can be seen laughing and playing while the adults share food and drink. Often, someone will be strumming a sanshin, an Okinawan three-stringed banjo, and an old folk song or two will be sung in hogen, the local dialect.

It&#8217;s &#8220;shimi&#8221; time on Okinawa, and family members are already hard at work throughout the islands, cutting bushes, trimming trees and picking up trash around the tombs in preparation for the family gatherings.

The cleanup is almost as important as the annual picnics, says Gisho Nakama, the former curator of the Yomitan Folklore Museum. Okinawans believe their ancestors keep a constant watch over them.

Some Okinawa family tombs date back hundreds of years and are shaped like the backs of turtles. Inside are the bones of generations of ancestors.

The turtle back-shaped graves have their roots in China, Nakama said. They were adopted at a time when Okinawa, as the Kingdom of the Ryukyus, was an important seafaring nation whose sailors brought back goods and culture from throughout Asia.

The turtle was considered a sacred creature in ancient China. But Okinawans put a slightly different spin on the meaning of the shape of the tomb.

&#8220;In the Ryukyus, the turtle-shaped grave, or kikkobaka, is said to be a shape of mother&#8217;s womb, from where everyone is born and from there everyone returns,&#8221; Nakama said.

The tombs come in several sizes.

&#8220;The largest grave is a community grave where residents of an entire village are buried,&#8221; Nakama said. &#8220;The next largest is a tomb usually shared by friends, who were not related by blood but bonded by friendship. They jointly purchased their tombs.

&#8220;The next largest are graves for extended family, called monchu in Okinawa. This is a grave for people related by blood of the paternal line. Then, there are smaller tombs just for the immediate family &#8212; parents, their children and their families.&#8221;

The largest family tomb on Okinawa, in Itoman, is known as kochibara monchubaka, where about 5,000 people can be buried, Nakama said. The grave site is about 17,800 square feet in area.

Since the largest tombs can cost as much as a home, a recent trend on Okinawa, especially in urban areas, is to build smaller family tombs that are shaped like small homes.

&#8220;In the traditional Okinawan burial style, the body of a dead person was kept in a coffin for a couple years until the remains became skeletal. Family members, mainly women, then would wash the bones in front of the grave before placing them in an urn,&#8221; he said.

Nakama said the shimi is a festival to celebrate the New Year&#8217;s Day for the dead. In the old days, Okinawans celebrated on the lunar new year in January, but the timing changed with the adoption of the Chinese customs. By the 15th century, the date for shimi shifted, although it remains on the Lunar New Year on some outer islands of the prefecture.

On Okinawa, shimi now is observed during April, usually on a Sunday.

&#8220;The people gather at their monchu, offering food and drinks to their ancestors while they entertain themselves,&#8221; Nakama said. &#8220;It is all right to be merry and have fun because it is a time to celebrate a happy occasion for the ancestors. Many colorful foods are chosen to prepare the feast. It is a good occasion for members of the entire family to gather and confirm their kinship and ties. It is through this tie that everyone is reminded of a need to be a responsible member of the family and the society.&#8221;

Some Americans may be surprised to see the sign of the cross etched into the side of some tombs. There are two reasons for the Christian symbol.

First, Okinawa has the highest percentage of Christians in Japan &#8212; 10 percent of the population.

Secondly, crosses were drawn on older tombs to warn foreigners that the tombs were, in fact, grave sites.

The tradition of shimi still runs strong among Christians. On a recent Monday, Isao Tsuha was cleaning brush from his family&#8217;s centuries-old tomb in the Nagahama district of Yomitan.