Okinawa’s only sword maker a far cry from Hollywood image 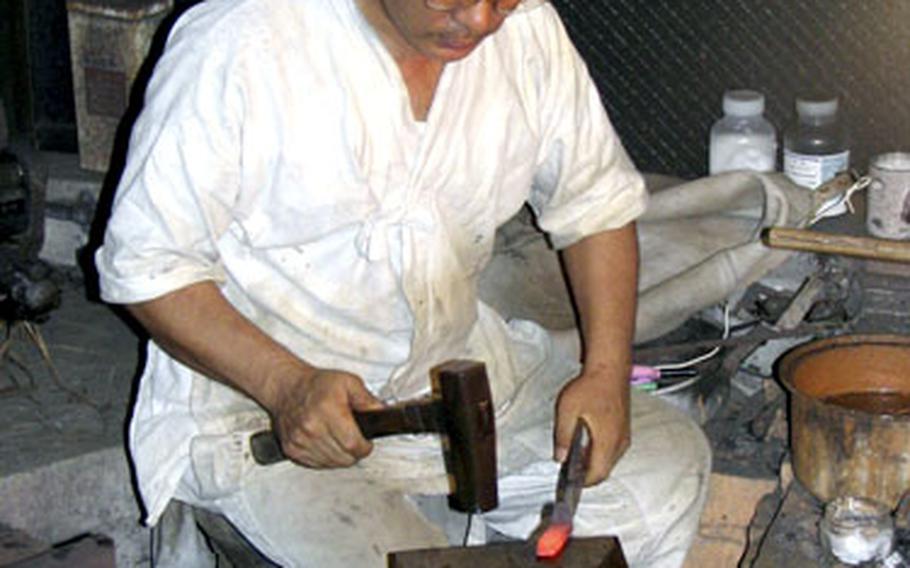 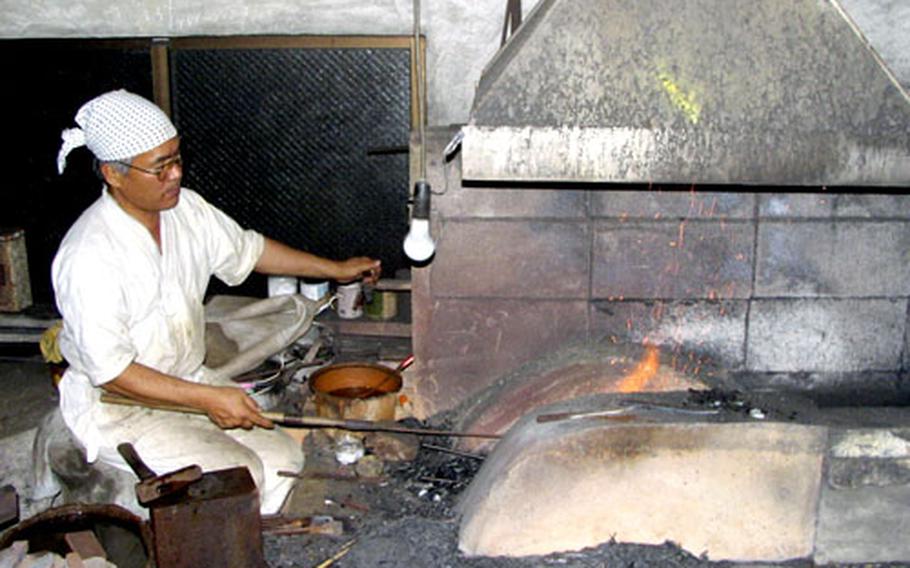 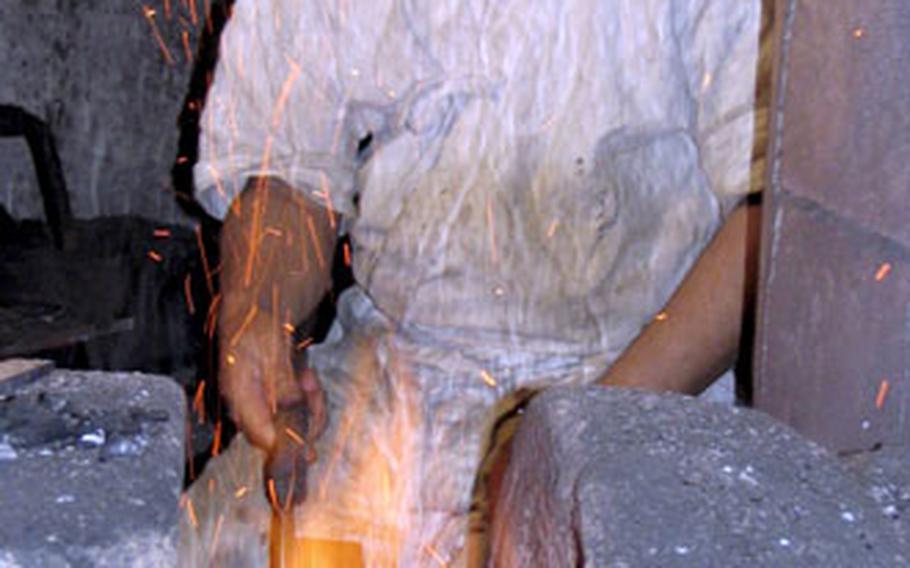 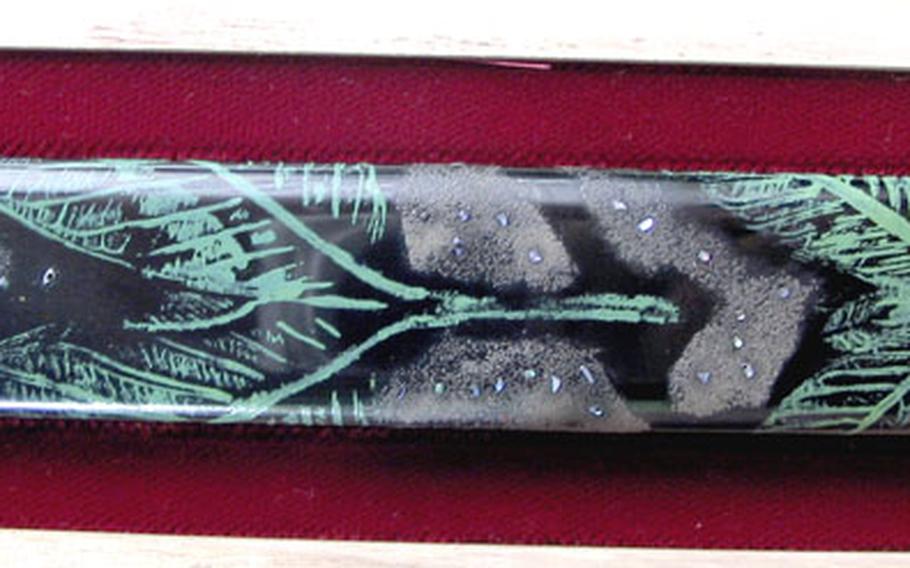 Kiyochika Kanehama’s wife, Junko, does the Okinawa lacquer work on the knives, letter openers and paperweights that her husband crafts when not making swords. (David Allen / S&S)

Kiyochika Kanehama spends his days sitting at a hot forge, hammering glowing lumps of iron ore into a steel works of art, Japanese katana swords renowned the world over for their beauty and strength.

But please, don&#8217;t confuse him with the Okinawa swordsmith Hattori Hanzo played by Sonny Chiba in the movie &#8220;Kill Bill.&#8221; Unlike Hanzo, supposedly the world&#8217;s greatest swordsmith who lives in seclusion on Okinawa and makes a special katana for Uma Thurman to use in dispatching her enemies, Kanehama would prefer his blades never be used.

And no, Kanehama, who is the only licensed sword maker on Okinawa, has never seen the movie.

&#8220;I admit, that I am conflicted each time I make a sword,&#8221; he said recently at his home and forge on a hill overlooking southern Okinawa. &#8220;Swords are weapons and I am opposed to using them to kill. But, at the same time, these are national treasures and the forging of a sword is a meditation, a blending of the human and earth into something beautiful, strong and sharp.

He became an apprentice to Kiyomune Miyairi, one of the foremost swordmakers in Japan, who taught him that each sword has the mark of the personality of its maker. He worked for nine years as an unpaid apprentice, mastering the art. In 1983, he moved to Okinawa.

Kanehama said he was overwhelmed by the sharpness of the first sword he ever saw, &#8220;But later, when I encountered an old sword which was registered as Japanese National Treasure, I was captured by its beauty and warmth. The elegant curve of the blade fascinated me. I discovered &#8230; that Japanese swords are not mere weapons, but they are manifestations of the spirit of Japanese culture.&#8221;

The work is hot, dirty and time-consuming. Sometimes a week&#8217;s work is ruined by a minor flaw in the carbonized steel and Kanehama has to restart from scratch, hammering the red-hot raw steel into swords in a 1,000-year-old process in which he covers a soft steel core with a hardened outer jacket.

The soft core, called shinganae, allows the sword to be flexible. The hard outer jacket, called kawaganae, gives the edge its famed razor-edged sharpness. Kanehama says only one of three swords he starts ever makes its way from his forge to the buyer.

It can take months to finish just one sword, which is one reason they are so expensive. A katana with a plain wooden scabbard costs upwards of $13,000. A shorter dagger starts at $5,500. Kanehama says he has made just 10 swords in the past nine years.

He said there is not much demand for swords on Okinawa, which has a centuries-old tradition of nonviolence.

&#8220;To make a living and to continue to make swords, I began to expand my work to other items, such as letter openers and paper weights, something that people can afford and use in their everyday lives,&#8221; he said.

And the really cool thing about thinking smaller, he said, is that his wife, Junko, has become part of the artistic process, using her skills in traditional Okinawan lacquerware to create a unique look to the hilts and casings of the small knives.

But don&#8217;t be fooled, Kanehama said. Although much smaller than the katanas, the letter openers he produces have the same spirit as the swords.

&#8220;The blade which is made out of the same tamahagane, (the raw steel made out of a special iron ore) and is forged through the same procedure,&#8221; he said. &#8220;It holds the same beauty and can convey the genuine quality of the larger swords.