Okinawa: It's a slippery slope to falls Buy Photo
Japanese mill about in the shallows of the swimming hole before venturing the short swim to the bottom of the falls. (Matt Orr/Stars and Stripes) Buy Photo
A Japanese father hangs from a vine which stretches over the creek. There were quite a few families that were hiking the creek, some even doing the trek in flip-flops. (Matt Orr/Stars and Stripes) 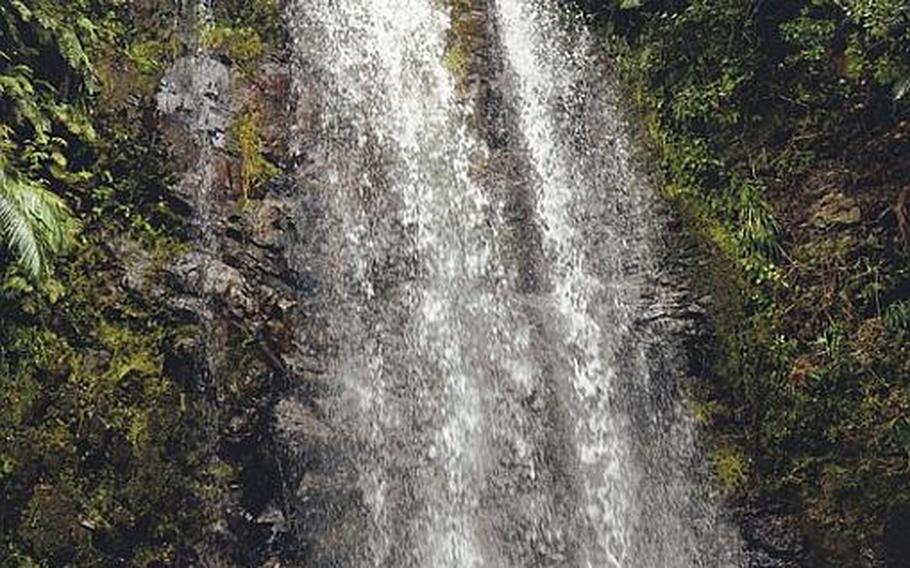 Buy Photo
The 30-minute trek to the 100-foot waterfall is well worth it; especially on a hot summer day and even more so when you include a swim in the cool waters at its base. (Matt Orr/Stars and Stripes) Buy Photo
Two small children try and catch some small fish in the shallows of the waterfall. The trek to get to the waterfall can be challenging in some places so parents with small children should be careful and watch their children at all times. (Matt Orr/Stars and Stripes)

During a scuba diving adventure last year off beautiful Kerama Islands, a fellow diver was singing the praises of a river trek he had done recently: Tadake Falls.

He was saying how beautiful it was and that at the end of the river there &ldquo;was this huge waterfall with a small water hole at the bottom you could swim in.&rdquo;

When we got back to dry land, he scribbled out some rudimentary directions to the location about 30 minutes north of Nago, Okinawa, off Highway 58.

Weeks slipped by and then winter came, and I really didn&rsquo;t feel like trekking in the cold.

But once summer was in full swing, I jumped in the car and headed north trying to make sense out of the directions.

It was a struggle.

I am not sure if he had been there recently, but the bridge he said to make a right after crossing was not a pale blue color as he described. So I kept driving, on the lookout for a pale blue bridge that doesn&rsquo;t exist. After a while, I came to the conclusion that I had gone too far. So I backtracked.

After another hour of driving, I came across the beginning of the river trek.

I pulled into a small dirt parking lot &mdash; big enough for four or five cars &mdash; and looked down to the creek and saw some young local children splashing about.

A sign with an arrow pointing up the creek was hanging from a tree over the water. I could see a small group of Japanese making its way back down the creek. All were wearing bright orange life preservers, clear evidence that this was the correct place.

The creek for the most part was ankle to knee deep and made its way through a lush tropical rainforest that blocked the harsh sun from beating directly down on you.

The creek is rocky and slippery in places so care should be taken to not slip and fall, which I managed to do on two occasions.

The sound of birds chirping was broken only by the sound of people splashing their way to the waterfall.

Where there is deep water, visible paths along the rocky creek bank can be taken. And, yes, these too can get quite slippery.

Half an hour of trekking up the creek, the sound of water crashing down from a great height filled the forest.

Turning a bend in the creek, a waterfall with water billowing down from its heights came into view.

Exhausted from the long drive and the roughly 30-minute trek, I jumped into the swimming hole and joined five Japanese enjoying the refreshing water.

The cool waters were a welcome relief to the hot weather and I swam over to the bottom of the falls and hoisted myself on the rocks, letting the waters wash over me.

Standing there being pounded by the water, it was clear why this place was so popular with the locals.

It is a great little trip with beautiful scenery, and a great reward at the end.

And now that I know how to get there, I plan on going again.

The name: Tadake, which means great falls in local dialect

Directions: Take Highway 58 north, passing Nago, and continue to drive the highway for about half an hour until you see a 900-foot-long concrete bridge.

Turn to the right immediately after the bridge and proceed on the southbound road until you see a river on your right. There will be no sign for the falls, but this is a point where the trek starts.

(Note: The road after the bridge is currently under construction. Until the road repair work is done, turn to the right before passing the bridge. The detour road will eventually connect to the road that takes you to the trail that leads to the waterfalls.)