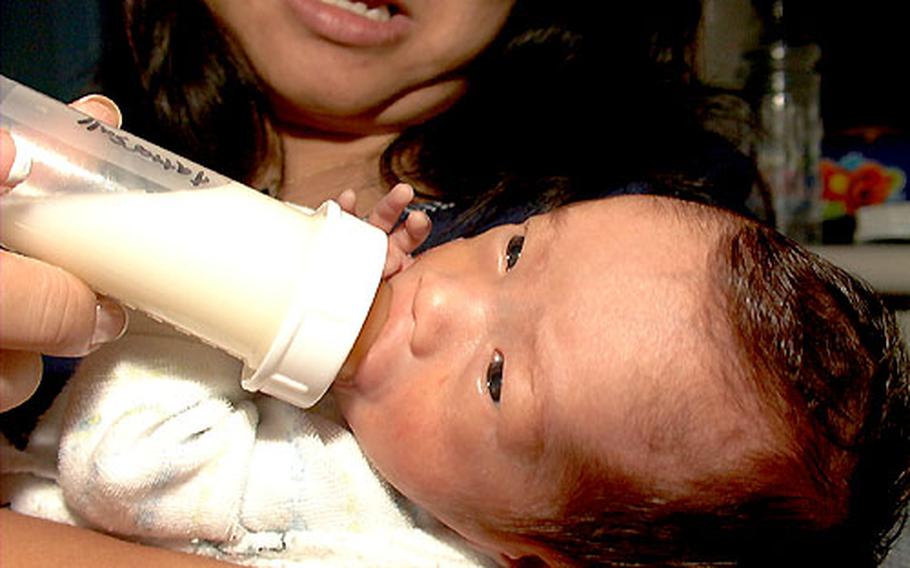 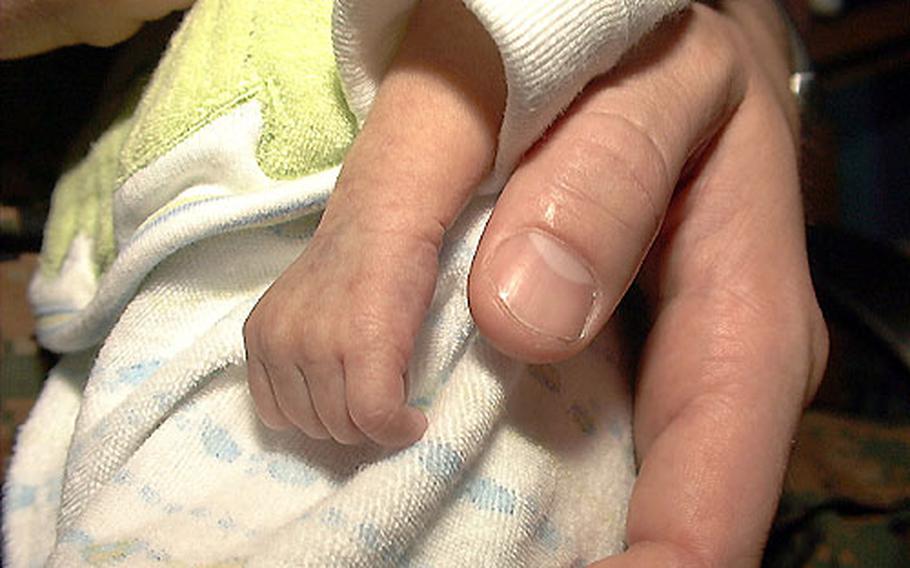 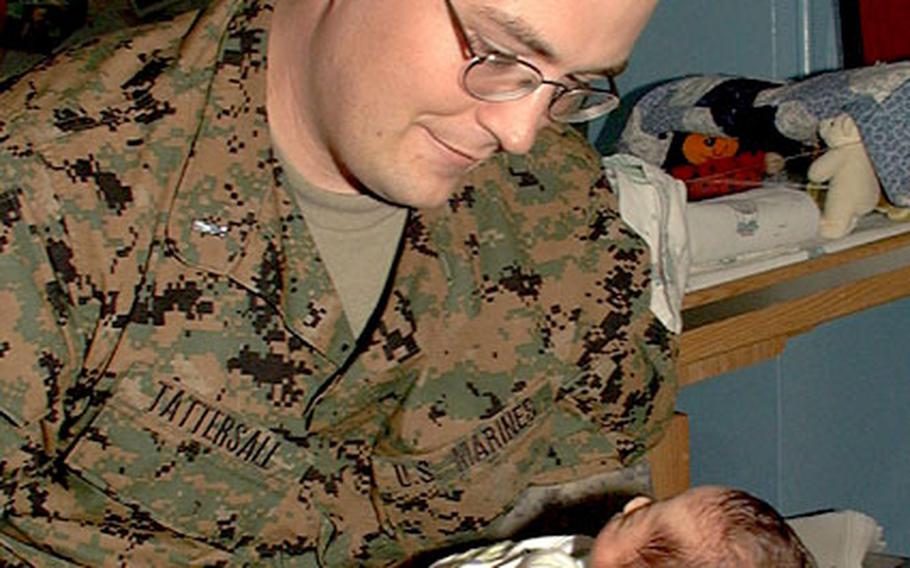 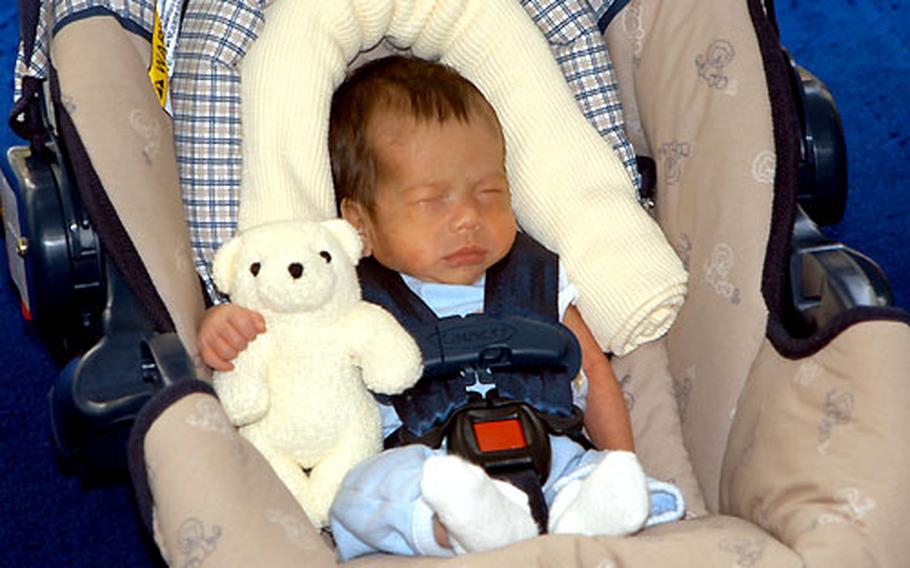 CAMP LESTER, Okinawa &#8212; Evan Bradley Tattersall is everything his parents dreamed of. Ten tiny fingers. Ten tiny toes, and a full head of black hair. He just wasn&#8217;t supposed to be born so early.

Rewind to April. Simone Tattersall headed in for her morning ritual at Okinawa&#8217;s U.S. Naval Hospital. She was listed as a high-risk pregnancy; she developed gestational diabetes and high blood pressure during her pregnancy with her first son.

She arrived on time for her fetal monitoring appointment.

The morning of her appointment, Brandon attended his scheduled staff meeting at Marine Corps Air Station Futenma. His cell phone sat next to his notebooks, a just-in-case measure if something went wrong. At the hospital, Simone lay back as heart monitors and ultrasounds powered up. The technicians&#8217; faces were grim: They couldn&#8217;t find any movement. There was a heartbeat, but it was falling &#8212; and fast.

&#8220;They literally ran me over to labor and delivery,&#8221; Simone recalled. &#8220;I was in the wheelchair and the corpsman was running down the halls. I was asking the nurses to call Brandon and tell him what was going on.&#8221;

Simone was headed for an emergency Caesarean section.

Brandon&#8217;s cell phone started buzzing, but he initially ignored it. A first lieutenant doesn&#8217;t exactly walk out of a staff meeting with lieutenant colonels. Whatever it was would have to wait. No one should have been calling &#8212; and besides, the baby wasn&#8217;t due for another seven weeks.

Once the meeting was over, he called back. The news floored him.

Scary because Evan was just 2 pounds, 15 ounces. Scary because the 16-inch-long baby was premature and that brought serious risks.

Brandon followed doctors down the hall as they wheeled Evan&#8217;s incubator to the Neonatal Intensive Care Unit, where premature and sick babies from many Pacific military bases come for care. Nearly 300 babies come through the NICU every year. Some, like Evan, are born at the Okinawa hospital. Others come from South Korea, mainland Japan or Guam. Some mothers in high-risk pregnancies even travel to Okinawa, just in case.

The next closest NICU is Hawaii&#8217;s Tripler Army Medical Facility.

The NICU can be a daunting place for new parents. Monitors constantly buzz and beep. Numbers on computer screens flash. And babies, many times small enough to cradle in both hands, are wrapped in a maze of wires and probes.

Brandon watched as doctors and nurses worked over his son, who weighed less than a half-gallon of milk. Tubes ran into the infant&#8217;s nose.

In three weeks, he gained almost a pound.

Now, his little eyes open up at feeding time. He drinks out of special bottles, only about 2 ounces at a time. His diapers are tiny, but his care is big. Four doctors, 16 nurses and 12 technicians hover over him and the other babies 24 hours a day.

That&#8217;s because of the care, Brandon explained. Nurses showed the Tattersalls how to diaper their son. They showed them how to feed their baby, who is so young that sucking on a bottle or his mother&#8217;s breast is still not a completely natural instinct.

For the first few days, the new father said, he was afraid to touch Evan, but the staff encouraged him to get involved.

The staff, Simone said, offered help every step of the way. She peppered the technicians with questions: What if he falls asleep while eating? Can I leave him asleep in the car seat? Should Evan be swaddled all the time?

But the job can be taxing. Not every baby is a success story, Hawk said. Premature births put children at higher risk for developmental difficulties. And dealing with the death of a child is a reality.

The good, she said, outweighs the bad. For all the times they have to prepare and counsel parents that a baby faces uphill battles, sending a baby home makes up for it.

When the Tattersalls spoke with Stars and Stripes, Evan was due to go home in about three days. They&#8217;re excited about the idea of finally bringing their son home, but anxious about leaving the safety of the NICU behind.