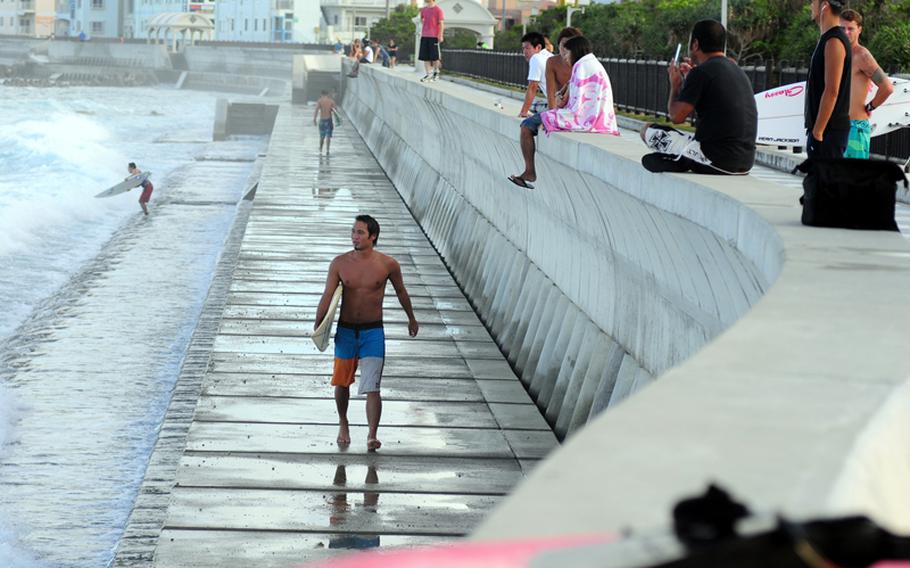 The surf at the seawall comes alive during typhoon season. Many American and Japanese surfers surf the shallow reef that extends about 100 yards from the walkway. In big surf, the walkway is inundated with spectators looking at the large surf and daredevil surfers. (Matt Orr/Stars and Stripes)

The surf at the seawall comes alive during typhoon season. Many American and Japanese surfers surf the shallow reef that extends about 100 yards from the walkway. In big surf, the walkway is inundated with spectators looking at the large surf and daredevil surfers. (Matt Orr/Stars and Stripes) 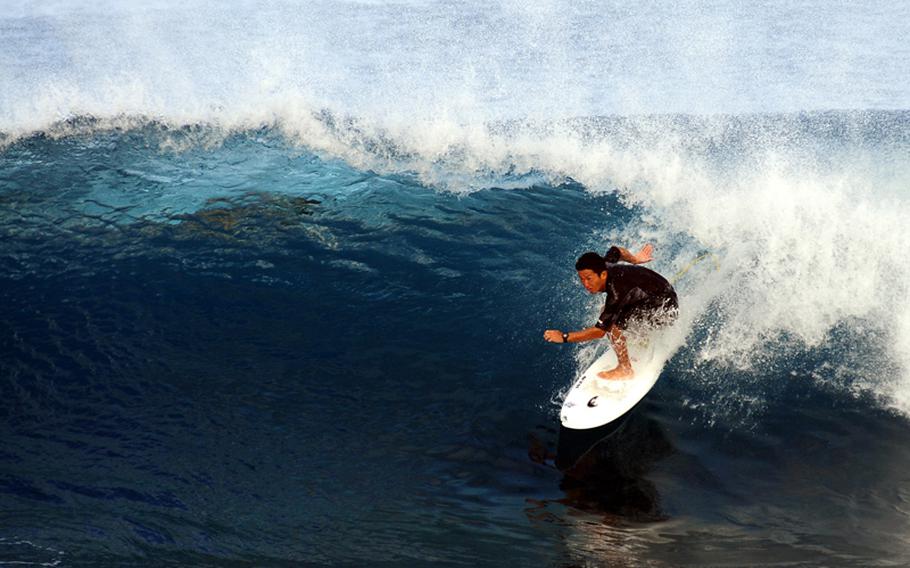 A local surfer rides a wave at the Seawall after a typhoon narrowly missed Okinawa. There are multitudes of surfing spots located along the seawall that really get hopping when the conditions are right. (Matt Orr/Stars and Stripes) 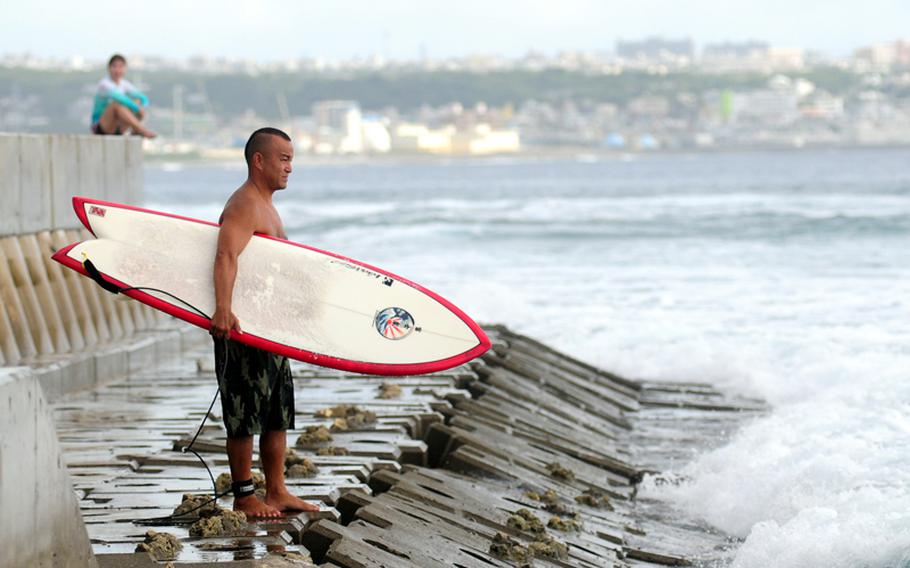 A surfer waits for a break in the waves before making a mad dash past the break over the shallow coral reef. In big surf the skills of experienced are really put to the test over this shallow break. (Matt Orr/Stars and Stripes) 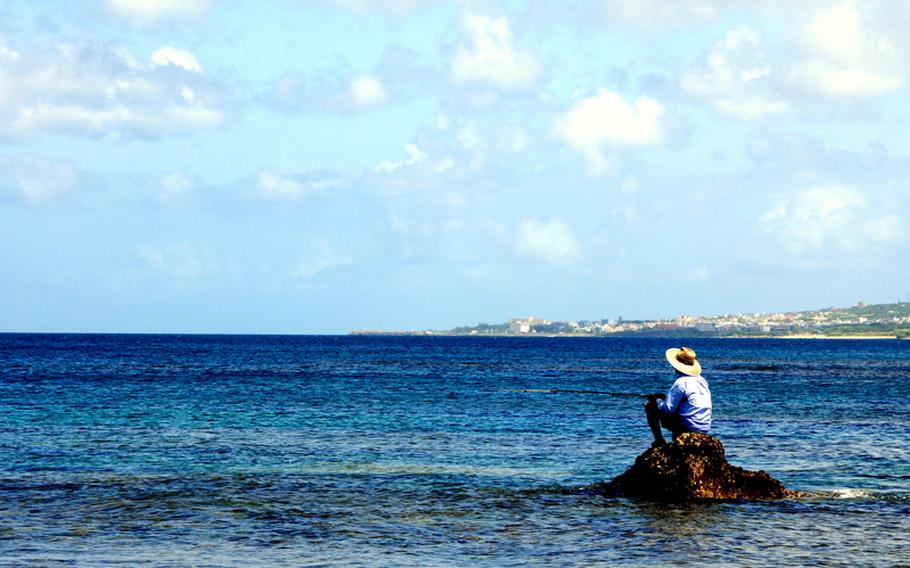 Fishing is a very popular past time for the local Okinawans. During a recent very low tide this fisherman walked to the edge of the coral reef and fished the drop off while the tide was low. (Matt Orr/Stars and Stripes) Construction is still being done on the seawall walkway which will stretch the entire waterfront once completed. It will be significantly wider than it was to allow more people to use it at once, while also allowing bike riders to use it as well. The walkway is very popular with locals and Americans who use it for exercising and walking their pets. (Matt Orr/Stars and Stripes) 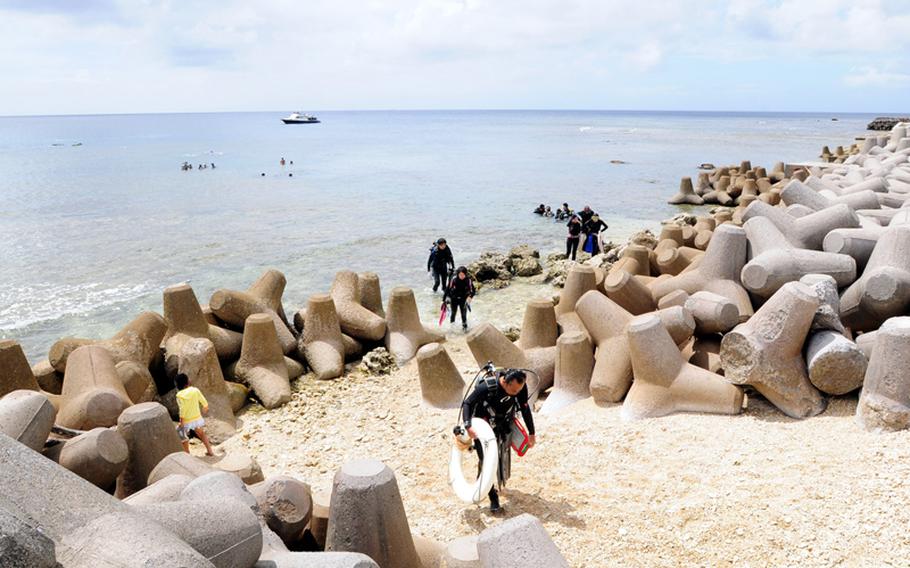 Scuba divers exit the water after a dive. The area has a wide diversity of hard and soft corals as well as a wide variety of fish to keep scuba divers entertained. During calm weather, the area sees a huge influx of scuba divers gearing up a heading into the water. (Matt Orr/Stars and Stripes) 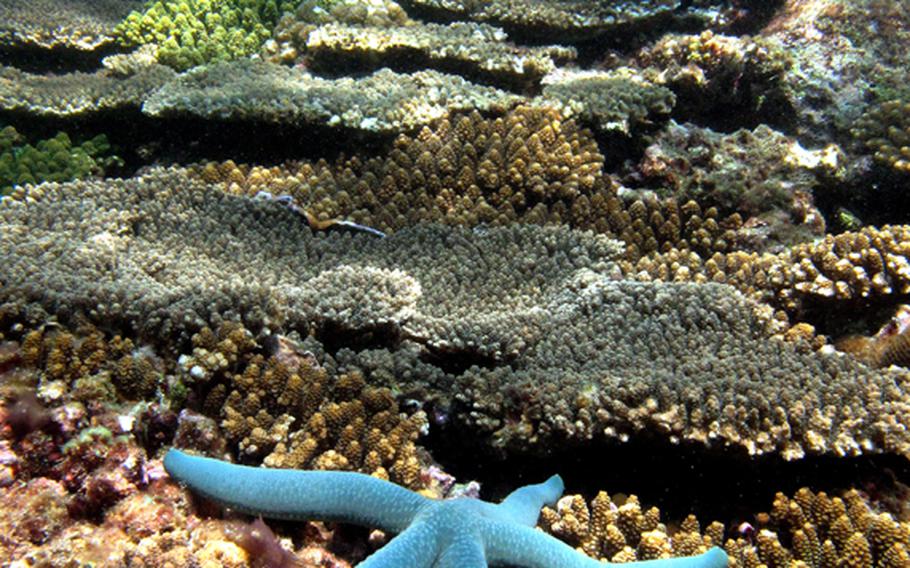 A starfish basks in the sunshine on the shallow seawall coral reef. It is one of many species that inhabit the reef a stone's throw from the seawall. (Matt Orr/Stars and Stripes) 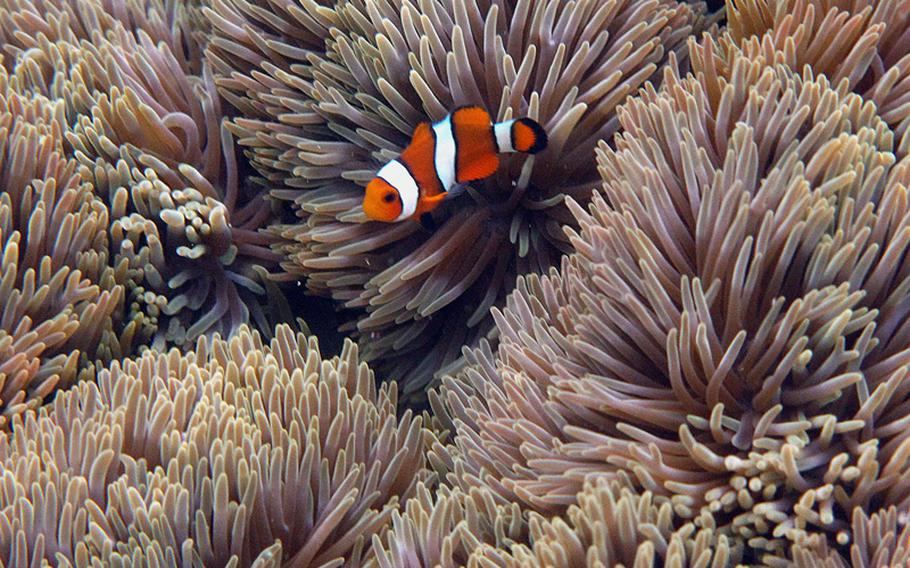 A clown fish swims amongst the tentacles of its host anemone. There are many varieties of clown fish that live in the limbs of their hosts along the seawall. (Matt Orr/Stars and Stripes) 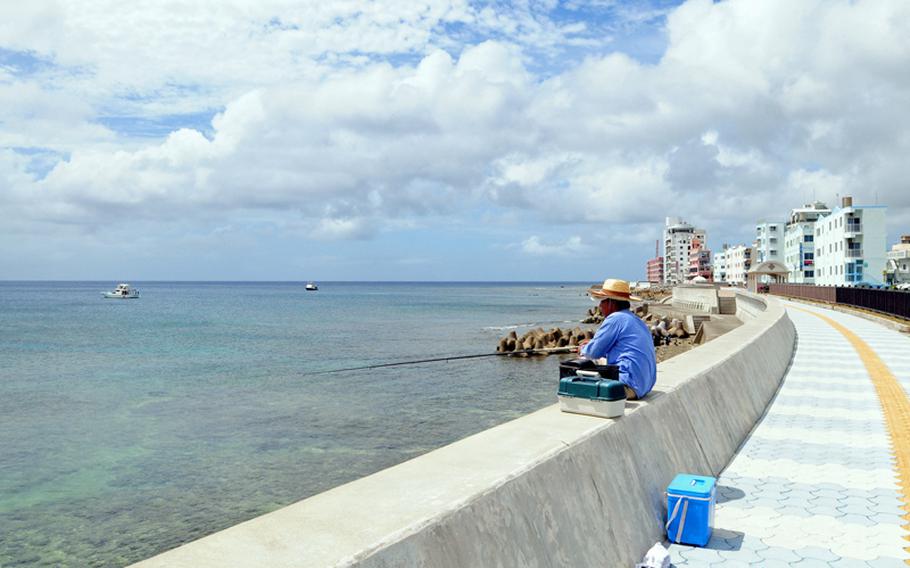 The newly constructed walkway along the Sunabe Seawall on Okinawa is used by many, including those who fish. (Matt Orr/Stars and Stripes) 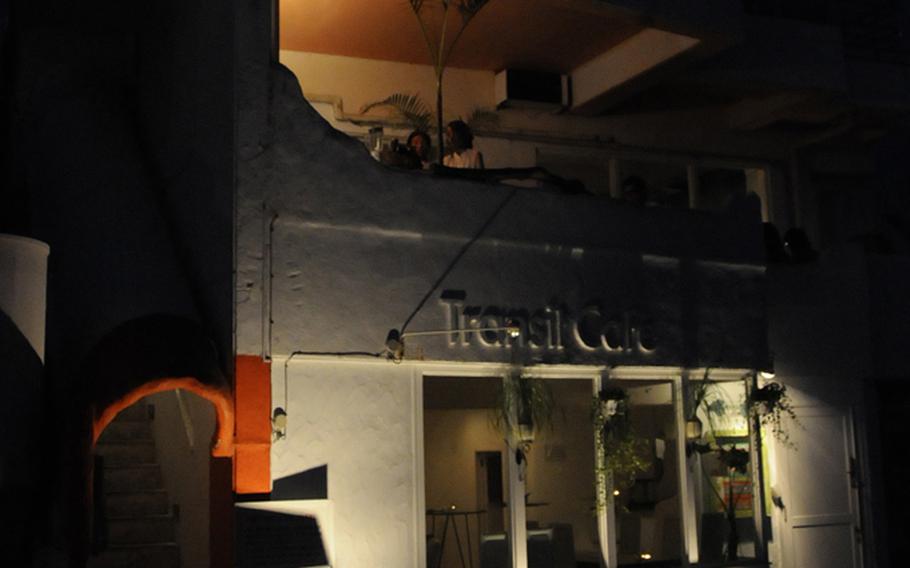 The Transit Cafe is one of many restaurants along the seawall and surrounding streets that has become a very popular haunt for Americans and locals alike. The balcony tables are often booked by diners in order to get a great view of the tropical sunsets. (Matt Orr/Stars and Stripes) Sunsets at the seawall are truly spectacular. (Matt Orr/Stars and Stripes) 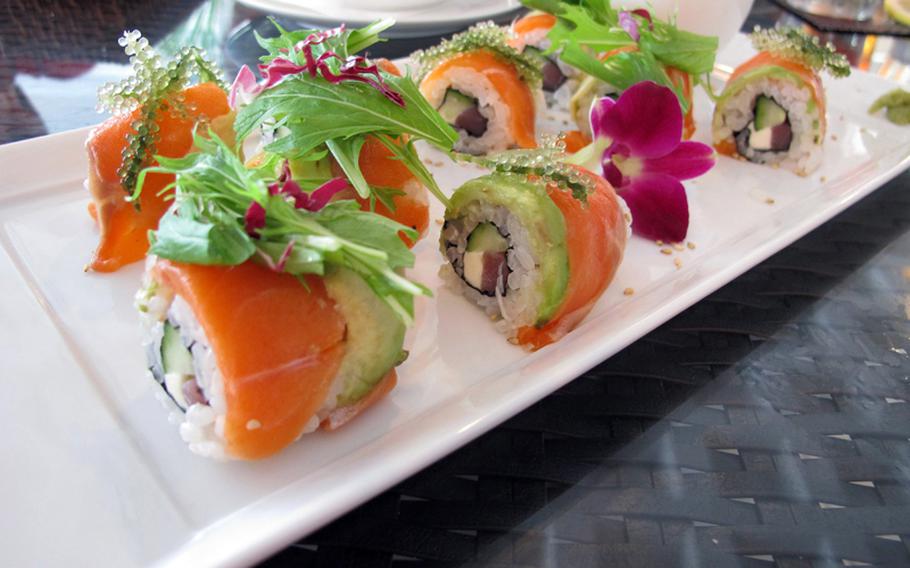 Sushi rolls from the Sea Garden restaurant are a great meal choice. The restaurant has a great eating area that overlooks the harbor area and American Village. The restaurant itself is located at the far southern end of the Sea wall. (Matt Orr/Stars and Stripes)

If you were to ask anybody who has been stationed here about the Sunabe Seawall, they would not only be able to tell you where it is, but they would also likely recount some great times at &ldquo;the seawall.&rdquo;

The seawall, located two minutes from Kadena Air Base&rsquo;s Gate One entrance, is a very popular area for servicemembers to live and play.

Scuba diving, snorkeling, surfing, running, skateboarding, walking the dog or taking a leisurely stroll along the boardwalk are all commonplace at the seawall. Of course, it&rsquo;s also a great place to have a cold drink with friends and take in the sights.

And there are plenty of things to see, from beautiful sunsets and people to the occasional oddity &mdash; I once spotted a young Japanese lady perched on the cement barrier reading a book with her small pet owl resting on her hand.

If you&rsquo;re into scuba diving, the seawall is a good place to head to. Any day when the waters are calm, you will see dive shops with their air tanks lined up outside ready to accommodate the throngs of Japanese tourists itching to jump into the clear turquoise waters and check out the beautiful sea creatures that live among the coral gardens only a stone&rsquo;s throw from the boardwalk.

As one might expect, numerous restaurants and bars are located in the area, including The Transit cafe, a favorite haunt for many Americans. Located above another restaurant, The Transit really sets itself apart with its great food and delicious cocktails.

Other great restaurants include Restaurant FAB, The Curry Buffet, Pizza In, and the Sea Garden. There&rsquo;s plenty to choose from, and most offer a free view of the breathtaking sunsets.

If you&rsquo;re a morning person, the Coffee Casa, a block up from the boardwalk, offers great coffee and breakfast. It&rsquo;s a great way to start the day.

Actually, just about any day at the seawall is a great day, which is why I envy those who live in the area.

You owe it to yourself to check it out.