Buy Photo
The monument for fallen warriors who fought in Bougainville, Papua New Guinea was located off a small path from the main road. (Matt Orr/Stars and Stripes)

Buy Photo
The monument for fallen warriors who fought in Bougainville, Papua New Guinea was located off a small path from the main road. (Matt Orr/Stars and Stripes) 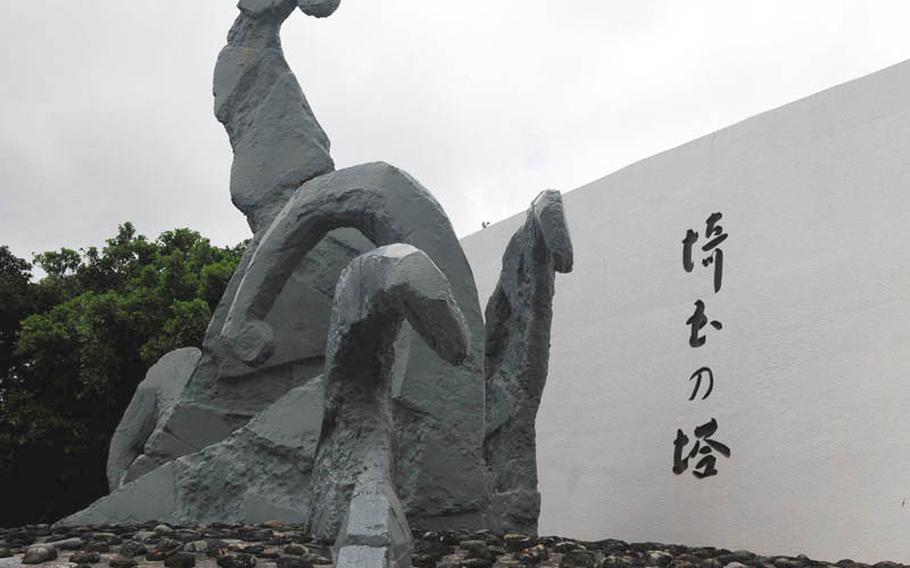 Buy Photo
A memorial for the people who died from Saitama Prefecture in mainland Japan. (Matt Orr/Stars and Stripes) 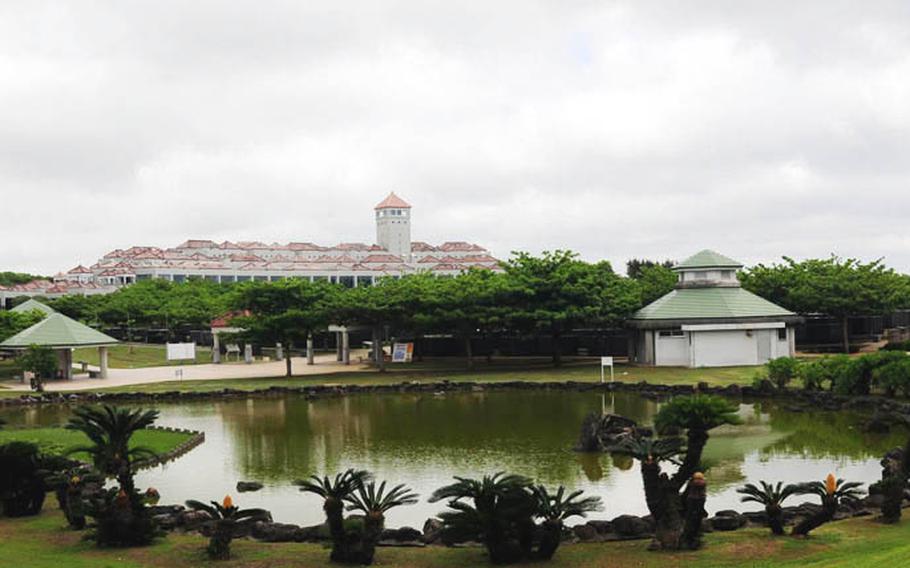 Buy Photo
A large pond is located inside the park where turtles sun bake on rocks in the sun. The Okinawa Prefectural Peace Memorial Museum can be seen in the background. (Matt Orr/Stars and Stripes) 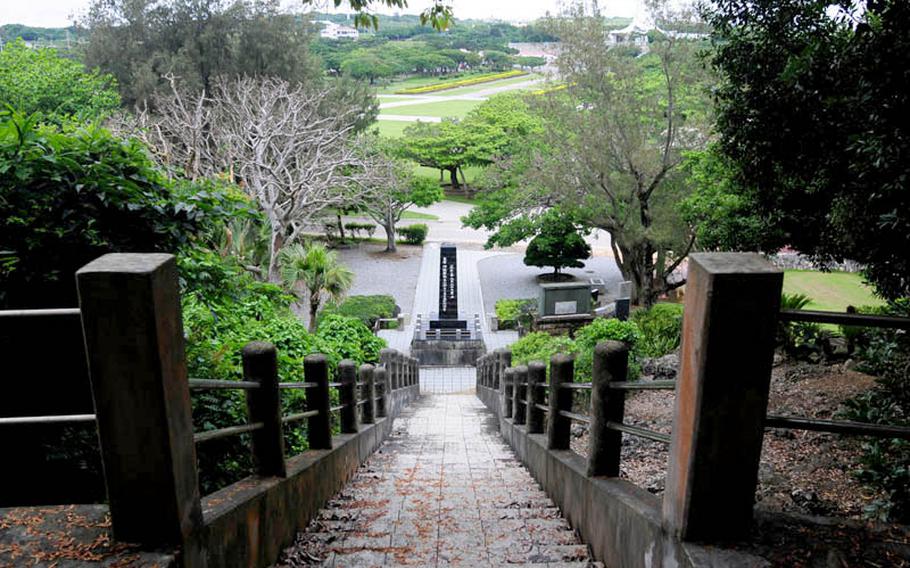 Buy Photo
A boulder inscribed with “Hill of Peace” sits at the base of a monument. In the distance is the Peace Memorial Hall where a large Buddha statue is located. (Matt Orr/Stars and Stripes) 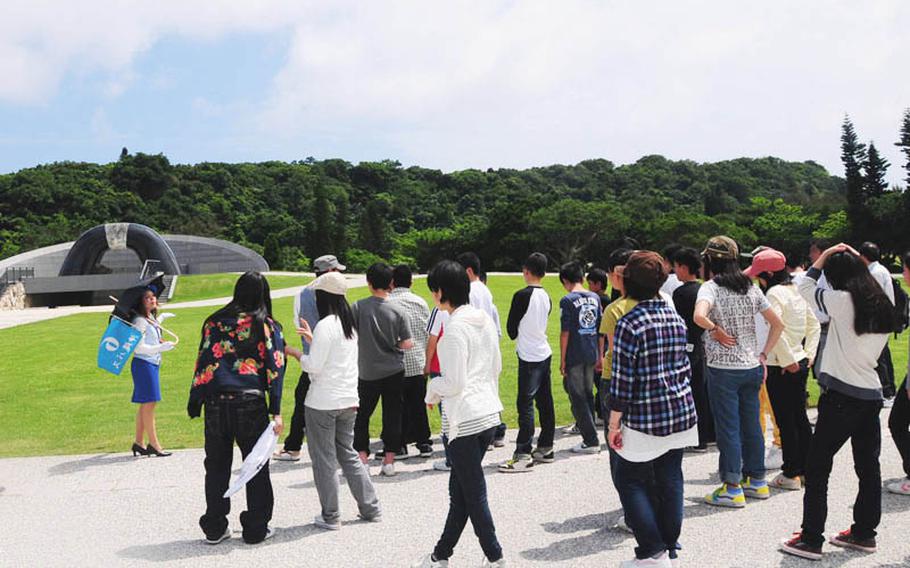 Buy Photo
A group of students listens to a tour guide talk about the Hill of Peace. The large structure is meant to represent a cave where many Okinawans hid during the Battle of Okinawa. (Matt Orr/Stars and Stripes)

Nestled on the southernmost tip of Okinawa is a memorial park that should not be overlooked if you're inclined to go sightseeing.

Peace Prayer Park, a 45-minute drive from Kadena Air Base via the Okinawa Expressway, offers a full day of beautiful views, spectacular memorials and a museum.

The park is located on the site where the Japanese Imperial Army was headquartered during the Battle of Okinawa. Thousands visit the park on June 23 each year to commemorate the official end of the battle, a ferocious 83-day fight against U.S. forces.

But you'll find plenty of tourists there any day of the year walking amongst the picturesque gardens and visiting the Okinawa Prefectural Peace Memorial Museum.

The most visually striking area of the park is the row upon row of 1,200 black granite slabs inscribed with the names of more than 240,000 military and civilians who died during the fierce fighting during the battle.

The granite walls are arranged to form "waves" representing the Everlasting Waves of Peace, and they stretch toward the cliffs where turquoise waves crash a few hundred feet below.

I'd been to Peace Prayer Park on two other occasions. Once was to photograph Japanese Prime Minister Naoto Kan's visit, and once for the annual remembrance ceremony.

On both occasions, I thought I had seen the whole park. I had walked around the large pond and stared at the turtles baking lazily on the rocks protruding from the water, and I walked around the granite memorials.

But recently I discovered more of the park. On the western side, up a short hill, are some spectacular memorials. I consider this to be the best part of the park. Walking there was a serene experience when compared to dealing with the noisy school children on their tours down by the main granite walls. Instead, I was struck by the smell of the pine needles and the sounds of birds singing, insects chirping and waves crashing at the bottom of the cliffs.

It was so quiet and peaceful and there was not a soul to be seen. This is how I figured a memorial should be. I must have walked up and down the paths, taking in the memorials for more than two hours and never heard or saw another person.

There are about 50 memorials representing various prefectures, government agencies, schools, and Imperial Japanese Army soldiers who died during the war. One I liked had a sculpture of towering waves crashing to the ground. Behind the waves are Japanese kanji symbols dedicating it to the soldiers from Saitama prefecture that died during the war.

Another exceptional memorial was a huge, smooth boulder sitting atop jagged rocks resting in the shade of pine trees and surrounded by a sea of perfectly manicured grass. It had a square chiseled out of it with kanji intricately carved into it.

Some memorials just off the roadway towered over me; others were concealed, up short pathways and hidden from view.

There isn't any English translation for the memorials. I had to ask a co-worker to translate the kanji to figure out what each memorial signified.