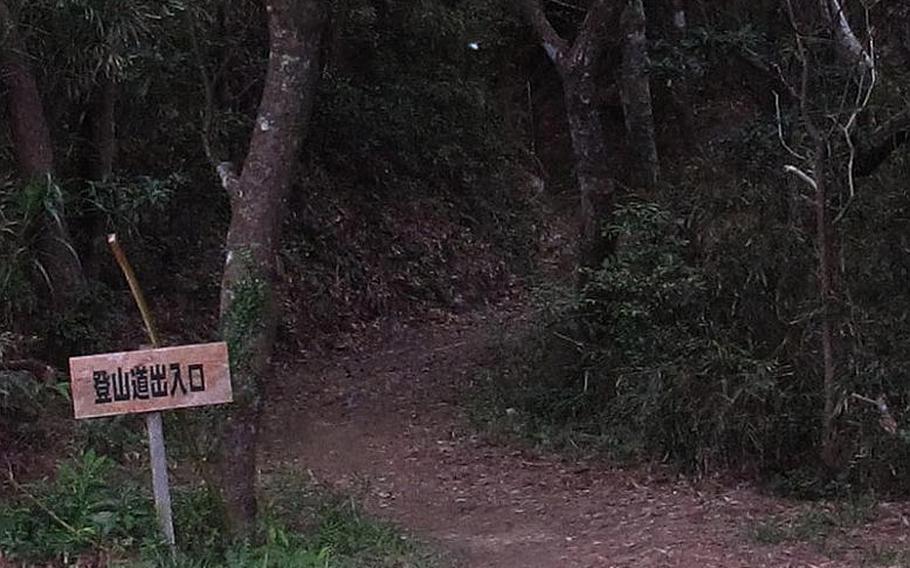 Buy Photo
The beginning of the trailhead is located at the rear of a youth center, which was quite difficult to find. It didn't help that all signs in the area are in Japanese. However once found the hike to the top of Nago Mountain took a bit of an hour to reach. (Matt Orr/Stars and Stripes)

Buy Photo
The beginning of the trailhead is located at the rear of a youth center, which was quite difficult to find. It didn't help that all signs in the area are in Japanese. However once found the hike to the top of Nago Mountain took a bit of an hour to reach. (Matt Orr/Stars and Stripes) 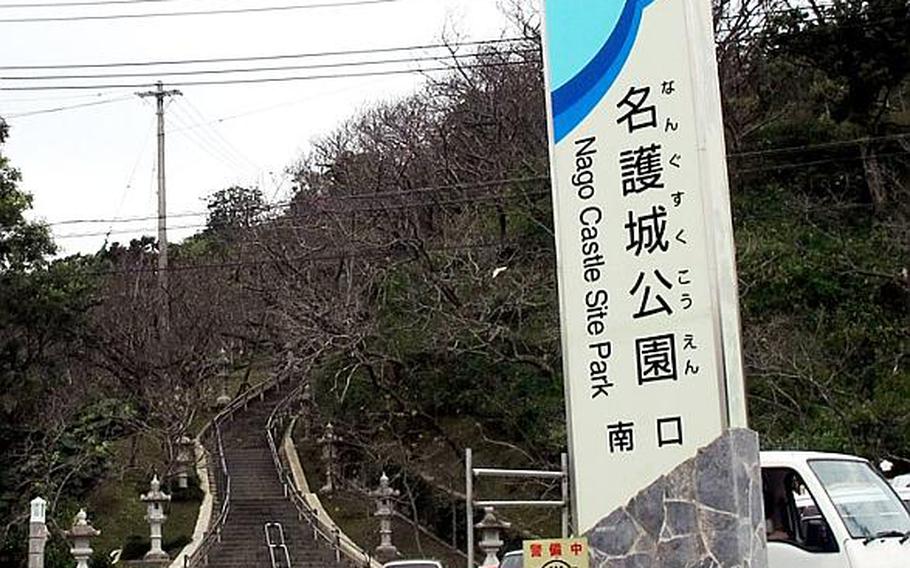 Buy Photo
The parking for Nago Castle Site Park is where the beginning of the hike starts. The actual trail head is quite a way from here though and can be difficult to find. (Matt Orr/Stars and Stripes) Buy Photo
A large torii gate halfway up the staircase frames the city of Nago below. The area is surrounded by cherry blossom trees. This area would be absolutely stunning during cherry blossom season due to the many trees in the area that covered the side of the mountain. (Matt Orr/Stars and Stripes) Buy Photo
A map in the Nago Castle Site Park gives a hint to the beginning of the Nago Mountain trail, however it is all written in Japanese and I ended up walking in a few circles before finally stumbling on the trailhead. (Matt Orr/Stars and Stripes) 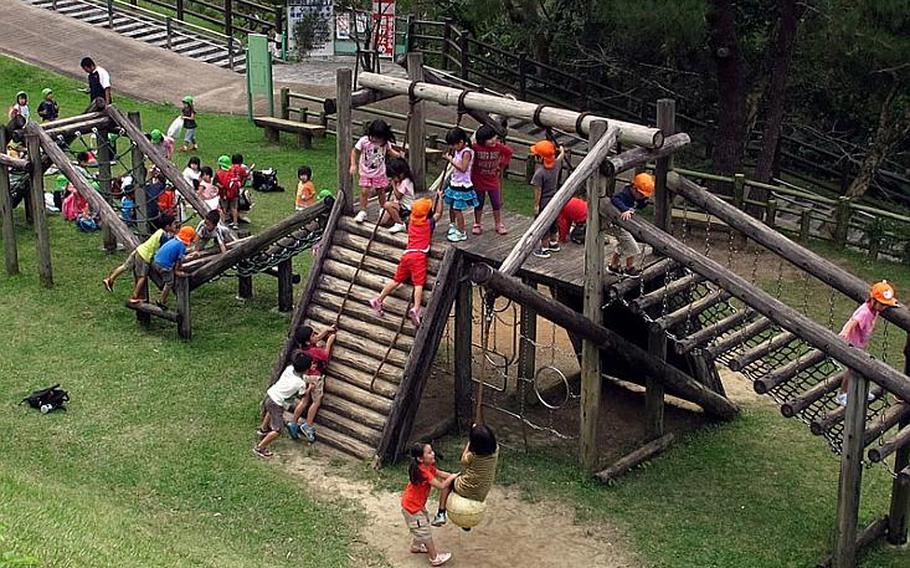 Buy Photo
Children play on a climbing gym in Nago Castle Site Park. The park has one of the best kids play areas I have seen on Okinawa. There are rest room facilities and drink machines as well as picnic tables. (Matt Orr/Stars and Stripes) 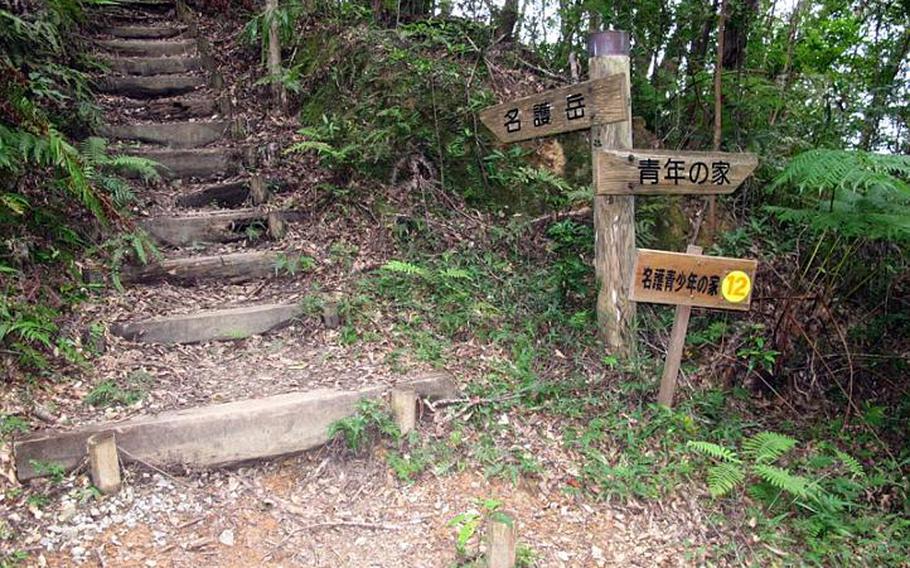 Buy Photo
The hiking trail is well maintained. Much of the trail gas steps made from wooden logs. I assume that the trail is well marked, but had no idea. I kept following the path that led up the mountain. (Matt Orr/Stars and Stripes) 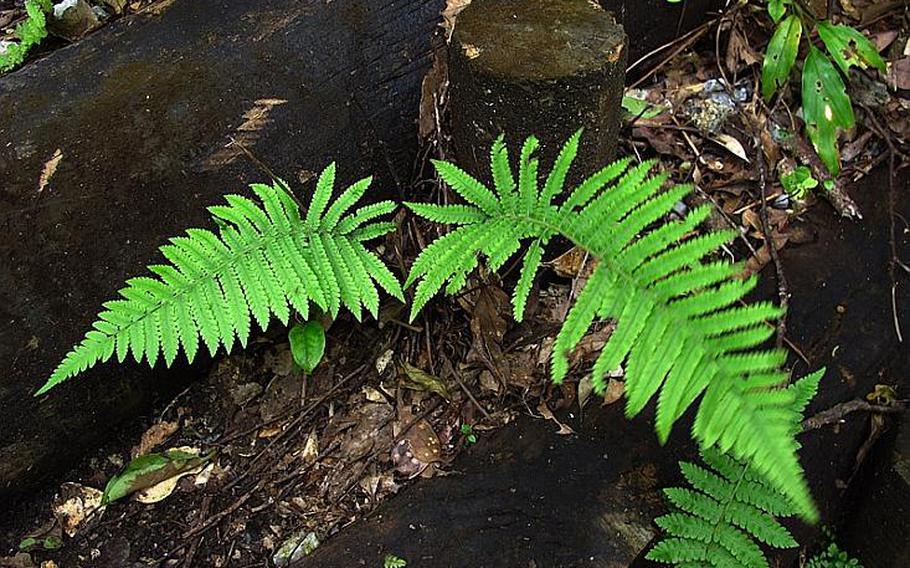 Buy Photo
Ferns were scattered all along the edge of the trail indicative of how wet the trail is. The steps were extremely slippery in places and where there was a steep grade hikers should be extremely cautious to prevent falling and possibly injuring themselves. (Matt Orr/Stars and Stripes) Buy Photo
After just over an hour of hiking, the summit of Nago Mountain appeared with a wooden stake with Japanese writing inscribed on it. The small clearing offered beautiful views in nearly all directions. (Matt Orr/Stars and Stripes) Buy Photo
A small cement stone marks the summit of Nago Mountain. To celebrate reaching the top, I took a photo of myself attempting a handstand. This took a few attempts. (Matt Orr/Stars and Stripes)

I like to think that when I wrap up my current three-year tour in six months, I will have made the most of my opportunity to explore the wonders of Okinawa.

Without a doubt, I will miss the great weather and the spectacular scuba diving and snorkeling. But until recently, I hadn&rsquo;t taken advantage of the hiking trails splattered across the island. I love the outdoors and growing up, a typical family vacation involved camping and hiking.

A Google search produced a few lists with some directions to some hiking trails on the island. It looked like the better ones were in the less-populated areas in the northern part of the island. I was looking for a strenuous hike that I could do on my own, and without getting lost.

So it was with a sense of determination and purpose that I set off on an adventure to hike to the top of Nago Mountain, which according to an online post has &ldquo;beautiful views of Okinawa.&rdquo;

Nago Mountain &mdash; located just to the west of the city of Nago &mdash; offered a hike that should take just under two hours. That&rsquo;s what the online description said anyway.

So in a car that had a full tank of gas and a mind set on finally accomplishing a hike, I pointed the car north and headed up the Okinawa Expressway.

An hour or so later, I finally managed to pull into what I thought was the correct parking lot with a path that would lead to the beginning of the trailhead. But that wasn&rsquo;t the case.

I was close and did end up finding the trail, but not until after wandering many roads and cement trails before finally coming to the beginning of the trail at the back of a campground located at a youth center.

The trail is easy to follow, well-constructed, and for the sections that go up and down, logs have been set into the trail to replicate steps.

Colorful butterflies fluttered across the trail and I even glimpsed a mongoose scurrying off the path ahead of me.

About an hour into the hike, I came to a small clearing. A post with Japanese kanji inscribed on it and a small rectangular cement block indicated I had reached the summit of Nago Mountain.

The view was stunning, so I decided it best to take a photo of myself doing a handstand on top of the summit marker. It made sense to me.

With a sense of accomplishment &mdash; and high winds blustering &mdash; I began my descent.

An hour or so later, I was back in my car and heading south on Highway 58.

It had been a great day, and with National Public Radio playing, I promised myself I would do more hikes before leaving Okinawa.