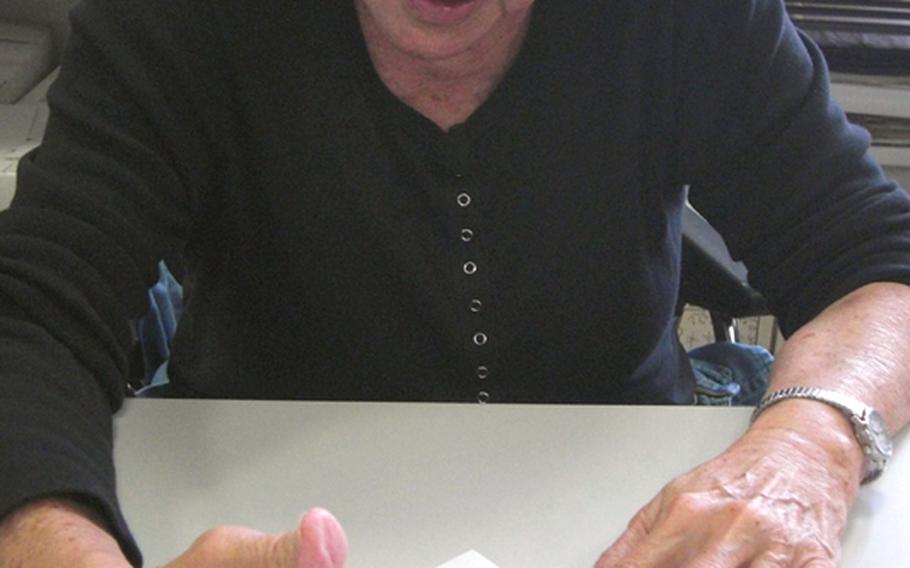 American marine scientist Eugenie Clark explains her new research project during her November visit to the Churaumi Aquarium on Okinawa. Known as the &#39;Shark Lady,&#39; Clark is a world-famous shark expert who, more than a half century ago, succeeded in a first-ever experimental training involving sharks. (Chiyomi Sumida/Stars and Stripes)

In a career that spans more than 60 years, the marine scientist known as &ldquo;Shark Lady&rdquo; is still witnessing firsts.

The 88-year-old Clark was taking time last month between a diving tour in Papua New Guinea and a visit to Japan&rsquo;s mainland to check out Okinawa&rsquo;s world-class aquarium and catch up with fellow shark expert and friend of 30 years, Senzo Uchida, the aquarium&rsquo;s director.

Uchida explained the love of sharks he and Clark share.

&ldquo;It is human nature to be attracted by a huge creature,&rdquo; Uchida said. &ldquo;An aquarium without sharks is like a zoo without elephants.&rdquo;

The founding director of a Florida-based institute Mote Marine Laboratory, Clark is one of the world&rsquo;s authorities on sharks. Her career as a marine scientist began in 1946 when she started working for Scripps Institute of Oceanography in San Diego.

The sphere of her ground-breaking research spans the globe. More than half a century ago, Clark succeeded in the first-ever experimental training involving color visual discrimination testing on lemon sharks. She is currently working on projects concerning the behavior of tropical sand fish and deep sea sharks.

She said sharks are much smarter than they appear and learn just as fast as experimental lab rats.

Clark&rsquo;s studies on sharks may have been based in science, but her achievements would never have been possible without her compassion for the animal. She uses that same passion to dispel common inaccuracies about sharks. For one, they aren&rsquo;t all man-eaters.

Whale sharks, which are the feature attraction at the aquarium, are plankton-feeders and very gentle &ldquo;unless you slap them accidentally,&rdquo; she said, adding not to take advantage of their docile and often friendly nature.

&ldquo;Don&rsquo;t touch or ride them because it is against the law.&rdquo;

Even when sharks attack humans, they are most likely mistaking them for seals, a favorite item on the shark diet, she said.

According to statistics posted on the website of the International Shark Attack File at the Florida Museum of Natural History, as of August 2010, there have been 2,127 confirmed unprovoked shark attacks with 424 fatal cases around the world since 1580.

Clark&rsquo;s visit to the aquarium was a real treat for Uchida.

&ldquo;Now our aquarium received a stamp of approval from the world&rsquo;s top shark authority,&rdquo; said the proud director.

Clark left a note with the aquarium that said, &ldquo;I am greatly impressed with the health and beauty of the live specimens on display and the many rare species of fish. So many firsts are here.&rdquo;