The Bajasseum in Enkenbach-Alsenborn, Germany, is a bit unsettling from the outside, but closer examination reveals some interesting artifacts of the area's history as home to many acrobats, puppeteers and circus performers. (Gregory Broome/Stars and Stripes)

The Bajasseum in Enkenbach-Alsenborn, Germany, is a bit unsettling from the outside, but closer examination reveals some interesting artifacts of the area's history as home to many acrobats, puppeteers and circus performers. (Gregory Broome/Stars and Stripes) 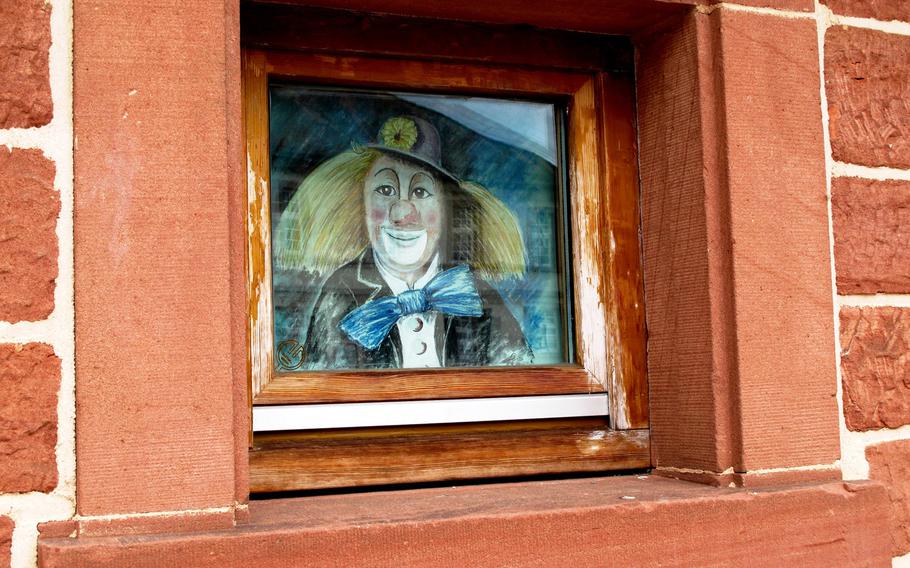 A picture of a smiling clown peers out from a window at Bajasseum in Enkenbach-Alsenborn, Germany. The small museum holds artifacts related to the area's historical circus performers. (Gregory Broome/Stars and Stripes) 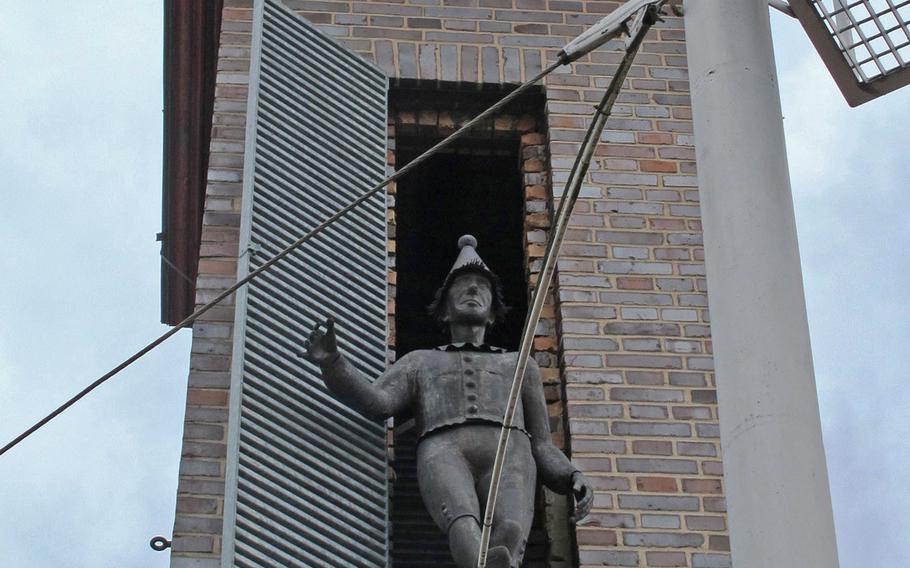 The Bajasseum in Enkenbach-Alsenborn, Germany, is well-known for this statue of a funambulist, or tightrope walker, stepping out of the tower onto a wire. (Gregory Broome/Stars and Stripes) 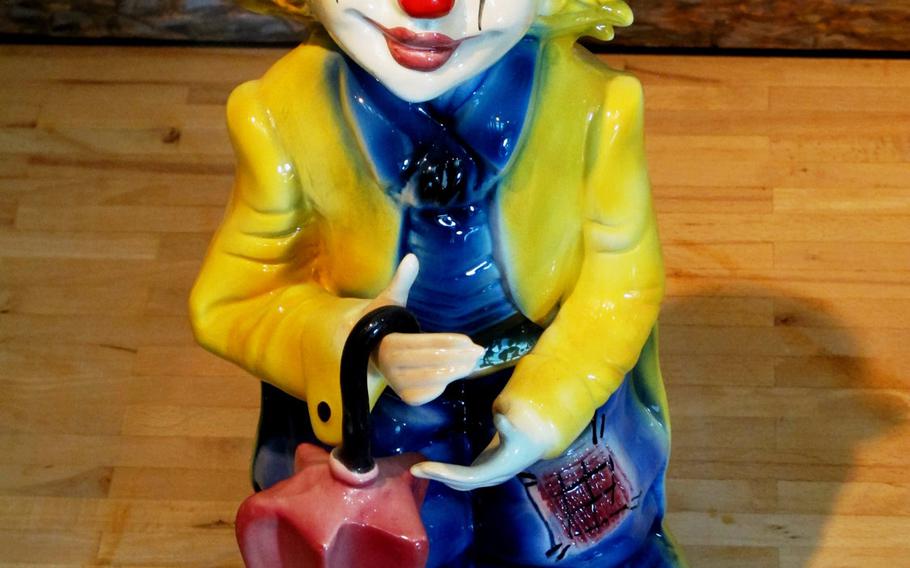 A small figure of a clown is among the artifacts housed in the Bajasseum in Enkenbach-Alsenborn, Germany. The museum commemorates the many circus performers who originated from the town. (Gregory Broome/Stars and Stripes) 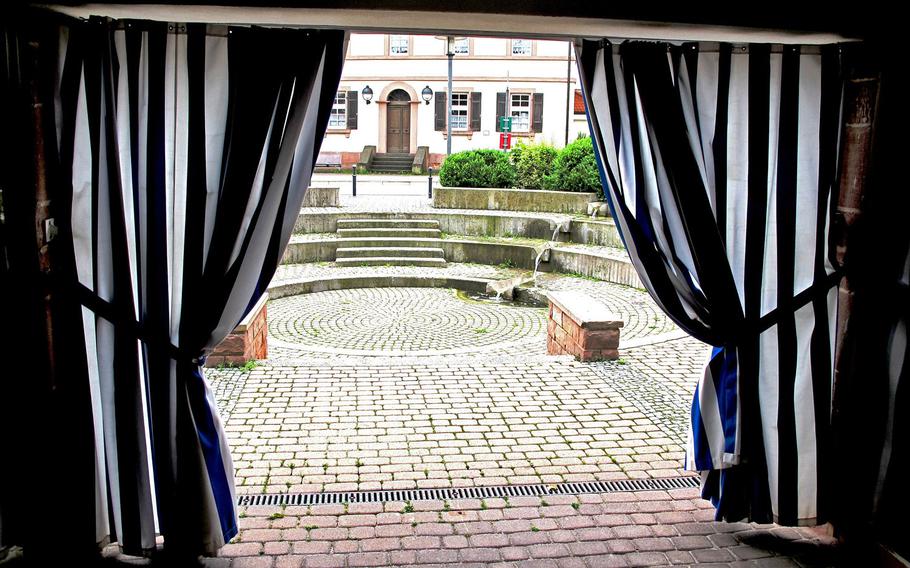 Heavy striped curtains define the entrance to the Bajasseum in Enkenbach-Alsenborn, Germany. The free museum is open from 9 a.m. to 6 p.m. daily and holds items relating to the town's history as home to many circus performers, acrobats and puppeteeers. . (Gregory Broome/Stars and Stripes)

There’s a small brick building just off the main street in the small German village of Enkenbach-Alsenborn with blue and white striped curtains draped on either side of the entrance. From the outside, it looks pretty dark in there, but there’s a smiling clown peering out of a small window. Go ahead, walk on in. Check it out.

A bit apprehensive? There’s no need to be.

The building houses a local tourist attraction, the Bajasseum. The small museum contains a fascinating selection of artifacts from the town’s history as home to various acrobats, puppeteers and circus performers.

As the town’s website describes, a number of local residents pursued such careers as a way to escape the bleak living conditions of the 19th century and the following world wars.

A number of those artists, musicians and performers from Alsenborn became prominent on summer tours. They returned to Alsenborn in the winter, living off the proceeds of their warm-weather tours and honing their crafts for the following year.

The Bajasseum commemorates this unique slice of German history with a humble but respectful monument.

The building is set back off the street behind a small fountain in the shape of an amphitheater. Hanging above the outer plaza is a wire, which on closer inspection reveals itself to be a tightrope strung between two suspended platforms. Follow the wire to the building, and you’ll see a sculpture of a funambulist beginning his walk.

A tour of the inside doesn’t take much longer. The building contains pictures, signage and other specimens related to the unlikely local industry, sorted by era and displayed behind glass. It’s a limited but poignant collection, particularly the melancholy images of the performers, their eyes seeming to reveal both the struggle of their hardscrabble lives and the joy they found in their performances.

Nearby, on a traffic circle entering Alsenborn, you’ll find a statue of Sam the elephant and an English-language retelling of his sad story. The elephant performed with a family circus until the circus folded in 1917. The elephant became a local spectacle as it plowed fields and wandered the farmland and eventually succumbed to hunger during World War I.

A visit to the Bajasseum and the statue of Sam is a quick excursion from the Kaiserslautern Military Community, and the free attractions aren’t substantial enough to fill a day. But a brief tour through the unusual history of Enkenbach-Alsenborn is well worth your time.

From Kaiserslautern, Ramstein or Landstuhl, take Autobahn 6 toward Mannheim and take the exit for Enkenbach-Alsenborn and follow highway 48 into town. Take the first right onto Rosenhofstrasse — the traffic circle here features the statue and story of Sam the elephant. Continue down the street to the Bajasseum at 87 Rosenhofstrasse.

The museum is open to the public from 9 a.m. to 6 p.m. daily. It’s a self-guided walk-through, with no apparent employees on site.

There are a few bakeries and restaurants in Enkenbach-Alsenborn, along with several grocery stores surrounding the traffic circle hosting Sam the elephant.

Further details are available at www.tinyurl.com/gle52z7 (German only).