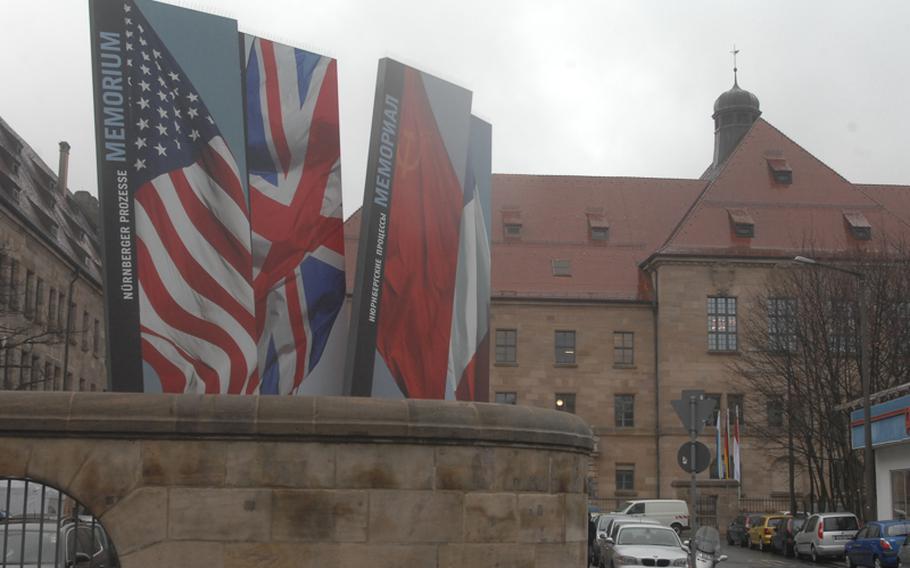 A display for Memorium Nuremberg Trials depicts the flags of the victorious Allied Powers in World War II -- the United States, Britain, the Soviet Union and France -- who tried the captured Nazi leaders for war crimes and crimes against humanity. The building in the background is the Nuremberg Palace of Justice where the suspects were tried. (Seth Robson/Stars and Stripes)

A display for Memorium Nuremberg Trials depicts the flags of the victorious Allied Powers in World War II -- the United States, Britain, the Soviet Union and France -- who tried the captured Nazi leaders for war crimes and crimes against humanity. The building in the background is the Nuremberg Palace of Justice where the suspects were tried. (Seth Robson/Stars and Stripes) 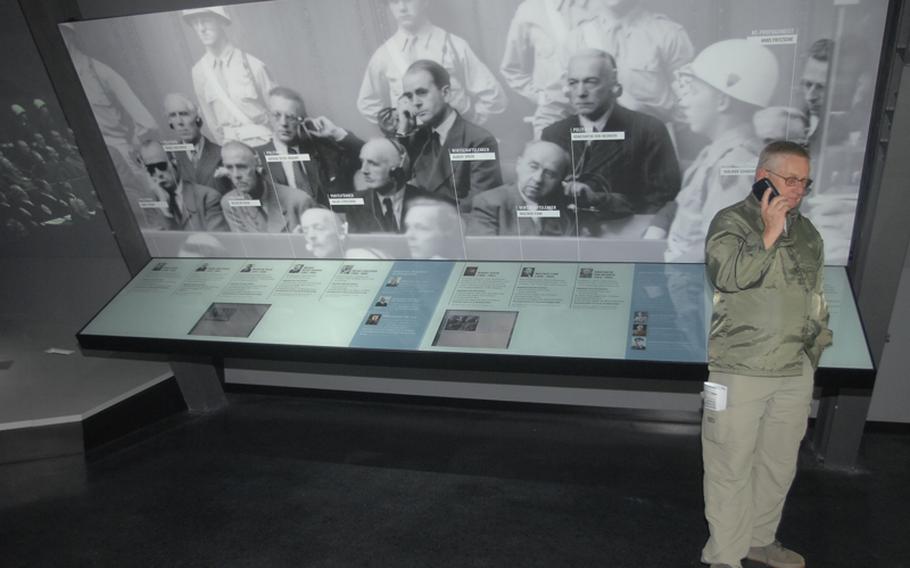 A visitor to Memorium Nuremberg Trials listens to an audio guide in front of a display showing some of the Nazi defendants with their U.S. military guards behind them at the Nuremberg Palace of Justice. (Seth Robson/Stars and Stripes) 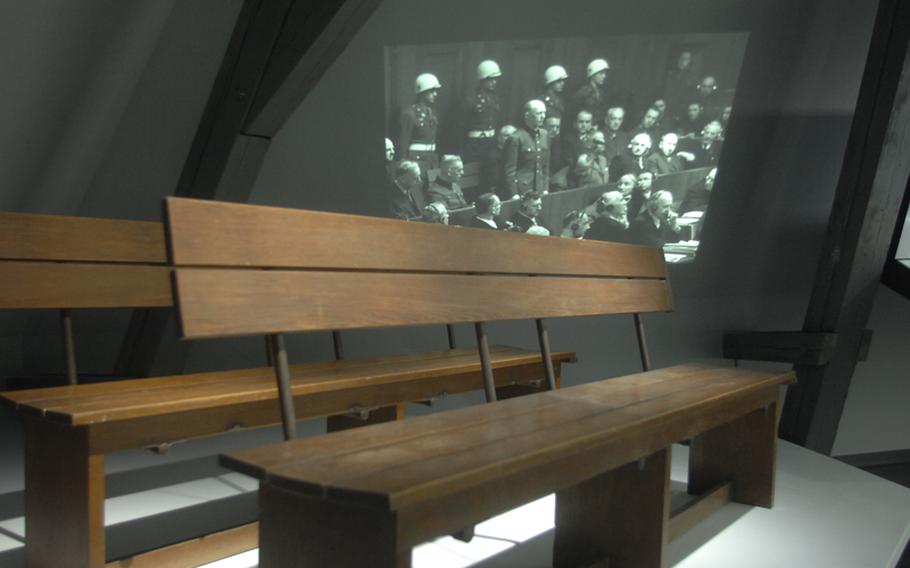 The bench where Nazi leaders sat to face justice at the war crimes trials held in Nuremberg, Germany, after World War II as part of the multimedia exhibit Memorium Nuremberg Trials. (Seth Robson/Stars and Stripes) 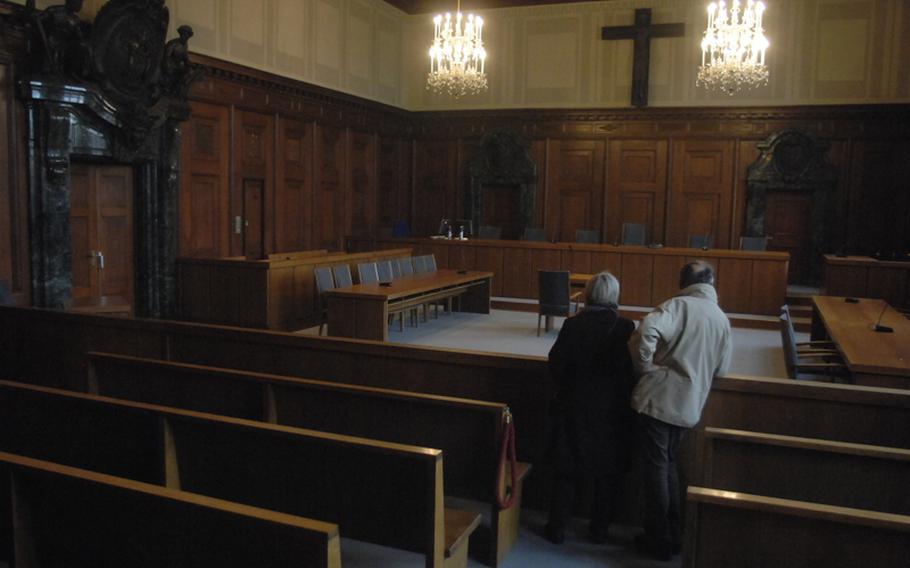 A couple gazes at Court Room 600, the room where the surviving leaders of the Nazi regime were tried for their crimes after World War II. It is in the Nuremberg Palace of Justice and is still used for criminal trials. (Seth Robson/Stars and Stripes) 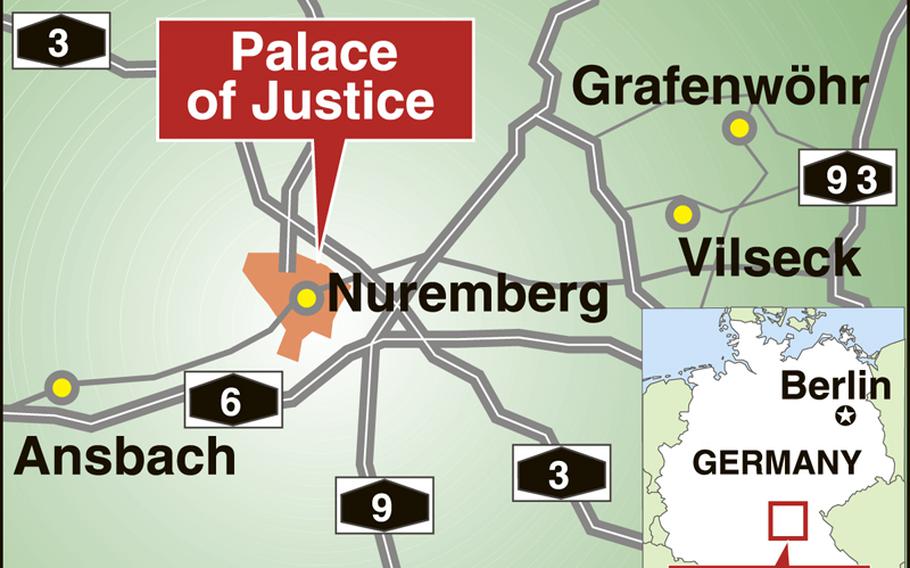 The guilt of the leaders of the Third Reich is the focus of a new permanent exhibit at the courthouse in Nuremberg, Germany, where the Nazis were tried and convicted of waging a war of aggression and committing war crimes and crimes against humanity.

The Memorium Nuremberg Trials exhibit in the Nuremberg Palace of Justice includes hundreds of photographic, film, text and audio displays that tell the story of Nazi war crimes and the fate of the men who masterminded them.

As World War II came to an end, the victorious Allies &mdash; the U.S., Britain, France and the Soviet Union &mdash; agreed to try the Nazi leaders before an International Military Tribunal in Nuremberg, a city chosen partly because it was the site of Nazi propaganda rallies. More than 20 major war criminals, along with criminal organizations such as the Nazi Party, the Gestapo and the SS, went on trial when the court opened its first session in October 1945.

The cell block where the Nazis were held still stands next to the Palace of Justice, but it is inside a prison that today houses ordinary criminals and is off limits to the public. But visitors can sit in Court Room 600 where the trials were held &mdash; although since the room continues to be used for criminal trials, entry cannot be guaranteed.

The top floor of the Palace of Justice houses a multimedia exhibit on the Nuremberg trials. Much of the written text is in German, but free audio guides with explanations in English are available at the front desk.

Among the items is the bench where the Nazis sat to hear the evidence against them provided by more than 280 witnesses, including Holocaust survivors. The exhibit doesn&rsquo;t gloss over the irony of Nazis being judged by officials from the Soviet Union &mdash; a nation that had signed a non-aggression pact with Germany before the war then subjugated Eastern Europe, starved millions and exiled political prisoners to gulags. It details unsuccessful attempts by Soviet prosecutors to pin blame for the Katyn Forest massacre of Polish officers by Soviet troops on the Nazis.

On Sept. 30, 1946, the military judges gave their verdicts &mdash; three acquittals, 12 death sentences, three life sentences and four lengthy prison sentences. A front page newspaper photograph of the Nazis&rsquo; dead bodies lying in their cells after the executions (and in the case of G&ouml;ring, suicide by cyanide the night before he was to be hanged) is part of the exhibit.

There is also information on the follow-up trials at Nuremberg that saw the prosecution of hundreds of lesser Nazis, including doctors who experimented on prisoners, judges, lawyers, industrialists, police, military officers, civil servants and diplomats, between 1946 and 1949. Many of them had death sentences commuted or were released early from prison during the Cold War and the founding of the Federal Republic of Germany.robsons@estripes.osd.mil

DirectionsNuremberg can be reached by Autobahn 73 from the north and south, A6 from the east and west and E51 from the Grafenw&ouml;hr area. The Palace of Justice is at B&auml;renschanzstrasse 72, not far from the N&uuml;rnberg-Westrring exit off A73. Street parking in the area is limited.

TimesThe exihibit is open 10 a.m. to 6 p.m. daily except Tuesday with a final entry at 5 p.m. It is closed Tuesdays and some German holidays.

CostsAdmission is 5 euros for adults and 3 euros for those qualifying for discounts, including youths 18 and younger and students. Discounts are also available for school groups and families. For an extra 2.50 euros, the entrance ticket can be used as a day ticket to visit all other municipal museums free on that day. Groups of 10 or more are asked to make reservations.

FoodFood is not available at the Palace of Justice, but it is a short walk to restaurants and fast-food outlets.

InformationVisit www.memorium-nuernberg.de for more information; click on any tab on the home page and the new page will include a button to turn the page into English. The office&rsquo;s phone number is 0911-32179-372, and its e-mail address is memorium@stadt.nuerenberg.de.