Nothing gruff about this goat-specialty restaurant in Okinawa 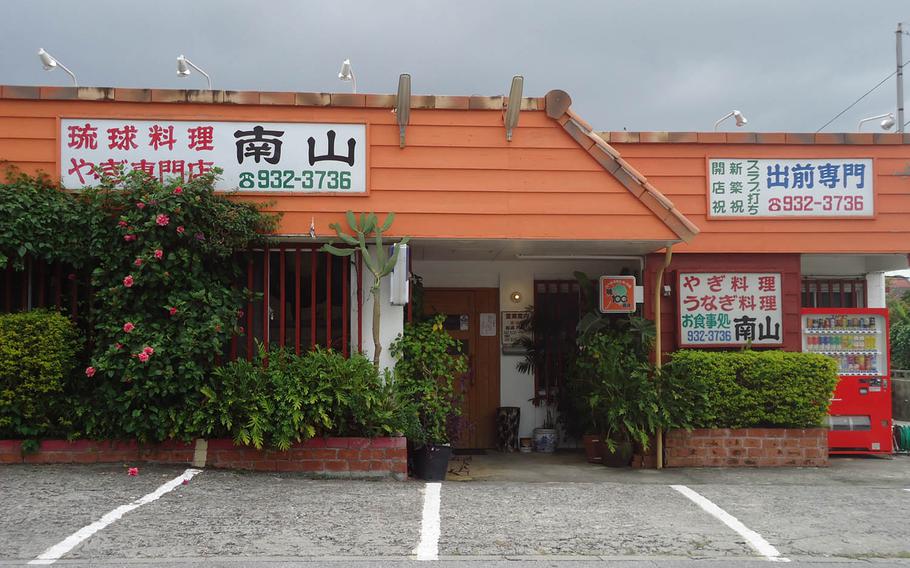 A side of mystique: Nanzan, in Kitanakagusuku on Okinawa, Japan, is a top-100 restaurant that specializes in goat cuisine. The eatery serves affordably priced dishes made from local recipes with fresh, local ingredients in quaint and homey surroundings. (Matthew M. Burke/Stars and Stripes)

A side of mystique: Nanzan, in Kitanakagusuku on Okinawa, Japan, is a top-100 restaurant that specializes in goat cuisine. The eatery serves affordably priced dishes made from local recipes with fresh, local ingredients in quaint and homey surroundings. (Matthew M. Burke/Stars and Stripes) 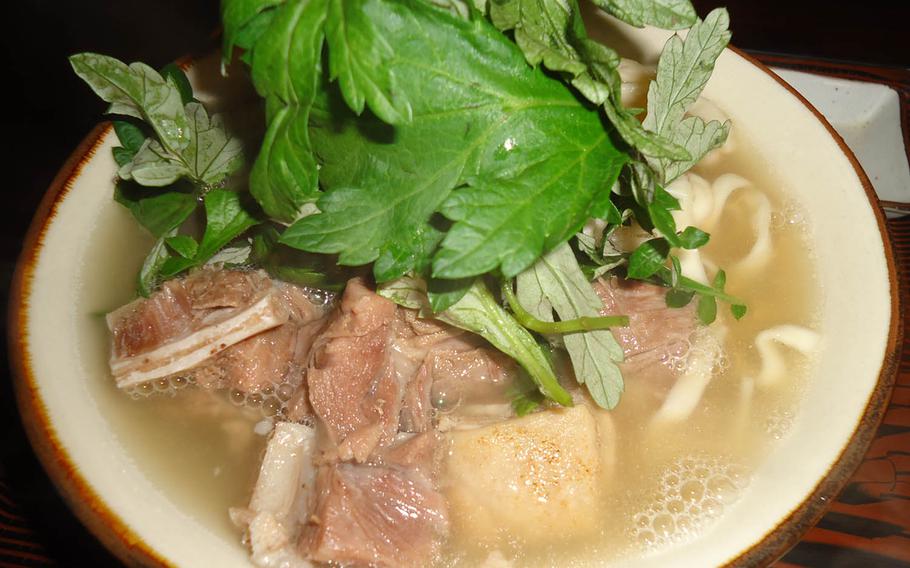 The dish that put Nanzan on the culinary map: goat and wormwood soup. (Matthew M. Burke/Stars and Stripes)

In the Norwegian fairy tale “Three Billy Goats Gruff,” a greedy troll is tricked away from a meal of plump, juicy goat. Poor guy should have just gone to Nanzan.

Nanzan, which according to a sign on its facade was named one of the top 100 restaurants in Kyushu and Okinawa, specializes in goat cuisine.

That might sound a bit adventurous to some, but there’s nothing gruff about it.

Nanzan, just down the street from the new Aeon Mall Rycom in Kitanakagusuku, is quintessential Okinawa. It serves affordably priced dishes made from local recipes with fresh, local ingredients in quaint and homey surroundings.

I recently found myself there with my 9-months-pregnant wife after locals told her eating goat just before labor makes for quicker and easier childbirth. The jury’s still out on that bit of local lore.

Nanzan’s most famous dish is its goat soup, which comes in sets costing 1,200 and 1,600 yen (about $10 and $13), depending on size. The meat was either pressure- or slow-cooked; it melted off the bone. The fresh, juicy and delicious goat was about as gamey as a cut of venison.

The meat was soaked in clean, delicate broth bursting with flavor. The dish’s only drawback: It was served with funky wormwood leaves, the same ingredient used in absinthe. Wormwood leaves certainly are healthful, and I ate them in an attempt to conjure the Green Fairy; however, the slightly bitter plant produced no effects. Overall, however, the experience was a pleasant one.

Other than fish, I usually don’t feel comfortable eating raw meat. But I will try anything once, such as the time I tried horse sashimi in the mainland city of Kumamoto, where it is a renowned delicacy. I will save raw goat for my next visit to Nanzan.

Goat meat mixed with wormwood and soba noodles (900 yen) proved tasty. It was similar to the soup, but with Japanese soba noodles added.

The restaurant also boasts an array of appetizers. For the more adventuresome, there are goat testicles (1,600 yen).

Nanzan has soft drinks and teas for 300 yen, beer starting at 500 yen. New and vintage awamori, an alcoholic beverage indigenous to Okinawa that’s made from long-grain indica rice, ranges in price from 600 yen for a glass to 6,000 yen for a vintage bottle.

Nanzan’s popularity with the locals is proven by the fact that it’s always packed (there’s also a location near Marine Corps Air Station Futenma).

If you want a taste of Okinawa and are no fool, unlike the troll on the bridge, look no further than Nanzan.

Prices: Set meals range from 900 yen to 2,100 yen, though cheaper appetizers and courses are available.