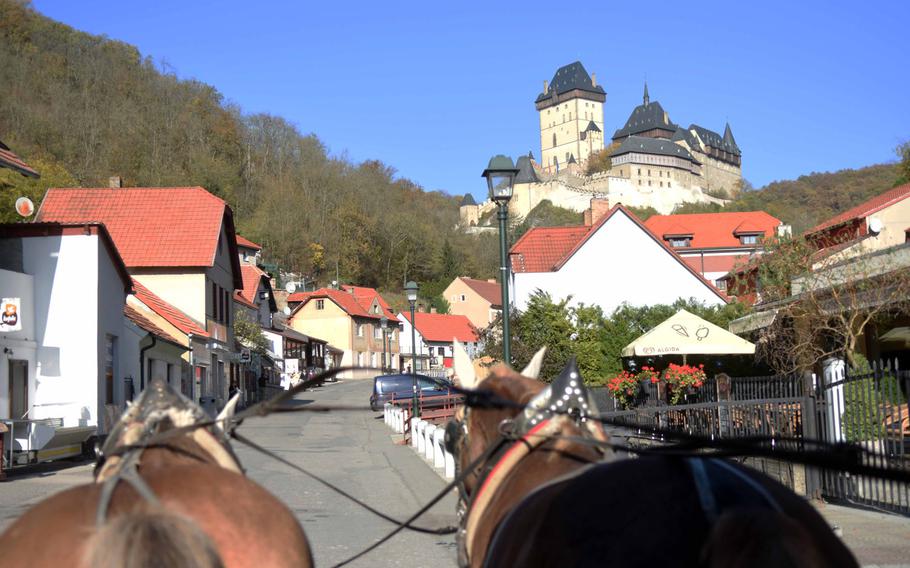 Buy Photo
A horse-drawn carriage makes its way up a hill to reach Karlstejn Castle, the seat of Holy Roman Emperor Charles IV, in the Czech Republic. (Martin Egnash/Stars and Stripes)

Buy Photo
A horse-drawn carriage makes its way up a hill to reach Karlstejn Castle, the seat of Holy Roman Emperor Charles IV, in the Czech Republic. (Martin Egnash/Stars and Stripes) 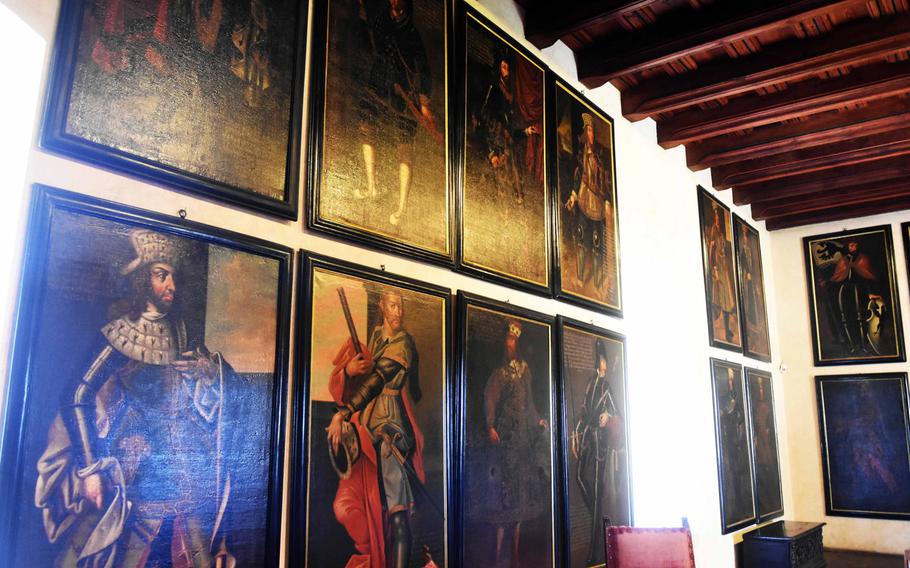 Buy Photo
Large paintings of the ancestors of Holy Roman Emperor Charles IV hang from the walls in the Karlstejn Castle in the Czech Republic. (Martin Egnash/Stars and Stripes) 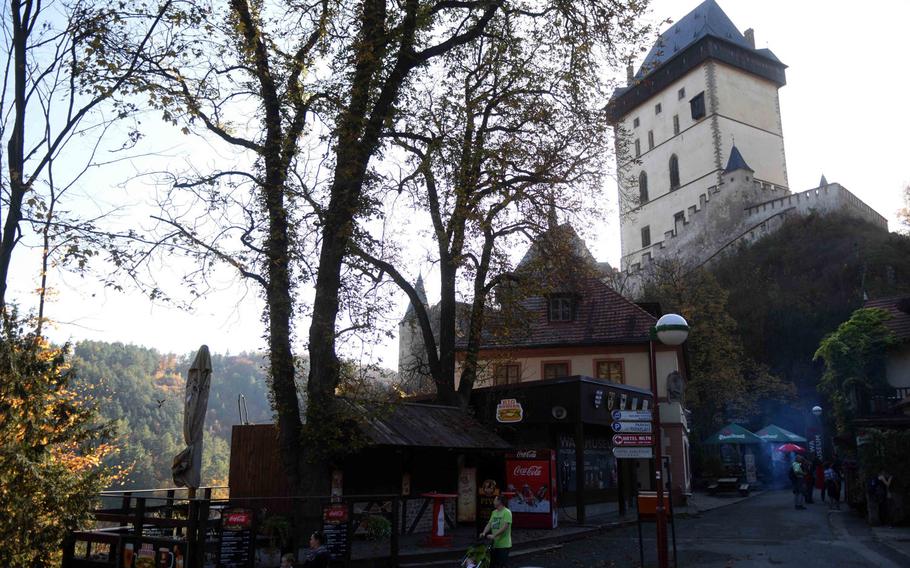 Buy Photo
This is not one of those castles built to look pretty and show off to other monarchs. Karlstejn is a veteran of two wars, and bears the scars. (Martin Egnash/Stars and Stripes) Buy Photo
The winding street of Karlstejn, a castle town in the Czech Republic, is lined with shops and restaurants. (Martin Egnash/Stars and Stripes)

I’ve been let down by castles before. Don’t get me wrong. Some of them are pretty cool. Others just seem like really big houses or hotels without the amenities. But in the Czech Republic, two hours from the Grafenwoehr Training Area in Germany, is a castle that doesn’t disappoint.

Perched high in the hills 19 miles south of Prague rests the architectural gem of Holy Roman Emperor Charles IV, Karlstejn Castle. This is not one of those castles built to look pretty and show off to other monarchs (I’m looking at you, Neuschwanstein). Karlstejn is a veteran of two wars, besieged in 1422 by the Hussites, forerunners to the Protestants, and again by the Swedes during the Thirty Years’ War. Its high walls bear the marks of its enemies, and its tall fortified towers loom over the hamlet of the same name.

The town of Karlstejn is a destination in its own right. It’s mainly a single street, winding almost a mile up and around the hill leading to the castle. On both sides of the street there are shops selling souvenirs and antiques, along with a wide variety of restaurants.

But the best part is that the town isn’t one of those fake quaint villages, pretending to be stuck in the 18th century. You can get good cheeseburgers there and even take-out cocktails for the hike up the hill. And trdelniks, the traditional Czech grilled, spirally pastry, aren’t just served in the traditional cinnamon way that you find in most other places in the Czech Republic. You can get them dipped in chocolate and rolled in M&Ms.

At the town’s base is the river Berounka, where hiking trails lead you a few miles away to deep gorges that provide amazing views.

From the river, you can walk up the winding hill, stopping at shops along the way, and enjoy the smell of wood stoves all around. Or, since this is an imperial castle town, you can get the royal treatment by taking a horse-drawn carriage and look down at all the peasants huffing and puffing their way up the hill. And what’s the point of being imperial if you can’t look down at peasants?

You’ll be able to spot the castle almost the entire climb. It’s interesting to see the various battlements facing each side. The most impressive is the 200-foot, aptly named Big Tower, which once housed the imperial regalia and Bohemian crown jewels. It features elaborately carved, painted wooden details you can make out as you get closer.

At the tower, after passing through the stone barbican, you’re free to walk along the walls, which offer fantastic views of the town and the Czech countryside. If you enjoy history, you can imagine the Hussite forces surrounding the castle on all sides, catapulting dozens of dead bodies over the walls to cause infection among the imperial soldiers. Or just enjoy the landscape over a coffee or limoncello spritz.

To go deeper inside the castle, you need to pay for a guided tour. The basic tour takes you through several of the battlements, the great hall and the imperial throne room. In the throne room, the emperor would sit with his back to the windows so foreign dignitaries couldn’t see his facial expressions as he spoke to them.

Karlstejn is two hours east of Grafenwoehr. Take the A6, which turns into the E50, almost the entire way until you get off on Route 116, where you drive along a zig-zagging mountainous road with amazing views.

There is a small cafe in the courtyard; outside the castle you’ll find dozens of larger restaurants and street food.