Nintendo’s next-generation plans are in motion 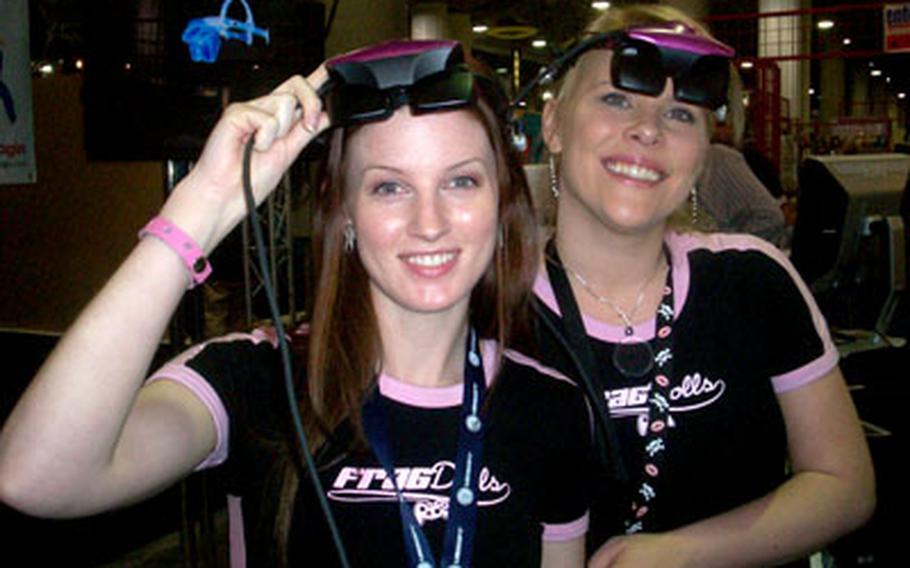 The FragDolls — pro gamers who go by the tags Jinx, left, and Valkyrie — put the eMagin 3DVisor to the test at the Electronic Entertainment Expo in Los Angeles. (Brian Bowers / S&S)

The FragDolls — pro gamers who go by the tags Jinx, left, and Valkyrie — put the eMagin 3DVisor to the test at the Electronic Entertainment Expo in Los Angeles. (Brian Bowers / S&S) 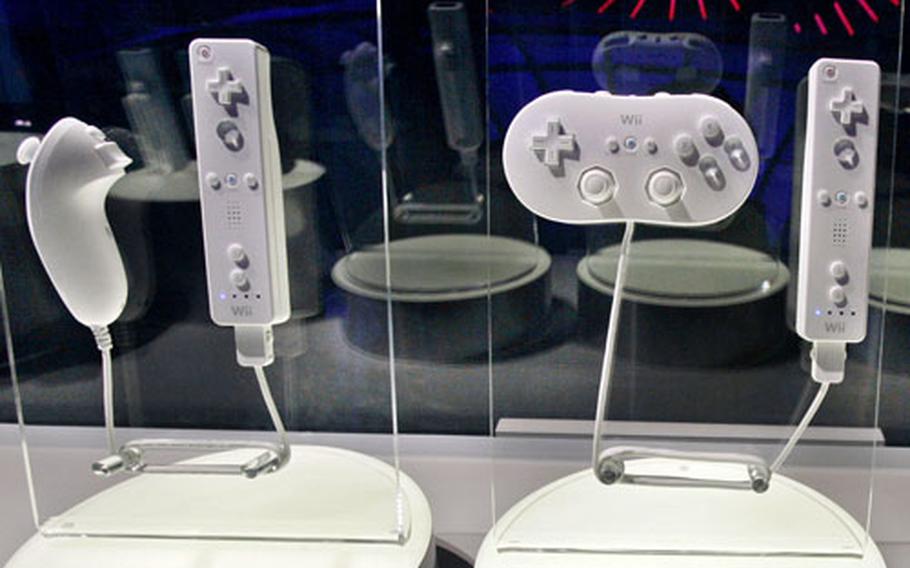 The Nintendo Wii controller comes in multiple flavors, including the nunchuk style, left, and the classic style, right. (AP)

I also had the impression that Sony was playing catch-up and Microsoft was far behind in the controller battle.

Console craziness gripped the gamers, developers and assorted geeks at the Electronic Entertainment Expo in Los Angeles earlier this month.

Everyone was eager to test Sony&#8217;s PlayStation 3 and Nintendo&#8217;s Wii, both of which are scheduled to be released in November. They follow Microsoft&#8217;s Xbox 360, which has been on the market in sometimes-limited quantities for months.

Lines were about an hour long for those who wanted to test PS3, but snaked for hours for Wii &#8212; pronounced &#8220;we.&#8221; The lines for Xbox 360 were predictably shorter. The difference in line length was a good indicator of the level of anticipation for the three systems.

All three consoles boast major leaps forward in processing power, as well as online connections, hard drives and other bells and whistles that send techies&#8217; heads spinning. These new elements permit greater flexibility, improved graphics and more accurate controls. All of this made for some truly spectacular demonstrations at E3. Each of the systems looks great and plays crisply.

For the most part, the gaming needs of the individual player would determine which system to buy if it weren&#8217;t for one thing &#8212; Wii&#8217;s incredible new controller.

The basic wand looks like an overly simplified TV remote. For some games, you can add a joystick-equipped attachment &#8212; connected to the primary wand by a short cord, nunchuck-style &#8212; or a GameCube-like controller needed for older games.

It all looks ridiculously simple when compared to the PS3 and Xbox 360 controllers, which sport numerous joysticks, knobs and buttons. I have to admit that I was skeptical. The thing just seemed too simple to meet the needs of a hard-core gamer.

However, the key to success is Wii&#8217;s motion-sensitivity. As you wave or jerk the wand, it senses the motion and speed and translates them into on-screen action.

For example, in the tennis game in &#8220;Wii Sports,&#8221; you simply flick the controller upward to &#8220;toss&#8221; the ball up and then wave the controller to serve it. The direction the ball heads is determined by the timing of your swing. You can also add some topspin with the right wrist action. It&#8217;s all pretty intuitive.

That might sound exciting for sports fans who want to hit a tennis ball or baseball, but those who prefer shooters and adventure games will discover they haven&#8217;t been forgotten.

Using the controller like a pointer, you can look around or aim. Then, a push of the button releases a spray of slugs or a slashing motion sends a sword slicing through an opponent.

The attachment in the nunchuck setup is also motion-sensitive, which allows it to be put to use, for example, as a shield in medieval combat.

Of course, this can translate into a lot of activity, and some players got quite animated when testing the equipment at E3.

Nintendo wasn&#8217;t the only company offering a motion-sensitive controller. PS3 will have one, too, but Sony offered testing of only one game that took advantage of the technology &#8212; giving the distinct impression that it&#8217;s trailing Nintendo. The game itself &#8212; an aviation game titled &#8220;Warhawk&#8221; &#8212; was fun and looked good but was fairly basic in its gameplay compared to Nintendo&#8217;s offerings.

Both of the companies are pretty tight-lipped about which games will actually be available at launch later this year. And some of the games that are being developed for Wii will cross to other platforms, so it&#8217;s hard to say where and how the motion-sensitivity issue will play out.

However, it seems pretty certain that Wii is best prepared to take advantage of the new technology.

For many gamers, this might tip the scales toward Wii. However, beware &#8212; if you are a time-tested couch potato, you might want to start working out now.

The sights of E3:

The growth of online gaming shows no signs of slowing down.

Developers at the recent Electronic Entertainment Expo in Los Angeles are churning out team-based shooters for the next-generation consoles, as well as massive-multiplayer games for home computers.

A few examples of excellent titles for consoles were:

&#8220;Splinter Cell: Double Agent,&#8221; featuring tough choices and shady missions for an ace spy.&#8220;Brothers in Arms Hell&#8217;s Highway,&#8221; which re-creates the 101st Airborne Division&#8217;s efforts during World War II&#8217;s Operation Market Garden.&#8220;Rainbow Six: Las Vegas,&#8221; which sends the special ops team against terrorists in Sin City.&#8220;Battlefield 2124,&#8221; which takes the firefight into the future.Each of these games benefits greatly from the increased graphics potential of next-generation consoles. All should appear at the end of this year or early 2007.

Gamers who prefer to jump into the electronic skins of fantasy characters in massive- multiplayer games should check out the upcoming version of &#8220;Guild Wars&#8221; and the &#8220;Lord of the Rings: Shadows of Angmar,&#8221; while sci-fi fans might want to wait for the space-based &#8220;Tabula Rasa.&#8221;

Other notes from E3: