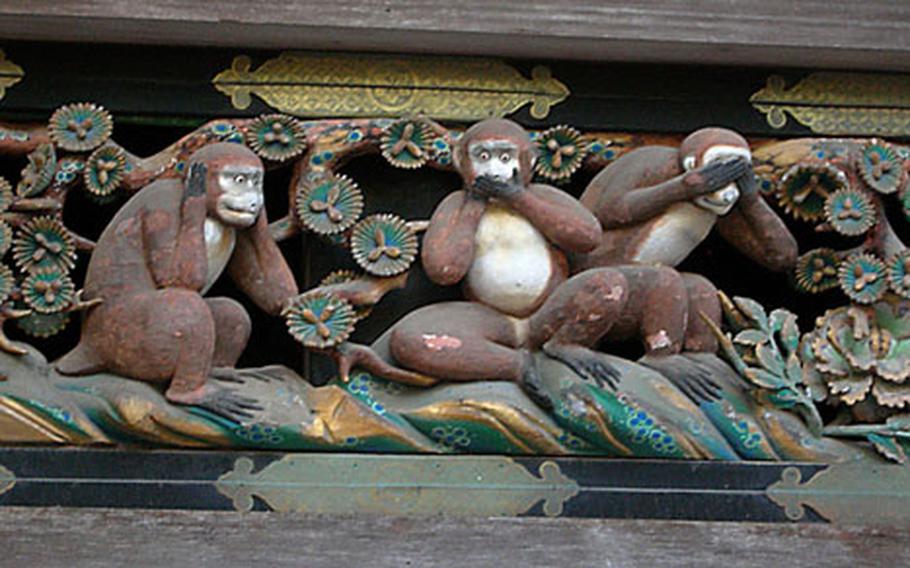 See more photos of the Toshogu temples in this . (Christopher Stoltz / S&S)

If you&rsquo;re familiar with the phrase &ldquo;see no evil, hear no evil, speak no evil,&rdquo; you have the Japanese city of Nikko to thank.

The 17th-century phrase was immortalized in a carving at the Nikko Toshogu shrine. I first heard it in a Saturday morning cartoon acted out by monkeys, but the message about turning a blind eye to violence is the same.

I was asked to go to Nikko by my girlfriend. My girlfriend is a hockey player. Nikko is a hockey town, home of the Ice Bucks. I agreed to go under the impression that I would be sightseeing only.

I was informed en route that there would be not one but two hockey games at the end of the night.

First, though, I was put to the test walking around in the chilly air of Nikko, visiting the centrally-located temples and shrines. The tourists in Nikko could rival the tourists in Roppongi on a Saturday. I heard American, British and Australian accents, as well as Asian dialects from China, Korea and the Philippines. People from all over the world check out these temples that are older than their homelands.

The earliest structures date to 767 A.D., but they&rsquo;ve held up well. Since they were built for samurais, everything is hand-carved, from details in the molding to the larger-than-life statues of demons and warriors.

I was fortunate enough to go into all the surrounding temples, and the coolest thing is on the inside of the buildings &mdash; the ceilings are decorated with large dragons that would make Michelangelo jealous. And as an extra bonus, you can pick up traditional sake on your way out of the temples.

Our next activity: riding a speedboat on Lake Chuzenji. I lived in Syracuse, N.Y., for a year and have not missed the brutal winters, so the boat ride brought un-warm fuzzy memories. The tour guide told me Chuzenji is the widest and deepest lake in Tokyo. It was scenic and calming &mdash; until the cold air froze me into an Eskimo. After the speedboat ride I was allowed to thaw at an udon noodle shop. I must say, the curry udon hit the spot.

My girlfriend described the falls as the &ldquo;Japanese Niagara Falls,&rdquo; and the description is close but to a much smaller scale.

The falls are dotted with ice cream shops, gift shops and pottery stores.

After dinner I watched my girlfriend play hockey for three hours in two back-to-back games. The day was tiring but well worth the trip.