Nicholas Eslinger ‘It was complete adrenaline and focus’ 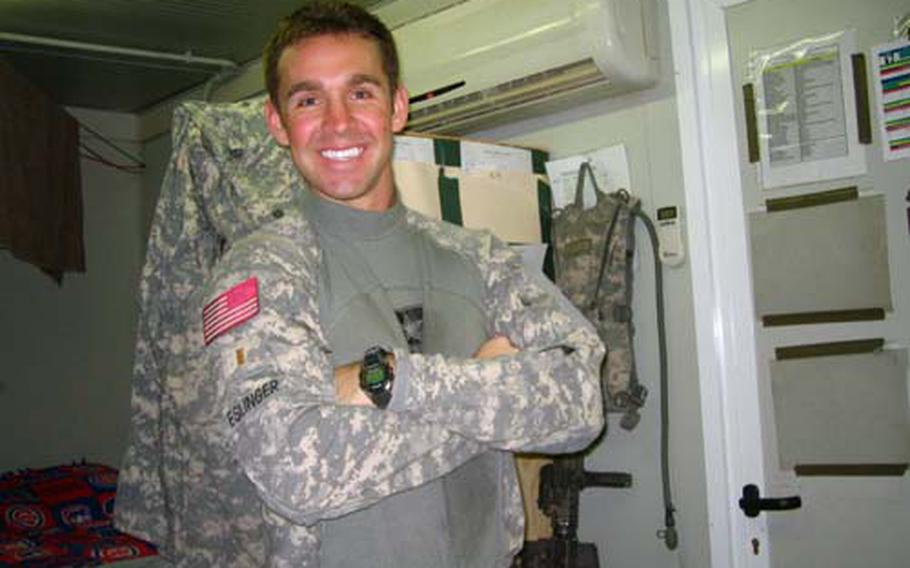 Second Lt. Nicholas Eslinger was awarded the Silver Star for his actions in Iraq. ()

It wasn&#8217;t until he got back from patrol that 2nd Lt. Nicholas Eslinger realized how close he came to death.

On Oct. 1, Eslinger, 25, was leading a dismounted patrol through Samarra to gather intelligence on recent attacks.

When an insurgent tossed a grenade at them, Eslinger dove on it to protect his troops.

"I knew in my mind for a fact that if I did that, there wouldn&#8217;t be enough time, because it was so close to my SAW gunner and my RTO [radio operator], that regardless of how fast they were or how long that grenade fuse lasted, it would still at least wound them &#8212; I couldn&#8217;t have that," he said.

That night, the patrol was waiting outside a home as the unit&#8217;s interpreter asked for permission to enter.

Eslinger, now a first lieutenant, wasn&#8217;t using his night-vision goggles at the time because he could see better with the ambient light.

"As I was pulling security, I saw out of the corner of my eye in the back left corner of the open lot a hand come over the wall with some sort of a projectile," he said.

Based on recent attacks, Eslinger knew it was a grenade.

"The grenade landed, I&#8217;d say six to eight feet to my right front," Eslinger said. "I was on a knee at the time, and it landed and started to roll into the middle of our formation towards the far wall where our soldiers were positioned."

Eslinger has thought about that moment several times and he remembers his only thought was that if he didn&#8217;t do anything, the grenade was going to hit his troops.

By the time the grenade hit the ground, Eslinger was already moving.

"As it hit and continued to roll, I dove right on my right side, and the grenade rolled into me kind of simultaneously as I landed. It was pinned in between, kind of, my right torso and the ground," he said.

Once he was on top of the grenade, he braced for it to go off.

"There was no preparation," he said. "It was complete adrenaline and focus on covering that thing so that if it went off, it wasn&#8217;t going to hit my RTO or my medic or my SAW gunner that was right around me."

"My right hand was already off my weapon, reaching for the grenade," he said. "I quickly grabbed it and from kind of just laying on my side there kind of just did a side throw towards the wall it came from."

Eslinger had just enough time to get the grenade out of his hand and yell "grenade!"

No one was hurt.

U.S. troops began investigating, and within 12 hours, the man who allegedly threw the grenade was arrested at work.

Eslinger, of the 327th Infantry Regiment, 1st Brigade Combat Team, 101st Airborne Division, was awarded the Silver Star for his actions that night.

While he was grateful for the award, Eslinger also felt it was too much recognition.

"I think honestly that any leader in that situation would have done the same thing, I would like to think that, and I think that I was just doing what my company commander and my soldiers would expect of me as a platoon leader."