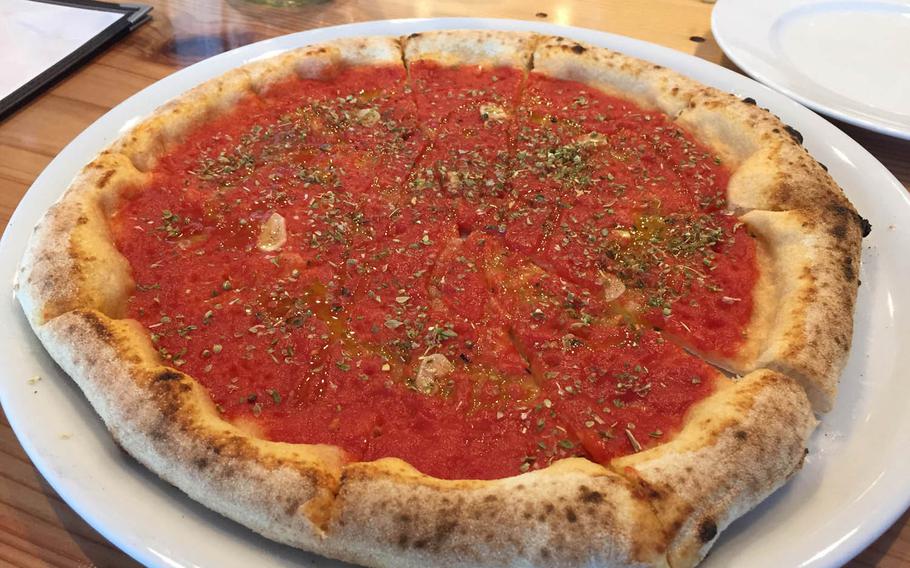 The menu at Napoli Pizzeria near Yokosuka Naval Base, Japan, consists of marinara, grilled vegetable, margherita and a few other options. Most of the pizzas do not come with cheese. (Tyler Hlavac/Stars and Stripes)

The menu at Napoli Pizzeria near Yokosuka Naval Base, Japan, consists of marinara, grilled vegetable, margherita and a few other options. Most of the pizzas do not come with cheese. (Tyler Hlavac/Stars and Stripes) 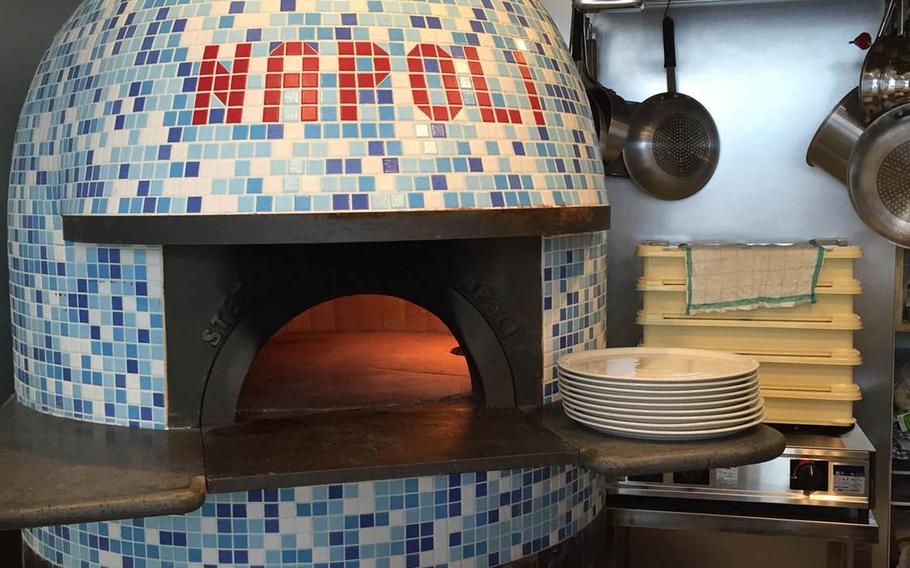 Each pizza at Napoli Pizzeria is made fresh and cooked in the restaurant's custom oven. (Tyler Hlavac/Stars and Stripes) As a servicemember stationed at Yokosuka Naval Base in Japan, my pizza options are generally limited to mediocre chains or rolling the dice and visiting a Japanese pizzeria where mayonnaise and seafood are common ingredients.

Desiring more tasty and familiar fare, I was eager to try Yokosuka’s Napoli Pizzeria, which offers a more “traditional” style pizza, according to its advertisements.

To my surprise, I found the establishment to be rather small and basic. Seating is limited to four chairs squeezed together at the bar and two small tables, and the staff consists of a single cook and waitress. The menu is equally small, listing only a few items.

After some hesitation, I sat down and looked for something to order. After a few moments, I realized the sparse menu and setting are kind of the point here. Napoli’s goal is to make tasty pizza and nothing more. It’s not a place to have a social gathering or to try the newest and latest dining trend.

The cook, an Italian immigrant who opened Napoli’s in July, said he purposely limits the pizza options to marinara, grilled vegetable, margherita and a few other options to keep things authentic as possible. The only non-pizza item on the menu, other than dessert, is a side salad available with the lunch set.

The pizza itself is made fresh right in front of you. Diners can watch the cook assemble the pizza and place it into the custom oven — an entertaining experience in itself.

My marinara pizza appeared to be about 9 inches in diameter with a thin crust. It had no cheese, which is the case with most of Napoli’s pizzas. This surprised me, but I later discovered this is how pizza is traditionally served. My pizza was hot, fresh and served with a liberal dose of olive oil. The tomato sauce was very tangy. Overall, each slice had a light and delicious flavor.

I scanned the dessert menu, which was limited to gelato and tiramisu costing 700 yen each. I ordered the gelato and found it to be delicious, but small and overpriced, which put a slight damper on the experience.

Napoli Pizzeria is for the diner who simply wants to enjoy a tasty meal with minimal effort. There simply isn’t room to have a large social gathering there, and the menu is limited enough that I wouldn’t recommend frequent visits. With that said, if you are craving authentic pizza and don’t mind missing out on the frills of a larger restaurant, this is the place for you.

Address: 1-1 Honchou, Yokosuka. Leaving Yokosuka Naval Base’s Womble Gate, turn right and then left at the Shell station. Napoli Pizzeria is directly across the street next to Lucky Currency Exchange.

Menu: Pizza and salad, dessert offerings are gelato and tiramisu. There is a small wine and beer menu. Menu is available in both Japanese and English. Both the owner and staff speak English and Japanese.

Prices: 1,100 yen for a lunch set, which includes an approximately nine-inch pizza, small salad and a drink. Desserts cost 700 yen.