A Nakamura House guest room and an altar room open out to a small courtyard. The open floor plan allows for a breeze to blow throughout the house, keeping it cooler during the hot days of summer on Okinawa. (Matt Orr/Stars and Stripes)

A Nakamura House guest room and an altar room open out to a small courtyard. The open floor plan allows for a breeze to blow throughout the house, keeping it cooler during the hot days of summer on Okinawa. (Matt Orr/Stars and Stripes) The Nakamura House kitchen has a very small adjoining area where upright stones were placed near the hearth so that prayers to the fire god could be recited. (Matt Orr/Stars and Stripes) 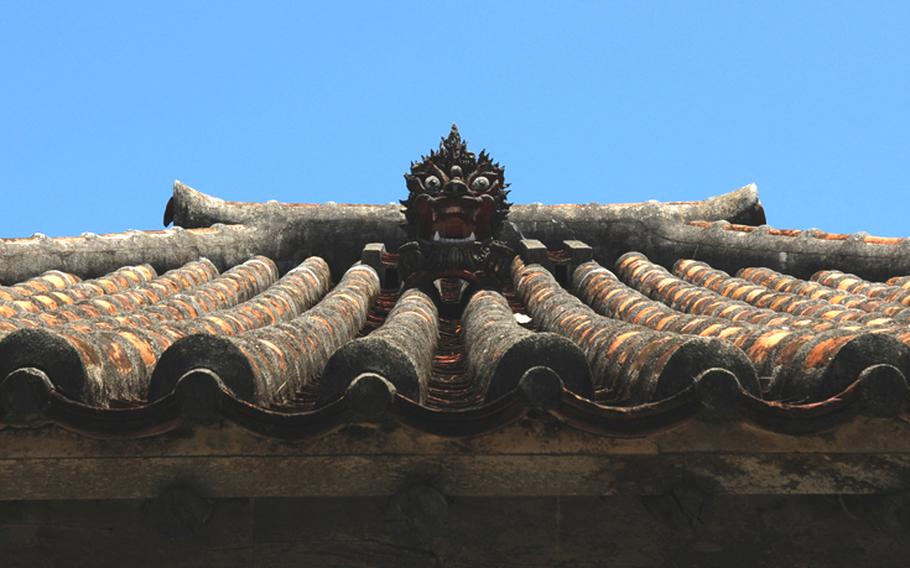 The main building at Nakamura House has a shi-sa, or lion dog, perched in the center of the roof, atop traditional Okinawan red tiles. The shi-sa is said to drive away unwelcome spirits. (Matt Orr/Stars and Stripes) Two pairs of very old footwear can be found in the storage building at Nakamura House. Rusted and utilizing modern nylon rope, there were no signs to indicate how old they were or in what time period they would have been used. (Matt Orr/Stars and Stripes) 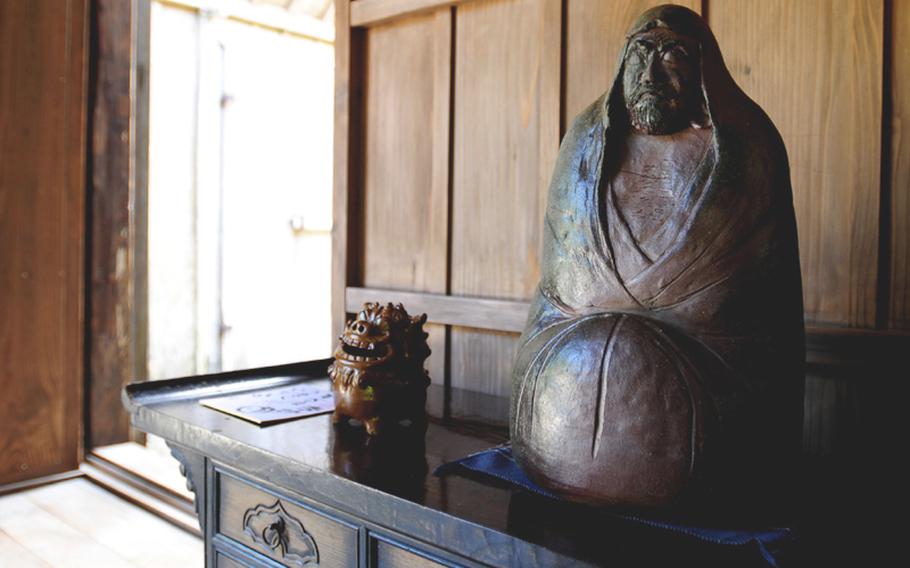 Beautiful artwork and sculptures are placed throughout the Nakamura House. Otherwise, the rooms are surprisingly bare with scant use of furniture. (Matt Orr/Stars and Stripes) Each small room in Nakamura House is bare of major pieces of furniture and is adorned with beautiful sculptures or pottery. This lends to making the rooms appear larger than they actually are. (Matt Orr/Stars and Stripes) The entrance to the Nakamura House is located just across the narrow road from the visitor's center. Entering the main gate, the large, horizontal stone wall at the end of the short walkway is called the Hinpun and separates the house from the main gate. It's intended to prevent evil spirits from entering the residence. (Matt Orr/Stars and Stripes) 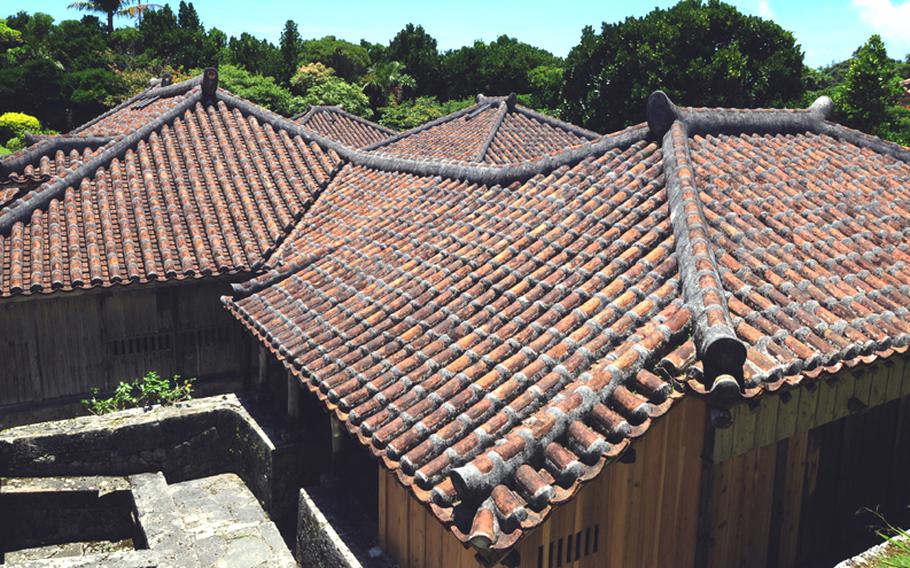 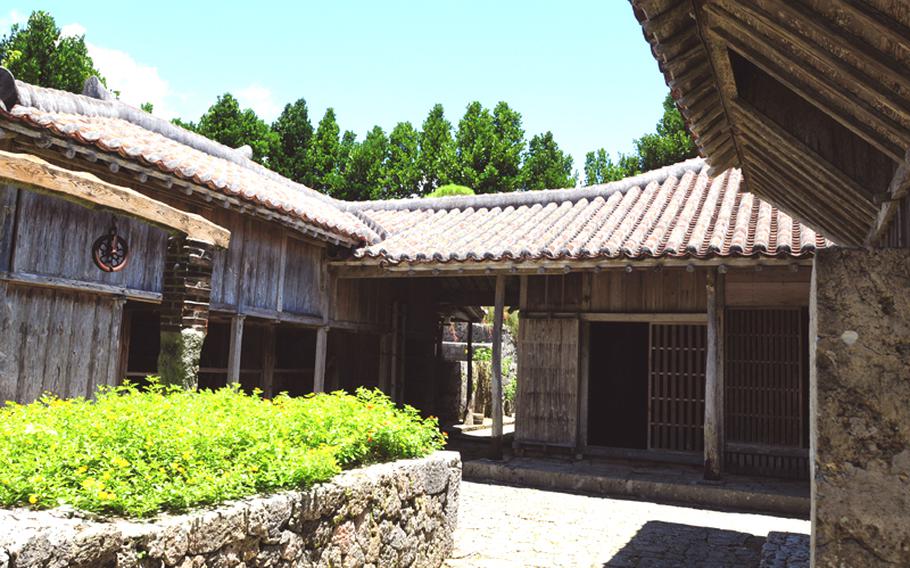 A small courtyard with a freshwater well is surrounded by the storage shed, a small stable and the main living quarters at the Nakamura House. (Matt Orr/Stars and Stripes) Each small room in Nakamura House features few major pieces of furniture but is adorned with beautiful sculptures, pottery, other objets d&#39;art or, in this room, a family altar. Using few furnishings lends to making the rooms appear larger than they actually are. (Matt Orr/Stars and Stripes)

It&rsquo;s said that your first summer on Okinawa is your worst, and by your second, the heat is no big deal.

This is my second scorching summer on Okinawa. It is a big deal.

The air conditioner at my house is always on, and I often wonder how Okinawans survived the brutal summers here for hundreds of years without air-conditioned homes.

If you have a little time and want to see for yourself how they managed, the nearly 300-year-old Nakamura House is definitely worth a visit.

The historic home is just minutes from the Legion Gate of Camp Foster and sits on a plot of land 1,557 meters square. It&rsquo;s designated a cultural asset by the Japanese government.

Nakamura House dates to about 1720, when one of the Nakamura family ancestors was called upon to serve as a Jitoshoku &mdash; or village headman &mdash; by the royal government in Shuri.

The house is typical of the rich farmers&rsquo; residences of the time and was originally covered with a thatch roof &mdash; not the traditional Okinawa red roof tiles that cover it today.

It is surrounded by lush, subtropical gardens, and its large, protective Fukugi trees have helped the old place survive many typhoons.

How did the original owners handle the heat? The rooms all open up to the outside, allowing a breeze to circulate throughout the house.

Across a small courtyard are a small barn and a well that yields cool water. Three pig pens are located toward the rear of the building.

The house has been handsomely restored, and each room contains some beautiful art pieces.

Directions: Head straight out Legion Gate and go straight across the intersection. Go past the intersection that leads to the Okinawa Expressway and then make your next right at the traffic lights at the Sergeant Major Gate. Keep on this road for a very short distance until you see the signs for Nakamura House.