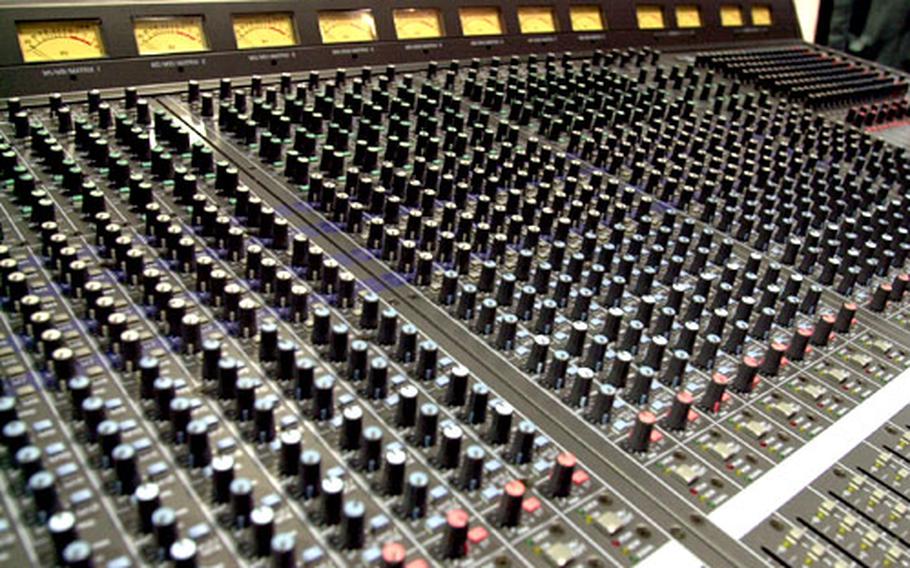 All the knobs on this Yamaha M300A analog mixer are quite intimidating. But it is a matter of setting them right to get the right mix for a hit recording. (Michael Abrams / S&S)

All the knobs on this Yamaha M300A analog mixer are quite intimidating. But it is a matter of setting them right to get the right mix for a hit recording. (Michael Abrams / S&S) 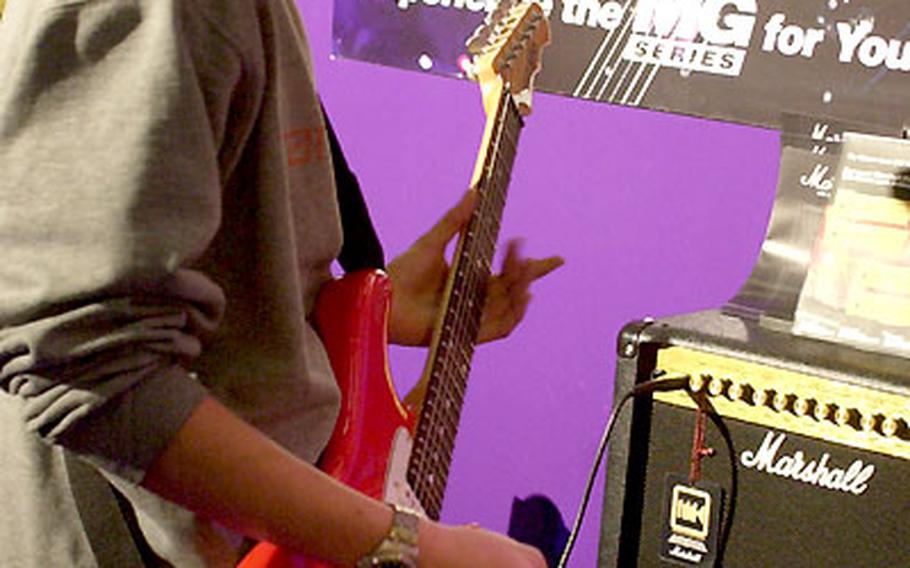 A visitor to Musikmesse 2003 finds out what an electric guitar sounds like through a Marshall amplifier. (Michael Abrams / S&S) 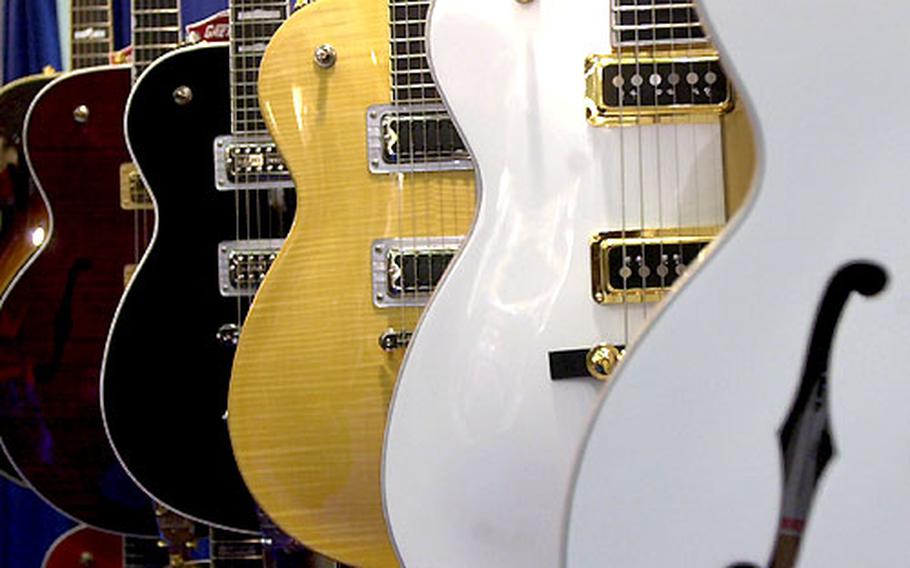 A line of beautiful Gretsch guitars on display at Musikmesse 2003. (Michael Abrams / S&S) 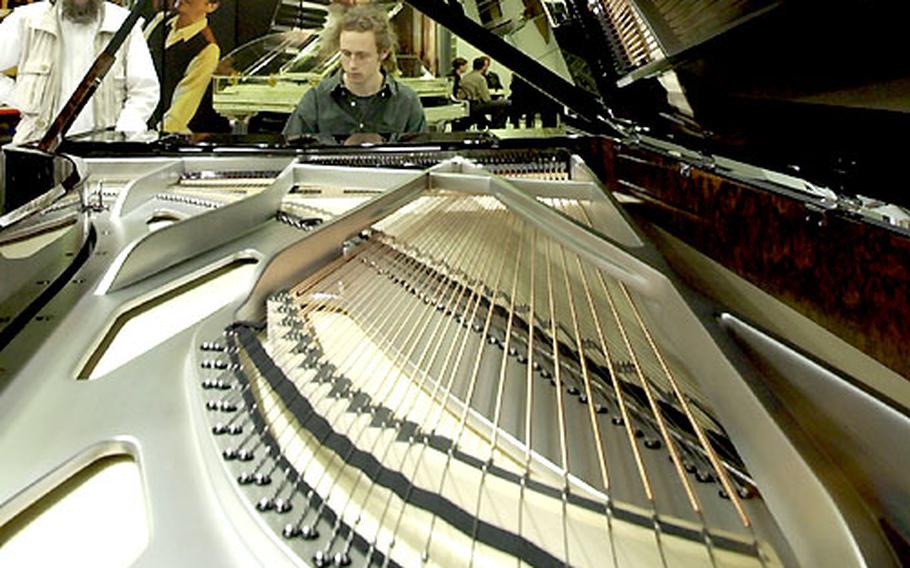 The inside workings of a Steinway grand piano. (Michael Abrams / S&S) 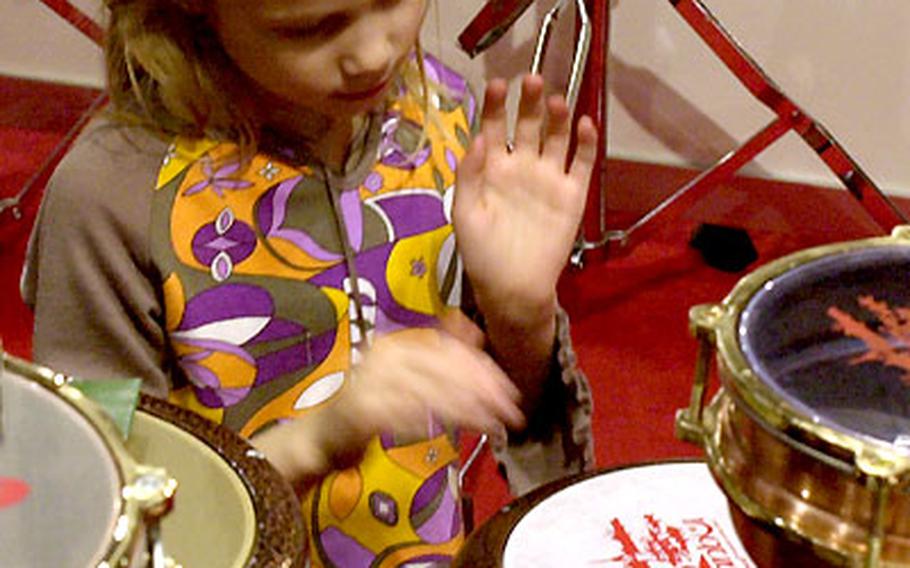 A young girl beats out a rhythm on a drum set. (Michael Abrams / S&S)

Or an American Idol? Need the turntables to follow in the footsteps of the late, great Jam Master Jay? Or be the man behind it all, like P.Diddy?

At the recent music trade show Musikmesse 2003 in Frankfurt, Germany, you could find just about anything you need to get you there: guitars, amps, microphones, keyboards, turntables, digital studios and analog mixing boards.

American guitar makers Gibson and Fender, who have supplied axes to everybody from Jimmy Page to Eric Clapton and Slash, showed extended lines of guitars, including the renowned Gibson Les Pauls and Fender Stratocasters. A bevy of colorful, custom-painted Stratocasters were on display as was a Mark Knopfler, of Dire Straits fame, signature Strat.

Signature guitars seem to be in fashion at the moment as Martin guitars showed off its Jimmy Buffet and Graham Nash lines of acoustic guitars.

Fender also had its line of amplifiers on display. Many were ultra-modern, but many were quite retro, some using tubes still &#8212; or again &#8212; and with classic names like Bassman, Champion or Roadrunner.

It was much the same over in the Marshall camp, where legendary amp maker Jim Marshall still makes the amp and speakers made famous by Jimi Hendrix.

Besides building powerful amps that could bring down the walls of Jericho, both Marshall and Fender make amps that will make your mom yell at you to turn it down, but won&#8217;t do structural damage to the house. And both make portable, battery-powered amps if you want to play the streets and squares of Europe.

For the disc jockey, Stanton offered a bevy of direct-drive turntables, including a portable setup with twin tables for in-the-club or at-home scratching pleasure.

If singing is your thing, microphone maker Shure has a new line of wireless mikes that sound clear as a bell &#8212; with the right speakers, of course. Wireless is nothing new, but the quality has gone up and the prices down, so if you do a serious amount of performing, now might be the time to get away from the tangled wire mess.

Most of the microphone companies are offering wireless for just about any instrument, too. There were displays of small mikes that clip on the bell of a sax, trumpet or trombone, or on a violin.

Yamaha also was offering instruments that will make your barrackmates happy: silent instruments. Plug in a pair of earphones and listen to yourself play music that no one else can hear. Guitars, violins, cellos and upright basses, not to mention keyboards, come in this design. They are battery-powered too, so you can play wherever you like.

And if you really need to shake the walls and rattle windows, just plug into an amp and blast away.

All the electronic keyboard makers like Yamaha, Roland or Casio have extended lines of keyboards for the beginner to the pro. Many offer canned musical accompaniment, and with some you can put in a CD (or CD-W) of recorded music and play along, or lead over it.

Roland, besides showing its line of keyboards, organs, synthesizers and electric pianos, also had its VGuitar System on display. This little box with pedals, knobs and buttons will turn your guitar into a six-string synthesizer.

To put it all together, Yamaha digital RS7000 Production Studio has what you need to record songs, backing tracks or sound loops in a small package. If you&#8217;re ready to record your first Grammy release or do the mix for your band&#8217;s concert in an arena, it also makes a 56-track mixing board that will set you back over 20 grand.

If this is all too much modern nonsense for you, don&#8217;t worry &#8212; Hofner still makes the same bass that Paul McCartney played when he was Fab.