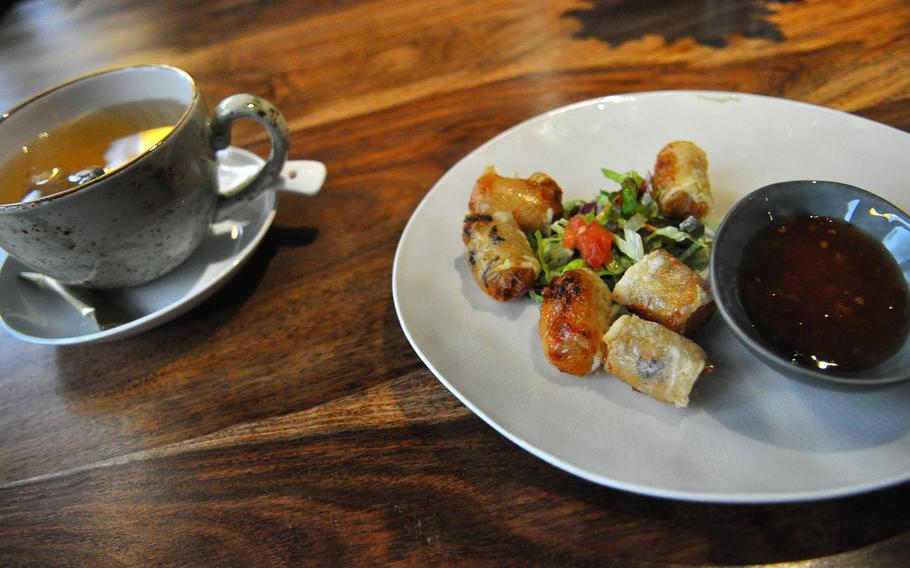 The delicious lime-chili sauce accompanying the bite-size prawn spring rolls at Mr. Lian was the best part of the appetizer, pictured with a generous cup of green tea. The self-described Asian fusion restaurant opened in Einsiedlerhof, Germany, about two months ago. (Jennifer H. Svan/Stars and Stripes)

The delicious lime-chili sauce accompanying the bite-size prawn spring rolls at Mr. Lian was the best part of the appetizer, pictured with a generous cup of green tea. The self-described Asian fusion restaurant opened in Einsiedlerhof, Germany, about two months ago. (Jennifer H. Svan/Stars and Stripes) 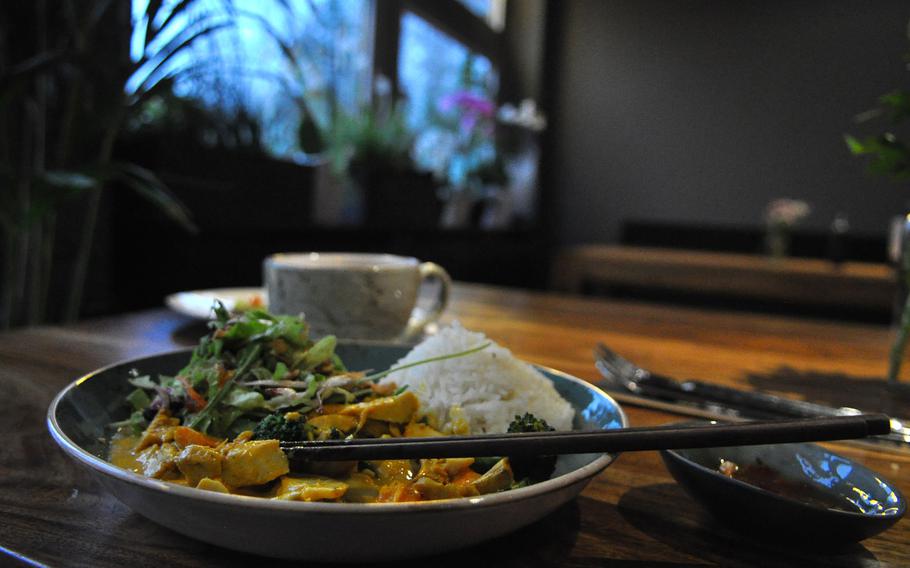 The wildkraeuter chicken curry at Mr. Lian was creamy, thanks to the coconut milk, with just the right amount of spice. (Jennifer H. Svan/Stars and Stripes) 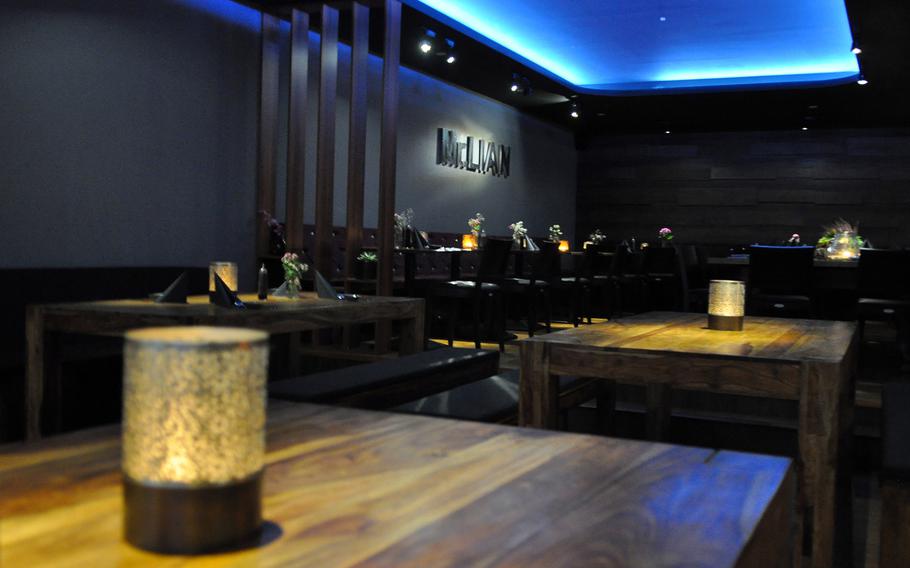 The dim lighting inside Mr. Lian, an Asian fusion restaurant in Einsiedlerhof, Germany, is softened by candelight at each table. (Jennifer H. Svan/Stars and Stripes) 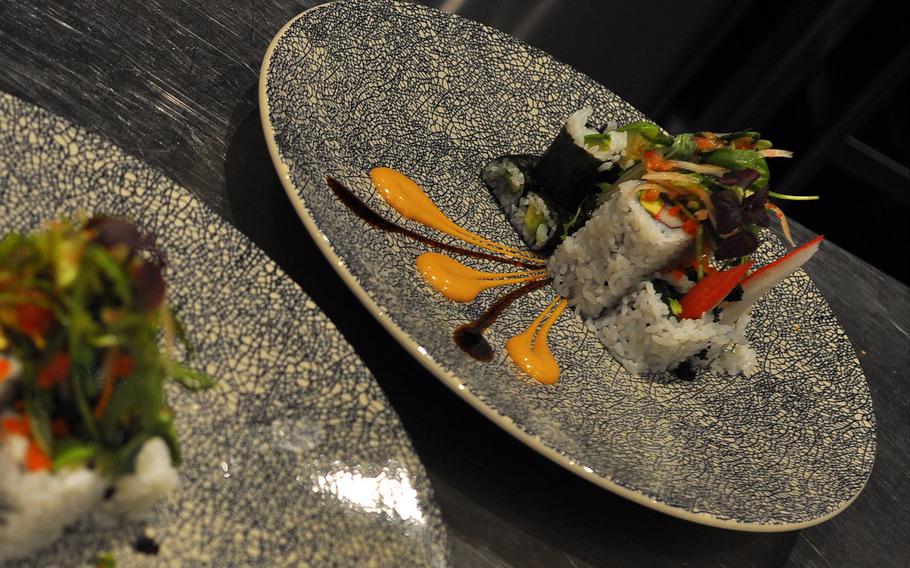 Sushi is prepared like a work of art, say staffers at Mr. Lian in Einsiedlerhof, Germany. (Jennifer H. Svan/Stars and Stripes) 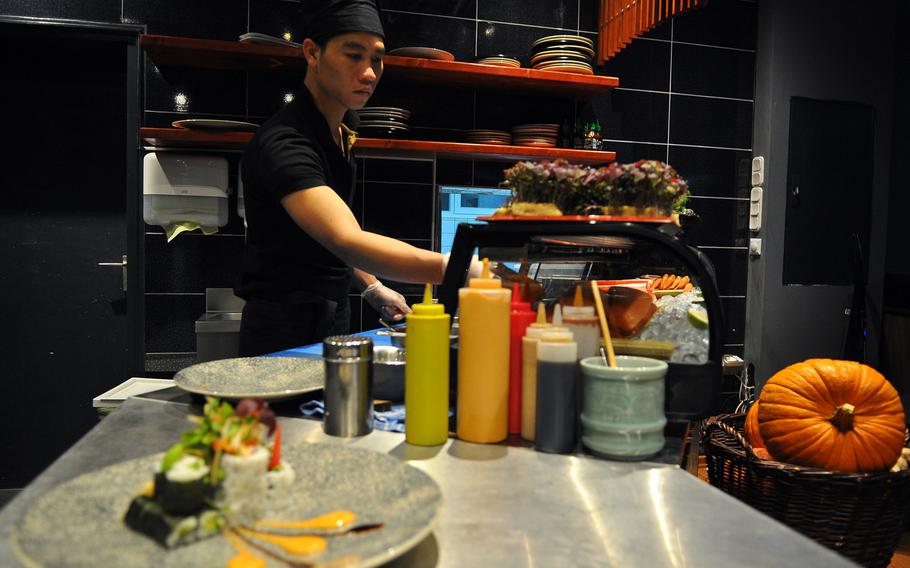 A sushi chef works out in the open at Mr. Lian. (Jennifer H. Svan/Stars and Stripes)

A yummy sushi place with a bit of elbow room.

Mr. Lian, which opened about two months ago in Einsiedlerhof, is that and much more.

Staffers describe the cuisine as “Asian fusion” — or a mix of the best kinds of foods Asia has to offer. So far, the eclectic approach seems to be working. Mr. Lian has generated loads of positive reviews on its Facebook site, with more than just a few customers claiming it to be their new favorite Asian restaurant in the Kaiserslautern area.

While such pronouncements in schnitzel-heavy Germany don’t carry the weight they would in, say, Hong Kong or even Seattle, they certainly make Mr. Lian worth checking out.

Late in the afternoon on a recent weekday, I had the place to myself. But that was only because I beat the after-work crowd, staffers told me, pointing to numerous tickets stuck on the wall tracking reservations.

Good thing Mr. Lian has more space than some of the other sushi restaurants in town, where the squeeze can be so tight between tables that elbows sometimes knock.

For bigger groups, the restaurant has several large tables with benches; there are plenty of smaller tables for a more intimate dining experience.

Though it’s a bit dark inside, the glow from flickering candles on each table lightens the mood. The dim lighting isn’t meant to hide anything: The tables were so spotless I wouldn’t flinch if my 4-year-old dropped a noodle on one and popped it into his mouth.

I vacillated between the sushi and other choices, the latter with names like Mama Mango, Kamo Temptation and Green Garden. I opted for the WildKraeuter Curry with chicken, a coconut curry dish served with a salad and sesame rice. For an appetizer, I ordered the prawn spring rolls.

The five spring rolls were bite-size. I couldn’t really taste the prawn, but no matter. The rolls were crispy and hot, and the homemade lime-chili dip was tasty enough to eat with a spoon.

The curry hit the right notes, creamy with just the right zing. I think there might have even been a few chunks of papaya mixed in.

The green tea was also delicious: Served in an oversized cup, it was the perfect warm drink for a dreary December day.

I’ll definitely go back with more people to try the sushi. A chef prepares sushi rolls out in the open behind a counter. Each roll is a “work of art,” one staffer said, recommending selections such as the Kamasutra, a mix of sushi rolls for two people, and the Robu Invasion, which includes an Alaska inside-out roll, sake maki, kappa maki, tuna tempura, seaweed salad and nigiri.

Directions: Located next to the House of Clocks near the end of the road.