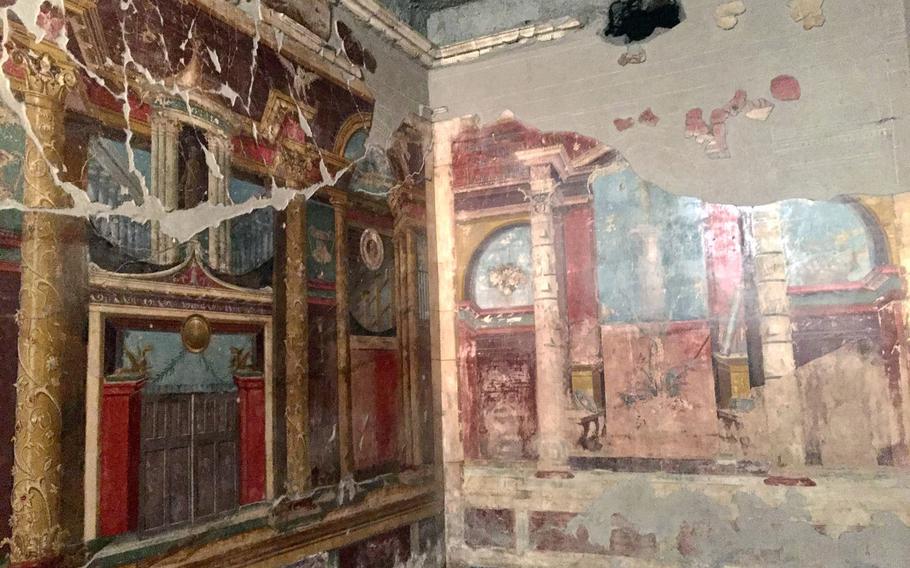 Oplontis Villa A near Pompeii is believed to have been the second home of Nero's wife, Poppaea. Mount Vesuvius' eruption in A.D. 79 buried the gigantic villa in ash, which preserved the frescoes. (Scott Wyland/Stars and Stripes)

Oplontis Villa A near Pompeii is believed to have been the second home of Nero's wife, Poppaea. Mount Vesuvius' eruption in A.D. 79 buried the gigantic villa in ash, which preserved the frescoes. (Scott Wyland/Stars and Stripes) The caldarium frescoes at the Oplontis Villa depict Hercules in the garden of Hesperides. The ash from Mount Vesuvius' eruption preserved the villa's frescoes, many of them in fine detail. (Scott Wyland/Stars and Stripes) A closer view of the fresco of Hercules at the Oplontis Villa near Pompeii. (Scott Wyland/Stars and Stripes) 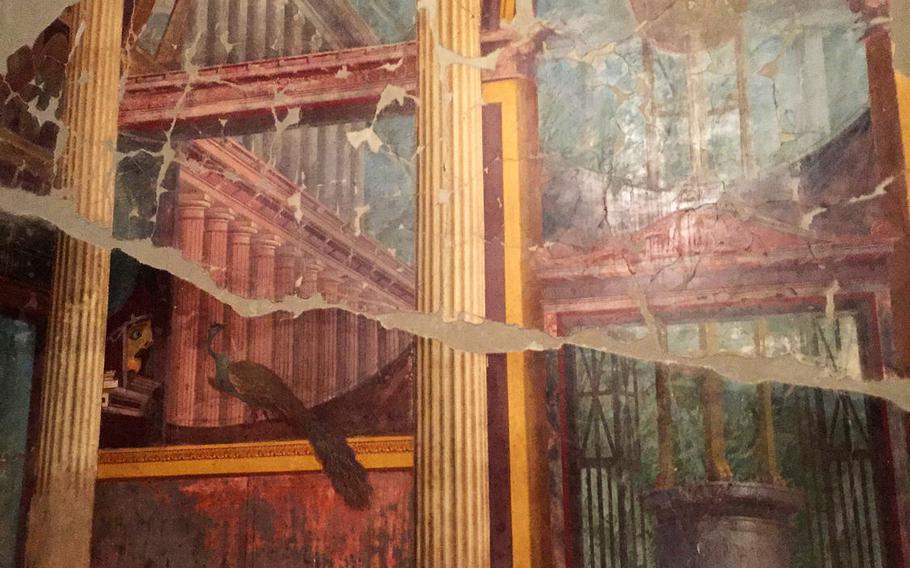 Frescoes fill the walls of the Oplontis Villa near Pompeii, where Nero's second wife, Poppaea, was believed to have stayed whenever she was away from Rome. (Scott Wyland/Stars and Stripes) Although some of the Oplontis Villa's frescoes are marred by time and Mount Vesuvius' eruption in A.D.79, most are still intact, as are much of the villa's main structures. (Scott Wyland/Stars and Stripes) 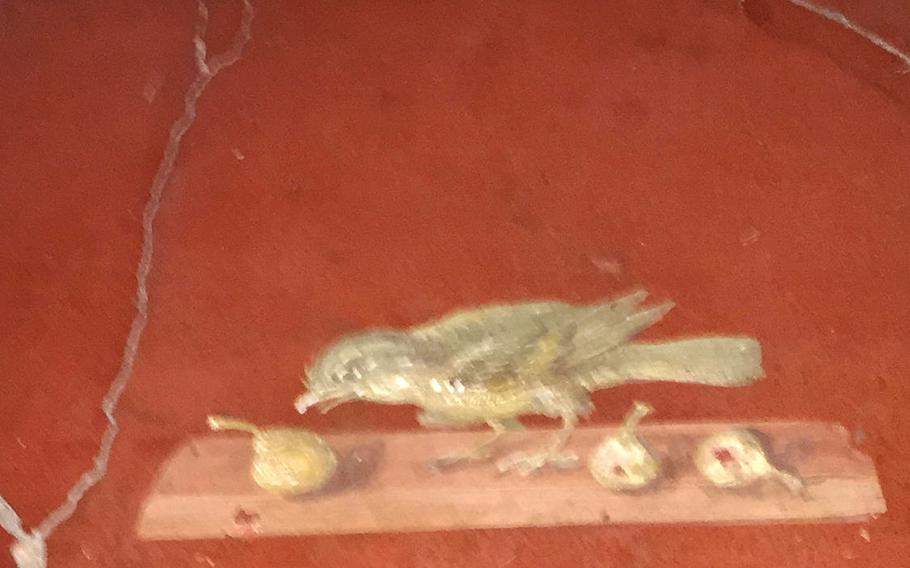 A thumb-sized bird painted almost 2,000 years ago on a wall illustrates how well ash from Mount Vesuvius preserved the Oplontis Villa's frescoes. (Scott Wyland/Stars and Stripes) 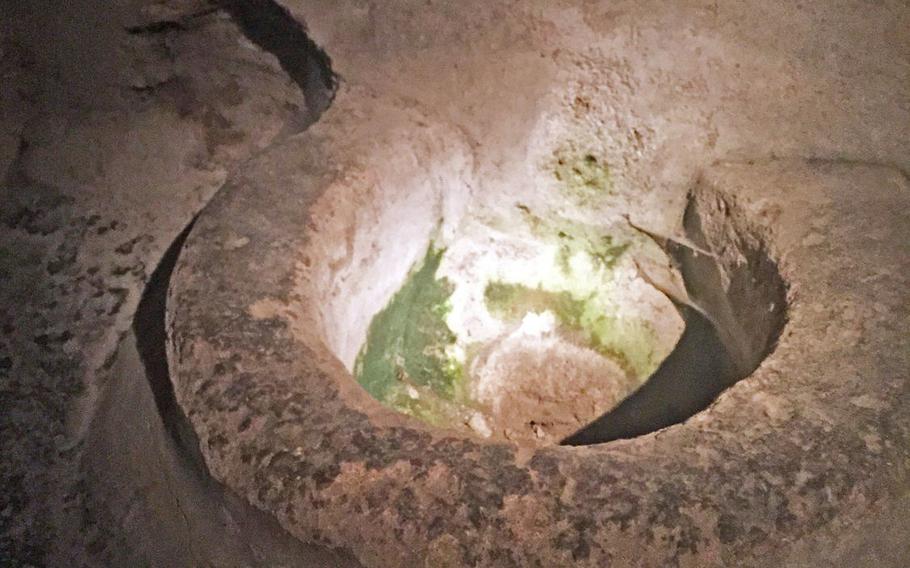 An ancient toilet at Oplontis. The seaside villa used a continuous flow of water beneath the commodes to flush away the waste. (Scott Wyland/Stars and Stripes)

Visitors flock to Pompeii and Herculaneum to see the ruins of two cities that Mount Vesuvius buried in ash and lava almost 2,000 years ago. But a lesser-known ancient town called Oplontis, where the Roman elite built seaside villas, also fell victim to the volcano.

One villa that the emperor Nero owned and where his second wife, Poppaea, often stayed is open to tours.

It’s known as Villa Poppaea. Archaeologists have dubbed it Villa A because it is one of two Oplontis villas that have been unearthed. The other — a more modest, rustic villa that the owner used in making wine and olive oil — is closed to the public.

Like Pompeii and Herculaneum, the volcanic ash preserved most of Villa Poppaea’s original structures along with portions of its frescoes in vivid, striking detail.

The villa was extravagant for its day and immense. An initial yearlong excavation in 1839 and a more extensive one from 1964 to the mid-1980s uncovered only parts of it, but those sections include an estimated 60 spaces and an outdoor swimming pool that’s 60 by 17 meters.

The frescoes were painted in phases between the first century B.C. and A.D. 50 in mostly bright hues. Some depict ornate building facades with columns, and others show pastoral scenes such as Hercules in the garden of Hesperides.

Class differences can be observed in the architecture. Scholars have determined that the more spacious sections are where Poppaea and her wealthy guests slept, dined and gathered for parties. In contrast, servants shared upstairs quarters close to where they worked, and kept their infants in a cramped room below them, with a small hole in the ceiling so they could monitor their babies’ cries.

A continuous flow of water from the bay was funneled beneath stone toilets to wash away the waste.

Unlike Pompeii, which is on a sprawling archaeological site where new discoveries are regularly made, Villa Poppaea is enveloped by the Naples suburb Torre Annunziata.

The Sarno Canal and a pasta factory to the south and a military compound and busy street to the west prevent further excavation. So visitors only get a partial glimpse of what was perhaps the grandest Roman villa on the bay.