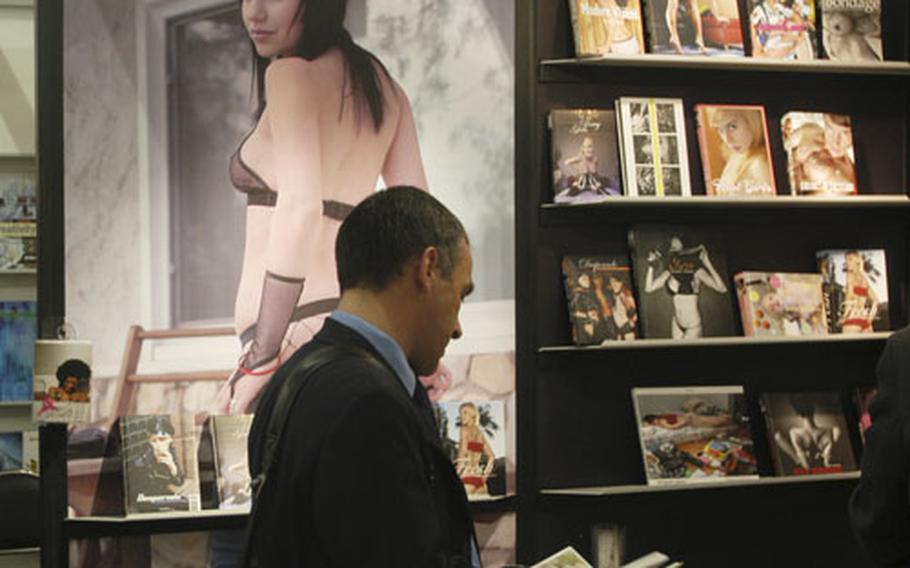 A small publisher draws big interest with his display of books and models at the Frankfurt Book Fair. The publisher specializes in books on the human form. (Peter Jaeger / S&S)

A small publisher draws big interest with his display of books and models at the Frankfurt Book Fair. The publisher specializes in books on the human form. (Peter Jaeger / S&S)

This multicolored design is part of the logo of the Frankfurt Book Fair. It was seen on the fair&#39;s hallways, brochures and display areas. (Peter Jaeger / S&S) 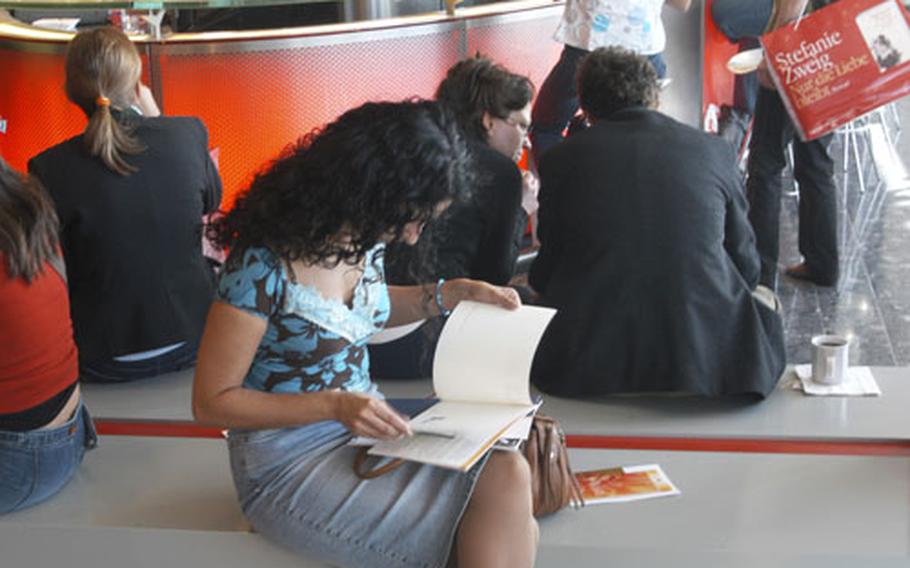 Tired after walking miles of aisles, a visitor to the Frankfurt Book Fair sits down to look through one of the fair&#39;s brochures. (Peter Jaeger / S&S)

One attraction of last month&#8217;s Frankfurt Book Fair was a new crop of books about current events in the Middle East presented by publishers from around the globe.

Most compelling were memoirs and children&#8217;s books.

More than statistics, political viewpoints or policy positions, the memoirs bring the reader closer to the truth by speaking in the voices of those who have experienced what they&#8217;re writing about.

The children&#8217;s and young adult books reflect how the world looks to its younger residents, who despite their age must cope with many serious problems.

Exhibitors from 101 countries displayed more than 380,000 titles, making it impossible to see everything. But from what I did see, here are some suggestions for good reading in upcoming months.

Memoirs and reference&#182; &#8220;Journey to Hell,&#8221; by Mourad Benchellali, was released last month in France. He traveled to Afghanistan in the summer of 2001 on a trip arranged by his older brother and ended up in an al-Qaida training camp. Despite his efforts to leave, it wasn&#8217;t until six weeks later, around the time of the Sept. 11 attacks, that he succeeded. Before he could return to France, he was arrested by the Pakistani army, placed in U.S. custody and flown to Guantanamo, where he was kept for 46 months. In the English excerpts reviewed, Benchellali details his struggle in clear, intensely personal, detail. Publication rights in English are still being negotiated.

&#182; &#8220;Fallujah,&#8221; by Jonathan Holmes, is based on testimony from Iraqi civilians, U.S. and British military servicemembers and journalists who witnessed the fighting in Fallujah in 2004. The release was postponed to April to correspond with the opening of a play by the same name in London.

&#182; &#8220;Inside the Jihad: How I Infiltrated Al Qaeda and Was Abandoned by Western Intelligence,&#8221; by Omar Nasiri, &#8212; a pen name &#8212; is about Nasiri&#8217;s claimed involvement in Europe&#8217;s terrorist underground in the 1990s and how he became a spy for a leading Western intelligence service. The book was released this month in eight countries the day after a documentary aired on BBC television.

&#182; &#8220;Bankrolling Basra,&#8221; by Andrew Alderson, is still being written and is scheduled for publication in April. Alderson, a former London merchant bank director was called up to serve in Iraq. His first day in Basra, he was put in charge of Basra&#8217;s central bank and the multimillions of dollars that came with it. His job was to keep the cash moving in any way possible &#8212; by suitcase, crates and bags stuffed with cash and moved by helicopters, planes, cars and speedboats.

&#182; &#8220;Jihad Incorporated,&#8221; by Steven Emerson, is a followup to &#8220;American Jihad: The Terrorists Living Among Us&#8221; and is a nuts-and-bolts account of terrorist groups operating in the United States. The 500-plus pages includes detailed information about false charity organizations and the fortunes they accumulate, and techniques jihad groups use to recruit members. Emerson names names, cites dates and quotes from official documents. What he doesn&#8217;t do is offer solutions.

Children&#8217;s titles&#182; &#8220;I Miss You: A Military Kid&#8217;s Book About Deployment,&#8221; by Beth Andrews, illustrated by Hawley Wright, is written by a social worker experienced in assisting military families. The book, scheduled for release in April, is a teaching tool to help children discuss their feelings and reassure them that they are not alone. It includes a guide for parents.

&#182; &#8220;The Shalamar Code,&#8221; by Mary Louise Clifford, is young-adult fiction set in today&#8217;s Pakistan. Mumtaz is a teenage girl struggling to help her brother who is being held hostage. The author has lived in Pakistan.

This year&#8217;s book fair, which is about far more than a trade fair for the publishing industry, had a record 7,272 exhibitors and some 286,000 visitors. It included public readings, movie screenings and live entertainment, an exhibitor with a tattoo parlor, presentations on such varied topics as negotiating film deals, online education and translating books, and events surrounding the culture of India, this year&#8217;s featured country.

Angela Cerrito lives in Germany and works as a physical therapist with Educational and Development Intervention Services. She is a member of the Society of Children&#8217;s Book Writers and Illustrators.