Michael Keehan ‘Everybody has an instinct to survive’ 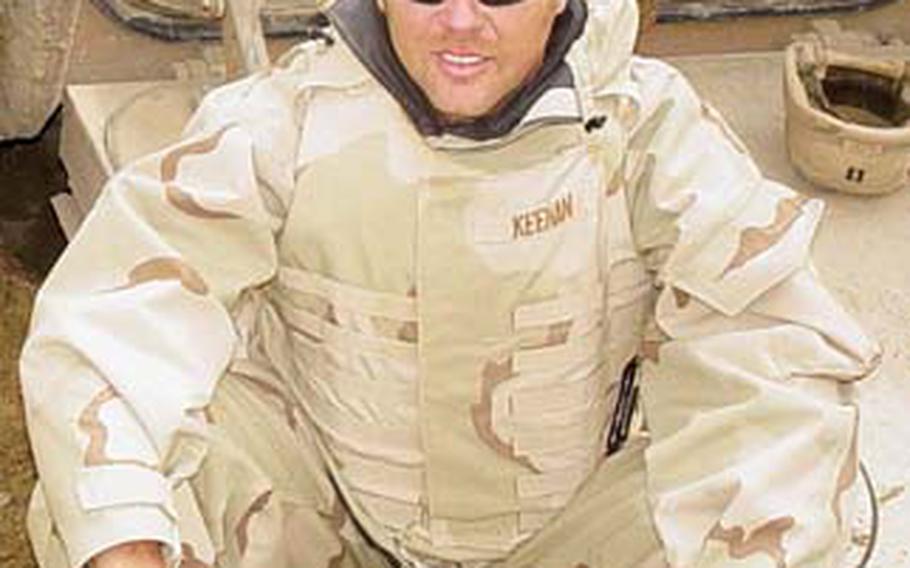 Tech. Sgt. Michael Keehan braved enemy artillery, tanks and a blinding sandstorm to call in airstrikes that kept the soldiers in his unit alive during the invasion of Iraq.

Keehan, who left the Air Force this year as a master sergeant, was awarded the Silver Star for his actions in March and April 2003, when he was the head joint terminal attack controller for the 3rd Squadron, 7th Cavalry Regiment, 3rd Infantry Division Mechanized.

The medal itself doesn&#8217;t mean that much to him, he said. What does is being told by the commander that soldiers would have been killed if he and his fellow airmen hadn&#8217;t been there.

"So we did our job right," Keehan said.

In late March 2003, Keehan&#8217;s unit arrived outside As Samawah and was met by civilians carrying white flags and cell phones.

The civilians likely called in the U.S. troops&#8217; positions to the enemy because afterward the unit started taking artillery fire, Keehan said.

When Keehan called in an airstrike on the Baath party headquarters in the city, all hell broke loose.

With artillery rounds landing only 200 yards away from him, Keehan kept calling in airstrikes to take out enemy gun emplacements. He doesn&#8217;t think about how he managed to keep it together at that point.

Later, Keehan&#8217;s unit headed to a bridge near Najaf, getting ambushed twice along the way. At one point, Keehan had to work the radio with one hand and fire his weapon with the other.

He remembers when he called in an airstrike after one ambush that the bombs went off so close to the U.S. troops that the concussions rocked the vehicles.

Then he got word from surveillance aircraft that enemy vehicles were surrounding his unit.

He put out a general SOS and got hold of four F-16s running low on fuel. They dropped a special kind of bomb from high altitude &#8212; in the middle of the sandstorm.

"Dropping bombs at 40,000 feet to get within 600 meters delineated between us and the enemy, it was pretty scary," Keehan said. "We really didn&#8217;t know what was going to happen."

To make matters worse, one of the pilots told Keehan that he had never dropped that type of bomb in combat before.

Fortunately, the bombs hit their target.

Later, enemy tanks began closing on Keehan&#8217;s position and the main element of his unit, some six miles away.

Keehan was able to reach a B-1 bomber loaded with 24 bombs.

To make sure they hit the target, Keehan had to provide specific coordinates for each bomb.

At the time, Keehan had been up for about four days and been looking at a lot of numbers, so he and another servicemember had to be very careful that they were getting the coordinates right.

Throughout the battle, Keehan was able to keep his calm due to his years of training.

"It&#8217;s robotic the way we do things. You coordinate, you get your eyes on the target or whatever you have to do," he said. "Whatever is going around you is secondary; your main job is to make sure you get things right, so you just do it."