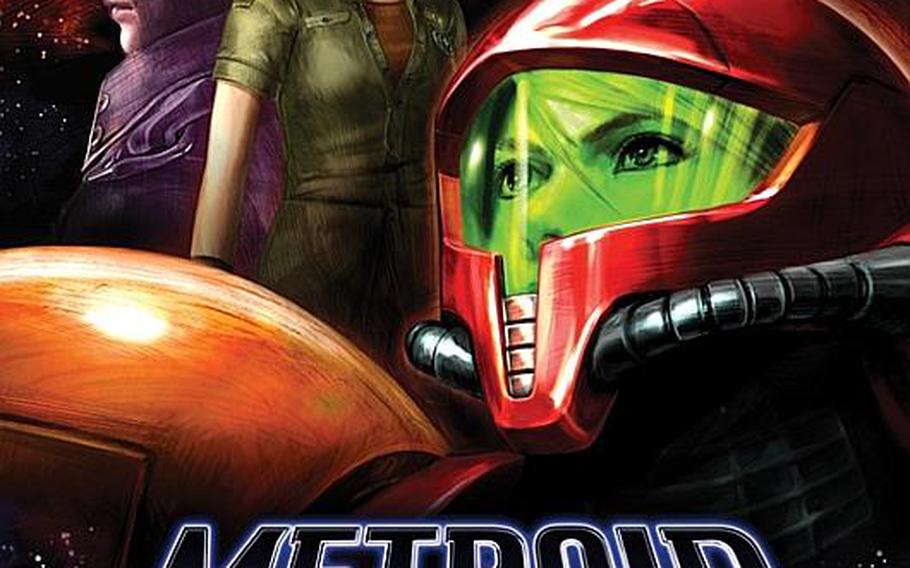 Samus delivers a high kick to a foe in 'Metroid: Other M.' (Nintendo)

“I was young … and naive,” proclaims Samus, the armor-clad and alarmingly introspective bounty hunter in the new Wii release, “Metroid: Other M.” Along with a few unexpected statements like that and a flurry of close-combat and acrobatic action, Team Ninja and Nintendo ditch the exploration, solitude and puzzle-solving of past Metroid games and replace it with hordes of creatures, close quarters and a cut-to-the-chase style of game play.

“Other M” picks up right after 1994’s “Super Metroid.” Through a long opening cinematic, we watch Samus recover from her last adventure on Planet Zebes and get pulled into the next. The intro isn’t the only place you’ll be watching a movie. “Other M” is packed with cinematics and spoken dialogue. While that might sound good on paper, unfortunately, the worst parts of “Other M” often come straight from the main character’s mouth.

In fact, most lines come off like they’re ripped straight out of your little sister’s diary. While Team Ninja may have mastered the technical skill of putting together a scene — the animation is beautiful and direction is better than what you’ll find in most games today — you’ll spend most of the time wishing as much care was spent making it sound as good as it looks.

And it does look fantastic. Set aboard a space research station, “Other M’s” world of networked rooms morph into a variety of primal, holodeck-type settings. Sterile ship corridors give way to forests overflowing with vegetation, bursting volcanic rocks, or barren Arctic wastes. Though the game maintains a sort of side-scrolling feel, the camera will shift fluidly — although not always helpfully — behind or around Samus.

Combat — by far the most radical departure from other Metroid games — lives and dies by the camera. While holding the Wiimote on its side, the game allows you to run around freely and auto-aim your shots. You also can point the Wiimote at the screen to go into first-person mode to the greatly more powerful fire missiles. The balance between these two attack styles makes for a great dynamic while facing a large group of enemies. Should you go for the hard-hitting missile attack while stuck in stationary first-person mode — or leave it to the weak auto-aimed shots as you scramble around and dodge?

But while “Other M” is filled with interesting battles, you’ll too often find yourself battling the camera angles. Defeating some foes requires precise jumping made all harder by a perspective that often doesn’t give the right amount of depth. Depth is another issue when you compare what “Other M” strips away from past Metroid games.

Where is the puzzle solving? Where’s the sense of freedom?

Both familiar and inventively new powerups play a role throughout the game, but in its fast-paced haste, Team Ninja rarely reprises any classic themes. Coming from a franchise that has a rich and well-known music, this seems like a huge oversight.

Taken as a whole, this Metroid installment doesn’t reach the grandiose, meticulous heights of it’s immediate predecessors. But despite its flaws, the acrobatic combat and side-scrolling do a fantastic job recalling the roots of the series.

“Other M” throws fast-paced combat, precision movement, a moody and introspective storyline at you — then asks if you can fight your way out. The heroine might be a little younger and more naive, but there’s still enough at the core of “Metroid: Other M” to make you want to suit up and go behind the green visor once again.