Masada: Where Jewish rebels took a stand against the Romans 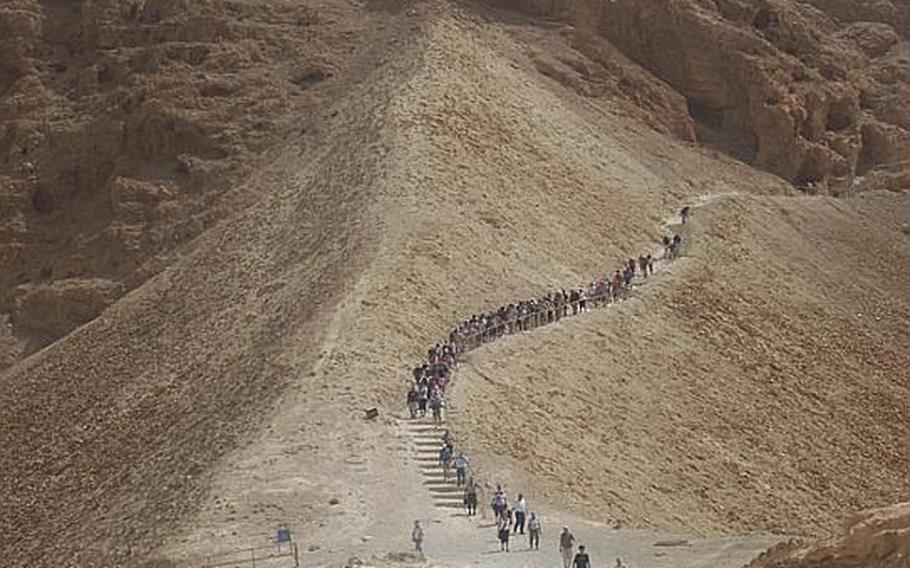 Visitors walk up the Roman siege ramp path to the Masada fortress in Israel&#39;s Judean Desert. The Romans built the ramp to to reach the fortifications and seize the citadel from Jewish rebels who were occupying it almost 2000 years ago. (Special to Stars and Stripes)

Visitors walk up the Roman siege ramp path to the Masada fortress in Israel&#39;s Judean Desert. The Romans built the ramp to to reach the fortifications and seize the citadel from Jewish rebels who were occupying it almost 2000 years ago. (Special to Stars and Stripes) 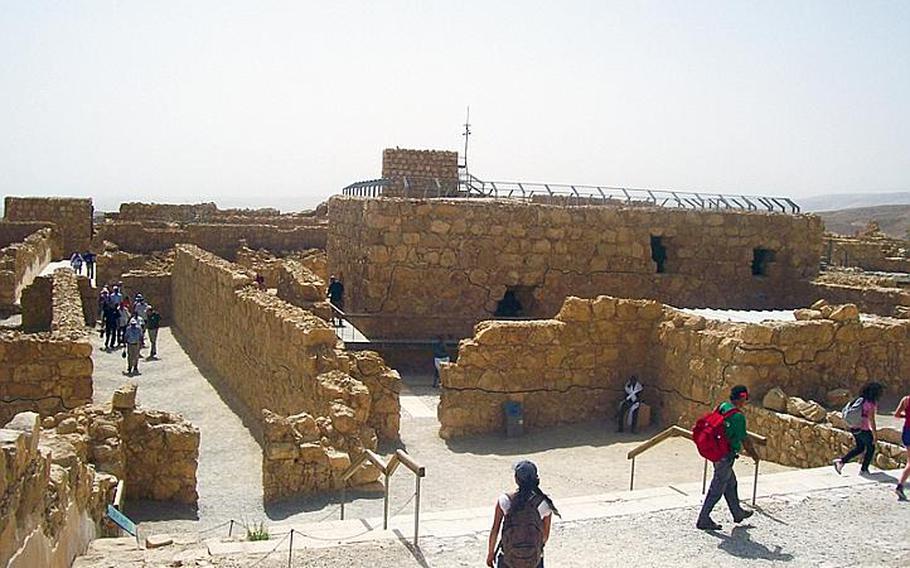 The Masada ruins include mazes of sandstone corridors and walls marking the outline of storerooms and living quarters. Ruins ranging from bath houses to palaces are scattered around the top of the mesa in the Judean Desert. (Mark Abramson/Special to Stars a) 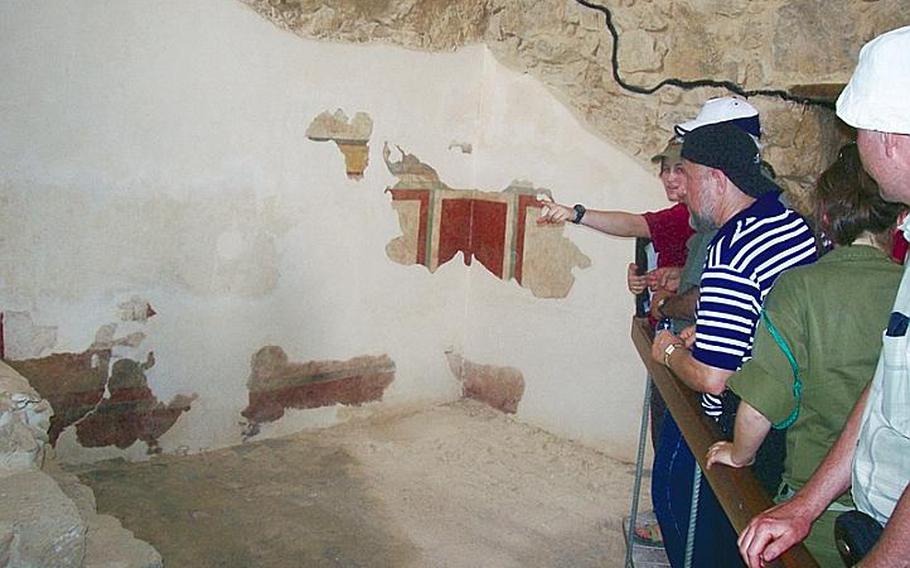 Remnants of frescoes that decorated the walls of the palaces and bath houses built by Herod the Great are still visible in the ruins of Masada. This one is in a bath house. (Mark Abramson/Special to Stars a)

Its imposing cliffs, ancient fortifications and desolate location helped make Masada a safe palatial refuge for King Herod the Great years before it was taken over by Jewish rebels and then seized by Roman soldiers in 73 A.D.

But the fortress in Israel&rsquo;s eastern Judean Desert became more. It is a lasting monument to the Jewish people&rsquo;s last stand against Roman conquerors and a major Holy Land tourist attraction.

The old palace/fort is perched high atop a mesa that offers beautiful desert vistas from any direction, including, on a clear day, a sweeping view of the Dead Sea to the east.

The U.N. Educational, Scientific and Cultural Organization calls the nearly 2,000-year-old archaeological site made up of Herod&rsquo;s citadel, the Roman camps below and the ramp built by the Romans to seize Masada, the "most complete Roman siege works surviving to the present day." Masada was designated a UNESCO World Heritage Site in 2001.

Historians believe that the fortress was built as a defense by Herod, the king of Judea, who according to UNESCO reigned from 37 B.C. to 4 B.C. He was a pro-Roman ruler, and one theory claims the fort was built as a refuge in case of a local revolt or attack from abroad.

A revolt did come &mdash; about 70 years after Herod&rsquo;s death &mdash; when a group of Jewish extremists was forced out of Jerusalem, seized Masada and used it as a base to fight the Romans. The Romans eventually laid siege to the fortress, establishing several bases with high walls around the mesa to make sure no Jews could escape from the fortress above. Then they built a ramp from their bases to Masada&rsquo;s walls to attack the rebels. In the spring of 73, after approximately a half year of siege, the Romans entered the fort.

Instead of armed resistance, they found burning storerooms and more than 900 dead bodies &mdash; the rebels had committed mass suicide rather than face defeat, slavery or execution.

The ruins atop the old outpost cover a huge area &mdash; it is nearly 2,000 feet long and about 1,000 feet wide, with old structures scattered all around. Among them are the Northern and Western Palaces, both built by Herod. The northern one, built on terraces along the mesa&rsquo;s 1,300-foot-high face, served as a villa for his family. The western one, the largest building on the site, was an "official" palace with many rooms. It was built near where the Roman ramp is today. Some people, including the officials who run Masada at the Israel Nature and Parks Authority, consider the Northern Palace the site&rsquo;s most magnificent ruin. They say the four bedrooms on the top level of the palace once had a semicircular balcony with views of the Dead Sea and the Moab Mountains to the east. It also had its own private bath house and beautiful wall paintings.

The bath houses Herod had built for Masada&rsquo;s other inhabitants are nestled inside buildings that are beautifully preserved. The baths are similar in design to Roman baths found throughout Europe in terms of heating and other systems, and some of the original paintings have endured. There are splashes of colored frescoes along the bath-house walls that are not much different from what one would find in Pompeii and other Roman cities.

Other ruins are of buildings built by the rebels.

Visitors can spend several hours on top walking through the sandstone corridors, taking a peek through windows and exploring Masada&rsquo;s other marvels. Some of the site has been restored. The restored portions are above black lines painted throughout Masada.

There is also an open-air synagogue with steps and pillars, which is marked with a metal menorah. The synagogue is said to be one of the oldest in the world.

Sites throughout Masada are labeled in Hebrew and English, and there are also models of past constructions labeled in English. Audioguides are available.

Visitors can reach the top by traversing the same earth and wood ramp the Romans built to seize the citadel and enter the ruins through the Western Gate. Cable cars run up Masada&rsquo;s eastern face to provide easy access for those who can&rsquo;t make the trek up the ramp. While the walk takes 20 to 40 minutes, it is not too difficult for any able-bodied person.

More adventurous hikers can take the Snake Path along Masada&rsquo;s eastern rock face, near the cable cars. The Snake Path is said to take 45 minutes to hike.

Along the way to the top via the Roman ramp, visitors can branch off the main path to get a look at a few of the 12 cavernous cisterns that once collected rain and floodwater to be used as drinking water and for agriculture on Masada. The other cisterns can be seen on Masada&rsquo;s top. Those cisterns helped the Jews hold out against the Romans.

Anyone making the hike on a hot day should take plenty of water, and don&rsquo;t hesitate to chug as much as needed to stay hydrated because there are plenty of water taps atop Masada to refill your bottles.

And there&rsquo;s no shortage of covered places to sit and relax on top, including a bench area that offers one of the better views of the Dead Sea.

Mark Abramson is a former Stars and Stripes reporter.