Masada: Site of the ultimate Jewish rebellion against the Romans 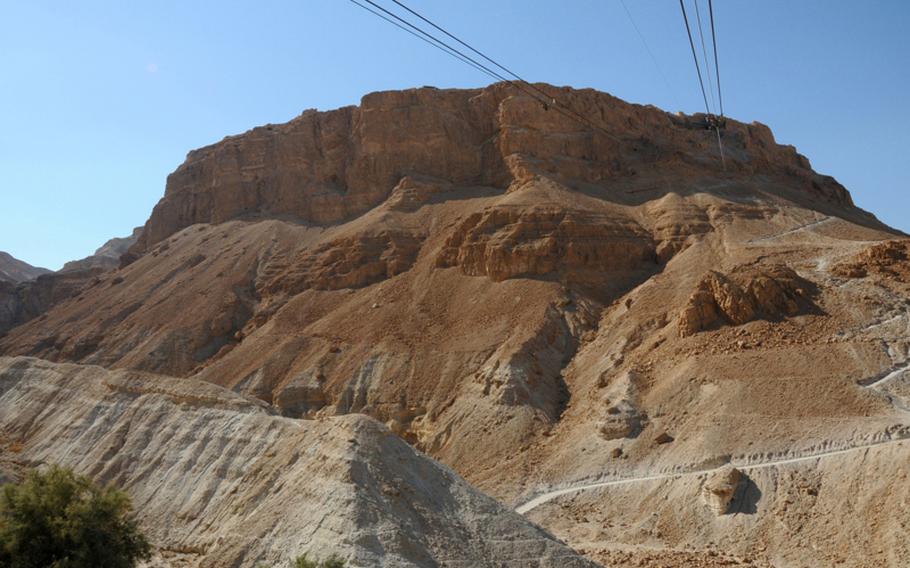 The fortress of Masada sits on the eastern edge of the Judean desert in Israel, near the Dead Sea. Visitors can take cable cars up to the top or trek up on the so-called Snake Path seen on the lower right. (Peter Jaeger/Special to Stars an)

The fortress of Masada sits on the eastern edge of the Judean desert in Israel, near the Dead Sea. Visitors can take cable cars up to the top or trek up on the so-called Snake Path seen on the lower right. (Peter Jaeger/Special to Stars an) 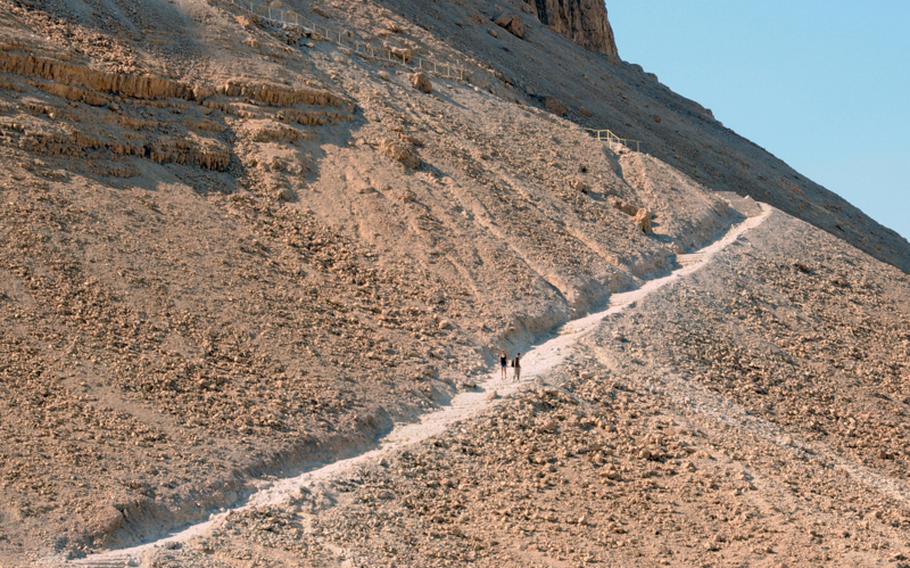 Buy Photo
A couple of visitors stroll down the Snake Path that leads to the top of the fortress. (Peter Jaeger/Special to Stars and Stripes) 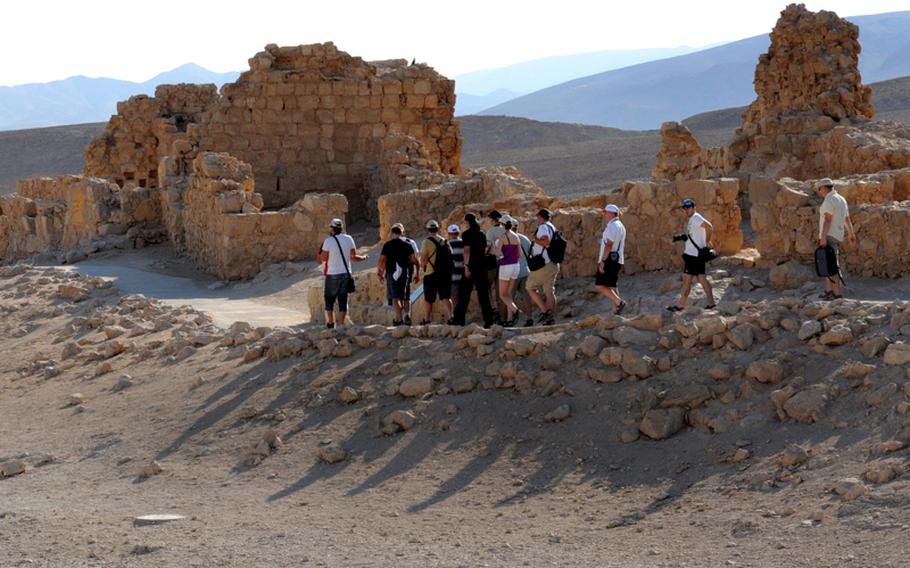 Buy Photo
Tourists pass the ruins of the Western Palace at Masada, near the point where Roman legions breached the Jewish rebels' defenses during a months-long siege of the ancient fortress. (Peter Jaeger/Stars and Stripes) 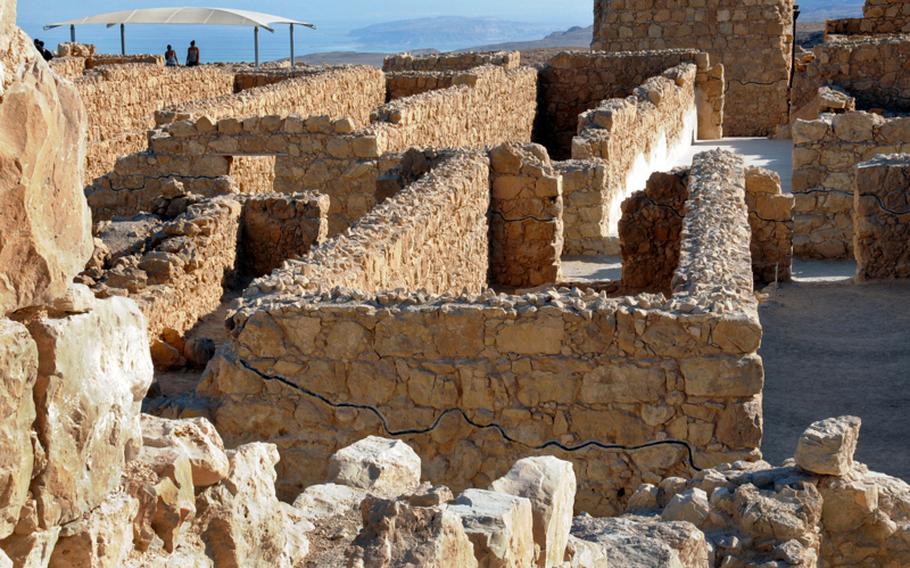 Buy Photo
The remnants of storage rooms form a labyrinth of walls at Masada. The black line on the wall in the foreground indicates the border between the old and restored sections. (Peter Jaeger/Stars and Stripes) 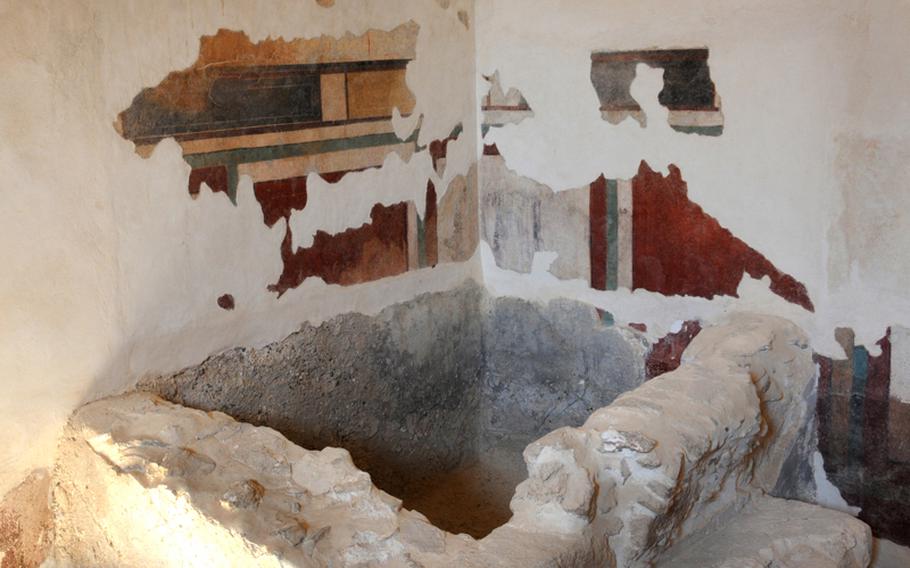 Buy Photo
Colorful frescos, Pompeii style, were among the discoveries by archaeologists at Masada. The frescos once decorated one of the baths in the ancient fortress. (Peter Jaeger/Stars and Stripes) 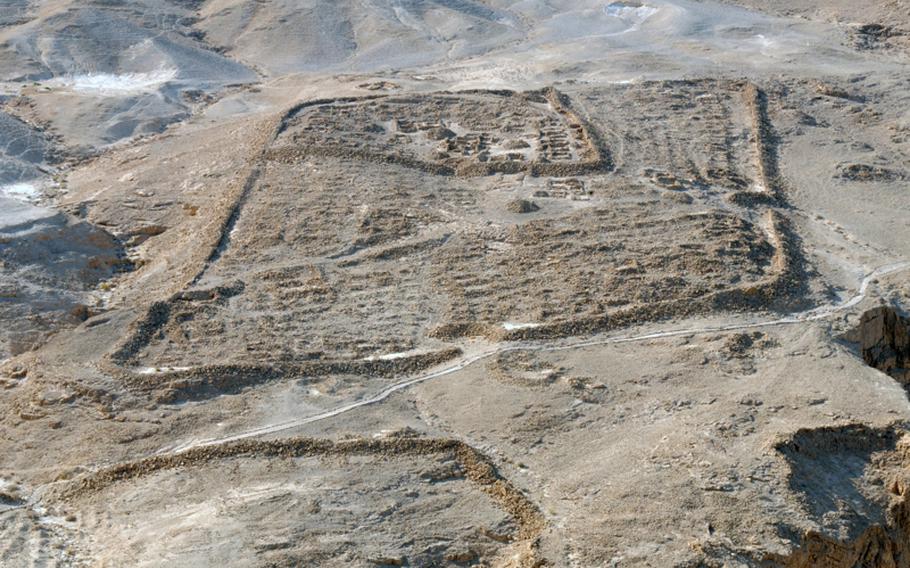 Buy Photo
Still visible today from Masada are the remains of camps housing Roman legions in the first century. The Romans were determined to oust Jewish rebels who were united against Roman rule and had sought refuge on the mountain. But the Jews were just as determined to defeat the Romans. (Peter Jaeger/Stars and Stripes) 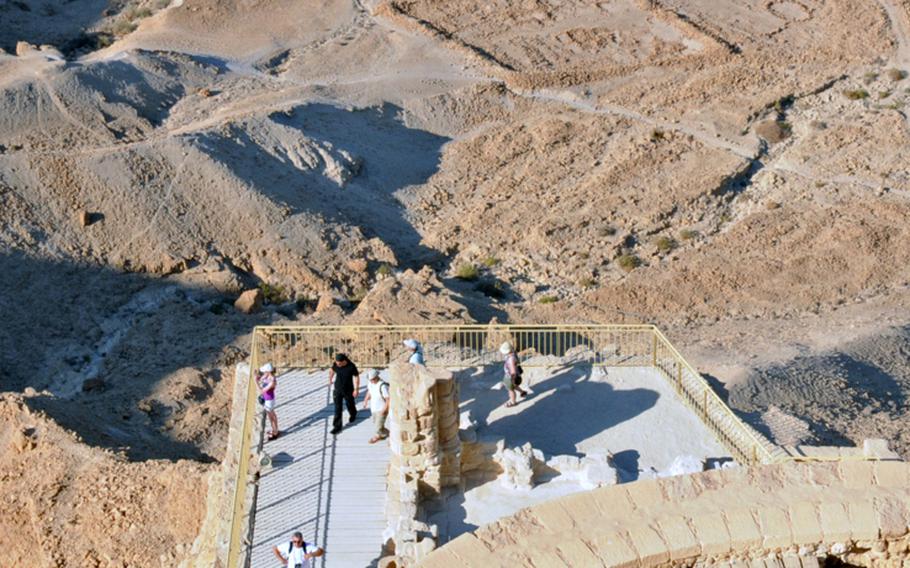 Buy Photo
Tourists enjoy the view from what was once Herod's North Palace in Masada. From there, visitors can still see the remains of camps (background) established by Roman troops. (Peter Jaeger/Stars and Stripes) 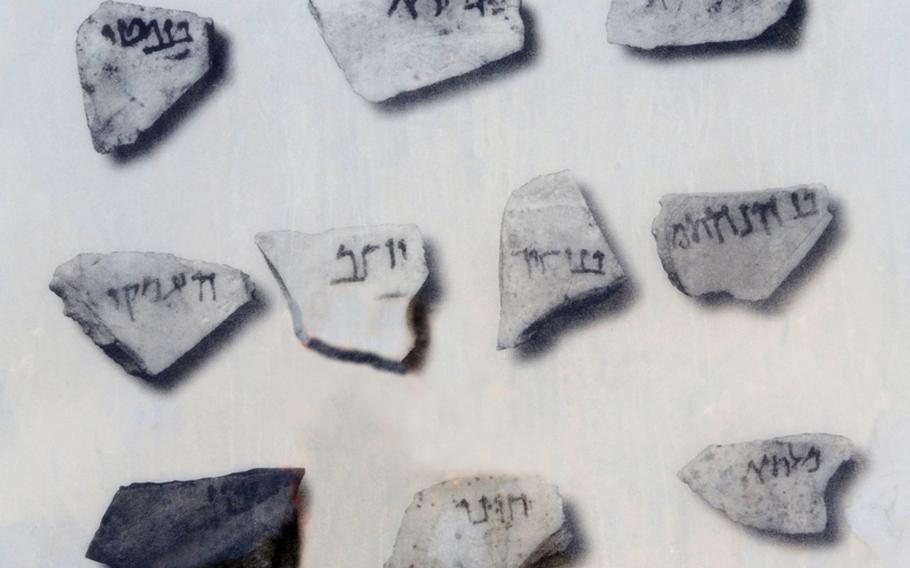 Buy Photo
These small stones, called ostraca, have been the most important discovery at Masada, according to head archaeologist Yigael Yadin. Each is inscribed with a single name. Archaeologists speculate that the stones were used in the casting of lots in the Jewish rebels' suicide pact. (Peter Jaeger/Stars and Stripes) 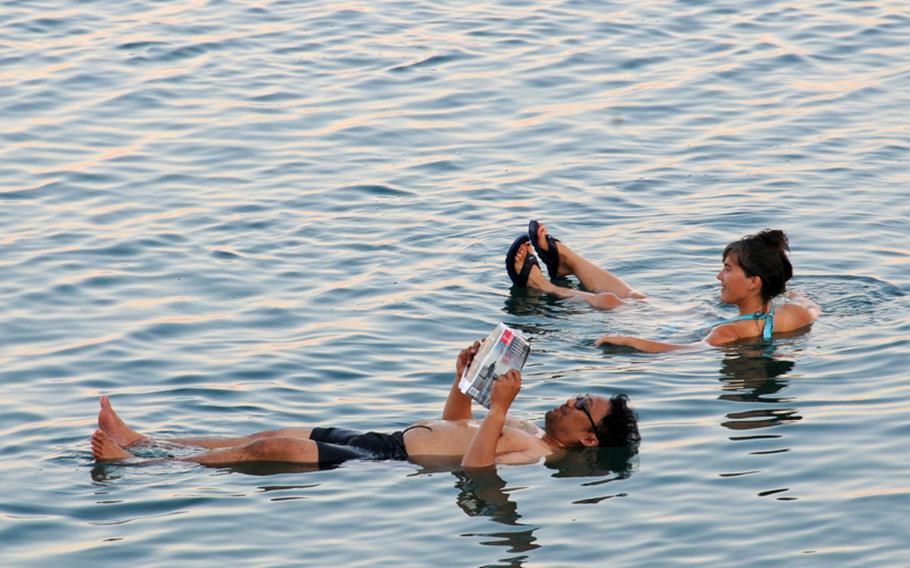 Buy Photo
Tourists relax by floating in the Dead Sea near Masada. The water contains so much salt that no life can exist in it. Forget about swimming here; because of the salt, all you can do is float. (Peter Jaeger/Stars and Stripes) 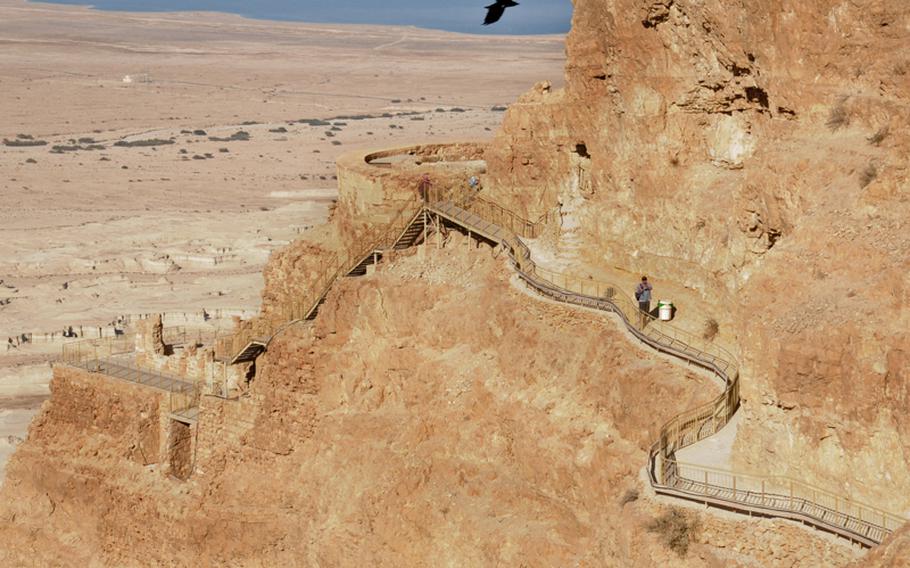 Buy Photo
The Dead Sea is visible in the background, along with the remains of King Herod's North Palace at the edge of Masada. (Peter Jaeger/Stars and Stripes) 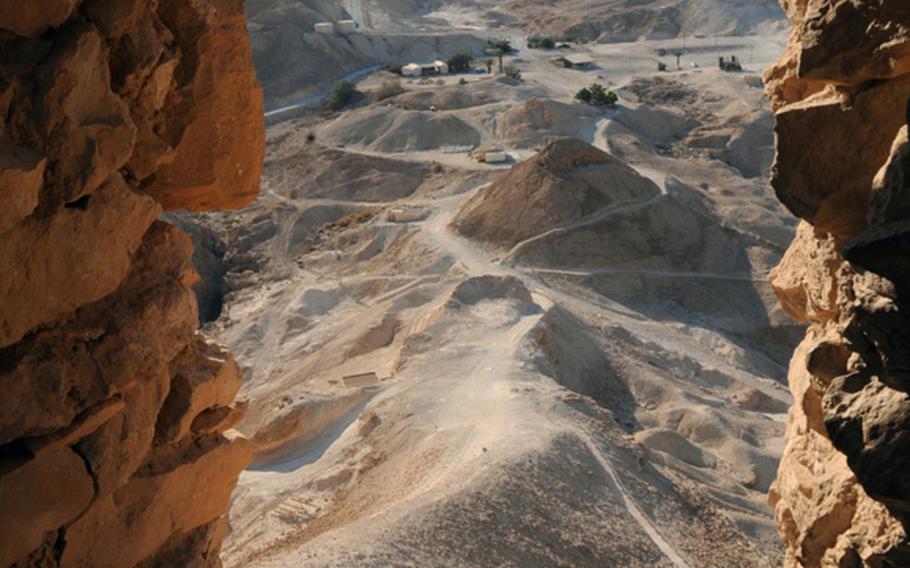 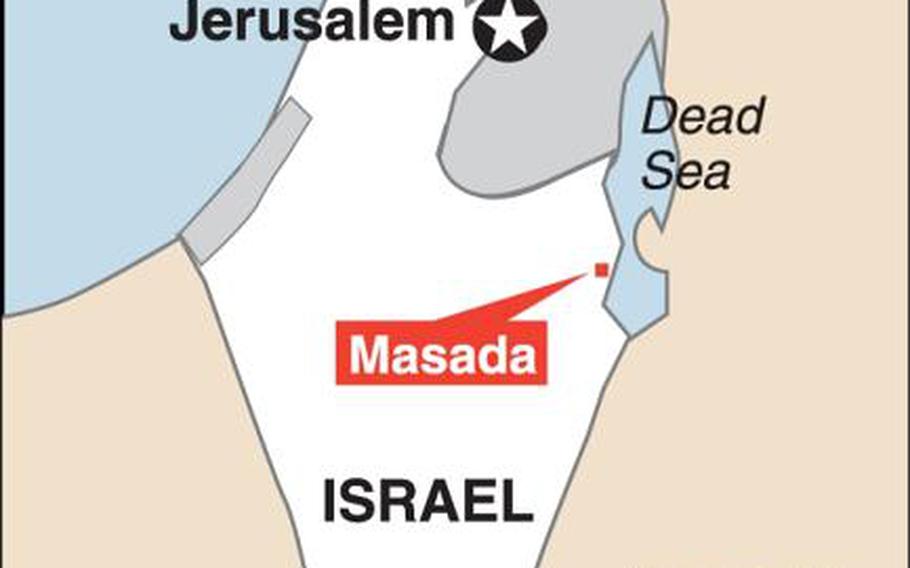 Looking out over the rugged, peacefully beautiful landscape surrounding the former Jewish fortress of Masada in Israel, it is difficult to imagine the violence and tragedy that occurred here in the first century.

This is where Jewish patriots made their last stand against a Roman army bent on wiping out any remnants of resistance to Roman rule.

Less than 70 miles from Jerusalem, the mountaintop fortress is a U.N. Educational, Scientific and Cultural Organization World Heritage site. The fortress had been built by Herod the Great, who ruled from 37-34 B.C. It originally included two palaces, bathhouses and barracks, among other facilities. So, the Jewish rebels who sought refuge here not only had an excellent defensive position, they had ready-made shelters and baths thanks to giant cisterns built by Herod to capture rainwater.

Visiting Masada is one of the highlights of a trip to Israel. You come here hoping for some great photo opportunities, but you leave in awe of the mountain and the beauty surrounding it, knowing your camera will never do it justice. You come here expecting to get a peek at what life was like during biblical times, but you leave with a humbling lesson in courage.

It&rsquo;s a privilege &mdash; one that brings goose bumps &mdash; to stroll around the ruins of this fortress, to walk in the footsteps of those who chose death over Roman slavery. Today, we know details about what happened here so many centuries ago only because they were documented by Flavius Josephus, a Jewish-Roman historian and eyewitness.

As events unfolded, the Jewish patriots who took refuge atop the mountain seemed to have the upper hand against their enemy, troops from the 10th Roman Legion. The Romans had set up camps around the base of Masada and the Jews had a bird&rsquo;s-eye view of what the enemy was up to. Looking down from the fortress today, you can still see traces of the camps where the Roman troops had hunkered down for what turned out to be a months-long siege, even though their numbers were in the thousands while the number of Jews was in the hundreds.

In the final attack, thousands of Roman soldiers charged up a stone-and-earthen ramp, but, surprisingly, found no resistance. Instead, they found hundreds of Jews &mdash; men, women and children &mdash; dead. They had committed suicide rather than be conquered by the Romans.

Today, it&rsquo;s tourists and pilgrims who make the journey up the mountain to Masada. There are two ways to get up to the fortress: by following a winding footpath or by hitching a ride with the modern convenience of a cable car.

At the top is a wealth of artifacts and ruins, including small stones inscribed with a single name that archaeologists speculate were used to draw lots in the Jews&rsquo; suicide pact. Visitors can view remnants of mosaics and frescoes and stroll around ruins of a bathhouse and synagogue. It&rsquo;s like walking around a ghost town that refuses to allow the modern world to forget the historic events that happened here.

In spite of, or because of, its tragic legacy, Masada draws tens of thousands of visitors each year. Among them are new Israeli soldiers, who vow during their oath of enlistment that &ldquo;Masada shall not fall again.&rdquo;