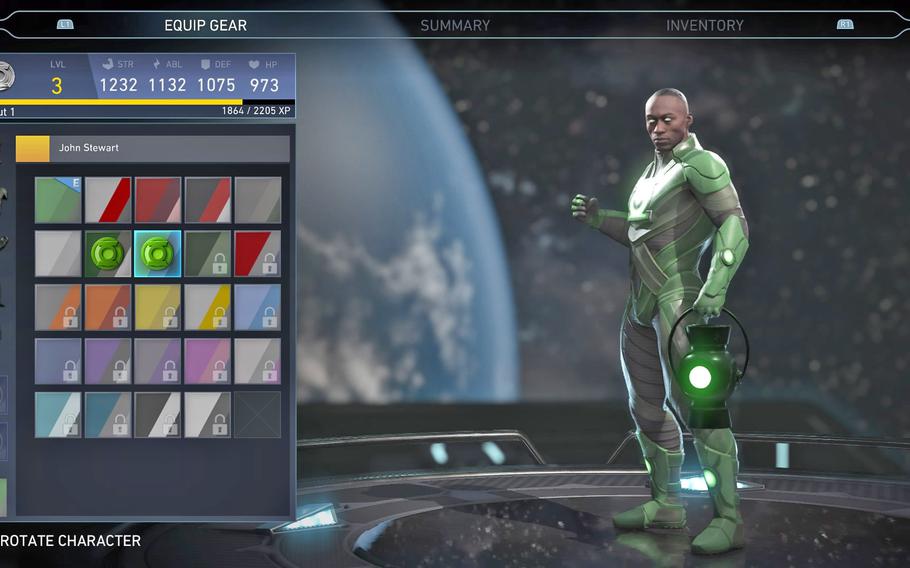 Tons of unlockable customization options ensures “Injustice 2” has plenty of content outside the core fighting. ()

Tons of unlockable customization options ensures “Injustice 2” has plenty of content outside the core fighting. () 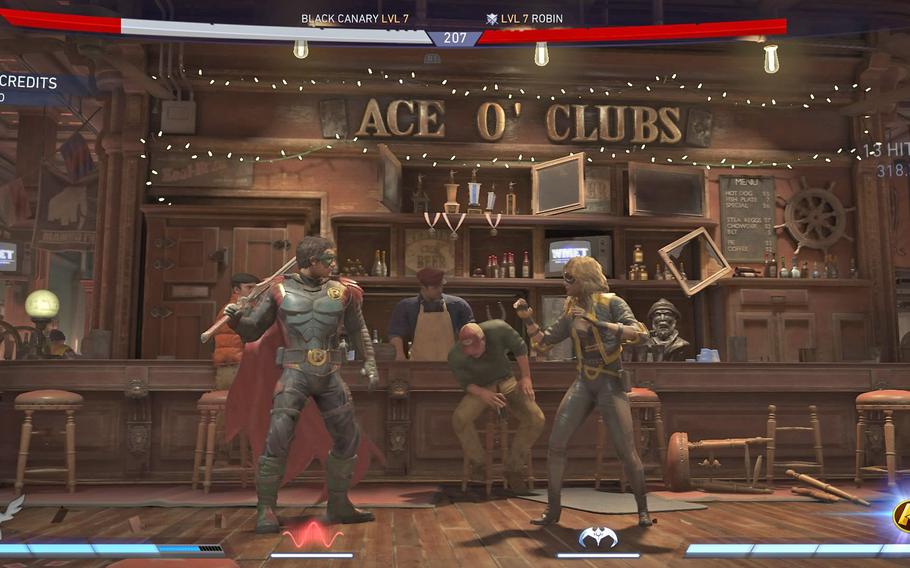 “Injustice 2” expands on the cast of characters found in the first, already expansive title. () 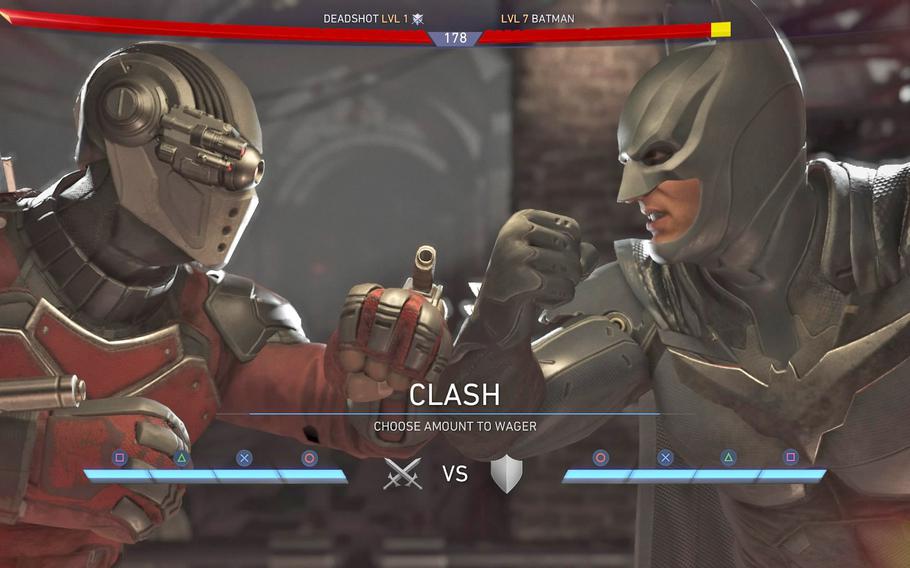 The controversial clash mechanic is back in the sequel to 2013’s “Injustice: Gods Among Us.” () 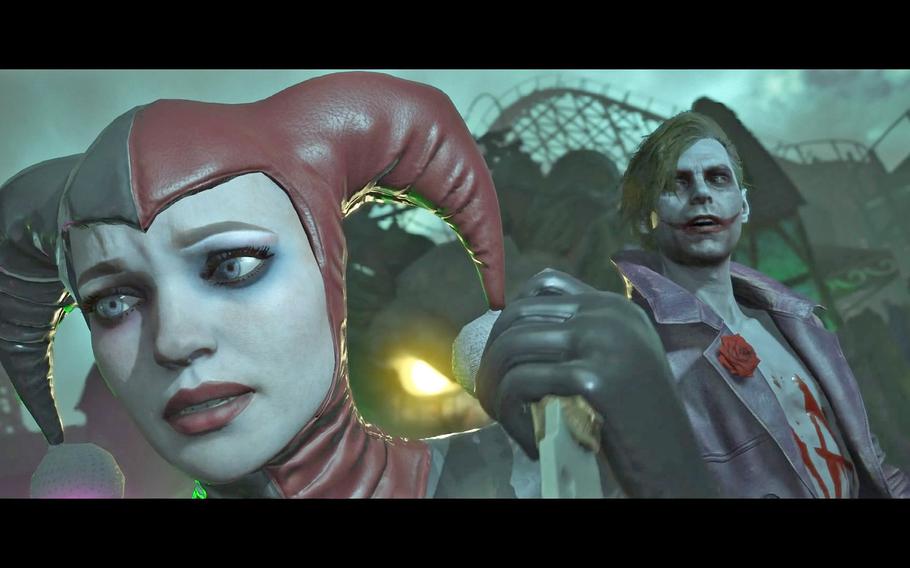 The story mode in “Injustice 2” is packed with cameos and other bits of fanservice that is sure to keep comic fans happy. () 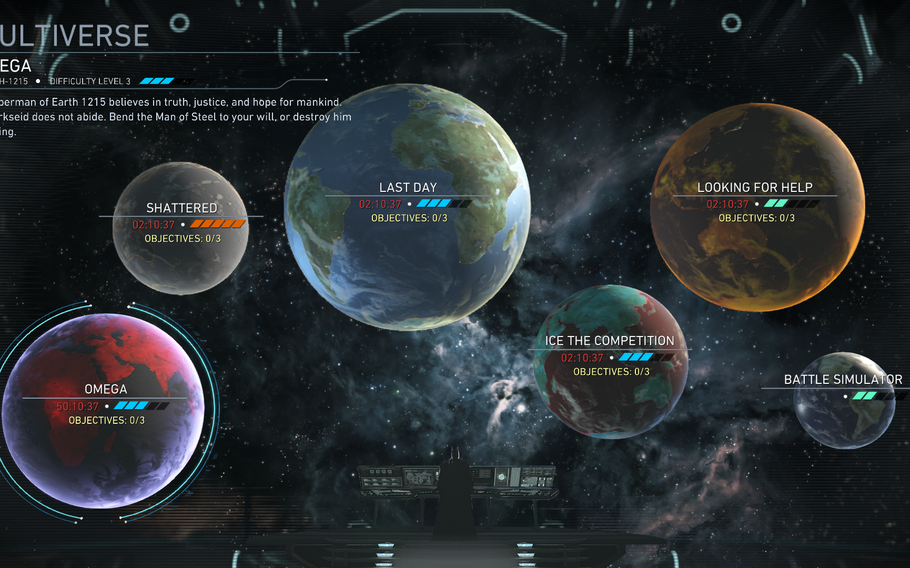 The multiverse single-player mode offers a series of challenges that refresh over time, offering up a nearly limitless amount of entertainment. ()

For many years, the fighting game genre was pretty clearly defined by two distinct philosophies. On one hand, there was the anime-based, fluid “Street Fighter” and its clones. On the other, much bloodier hand, there was the motion-captured grit of “Mortal Kombat” and its acolytes.

That divide, with its roots in the arcade scene of the ’90s, continues on to this day, even as its battleground and warring ideologies have changed with the times.

Arcades are dead, but Capcom keeps their competitive nature alive with “Street Fighter” and its stable of fighters aimed at providing fodder for fighting game communities and its tournament scene.

While games like “Street Fighter V” and “Marvel vs. Capcom” retain a healthy casual following, they’re primarily aimed at competitive multiplayer gaming. Not everybody enjoys having to learn 87 hit combos or the nuances of frame data in order to compete, though.

That’s where NetherRealms Studios comes in.

The “Mortal Kombat” developer has diverged even further from Capcom’s fighting philosophy than it had in the past by making its two flagship titles, the aforementioned “Kombat” and the superhero-infused “Injustice,” casual-friendly, single-player extravaganzas.

“Injustice 2” is the follow-up to the studio’s 2013 smash hit “Injustice: Gods Among Us,” a game that threw some of DC Comics’ best-known characters into a world in which Superman, once a paragon of honor and virtue, becomes a despot. That game focused heavily on casual and single-player appeal, offering a plethora of local ladder modes and unlockables.

Its recently-released sequel revisits that world — and its focus — but takes the single-player content and ramps it up to 11. Story modes, eternal single-player challenges, tons of unlockable content — the game is a casual gamer’s paradise.

The excellent story mode from the first title returns, with even better animations (the facial animations in the cutscenes are some of the best in the business) and a plot that picks up where the last game left off. The villainous Superman has been imprisoned, but a world-ending threat has arrived, leaving Batman and his supporters having to choose between setting him free or watching the world burn.

The story mode is excellent, though a bit short. I finished it in two short sessions. Thankfully, that mode is just the tip of the iceberg. The meat of the single-player game revolves around the multiverse, an endlessly-refreshing series of challenging ladder matches that also houses a proper arcade mode within.

Before tackling those, you’ll have to pick a fighter from the more than 20 brawlers available. There are some deep cuts, too. Alongside obvious inclusions like Batman and Harley Quinn, you can choose from Swamp Thing and comic book fan-favorites like Atrocitus and Blue Beetle.

Each of the characters feels like a love letter written by — and to — comic fans. When the fighters enter the stage, they’ll hold conversations that might only make sense to a comic fan, some of the costumes are ripped straight from floppy pages and the cameos during the story mode are impressive in their adherence to comic lore.

Sure, there is some amount of hand-waving in how Catwoman can go toe-to-toe with Darkseid, but the sheer amount of fan service packed into each character will appease even the more hardcore lore nerd.

Once your character is settled on, the multiverse offers up what seems to be an actually endless series of events, most of which expire and refresh. There are basic challenges, like clearing five enemies in a row, while others provide extra challenges like a tilting screen or winds that blow your fighter around.

Happily, losing doesn’t have quite the sting it used to, thanks to the other hook that will keep players occupied for years to come.

Characters gain experience points and loot, even when losing a match. The loot comes in the form of wearable items that changes not only the look of a character, but also their stats and even playstyle.

The loot crates, or “Mother Boxes,” are earned through completing challenges. There are bronze, silver, gold, platinum and diamond-tier boxes, each providing more loot than what can be found in the previous tier. Individual items, such as a defense-increasing choker for Black Canary, or a shiny new pair of Bat-pants, will drop after some fights — win or lose.

The gear is based on character level, so you’ll have to earn the right to wear the best gear. If you find an item that has terrible stats, but looks too sexy to give up, you can replace its stats with that of another similar item.

The loot crates and item drops give this game legs that I can’t see ever really exhausting. With dozens of hours and hundreds of fights under my belt, I’ve barely scratched the surface of the available items.

Increasing one character to level 20 — the level in which the best gear is made available — takes a concerted effort. Doing the same for 28 other characters — with more coming with already-announced downloadable content — is going to take some time.

A cynical gamer might take exception that some loot can also be purchased with a premium currency called “Source Crystals.” I’m sensitive to this, myself, as I hate microtransactions, especially in full-priced games like this. That being said, that currency can be used only for cosmetic items, so its easily ignored. Some amount of it can also be earned in the game.

I do have one serious complaint about the way the DLC character Darkseid is handled. I enjoyed “Gods Among Us” immensely, so I opted to support NetherRealms by paying for the ultimate edition. Big mistake.

The $100 I spent on the supposed ultimate edition still wasn’t enough to unlock what appears to be one of the better characters in the game. To get Darkseid, I’d have to pay an extra six bucks, even though he’s already in the game. No thanks. That is what I consider the lone black spot in an otherwise flawless content offering.

Of course, all the content in the world doesn’t matter if the core game isn’t enjoyable. “Injustice 2” is exactly that — enjoyable. The basic feel is the same as with any NetherRealm game, with the “Kombat” style dial-a-combo returning. But the fluidity of each match has never been better.

The chunkiness inherent in the motion-capture style of animation is all but gone here, and the sheer variety of combos gives players plenty of offensive capabilities. Combos chain together somewhat logically and no one character feels terrible, a rarity for fighting games.

The best addition to the overall fisticuffs is the amount of defensive options available.

By expending meter, players can escape from air juggles, break away from combos and even interrupt special attacks. This gives newer players at least an out to a never-ending combo, but also provides experienced fighters a great set of tools.

The online netcode seems solid enough. I never once had trouble finding an opponent or had any difficulty with lags or drops. Rage quitting is also handled nicely, with the offending player getting a nice shiny “L” for his poor sportsmanship.

If you’re a fighting game fan, casual or serious, “Injustice 2” is worth picking up. If, like me, you’re still bemoaning the loss of single-player content in modern brawlers, or if you’re away from a steady internet connection and need offline content, this game has you covered.

It’s also an absolute blast to play. Thanks to that and its sheer amount of content, “Injustice 2” gets my highest recommendation. Just don’t splurge for the pricier versions.