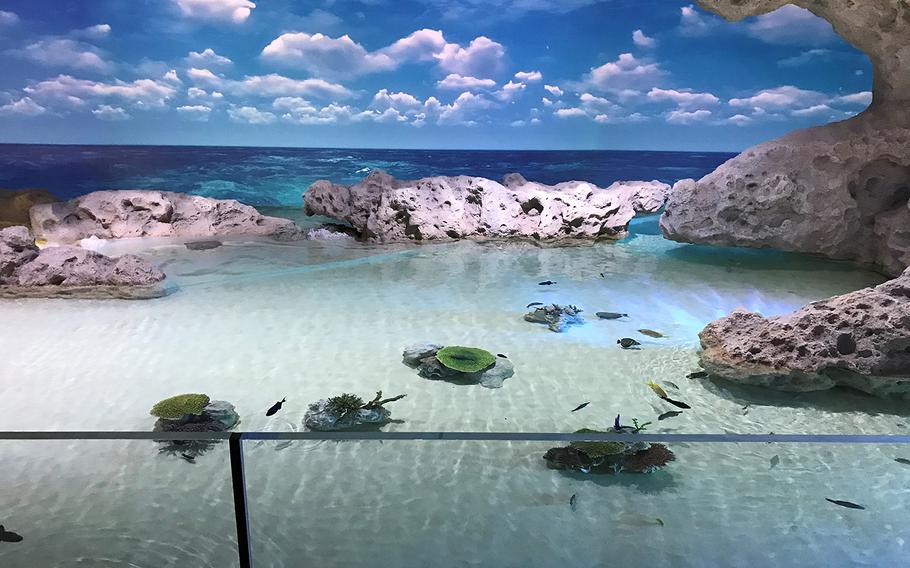 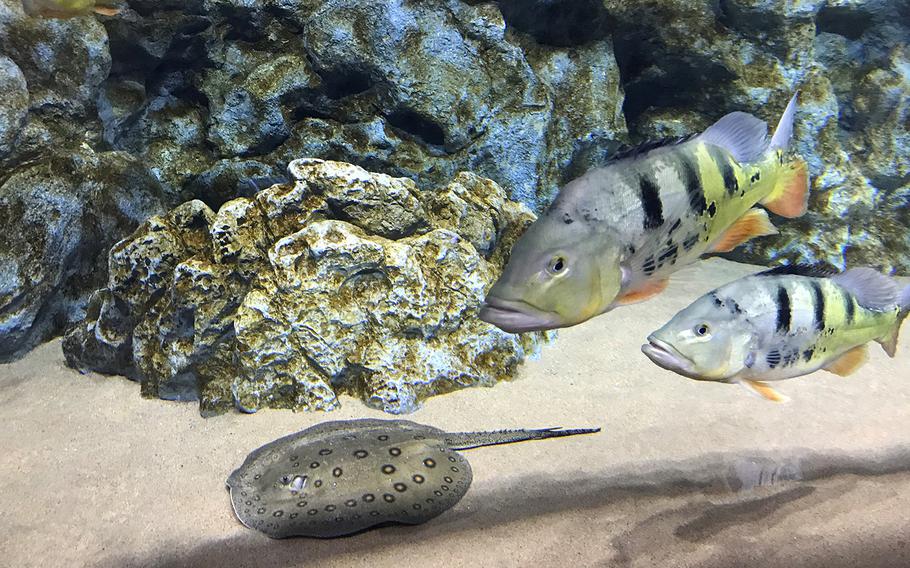 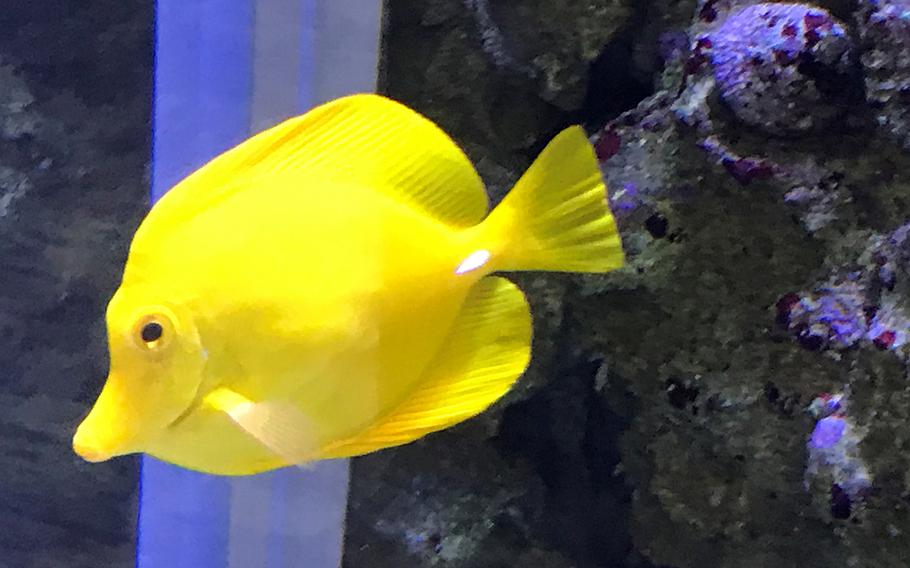 Buy Photo
Walk above or through an Okinawa reef at the brand new DMM Kariyushi Aquarium, located in the new Iias Okinawa Toyosaki mall in southern Okinawa, seen here on Sept. 26, 2020. (Matthew M. Burke/Stars and Stripes) 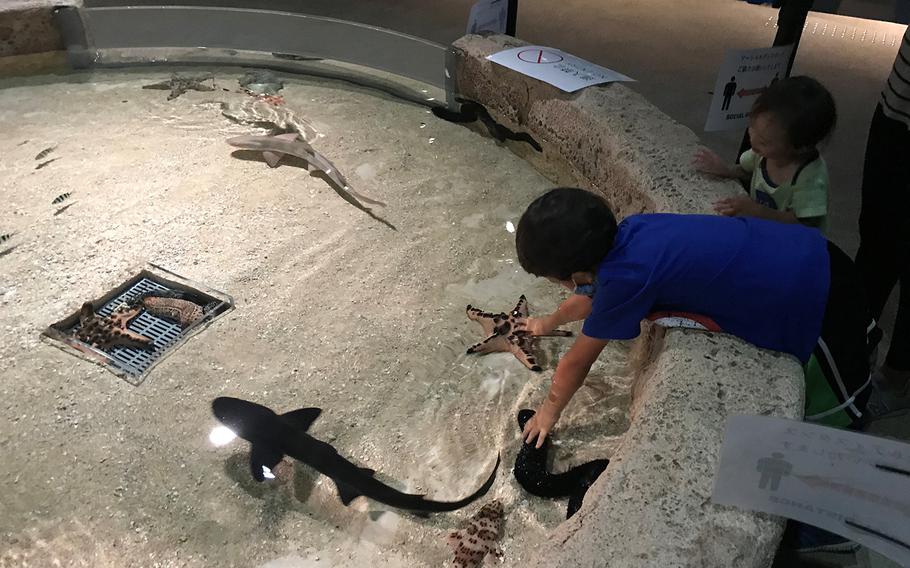 Buy Photo
Kids can have a hands on experience at the brand new DMM Kariyushi Aquarium, located in the new Iias Okinawa Toyosaki mall in southern Okinawa, seen here on Sept. 26, 2020. (Matthew M. Burke/Stars and Stripes)

Editor's note: High-density indoor and outdoor tourist attractions where social distancing is not possible are currently off-limits for Marines on Okinawa, and airmen from Kadena Air Base are barred from visiting aquariums, specifically, due to the ongoing coronavirus pandemic. Service members should check with their commands to make sure a visit to this location is authorized before planning a trip.

Opening a competitor aquarium on an island the size of Tokyo when the first is world renowned is a pretty bold move.

The DMM Kariyushi Aquarium in the new Iias Okinawa Toyosaki mall in southern Okinawa offers a completely different experience, focused less on scientific discovery and more on technology and entertainment. It provides visitors with a quality, alternative, natural experience on the opposite side of the island.

DMM Kariyushi Aquarium was built by Japan-based DMM Resorts Co. Ltd., according to its website. It was scheduled to open in April but was delayed until May 25 due to coronavirus shutdowns.

DMM projected more than 2 million visitors in its first year, a statement on its website from February said.

Everything in DMM Kariyushi feels futuristic, from the bright white ticketing area resembling the Star Wars ship Tantive IV to 60 shaped and well-lit water tanks holding 190 species to the cellphone app that guides and explains the aquarium's attractions from the palm of your hand.

Upon entering, visitors are corralled into an empty room with a wrap-around screen. An introductory film covers all of Okinawa, from the sea to the air and tourist attractions in between. The motion tricks your stomach into jumping several times.

Fans blow air on your face to coincide with the wind and mist tickles your nose as you soar through the clouds, temporarily transporting you to another place and time.

A door opens, leading visitors into a dimly lit "Emerald Forest." The habitat is covered in vines and plants.

On a day in late September, tanks featured goldfish, rainbowfish and catfish to name a few. There were caiman and Chinese water dragons, corn snakes and poison dart frogs.

A wooden trail takes you up into the trees so you can look down at the exhibits.

Real animals were apparently not enough for DMM Kariyushi. Peering through the grass and foliage revealed realistic boars and their young projected along the walls, darting back and forth. The sounds of the jungle added to the multi-sensory experience.

Visitors passed ocellate river stingrays and swimming Humboldt penguins, which are native to South America, on their way to a simulation of an Okinawa beach, complete with coral rock formations, tidal pools teeming with tropical fish, pennant coral fish, sailfin tangs, porcupine fish and red stingrays. Waves lazily lapped at the shore; boats passed by. A storm struck. It all felt real.

Next, visitors got to walk on water. Well, not in the biblical sense. After taking off their shoes they were prompted to walk out onto a thick glass aquarium window over a 20-foot-deep tank. The fish swam underneath as their guests looked down in amazement.

There were charismatic Asian small-clawed otters diving for fish thrown by smiling handlers. There was a pool with sea stars, sea cucumbers and various small sharks, like the blackspotted catshark, kids could touch. Staff supervised closely the entire time.

There were dozens more tanks downstairs in an area called "Ocean Beauty," where visitors were now face to face with fish they had been previously standing above. There were spotted morays, blacktip reef sharks, spotted eagle rays and green turtles.

Patrons could even traverse a tunnel passing through a tank and schools of fish, so they were visible on all sides.

A separate mirrored room with jellyfish floating in tubular tanks to the ceiling, lit by changing colored lights was very "Fear and Loathing in Las Vegas" meets "Doctor Who," a highlight of the experience.

A deep-ocean experience was provided by screens mounted on the wall with real water trickling in front. From what felt like the perspective of a small submarine's windows, a giant octopus attacked.

Exiting through the forest once more, visitors passed two-toed sloths, capybaras and six-banded armadillos being fawned over by attentive staff in small, temporary holding areas. It's tough to see animals in captivity, especially in a mall, but the staff seemed passionate and attentive.

DMM Kariyushi Aquarium cannot compare to Okinawa Churaumi Aquarium so it doesn't try to; instead, it tries to be something altogether different. That is where they succeed.

The aquarium offers an alternative natural experience that is equally fun and entertaining for children and families.

Food: A cafe onsite offers snacks and drinks, including Okinawa staples like purple mixed sweet potato fries for 400 yen, an Agu pork hot dog for 560 yen and smoothies for 500 yen.