MRES: it could be worse (and it was) 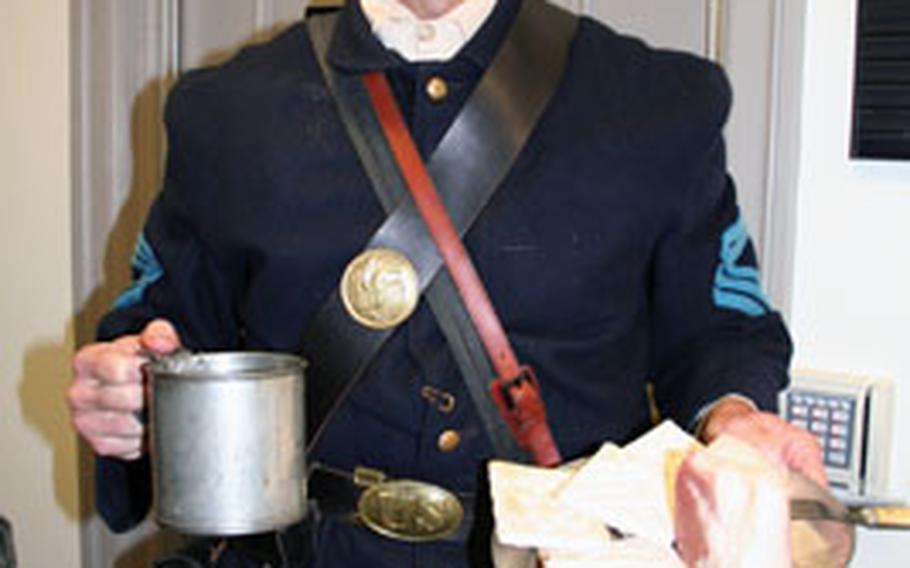 Greg Hampton, a professor at the Army Management Staff College at Fort Belvoir, Va., and a Civil War re-enactor, offers a typical day’s field diet for a Union Army soldier — coffee, salt pork and hardtack — during a recent Army-sponsored demonstration on combat feeding at the Pentagon. (Lisa Burgess / S&S)

Greg Hampton, a professor at the Army Management Staff College at Fort Belvoir, Va., and a Civil War re-enactor, offers a typical day’s field diet for a Union Army soldier — coffee, salt pork and hardtack — during a recent Army-sponsored demonstration on combat feeding at the Pentagon. (Lisa Burgess / S&S) Retired Army Staff Sgt. William Kelley, 86, a veteran of World War II and the Korean War, said MREs “are a big improvement” over the combat rations he ate during his 20-year military service. (Lisa Burgess / S&S) 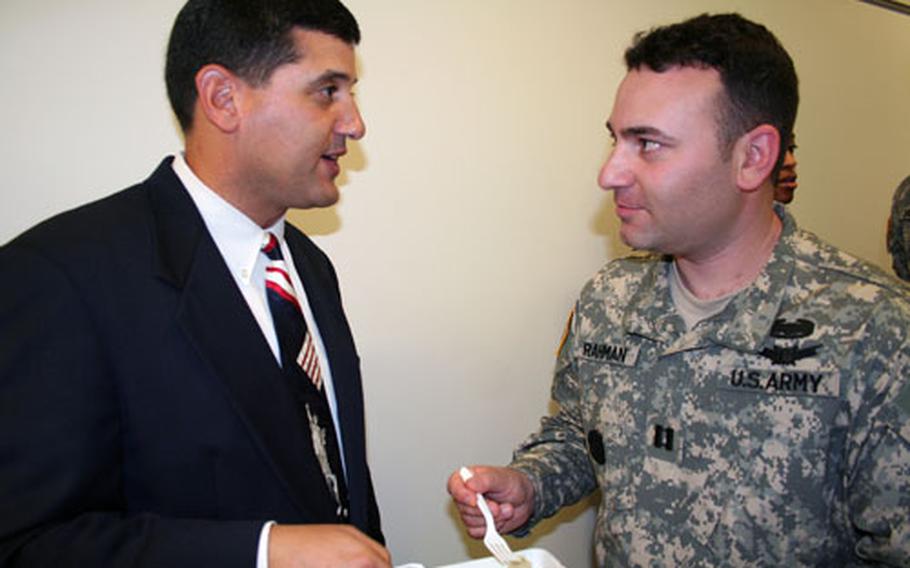 Cousins Butch, left, and Eric Rahman sample the newest MRE menus foods at the Pentagon. The pair, who grew up together in Natick, Mass., were informal taste testers for MRE prototypes developed by Butch’s father, Abdul Rahman. (Lisa Burgess / S&S)

Today&#8217;s troops are digging into rations their historic brothers in arms could only fantasize about.

The credit for delicacies such as fajitas and pasta making their way into U.S. military rations is largely owed to one man, combat feeding experts say: Abdul Rahman.

For more than 18 years, Rahman worked at the Army&#8217;s Soldier Research Development and Engineering Center to develop techniques in food preservation and packaging.

But Rahman&#8217;s nephew, Army Capt. Eric Rahman, 34, a signal officer and veteran of both Iraq and Afghanistan, said that not all his uncle&#8217;s prototypes were home runs.

Rahman grew up next door to his uncle in Natick, Mass., where the professor worked for the Defense Department&#8217;s Combat Feeding Program.

The Union Army soldier&#8217;s field ration consisted of a whopping total of three elements: salt pork, which is similar to bacon; rock-hard bread made of wheat flour, water, and a little salt, also known as &#8220;hardtack&#8221;; and gritty coffee &#8212; with a little sugar, if he was lucky.

This limited menu was served up three times a day, day after day, according to Greg Hampton, a professor at the Army Management Staff College at Fort Belvoir, Md.

Just as troops do today with their MREs, Civil War troops tried to get as creative as possible with the limited materials at hand, said Hampton, who has been a Civil War re-enactor for 15 years.

For example, he said, they would mash some hardtack with fat from the pork into a paste called &#8220;shulse,&#8221; wrap it around their rifle ramrods or bayonets, and roast the mess over a campfire &#8220;to make sort of a baguette,&#8221; he said.

But options were limited, particularly if the designated cook in the group was too lazy to fry the salt pork, and decided to throw everyone&#8217;s rations into a communal pot, Hampton said.

Most of salt pork is pure fat, which turns into a grey, smelly, gelatinous mess when it&#8217;s boiled &#8212; in short, almost inedible &#8212; and a major morale killer when plopped on a tin plate three times a day.

Every war has its version of salt pork and hardtack: foods that show up so often, troops vow they will never eat them again.

Kelley, 86, first saw combat during World War II with the 103rd Infantry Division in the Vosges Mountains of France, and later fought in Korea.

During the harsh winter of 1944, Kelley and his buddies had more than their share of Spam, he said.