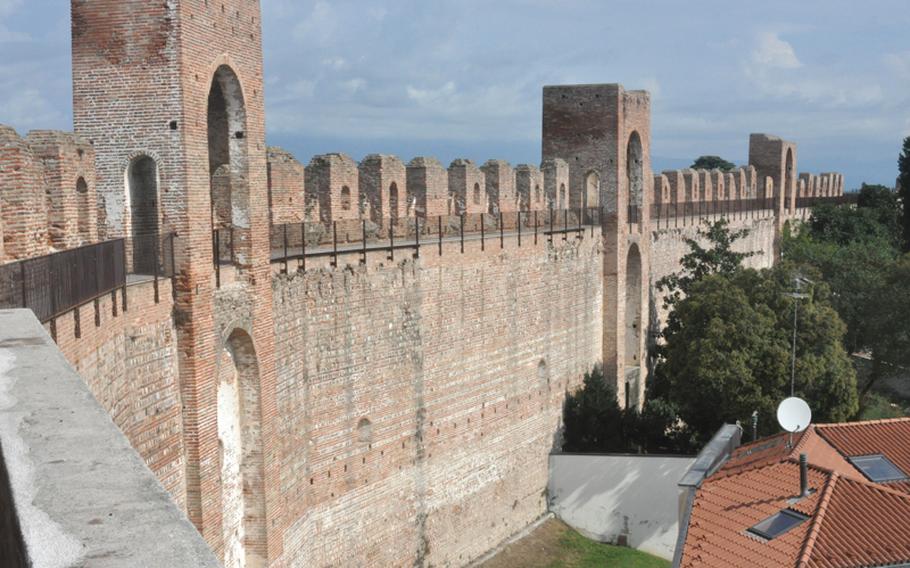 Cittadella, a city of about 20,000 people north of Padua, is known for its city walls. There has been some kind of fortification in place since Roman times. The current walls, more than 40 feet high, encircle the oldest part of the city. (Kent Harris/Stars and Stripes)

Cittadella, a city of about 20,000 people north of Padua, is known for its city walls. There has been some kind of fortification in place since Roman times. The current walls, more than 40 feet high, encircle the oldest part of the city. (Kent Harris/Stars and Stripes) 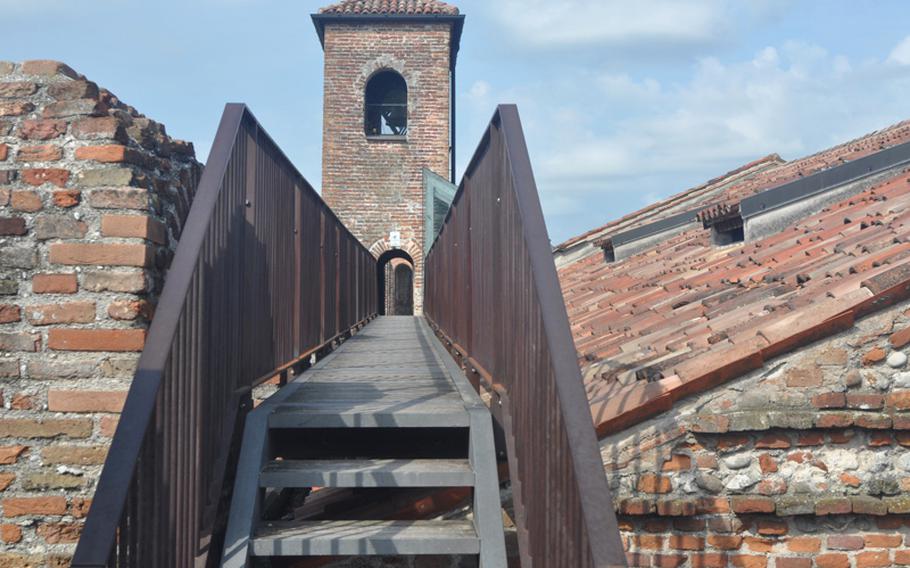 Feel like getting above it all? It&#39;s possible to take a walk around half the city walls in Cittadella -- well above most roof tops and just about even with this one that tops a four-story structure. There&#39;s a railing along the entire way, but those with fears of heights should probably skip the walk. (Kent Harris/Stars and Stripes) 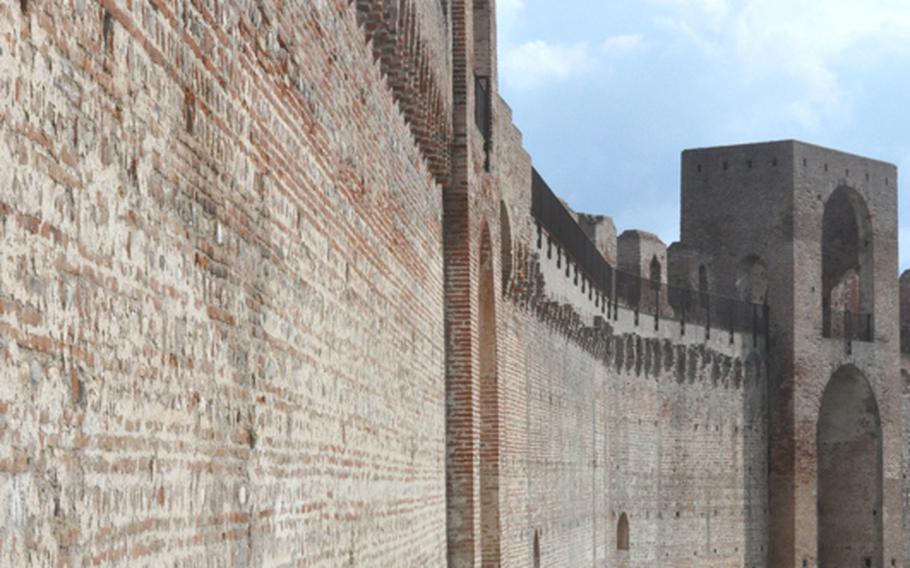 If you want to stump a local with a question, trying asking how many bricks there are in the walls surrounding the oldest parts of Cittadella, Italy. (Kent Harris/Stars and Stripes) 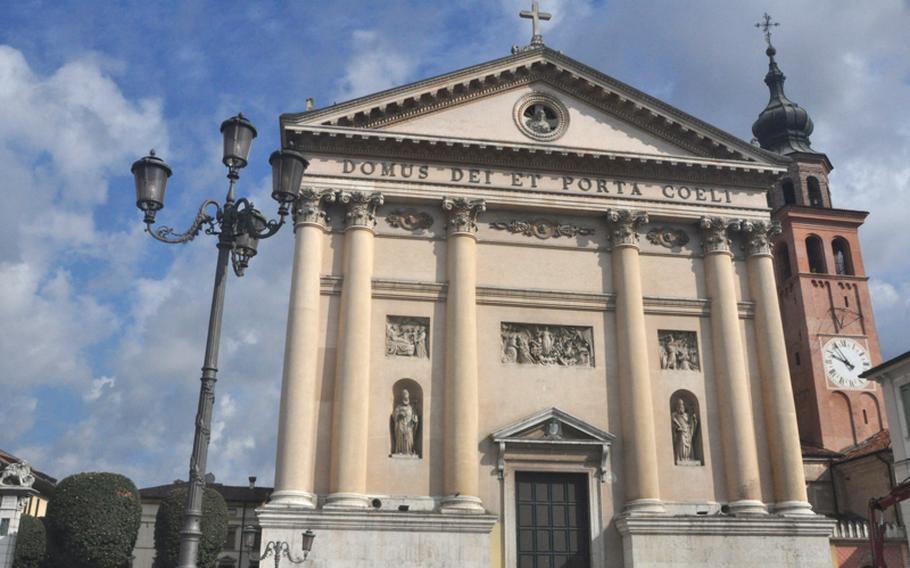 Just like most buildings in Cittadella, Italy, the cathedral is composed mainly of red bricks. But the facade that faces Piazza Perobon -- the main square -- hides that well. (Kent Harris/Stars and Stripes) 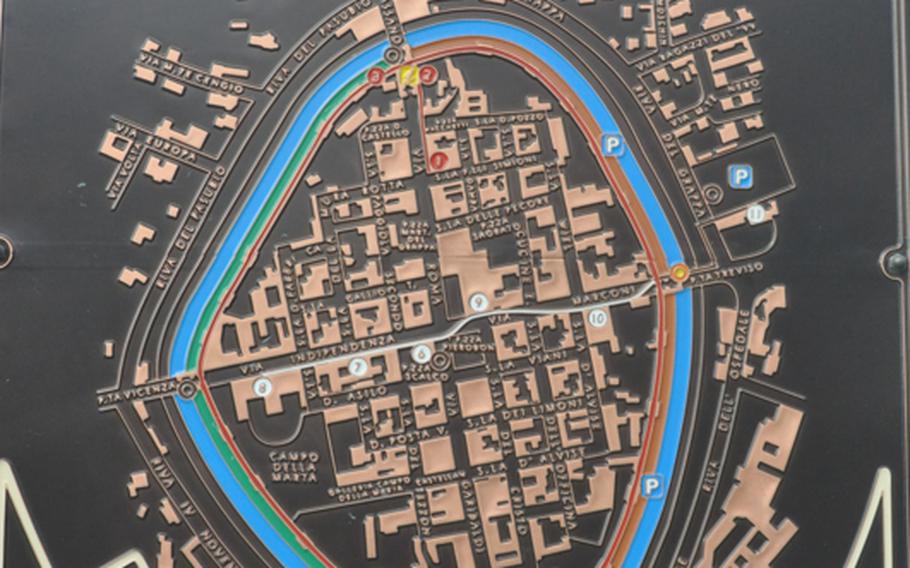 Cittadella isn&#39;t one of those Italian cities where it&#39;s easy to get lost. The part of the city that interests tourists is completely enclosed by city walls and a moat. And it only takes a few minutes to walk from one end to the other. (Kent Harris/Stars and Stripes)

A census taker would find about 400 people living inside the walls that surround the oldest part of Cittadella, Italy, a city of 20,000 that dates back to the Bronze Age.

But that same census worker would need a lot of help to count all the red bricks in the same area.

Historic Cittadella is surrounded by city walls that contain millions of bricks, most made of clay taken from the local area. The current walls can be traced to the 13th century when officials in Padua, concerned with the fortifications erected by rival city-state Treviso at Castelfranco a few kilometers from Cittadella, started placing bricks in roughly the same area where wooden palisades and dirt dikes once stood.

According to Barbara Frey, a local guide who works at the city&rsquo;s tourist office, there is evidence of people living at the site of the city as far back as the Bronze Age, some 5,000 years ago. The Romans later built up the area in part to protect a key junction of two important roads just northeast of the city. Some of the bricks in the wall are thought to date back to Roman times.

It&rsquo;s not hard to see where the old part of town starts and stops, as it is with some Italian cities. The city core is surrounded by a moat. To get inside the old city, visitors must first cross the moat and then pass through one of four gates in the walls: Porte Trevisane to the east, Porte Bassanesi to the north, Porte Vicentine to the west and Porte Padova to the south. It&rsquo;s no coincidence that the gates mirror the name of the largest city in that direction.

Visitors can walk along the western half of the walls by buying tickets at the city tourist office at the north tower complex. Those who fear heights or are wearing shoes that could affect their balance are advised to stay on the ground: Much of the walk is about 40 feet above ground level and parts are uneven.

Those who do go on top of the walls will see sweeping views inside the city. It&rsquo;s small enough that the rest of the walls can be seen as well. The views past the moat aren&rsquo;t as dramatic, though parts of the Dolomite mountain range are visible on most days.

Visitors who aren&rsquo;t interested in walking walls can check out the city&rsquo;s cathedral, built between 1774 and 1826. It, too, is made mostly of red bricks, though the fa&ccedil;ade and interior are heavily plastered and hide that fact. The cathedral faces Piazza Pierobon, the city&rsquo;s main square, where local events are held throughout the year.

The interior of the cathedral is somewhat plain by Italian standards, with only a dozen statues and half as many paintings interrupting the expanse of white plaster along the walls. The ceiling awaits the efforts of a modern-day Michelangelo.

Cittadella also has a few fine old mansions in the city core, intermixed with more modern shops and homes.

Since it&rsquo;s such a short trip from Vicenza, it might make sense to visit other nearby cities, such as Castelfranco, Bassano del Grappa or even Padua, in a day trip.

Directions: Cittadella is about 20 miles northwest of Padua. From Vicenza, it&rsquo;s about a 15-mile ride along the sometimes-congested SR-53. From Aviano, exit the A4 autostrada at Padova-Ovest and take SP-47 toward Cittadella and Trento. There is some parking inside the city walls, but much is reserved for locals. Parking in or out of the walls in a blue-lined space requires a ticket. All the roads inside the city core are one way.

Many shops and the city&rsquo;s cathedral are closed during lunch hours.

Costs: It costs 4 euros for adults and 2 euros for those older than 65 or younger than 17 to walk the walls. Entrance to the city and the cathedral are free. Those interested in arranging tours of the historical city center can do so by calling ahead. A guide costs 35 euros for a group of up to 25 people (walking the walls costs an additional 2 euros per person).

Food: Cittadella&rsquo;s specialty is Pollenta di Cittadella. This isn&rsquo;t served as part of a meal, but as a dessert. It&rsquo;s similar to cornbread in the States and topped with powdered sugar. There are numerous restaurants and a few grocery stores inside the city walls.

Information: The city&rsquo;s tourist office is in the north gate (Porte Bassanesi). It serves as the entrance/exit for those interested in walking the walls and is the place to buy the tickets. Free maps of the city and brochures containing some history and sights are available for 1 or 2 euros. For more details, see the website comune.cittadella.pd.it, e-mail turismo@comune.cittadella.pd.it or call 049-9404485. Staff members speak English.