Between Blood Road and German culture stands the barbarism of Buchenwald 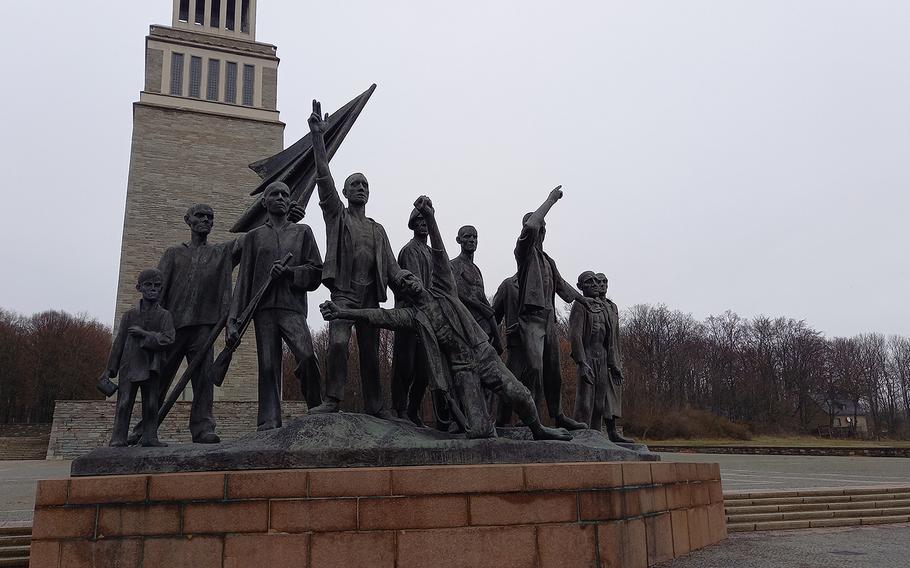 The Bell Tower is part of the memorial the East German government built at the Buchenwald site. In front of it, a bronze statue by Fritz Cremer, called "Revolt of the Prisoners," has become one of the focal points of the site. (Marcus Kloeckner/Stars and Stripes)

The Bell Tower is part of the memorial the East German government built at the Buchenwald site. In front of it, a bronze statue by Fritz Cremer, called "Revolt of the Prisoners," has become one of the focal points of the site. (Marcus Kloeckner/Stars and Stripes) One of the three mass graves at Buchenwald, Germany. The graves are focal points in the memorial site built at the former Nazi camp by the East German government. (Marcus Kloeckner/Stars and Stripes) One of the 11 figures depicted in “Revolt of the Prisoners,” a statue by sculptor Fritz Cremer that stands in front of the bell tower at the Buchenwald memorial site, defiantly clenches his fist. (Marcus Kloeckner/Stars and Stripes)

“Blood Road,” says the gray sign alongside the road that leads to what was once Germany’s largest concentration camp, Buchenwald.

Just 4.5 miles from Weimar, a city known for German cultural icons like Johann Wolfgang von Goethe, philosopher Friedrich Nietzsche and composer Johann Sebastian Bach, and as the birthplace of German constitutional democracy in 1919, the Nazis established a camp at Buchenwald where cruelty and barbarism were part of daily life.

On a visit in December to the site on Ettersberg hill where the camp once stood, it was hard not to be moved by the stark contrast between the culture and history of Weimar and the monstrous crimes committed by Germans at Buchenwald — and by the Soviets after World War II, when the Iron Curtain fell on eastern Europe.

Around four hours from Kaiserslautern, or three hours from Grafenwoehr or Vilseck, the former camp was deserted during a recent visit in December. The visitor center was closed because of coronavirus restrictions, and guided tours were canceled. But outdoor sites, including the former inmates’ camp, the SS area and mass graves, are accessible daily until sundown, the camp’s website says.

The East Germans turned part of the camp into a memorial in 1958. “Its monumentality is intended to reflect the extent of the crimes, but it serves first and foremost as a national memorial,” focused on German Communist party members who resisted the Nazis, and many of whom died at Buchenwald.

Over the years, the memorial has been expanded to become the largest site in Germany commemorating those who died in the Nazi regime’s barbaric camps.

After the fall of communism and the reunification of Germany, more commemorative plaques and other markers were added at the former camp to remember victims other than German communists.

Among the additions was a stone honoring at least 169 allied airmen, nearly half of them American, who were shot down over France in 1944 and interred at the camp. Two of them died, and the rest were transferred to the Stalag Luft III prisoner of war camp in Poland. The stone memorializing them was dedicated on April 13, 2004, by survivors of Buchenwald, a little more than 59 years after the camp was liberated by the U.S. 3rd Army.

A bronze statue by Fritz Cremer, dedicated in 1958, stands in front of the bell tower. Called “Revolt of the Prisoners,” it depicts 11 figures, one holding up clenched fists and others making gestures that could be signs of victory.

With the visitor center closed, there was no information available about the statue, and looking online also shed no light on what Cremer intended it to depict. But it could be a commemoration of the group of prisoners who rose up against their Nazi guards as the U.S. 3rd Army neared the camp in April 1945. The prisoners were in radio contact with the approaching Army, and when the Americans got close enough, they attacked the guards, historical documents say.

Ohrdruf, a subcamp of Buchenwald, was the first part of the sprawling site to be liberated by the Americans, when the 89th Infantry Division overran it on April 4, 1945.

Two days later, knowing that American troops were approaching, the Nazi commander of the main camp put thousands of prisoners on trains or forced them to evacuate on foot in one of the death marches that took place across occupied Europe in the waning days of the war.

When the 3rd Army arrived at Buchenwald on April 11, the Nazis had “evacuated” some 28,000 prisoners, but 21,000 others, many in a pitiful state, had been left behind to die.

General Dwight D. Eisenhower, Supreme Commander of the Allied Forces in Europe, visited Ohrdruf a day after the liberation of the main camp. With him were Generals George S. Patton and Omar Bradley.

“The visual evidence and the verbal testimony of starvation, cruelty and bestiality were so overpowering as to leave me a bit sick,” Eisenhower, who became President after the war, said in a cable he sent to another general after the visit.

“I made the visit deliberately, in order to be in a position to give firsthand evidence of these things if ever, in the future, there develops a tendency to charge these allegations merely to ‘propaganda.’”

When then-President Barack Obama visited Buchenwald in 2009, he commented on the “irony about the beauty of the landscape and the horror that took place here.”

“For amidst the countless acts of cruelty that took place here, we know that there were many acts of courage and kindness as well,” he said.

Directions: To get to the memorial site, take exit 48 off the A4 Autobahn and head toward Weimar. Then follow signs to the Buchenwald Memorial, around 11 miles away. It’s about a 4-hour drive from Kaiserslautern, slightly less from bases in Bavaria. Budget around two hours for a visit when all facilities are open, less when you can only visit the outdoor parts.

Hours: Outdoor areas of the camp are accessible, free of charge, daily until sundown, but be careful not to violate German or military travel rules. The visitor center and museums will reopen to visitors once the coronavirus restrictions have been lifted. Their hours are available online at buchenwald.de/en/171

Food: Cafe Paul at the memorial is currently closed because of the pandemic. Its non-pandemic opening hours are posted on the website. There are multiple eating establishments in Weimar.

More information: Parts of the memorial are not recommended for young children. More information is available online in English at buchenwald.de/en/69