‘Spare’ but not stingy: takeaways from Prince Harry’s memoir 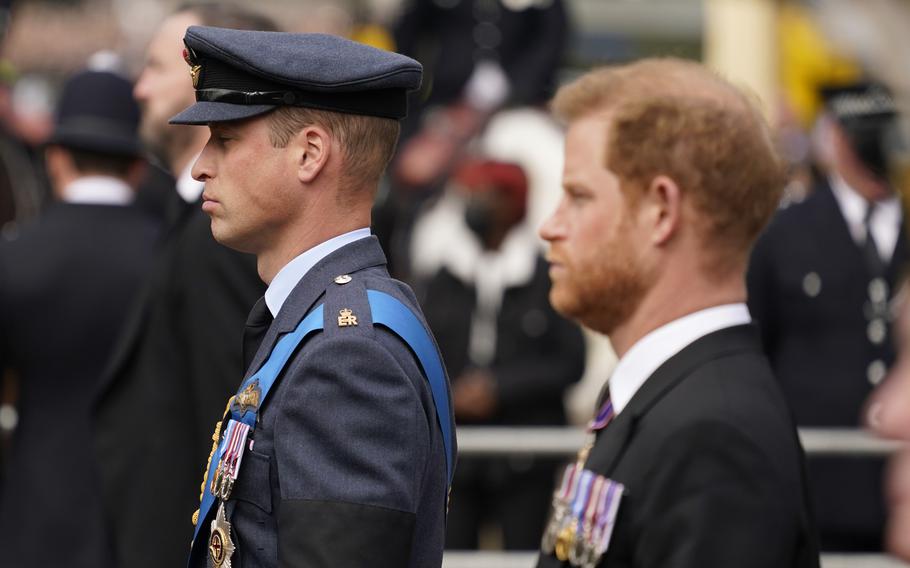 Prince William, center, and Prince Harry, right, walk behind the coffin of Queen Elizabeth II being pulled past Buckingham Palace following her funeral service at Westminster Abbey in central London, on Sept. 19, 2022. An explosive memoir reveals many facets of Prince Harry, from bereaved boy and troubled teen to wartime soldier and unhappy royal. From accounts of cocaine use and losing his virginity to raw family rifts, “Spare” exposes deeply personal details about Harry and the wider royal family. It is dominated by Harry’s rivalry with brother Prince William and the death of the boys’ mother, Princess Diana in 1997. (Alberto Pezzali/AP)

From the book's opening citation of William Faulkner, to Prince Harry's passionate bond with his wife Meghan, you could almost call the Duke of Sussex's memoir “The Americanization of Prince Harry."

Bereaved boy, troubled teen, wartime soldier, unhappy royal — many facets of Prince Harry are revealed in his explosive memoir, often in eyebrow-raising detail. Running throughout is Harry's desire to be a different kind of prince — the kind who talks about his feelings, eats fast food and otherwise doesn't hide beyond a prim facade.

From accounts of cocaine use and losing his virginity to raw family rifts, “Spare” exposes deeply personal details about Harry and the wider royal family. Even Americans may flinch when he confides that a trip to the North Pole left him with frostbitten genitals that proved most irritating during his brother's wedding to Kate. 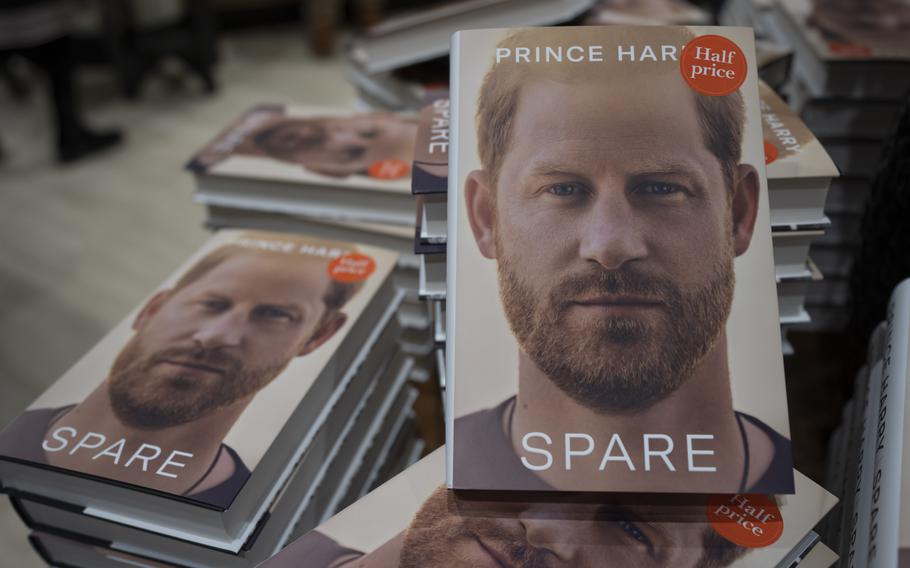 Copies of the new book by Prince Harry called “Spare” are displayed at a book store in London, Tuesday, Jan. 10, 2023. Prince Harry’s memoir “Spare” went on sale in bookstores on Tuesday, providing a varied portrait of the Duke of Sussex and the royal family. (Kin Cheung/AP)

The book opens with a famous quote from Faulkner, bard of the American South: “The past is never dead. It’s not even past.”

Harry’s story is dominated by his rivalry with elder brother Prince William and the death of the boys’ mother, Princess Diana, in 1997. Harry, who was 12 at the time, has never forgiven the media for Diana’s death in a car crash while being pursued by photographers.

The loss of his mother haunts the book, which Harry dedicates to Meghan, children Archie and Lili “and, of course, my mother.”

The opening chapter recounts how his father Prince Charles — now King Charles III — broke the news of his mother’s accident, but didn’t give his son a hug.

Harry reveals that years later he asked his driver to take him through the Pont de l’Alma tunnel in Paris, site of the fatal crash, hoping in vain that it would help end a “decade of unrelenting pain. He also says he once consulted a woman who claimed to have “powers” and to be able to pass on messages from Diana.

Harry adds that he and William both “pleaded” with their father not to marry his long-term paramour Camilla Parker-Bowles, worried she would become a “wicked stepmother.”

Harry also is tormented by his status as royal “spare” behind William, who is heir to the British throne. Harry recounts a longstanding sibling rivalry that worsened after Harry began a relationship with Meghan, the American actor whom he married in 2018.

He says that during an argument in 2019, William called Meghan “difficult” and “rude" (the kind of insults an upper class Englishman might reserve for Americans), then grabbed him by the collar and knocked him down. Harry suffered cuts and bruises from landing on a dog bowl.

Harry says Charles implored the brothers to make up, saying after the funeral of Prince Philip in 2021: “Please, boys — don’t make my final years a misery.”

Neither Buckingham Palace, which represents King Charles III, nor William’s Kensington Palace office has commented on any of the allegations. 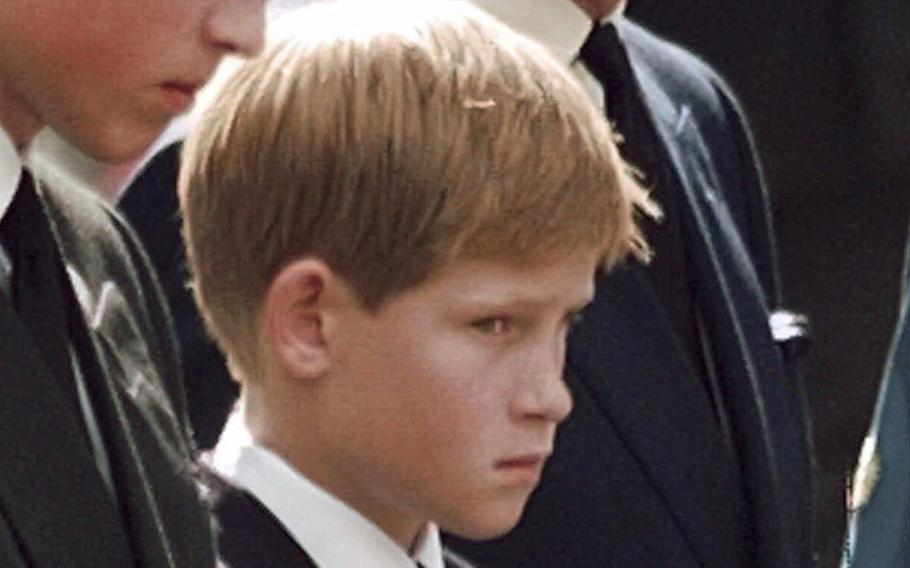 Britain’s Prince Charles, the Prince of Wales and his sons Prince William, left and Prince Harry wait for the coffin of Princess Diana to be loaded into a hearse outside of Westminster Abbey, in London on Sept. 6, 1997. An explosive memoir reveals many facets of Prince Harry, from bereaved boy and troubled teen to wartime soldier and unhappy royal. From accounts of cocaine use and losing his virginity to raw family rifts, “Spare” exposes deeply personal details about Harry and the wider royal family. It is dominated by Harry’s rivalry with brother Prince William and the death of the boys’ mother, Princess Diana in 1997. (AP)

Harry writes with admiration and some affection about Queen Elizabeth II and Prince Phillip. He remembers Phillip's “many passions — carriage driving, barbecuing, shooting, food beer," and above all how he “embraced life," as did his mother. “Maybe that was why he'd been such a fan" of Princess Diana, Harry recalls.

Meanwhile, he acknowledges being intimidated at times by his grandmother, if only because she was the Queen. She is no more helpful than anyone else in containing the media leaks, but she is often seen as sympathetic to his wishes, never more so than when she approved of his marriage of Meghan.

Harry also sees her as an engaging, even humorous person beyond her otherwise proper bearing. Reflecting on her death last year he remembers whispering jokes into her ear or convincing her to participate in a widely seen promotional video of the Invictus Games, in which she one-ups the Obamas in a sparring contest.

“She was a natural comedienne," he writes, calling her “wicked sense of humor" a prized confidence between the two. “In every photo of us, whenever we're exchanging a glance, making solid eye contact, it's clear. We had secrets."

The memoir suggests the media’s party-boy image of Harry during his teen and young adult years was well-deserved.

Harry describes how he lost his virginity at 17 — in a field behind a pub to an older woman who loved horses and treated the teenage prince like a “young stallion.” It was, he says, an “inglorious episode.”

He also says he took cocaine several times starting at the same age, in order to "feel different.” He also acknowledges using cannabis and magic mushrooms — which made him hallucinate that a toilet was talking to him.

Harry offers extensive memories of his decade in the British Army, serving twice in Afghanistan. He says that on his second tour, as an Apache helicopter co-pilot and gunner in 2012-2013, he killed 25 Taliban militants. Harry says he felt neither satisfaction nor shame about his actions, and in the heat of battle regarded enemy combatants as pieces being removed from a chessboard, “Bads taken away before they could kill Goods."

Veterans criticized the comments and said they could increase the security risk for Harry. Retired Col. Richard Kemp said it was “an error of judgment,” and regarding enemy fighters as chess pieces is “not the way the British Army trains people.”

“I think that sort of comment that doesn’t reflect reality is misleading and potentially valuable to those people who wish the British forces and British government harm,” he told the BBC.

The Taliban returned to power in Afghanistan in 2021, and Harry's words have drawn protests in the country. Afghan Foreign Ministry spokesman Abdul Qahar Balkhi called the Western invasion of Afghanistan “odious” and said Harry’s comments “are a microcosm of the trauma experienced by Afghans at the hands of occupation forces who murdered innocents without any accountability.”

Yes, he's a Prince, but he isn't above stopping by for burgers and fries at an In-N-Out, or getting clothes from a chain outlet. He's also a compulsive watcher of “Friends" and relates most to the wisecracking Chandler Bing, played by Matthew Perry. And because he's a prince, he got to meet another “Friends" star, Courteney Cox, and indulge in chocolate psychedelic mushrooms at her Los Angeles home. 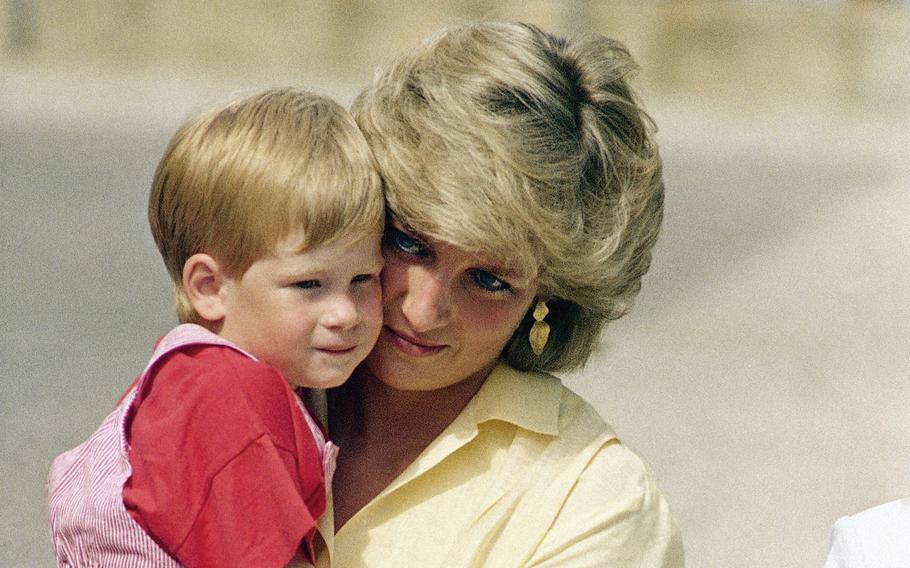 Diana, the Princess of Wales holds son Prince Harry while royal families posed for photographers at the Royal Palace, in Majorca, Spain, on Aug. 9, 1987. An explosive memoir reveals many facets of Prince Harry, from bereaved boy and troubled teen to wartime soldier and unhappy royal. From accounts of cocaine use and losing his virginity to raw family rifts, “Spare” exposes deeply personal details about Harry and the wider royal family. It is dominated by Harry’s rivalry with brother Prince William and the death of the boys’ mother, Princess Diana in 1997. (AP)

Harry shares painful words about his father and brother, but his real anger is directed at the British media, and at those within the royal circle who cooperated and otherwise stood aside. While Charles remains apparently indifferent to the press, the rest of the family is obsessed with media coverage, Harry writes, himself as much as any of them. He expresses despair over what he calls endlessly false stories about him, the racist caricatures of his wife and of the press' unnerving knowledge of his whereabouts and private correspondence. “One has to have a relationship with the press," he is told by the royal staff.

Harry credits Meghan with changing the way he sees the world and himself. He says he was “awash in isolation and privilege” and had no understanding of unconscious bias before he met her.

The young prince notoriously wore a Nazi uniform to a costume party in 2005, and claims in the book that William and his now-wife Kate encouraged the choice of outfit and “howled” with laughter when they saw it. He was recorded using a racist term about a fellow soldier of Pakistani descent in 2006, but says he did not know the word was a slur and that the soldier was not offended.

Meghan and Harry cited the U.K. media’s treatment of the biracial American actor as one of the main reasons for their decision to quit royal duties and move to the U.S. in 2020.

The book gives no sign that royal family relations will be repaired soon. Harry told ITV in an interview to promote the book that he wants reconciliation, but that there must be “accountability” first.

In the final pages, Harry describes how he and William walked side by side during the funeral procession of Queen Elizabeth II in September, but spoke barely a word to one another.

“The following afternoon, Meg and I left for America,” he says.