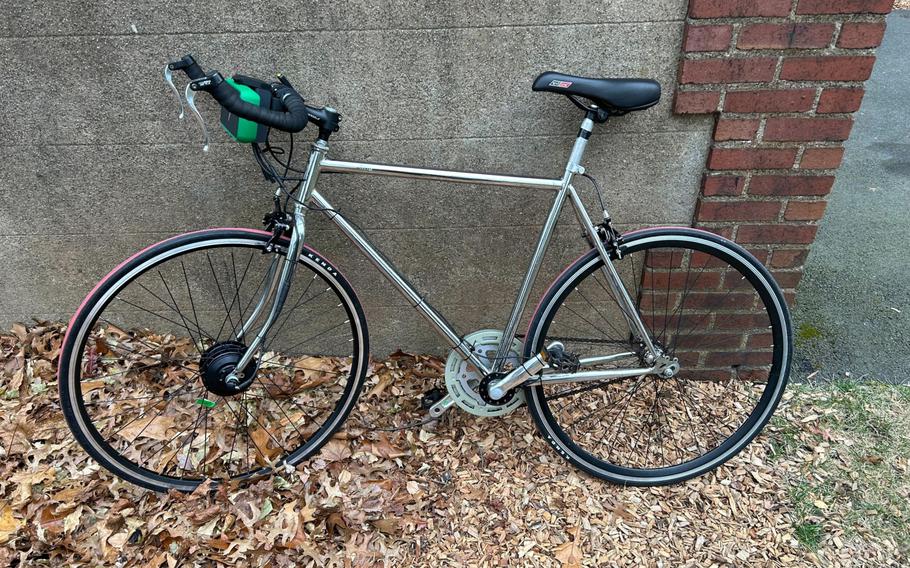 The author’s bicycle, post-conversion to an e-bike with a Swytch kit. The author said converting his bike only took about an hour. According to Swytch co-founder and CEO Oliver Montague, using a conversion kit is cheaper than buying an electric bike. (Ira Boudway/Bloomberg)

A decade ago, I bought a single-speed bicycle in New York City for about $300. I don’t remember the brand, and the frame’s lone decal has long since faded; when I moved to the suburbs a few years ago, the bike went into the garage for indefinite hibernation. But this October I wheeled it out with plans to execute an extreme makeover: Using a kit made by the London-based startup Swytch Bike, I would convert my rusty old bicycle into a motor-assisted electric ride.

Over the past few years, e-bikes have boomed in the U.S., driven by a pandemic spike in outdoor activities, a growing awareness of their utility as car-replacers and a maturing supply chain that’s driving down costs. The average price tag on a commuter e-bike is now around $2,600, and it’s possible to get a decent one for less than $1,000. But a decade ago, the e-bike was still mostly a curiosity, and roughly half the market was made of conversion kits, says Ed Benjamin, founder and chairman of the Light Electric Vehicle Association. For early adopters, upgrading an old bike was often cheaper and easier than buying a ready-built electric version.

“It used to be a big deal,” Benjamin said. “That hasn’t been the case now for probably 10 years because the complete bikes became such an attractive value.”

The mainstreaming of e-bikes has largely relegated conversion kits to niche status, where they appeal mostly to daredevils interested in building quasi-motorcycles. But 5-year-old Swytch is hoping to tap into a much wider market: anybody with a bicycle. Before its kits sold out this fall, they started at $500 for a 98-watt-hour battery version and ran to $800 for a 180Wh battery. The company pitches conversion kits as a way to join the e-bike boom with minimal disruption, cost or carbon footprint.

“It’s really easy to do,” Swytch co-founder and CEO Oliver Montague said during an interview in October. “And it’ll save you a lot of money.”

As an engineering student at Oxford University in 2012, Montague started a small business building and selling e-bikes and conversion kits online. Over time, he found himself stocking hundreds of different pieces of hardware made to work with different models and sizes of bikes.

“The problem that drove me to the first version of the Swytch kit prototype was just trying to simplify my online shop,” he said. In 2017, Montague co-founded Swytch with his now-wife Hayley, 40, and chief technology officer Dmitro Khroma, 27. The company sold the first version of its kit through a crowdfunding campaign later that year.

As of 2022, Swytch has raised about $6 million, mainly from angel investors. Montague says the company expects to ship around 30,000 units this year, with about 70 employees and a revenue of roughly $20 million.

After providing Swytch with some basic information about my bike (wheel size, fork type, etc.), the company sent me a box containing a motorized wheel, a battery and miscellaneous other hardware, along with instructions for mounting it all on my bike. Swytch sent me both the smaller battery, which weighs less than 2 pounds and is roughly the size of a fat smartphone, and the larger version, which weighs about a pound more and is closer to the size of a tablet.

Montague likes to say that anybody who can change a bicycle tire is qualified to use a Swytch kit, and his rule proved correct: I don’t have much practice changing tires and couldn’t quite complete the conversion solo. In trying to swap out the front wheel on my bike for Swytch’s motorized one, I punctured my inner tube and had to make a trip to a bike shop.

But other than that bit of help, I managed to install the kit on my own. I bolted on Swytch’s front wheel, which has a 250-watt motor in the hub; mounted the battery rack to my handlebars using a hex wrench; attached the stick-on pedal sensor to my bike’s frame; zip-tied the corresponding magnetic disc to one pedal crank; mounted the controller on the handlebars; attached all the wires to the battery mount and zip-tied them all along the bike’s frame.

Montague and Khroma then hopped on a video call to review my handiwork, something the typical customer can do with a Swytch customer service agent. The overall approach is low-key: Montague suggested I re-tie some of the wire along the frame so it wouldn’t catch on my pant legs, and commended my jerry-rigging of the ill-fitting display controller to sit loosely on top of my handlebars.

“It looks like you’ve done a pretty good job there,” he said. “I think the way you’ve done it is the way I would have done it myself.”

The setup took me about an hour, and while it’s not especially pretty, it is simple. Between the zip ties and plastic parts, it also feels temporary — something Montague describes as a feature and not a bug. Everything in the Swytch kit comes off and on easily, and nothing prevents the bike from being ridden without power from the motor.

“With full-on electric bikes, if the battery’s dead, you’re never going to ride that thing,” Montague said. “With a Swytch bike, if you take the battery off, it’s still a bike. It weighs the same, rides the same, handles the same.”

With the kit installed, riding my bike felt a lot like it did before — except a little easier and a little faster. The motor assistance can be set to five levels and only operates while you pedal. It also cuts out when the bike reaches 15 miles per hour, a limit that can be set to 20 mph on bikes in the U.S. As a riding experience, it was better than my bike without the motor, but not as good as e-bikes I’ve tried from Cowboy or Specialized.

In large part, the value proposition of the Swytch kit depends on the bike that’s being converted. If you already own a well-made bicycle, Swytch can probably give it an electric motor for less than you might spend on a high-quality e-bike. If your starter bike is just so-so, like mine, the kit will make it into a so-so e-bike, and you might be better off with one of the many purpose-built e-bikes on the market.

“If you buy a brand new electric bike because you think it’s a good thing for the environment, you’re initially offsetting a bunch of that benefit by making a new bike from scratch,” he says, “with lots of aluminum, lots of metal, lots of things that you shouldn’t have had to buy.”

There’s a little bit of truth to that: In its 2021 sustainability report, bike manufacturer Trek estimated that manufacturing one of its models emits the equivalent of 175 kilograms of carbon dioxide on average, roughly equal to the emissions from a single tank of gas in a Ford Explorer. But while avoiding the production of a bike chassis does offer a marginal reduction in carbon footprint, more than half of the estimated emissions of e-bikes comes from the production and operation of their batteries. And any e-bike, converted or not, is many times more efficient than any car.

For the e-bike curious, especially those who like to tinker, what the Swytch kit does offer is a low-cost, low-commitment alternative to an off-the-shelf ride. It’s a proposition that has proved especially popular in the U.S., which is fast eclipsing the U.K. as the company’s top market, according to Montague. He attributes that to a strong do-it-yourself culture: “It’s quite a fun little project to do.”