The kitchen no longer just a place for Japanese women 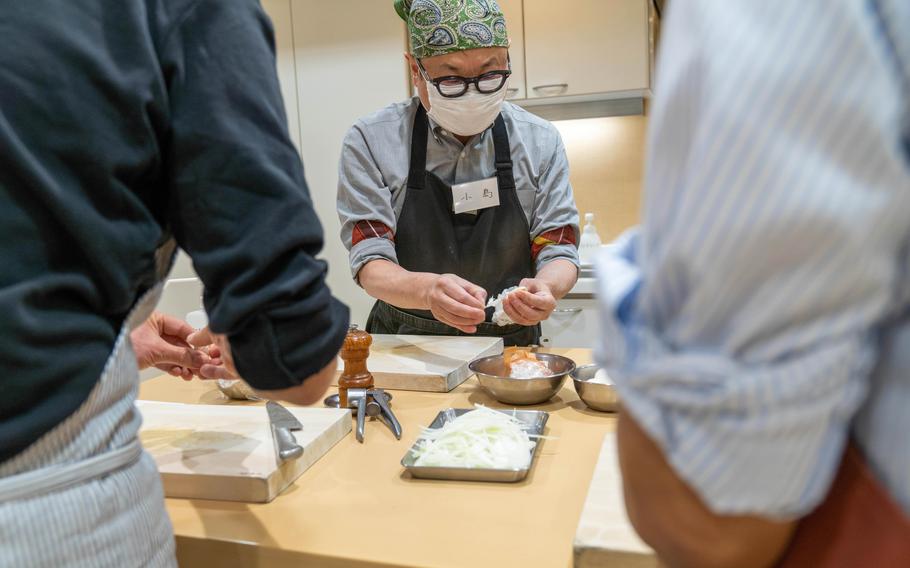 Students work as a team in the Better Home cooking class for men in Tokyo. (Taro Karibe/For The Washington Post)

Masahiro Yoshida hung up his suit jacket and pulled a pink apron over his button-down shirt. After avoiding the kitchen for most of his 65 years, it was time to cook.

As with most Japanese men, Yoshida’s mother prepared all his meals until he got married, when his wife assumed that role. But after he retired four years ago from his job as a government administrator, she proposed they share meal prep. Yoshida agreed but got lost making basic dishes. YouTube tutorials were confounding.

So like a growing number of older men here, he signed up for classes. His six-month course at the Better Home cooking school covered skills such as how to mince garlic, chop mushrooms and shop for meat — all integral for the stroganoff he would attempt before graduating.

“I had no idea how complex the cooking process was,” Yoshida admitted. 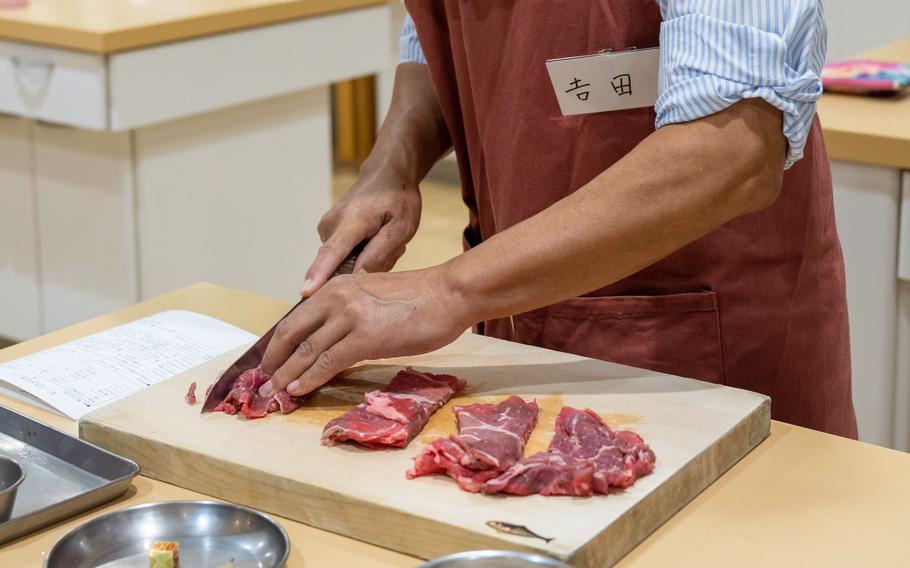 Masahiro Yoshida slices beef for the stroganoff that he and other students — all men, all seniors —are making in their class in Tokyo. Yoshida recently agreed to share meal prep with his wife. (Taro Karibe/For The Washington Post)

Strict gender roles have governed domestic life in Japan for generations. Men often retire without ever having held a paring knife or washed a dish. Those who lose a spouse often find themselves unable to do the most rudimentary chores. An old Japanese saying — “Danshi-chubo-ni-hairazu,” or “men should be ashamed to be found in the kitchen” — has spooked husbands from most any housework. Even those who wanted to help typically lacked the know-how.

Evidence of this isn’t merely anecdotal. According to a survey conducted by the Organization for Economic Cooperation and Development, Japanese men take on less household responsibility and child care than their counterparts in any of the world’s richest countries. On average, they spend just 40 minutes a day on the combination, five times less than their wives. Only 14% reported regularly cooking for themselves.

As the country ages, however, and the average life span for men stretches into the mid-80s, some women are drawing a line and declaring themselves done with picking up after their husbands.

“The biggest problem is that men don’t see themselves as the responsible party when it comes to housework,” said Yasuyuki Tokukura, who runs the nonprofit group Fathering Japan and advises the government on gender issues within households. The traditional division of labor persists despite the significant number of women now working outside of the home; indeed, dual-income households are more than twice as prevalent as those with single incomes.

Simmering resentments frequently come to a head once a man’s career ends and his wife starts to question the arrangement, Tokukura said.

“The power dynamic changes. The wife asks, ‘Why do I have to do all the housework if you are no longer bringing in the money?’“

These days, many women are pulling husbands like 65-year-old Yoshida into the kitchen. Yet the men must first learn the basics.

The government is willing to assist, with some community centers offering free classes to teach cooking, cleaning, ironing and laundering.

Motohiko Onoue is the founder of the home economics school Kaji Osu, though he tends to look more corporate than culinary in his starched shirt, navy slacks and leather dress shoes. On a Friday morning this month, he gathered a dozen students around a stove at a neighborhood center in Shiki, a city outside Tokyo, to demonstrate how to make healthy chicken nuggets from scratch. The session was part of a six-week course that addressed how to cook with miso, clean around stove burners and remove stains from clothing. 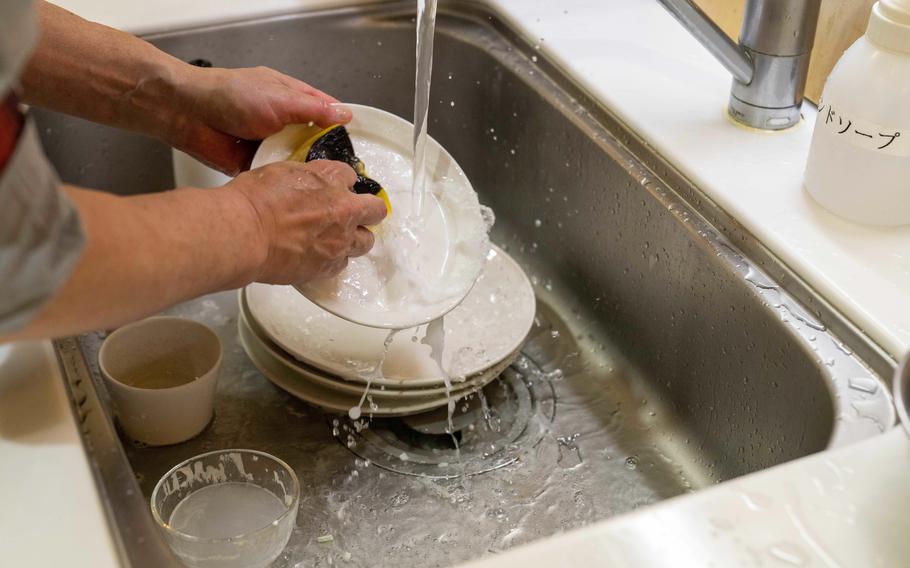 Cleanup is also part of the instruction in the Better Home cooking classes. (Taro Karibe/For The Washington Post)

When Onoue started his school five years ago, other men laughed at him. “A housework school for men? That’s ridiculous,” he was told.

Yet he saw a niche market with much potential. Attracting students wasn’t easy initially; only one man came to his first group lesson. That’s when Onoue decided to bring his lessons to the men, working with community programs to advertise the courses anytime retirees showed up with questions about retirement benefits or their national health insurance policies.

He even offers students private consultations to focus on the aspects of housework that they find most daunting. To encourage critical thinking, recipes don’t come with the usual step-by-step sequence.

“Men who are used to business thinking need a problem to solve. I give them the basic materials and instructions, and let them figure it out,” Onoue said.

These courses are also popular with men who suddenly find themselves widowed or divorced and don’t know the basics of self-care.

Takashi Kaneko, 74, decided to sign up after his wife died of liver cancer four years ago. He was living mostly on microwaveable foods and found himself desperate for company. Not only had his wife taken care of all the cleaning and cooking, on top of working as an administrative assistant, but she also curated his social life. After she passed, Kaneko realized he did not have many friends of his own.

He has learned how to host his adult children the way his wife once did.

“When my kids come to visit, it’s usually after they’re tired from work, and they want to relax. If their mother were alive, she would surely have cooked for them and made them feel at home, so I want to do the same,” Kaneko explained.

The classes introduced him to men in his suburban neighborhood outside Tokyo, who were trying to learn household skills, too. Five of them were fixing a meal recently, Kaneko standing tall in front of the stove and helming the frying pan as the others took turns placing mounds of minced chicken in oil.

“Don’t overdo it,” he warned 80-year-old Kikuo Yano, laughing as he rounded out the nuggets with a spoon.

Yano has been taking classes this fall to surprise his wife of 43 years.

“All this time my wife has done everything,” the retired architect acknowledged. “I haven’t done anything around the house. If I don’t know how to, I guess there’s nothing I can do. But if I learn how to do it, then it’s time I help.”

He now wakes up early to press his clothes. Ten times he has practiced a curry dish he plans on serving his family on New Year’s Day.

“You see this shirt?” he says, running his hands up and down the sleeve, a smile stretching across his face. “I ironed it myself.”