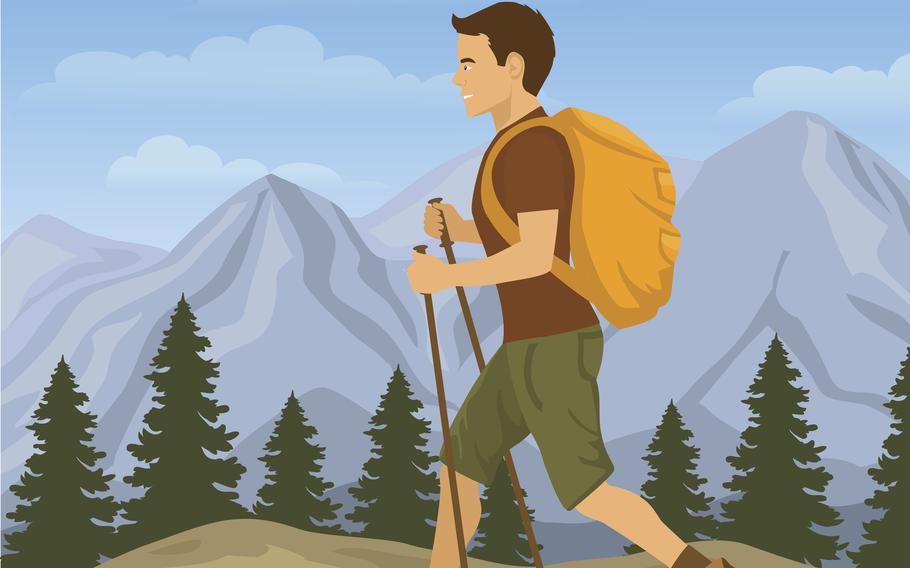 Hiking is a shared passion for Ellen and Keith Dobbins. Over their 25 years of marriage, they’ve hiked in more than 100 national parks and climbed many states’ highest peaks. It’s what they do together on vacation. But as they’ve aged — Ellen is 56 and Keith is 55 — they’ve diverged in how they hike. Ellen is a fan of trekking poles. Keith is not.

Trekking poles stir up surprisingly strong emotions among their proponents and opponents.

For many hikers, they provide much-needed stability and security, in addition to giving them the strength to ascend sometimes long climbs. Opponents, on the other hand, often eschew them in favor of simplicity. They like paring down the gear they tote and keeping their hands free to scramble over rocks. The question is, which camp is right?

By and large, it’s a matter of personal preference, but there are benefits to using them for some populations. For those who would rather not, there are ways to prevent dependence on them, if you’re willing to put in some work.

Ashley L. Hawke, a biomedical engineer at the National Institute for Occupational Safety & Health, became interested in the value of trekking poles when she sprained an ankle on a hike.

“Someone handed me a pair to use, and I was surprised by how much they helped in that moment,” she says. “I’ve always thought people looked silly using them.”

After that experience, in 2020, Hawke and a colleague reviewed scientific literature on the topic from 1980 to 2019. They looked at the relationship of using trekking poles on joint forces, physiological responses and balance, among other factors, publishing the results in Wilderness & Environmental Medicine. “All of the studies came to the conclusion that there is a general net positive to using poles versus not using them,” she says.

“I started using them about a year ago when I began taking serious hiking trips,” Baker says. “I immediately realized they gave me a sense of security on rocky and uneven terrain.”

Baker has taken several active vacations around the world over the past year, toting her poles for every one involving hikes.

“As I’ve aged, balance has become more of a central concern, and poles give me the sense of confidence I need,” she says. “There is no doubt they allow me to do more in terms of difficulty and distance.”

Ellen Dobbins likewise discovered the value of poles for her stability about 10 years ago when hiking through the Narrows at Zion National Park.

“We couldn’t see the bottom of the river where we were hiking, and I knew it could get deep,” she says. “We weren’t on stable ground so I felt more comfortable having poles to guide every step.”

Balance, which begins to decline as early as your 40s, is improved with trekking poles, Hawke says. “For many aging hikers, balance can be a limiting factor to getting outside and exercising, so the poles can be a gateway to the outdoors,” she says.

Other benefits turned up from Hawke’s review include a reduction in the ground reaction forces that extend up to joints when hiking, especially while descending hills — the poles take on some of that force.

“They’re particularly helpful on the downhills,” she says. “Psychologically, they feel like a friend helping you up and down climbs.”

Hawke’s review also revealed that delayed onset muscle soreness (DOMS) after long hikes was much lower for users of trekking poles than for those going without. Baker has appreciated the strength boost she gets from her poles. “On rigorous hikes, I use them to hoist myself up and over rocks,” she says.

Despite all the literature supporting the use of trekking poles, plenty of people still would rather not, including Keith Dobbins.

“I don’t want another complexity to my gear,” he explains. “I’ve already got a backpack, water, snacks, and I don’t want to add in poles.”

Even proponents admit trekking poles can sometimes be a hassle.

“When you hit a smooth or flat part of a trail, it’s a bit of a hindrance to carry them or stop to put them in your backpack,” Baker says. “You might want them 15 minutes later, so it can be a lot of back and forth.”

On a physical level, Hawke’s review found that using poles will actually elevate your heart rate more than leaving them behind, especially when going uphill, because they engage your upper body, as well.

“Some people might find that a bonus because they’re getting a better workout,” Hawke says, “but others don’t like the sensation of working harder.”

For those who prefer to hike without poles, with exercise, you can offset some of the age-related declines and other issues that make them appealing.

“Every senior I work with talks about having bad balance,” says Meghan Wieser, a certified strength and conditioning specialist at Maryland-based Recharge Modern Health & Fitness. “I’d argue strength and balance deficits are equal in the equation.”

Aging affects the vestibular, muscular and vision systems, all of which play a role in balance. Wieser recommends working all three with simple exercises.

“Start with movements that work your single-leg stance capacity, like slow marches, first in place and then forward and back,” she says. “Then add load with handheld dumbbells or kettlebells.”

You can also add moves called “farmer’s carries,” “suitcase carries” and “farmer’s marches” to the mix. For a “farmer’s carry,” hold a heavy dumbbell in each hand hanging at your side. Walk forward, keeping the weights a few inches out from your thighs. The same goes for a “farmer’s march,” only you’re slowly marching, not walking. A “suitcase carry” involves holding only one weight at a time, offsetting your balance as you move.

Squats, weighted step-ups/step-downs from a bench and working on foot strength can all make you a more confident hiker, Wieser says. With consistency, all will improve both strength and balance, making you steadier on your feet. Then it’s up to you if you’d like to wean yourself off the poles, or not, remembering that the longer you hike, the more fatigued your body will become.

For Baker, who does some strength training, there’s probably no going back.

“When I look around the trails and see people not using them, I’m amazed,” she says. “On these trips, the poles are my buddies.”