Barbiecore decor is having a hot-pink moment 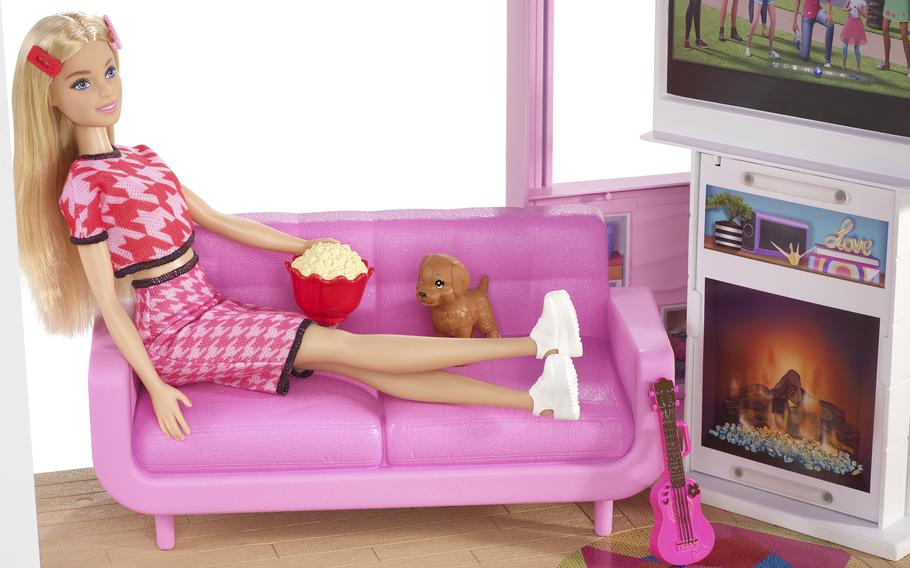 Barbie relaxes on her pink sofa in the latest Barbie Dreamhouse. Consumers are taking the icon’s pink girly-girl vibe and applying it to their own homes. (Mattel)

Heidi Marler’s taste in decorating has always gravitated toward pastels and vibrant pinks. She has a pink Chesterfield sofa. And the centerpiece of her kitchen is a pink Smeg refrigerator — alongside pink cabinets, pink walls and a pink microwave.

“My home is my happy place,” says Marler, who works as an end-of-life caregiver in Essex, England.

After a recent post of home photos on her Instagram, @home_n_tidy_with_heidi_, commenters declared her space very “Barbiecore.”

Since she debuted in 1959, Barbie has been an icon of fashion and mod decorating, as well as a symbol of fun. Now, with a live-action movie about her set to debut next summer, her look is everywhere, it seems. Barbiecore fashion is drenched in hot pink, and now that girly-girl vibe is seeping into living rooms, kitchens and bedrooms. 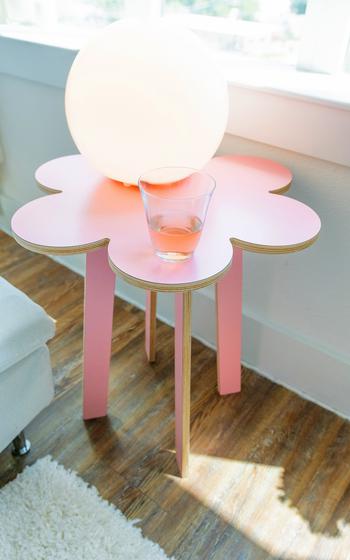 This table from the shop orbitanywhere on Etsy can be a component of Barbiecore. (Etsy/orbitanywhere)

“I didn’t realize my obsession was on trend,” says Marler, who was tickled pink by the news. “Barbie was the girl that could pull anything out of the bag. I would like to say she reminds me a little bit of myself.”

It’s been a tough couple of years, and consumers are ready to make a bold statement as they emerge from socially distanced lifestyles. That’s where Barbie comes in.

“People want to escape, and they are latching onto something colorful and nostalgic and playful,” says Laurie Pressman, vice president of the Pantone Color Institute. “When you think about color being a language that expresses what is taking place, this pink and its association with Barbie is about being daring and unafraid and taking chances.”

When photos of the upcoming Greta Gerwig live-action “Barbie” movie from Warner Bros. — with Margot Robbie in the title role and Ryan Gosling as Ken — trickled out earlier this summer, social media influencers were ready to embrace the beloved plastic doll and her look. As of Aug. 9, TikTok has registered 19 million views for #barbiecore.

Katie Sturino, founder of the beauty company Megababe, says she has always loved Barbie. Now, her Palm Beach, Fla., condo is an homage of sorts to the Barbie Dreamhouse.

“I don’t know if it seeped into my subconscious from when I was little, but I always loved pink,” Sturino says. In December 2020, she and her husband bought the place in Florida to escape pandemic isolation in freezing-cold Manhattan. Excited about finally having her own laundry room, she covered the walls in Wallshoppe’s “Rainbow Barbie” paper in the color bubblegum. She got a pink Lovesac sectional and installed pink-and-white-striped curtains. When she heard about Barbiecore in June, she texted a friend who also loves pink: “This is our time.”

“I have been ready for this moment, even though I didn’t know it was coming,” she says. Putting up a wall hanging like this is an easy way to get on the Barbiecore bandwagon. When it comes to paint, however, Andrea Magno, director of color marketing and development for Benjamin Moore, says to make sure to pick a shade that’s ”liveable.” (Etsy/WeAreLunarium)

When Etsy trend expert Dayna Isom Johnson saw the photo of Robbie behind the wheel of her hot-pink Chevy Corvette convertible, she knew that mood-boosting colors in home design would bubble up.

“Everyone started embracing that color,” Johnson says. “It’s ultrafeminine.” Searches on Etsy for hot-pink home and living-related items are up 21% in the past three months compared with that of last year, Johnson says. “It’s all about embracing those vibrant hues and trying to think back to nostalgic times, when life was a little simpler and sunnier and a little more carefree,” she adds. If you want to jump on the Barbiecore bandwagon, she suggests starting with something small, such as a vase, pillow or candle, because “it’s a very bright tone.” Etsy trend expert Dayna Isom Johnson suggests starting out with something small like a candle, pillow or vase when incorporating Barbiecore into your home.  (Etsy/Junebeginnings)

“It has broken away from that little girl kind of connotation,” she says. But Magno cautions that “a lot of colors may be fun for a skirt or nail polish, but when it’s color on the wall, it should be something livable.” She suggests taking a look at Benjamin Moore’s Peony, Hot Lips or Springtime Bloom.

The sort of mid-century-meets-feminine-power vibe of Barbie has been showing up in many venues. One example is in Season 2 of the popular series “Ted Lasso” on Apple TV+. The home of model-turned-public relations consultant Keeley Jones (played by Juno Temple), who happens to rock a high blond ponytail, is full of hot pinks, vintage mid-century furnishings and bold fabrics.

“The pink color palette in this set is a strong contrast to other sets’ color palettes, so it signifies that this is Keeley’s own space, her own identity,” says Kate Goodman, the show’s set decorator. “It emphasizes her femininity and also her boldness. It’s brave, brash in some areas, but the different shades of pink reinforce elements of her personality.” Goodman thinks that Barbiecore is an acknowledgment that Barbie really never went out of fashion.

Although that may be true, Kim Culmone, Mattel’s senior vice president and global head of design for Barbie and fashion dolls, says Barbie has always been a trailblazer. “She owned her first Dreamhouse in 1962, before women could open their own bank accounts.”

The original Dreamhouse was a mid-century model with slim-line furniture made of cardboard. Her latest Dreamhouse is still very modern, and it has an indoor/outdoor living focus, with a pink pool slide and a rooftop deck, because “Barbie needs a little spot for relaxing, since she does have over 200 careers, so she is very busy,” Culmone adds. Barbie’s style, she says, is timeless. “Barbie is always of the moment, because she continues to evolve.”

When Barbie turned 50 in 2009, designer Jonathan Adler created a 3,500-square-foot real-life Barbie Malibu Dream House in — where else — Malibu.

“There was a lot of black patent leather and white and pink,” Adler recalls. “And I had a chandelier made out of Barbie’s hair.” There was also a closet filled with dozens of pink shoes and rugs monogrammed with the letter B.

As for Barbiecore, Adler says, “the great thing about Barbie is that she is whatever you want her to be, from Barbie the surfer to Barbie the business executive.” In interiors, he says, Barbiecore “is a way for grown women to express their inner girl and a nostalgia for more innocent times.”

But beware of too much pink and too much Barbie.

“The difference between home design and your wardrobe — your clothes are very ephemeral. You can dress like Barbie one day and wear a Hillary Clinton pantsuit the next without a real great deal of investment,” he says. “Home decisions are more permanent. Translating the fantasy into reality should be done thoughtfully.”